Black & Decker’s HVFE2150L is the company’s entry-level cordless, bagless stick vacuum with ORA – Optimised Runtime and Airflow technology. This tech uses multi-stage cyclone chambers to spin out different sized particles with the aim of reducing clogging and loss of suction as the dust builds up in its near half-litre bin.

For versatile cleaning abilities the HVFE2150L can be used as a handheld cleaner, ideal for small jobs or taking out to the car, with its extension tube to replicate a cylinder cleaner or with the supplied turbobrush head for more serious upright-style floor cleaning duties. The 21.6volt battery gives up to 16 minutes of run time on a four-hour charge with LED indicators counting down your remaining charge. 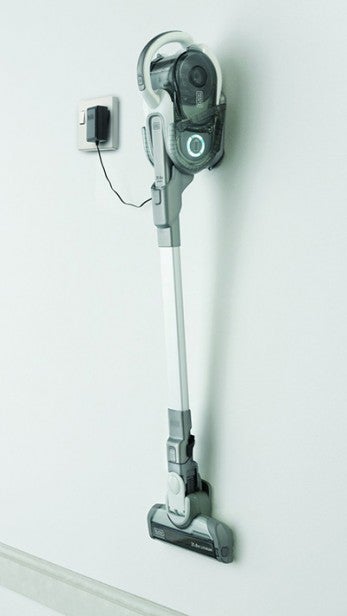 The heart of the HVFE2150L is a handheld cleaner with bagless cyclone technology. It promises to be light, compact and convenient, and can be left on charge ensuring it is always ready to go for quick clean ups.

At just 1.8kg, the unit should be as easy to use as Black & Decker’s original Dust Buster style cleaners from ‘back in the day’, but hopefully a lot more effective.

The ORA technology features three individual chambers culminating in 12 air-cyclone chambers to remove ever smaller dust particles. There is a small foam exhaust filter that is fully washable, ensuring there are no consumable running costs.

Its 0.45-litre bin is in on the bijou side for larger cleaning duties, with the dirt collecting in the bin and opposite behind a removable panel. But it’s fairly typical of small, cordless stick vacuums like this, and both segments clip off easily for emptying and washing out.

The handheld section features a pullout plastic tube, extending the reach by about 12cm, and a small clip on dusting brush. However, it is the larger add-ons that really expand the HVFE2150L’s scope.

In the box you will find a solidly built metal extension tube with an unusual flat profile and a flip-down dusting brush built in. Simply clip this to the main unit to reach ceilings and other neglected spots.

Flip back the brush and you can attach the main turbobrush floorhead, turning the whole ensemble into a compact and light upright cleaner. The beater bar itself is motorised, adding a little weight where you want it at floor level, and air-channels have been designed into the head to get suction to the carpet edge. The head has a fully articulating neck for manoeuvrability and tool-free brush removal for cleaning.

A large charging dock wall bracket is supplied into which the main body simply drops into, with the tube and head attached if desired, which itself connects to the wall-wart power supply. From flat, B&D recommend at least four hours between charges. There is only the one power setting for cleaning, which we recorded around 19 minutes run time using just the handheld unit and 14mins 30 secs with the powered turbobrush head running.

This isn’t all that long, but it’s only slightly less than the pricier Dyson V6 the Black & Decker is clearly modelled on. Vax’s cordless range lasts a little longer normally, though most of its models come with two batteries. 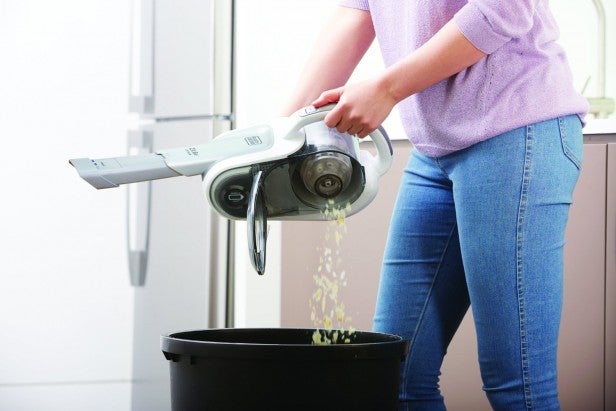 In handheld mode, the HVFE2150L certainly packs a fair bit of suction for a lightweight cleaner. Yet, despite this low mass, with the handle placed towards the back of the machine, it fees rather unbalanced in the hand and more unwieldy than its weight would suggest. Hold it at the very back of the curved handle to clean at arm height, desktops and sofa backs for example, and it will rotate forward unless you have a firm grip. Similarly, clip on the extension tube and it takes a fair hoist to raise it to head height to clean a high picture rail, for example.

The HVFE2150L really comes into its own in upright mode, where it feels much more comfortable in the hand – it’s well balanced and highly manoeuvrable. We nipped around a carpeted room in quick time using a gentle turn of the wrist to steer around obstacles. The easy manoeuvrability came in handy on the carpet test as, even with the turbobrush head in use, we had to go over some areas several times to pick up a significant amount of the test powder. 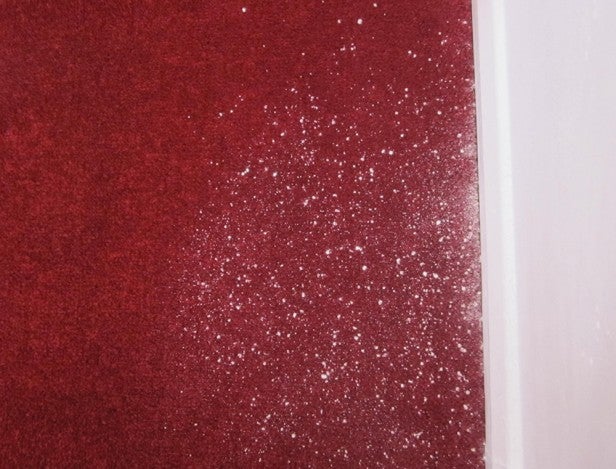 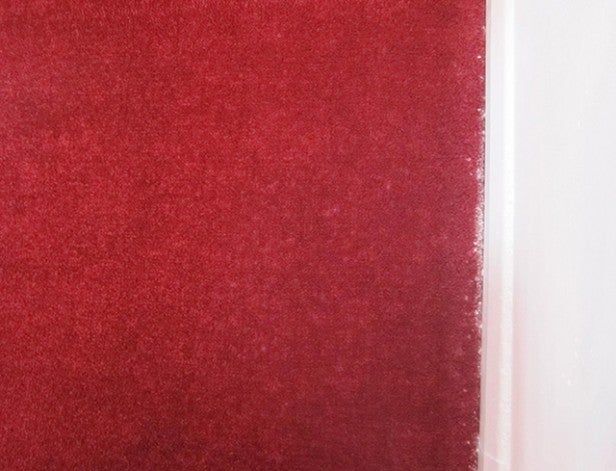 While this model does feel like it packs good suction through the small hand-held nozzle, a fair bit of that power seems dissipated by the wide floorhead, articulating neck and tubes. It certainly is enough suck to quickly pick up surface dirt, but you won’t get a deep down clean or be replacing your home’s main cleaner with this B&D model. It was little surprise then that the edge cleaning test results were only so-so – its effort is worse than rival machines, even some of the cheaper ones.

Out onto hard floors there is no way to turn the rotating brush bar off, so there is a minor danger that a trapped stone or piece of grit might scratch more delicate surfaces likes softwood parquet. The brush bar itself uses a mix of soft and stiff bristles, which in themselves are unlikely to mark a floor, but the softer bristles were already looking a bit battered by the end of the test.

Across a dusty hard floor with some pet hair too, the HVFE2150L proved very effective at picking up light debris and hair, made even easier by its excellent manoeuvrability. Measuring 79dB in handheld and 80dB with the floorhead attached, it is a fair bit noisier than some of its cordless rival, but quieter than many mains powered models. 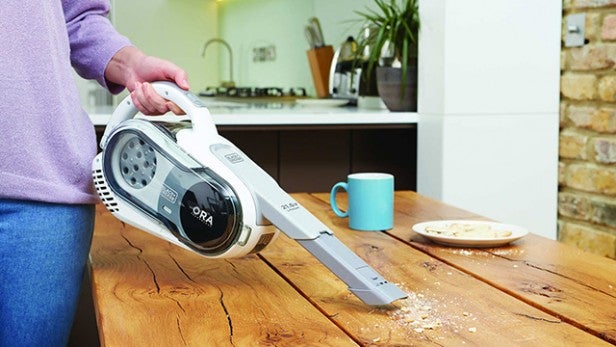 Being somewhat spoilt for choice in which mode to use the HVFE2150L on stairs, we plumped for a mix of a first pass using the tube and floorhead and then a second pass into corners and crevices as a hand held.

In upright mode it will take a little strength and dexterity to move it to each step, but the rewards are great. Once again its super manoeuvrability meant the floorhead was easy to navigate on stairs and it even got well into the corners of turning steps.

For surface dust and dirt, it picked up well and any residual dirt in corners and at edges was quickly dispatched on a second pass in handheld mode. We effectively cleaned a whole flight of carpeted domestic stairs in less than five minutes, with no wires to trip over and no ‘cleaner on step’ balancing-acts.

Having a proper motorised turbobrush head is a must for pet owners and the HVFE2150L turned in a respectable pet hair cleaning performance, clearing the test patch of mixed collie and Labrador hair in around 18 seconds.

That is not outstanding compared to mains powered upright cleaners or even some of the more pricey cordless competition, but it did the job better than most cylinder cleaners and quick pet hair clean ups are just a ‘reach and go’ away.

Over a week of testing we found we would pull out the Black & Decker every day when hair-ball tumbleweed would appear, rather than letting it build up for a weekly clean. 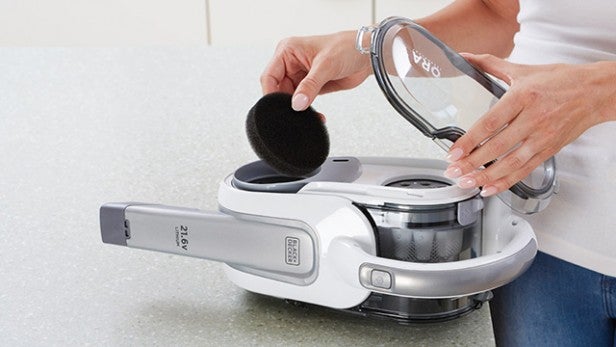 Maybe. This is an extremely versatile cordless cleaner and it’s more affordable than rivals, which makes it worth considering if you’d like cordless convenience but can’t afford the outstanding Dyson V6 Fluffy or Vax Air Cordless Lift.

But there are compromises. As a handheld it has good suction, but is rather unwieldy, while as an upright it offers superb manoeuvrability, but rather less suction power. It’s a handy jack-of-all-trades, but it couldn’t replace a corded machine like some better cordless models can. It’s useful for spot cleans, but it doesn’t have the power to clean deeply.

We’d also consider the Vax Air Cordless Switch H85-AC21-B at this price, which is easier to use in handheld mode and has a replaceable battery.

A solid, decent value cordless cleaner, but it doesn’t have the power to replace a corded cleaner.