For those who aren’t up to date with the latest anime, Black Clover is pretty much a love letter to the medium. Set in a world where magic is essential and even the most basic of chores are done using magic, the main character, Asta, is both orphaned and completely without magic while his childhood friend Yuno is magic as hell.

However, Asta has his own special ability: the magic of anti-magic which manifests – as is the magic of anime – with a bloody great sword that can both cut through and deflect magic.

Yup, Black Clover Quartet Knights is a game based on the anime equivalent of chucking every anime trope going into a blender with a healthy dollop of annoying screaming, before leaving it in the fridge to set overnight like a big, bland, jelly. A four on four team battler, letting you leather the opposing team with a variety of roles and spells. Think Dissidia, and you’re halfway there.

One of the best things about Black Clover Quartet Knights is the charming magicians, brought in from the show, who are written well enough to let you see your favourite character in the show brought to life.

While the story itself is as uninventive as the anime, the individual interactions feel incredibly true to the source material, an essential component of any successful attempt at this kind of game.  The story is set at some point after Asta beats Mars in the first dungeon that the fledgling Black Bull conquers. It is a little light on the specific time frame but the crew are aware of Licht and his nefarious group but Vetto isn’t a complete mess, so it has to be before the more recent episodes. 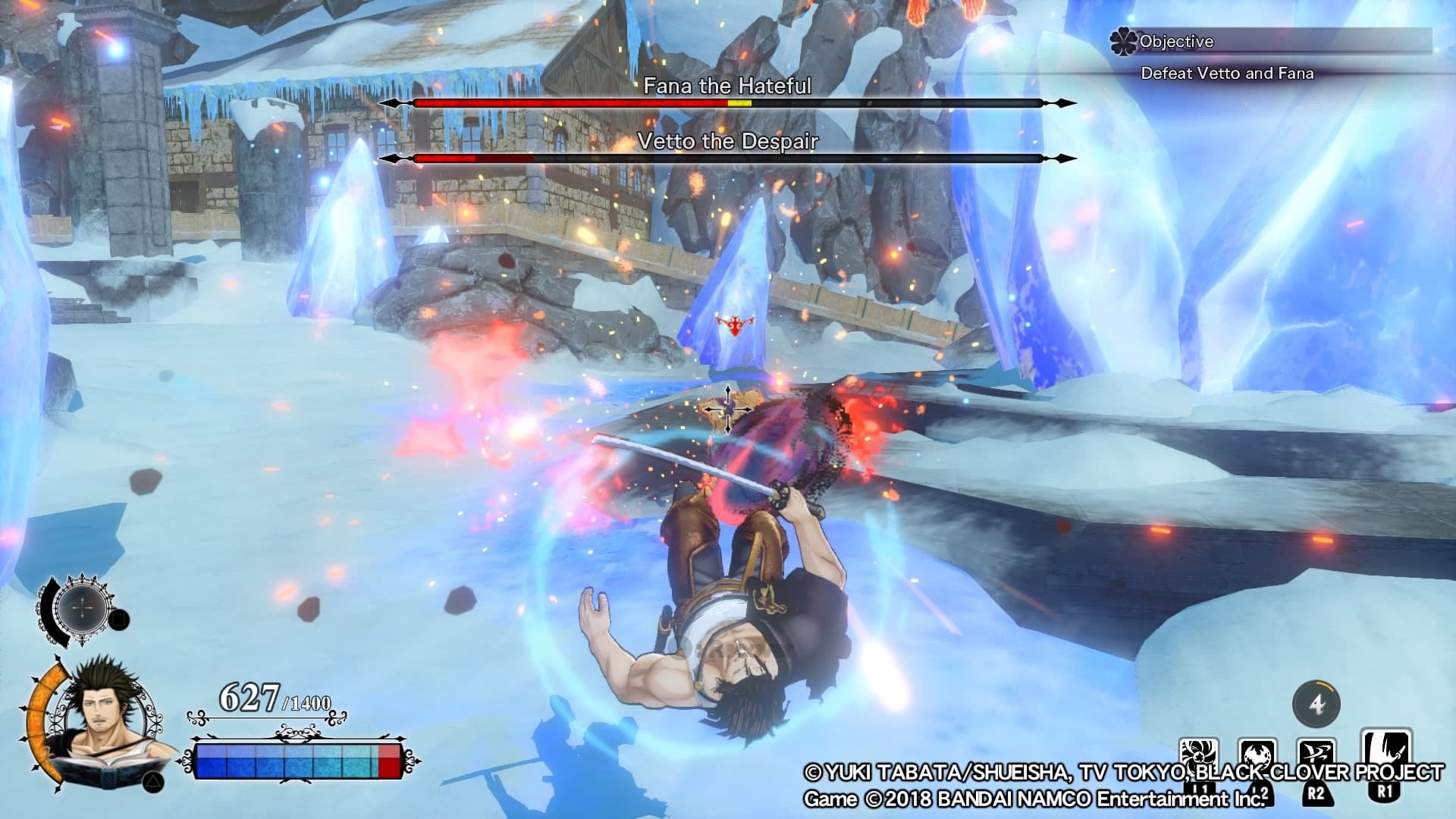 The big bad is a character not discussed at all in the main series, a dad possessing his daughter who he sent to the future because magic. Yeah, really.  Your ultimate goal is to find out what happened to cause the whole situation and to try and stop the kingdom from being destroyed. To do this you venture through ten incredibly short missions as Asta first, then eight equally brief ones as Yami. The campaign will maybe take you an hour and a half if you take your time. If you’re hoping to enjoy the solo aspects of Quartet Knights then you be underwhelmed.

Of course, this is being billed as a multiplayer game first so how does that work? Well, sometimes it just doesn’t, over the course of my playtime, I got to see a wide variety of disconnections before I would even get into a match and then a fair few stutters when the matches did actually manage to connect. Each one I played started off with you searching for a room and then waiting for players to join, then you wait with your breath held as you inevitably fall short of the full eight players and the spare spots are filled with bots. Were it not for the AI, there would not have been a single game online here.

Once you actually get into a game there are a few different match types but each one usually consists of going and standing in a spot and killing your opponents until you have taken the area/picked up the treasure/won the match. More often than not what actually happens is you’ll die instantly without even realizing you’ve been hit. There are many issues with the game but the most grievous one is the feedback. Whether you are hitting or being hit with a sword or a spell, you just won’t realise it unless you are paying attention to your own health bar or the numbers flying out of your enemies.

Attacks feel like they are being delivered in zero gravity to a cloud of helium. It isn’t just the attacks that lack weight though, the movement and the jumping are devoid of anything that remotely resembles satisfaction. The problems go far deeper than this though. The time to kill in each match due to this is so short it often leaves you wondering what actually happened, because you didn’t even realise you were being hit. It leaves you with an overwhelming feeling of apathy towards the whole experience. 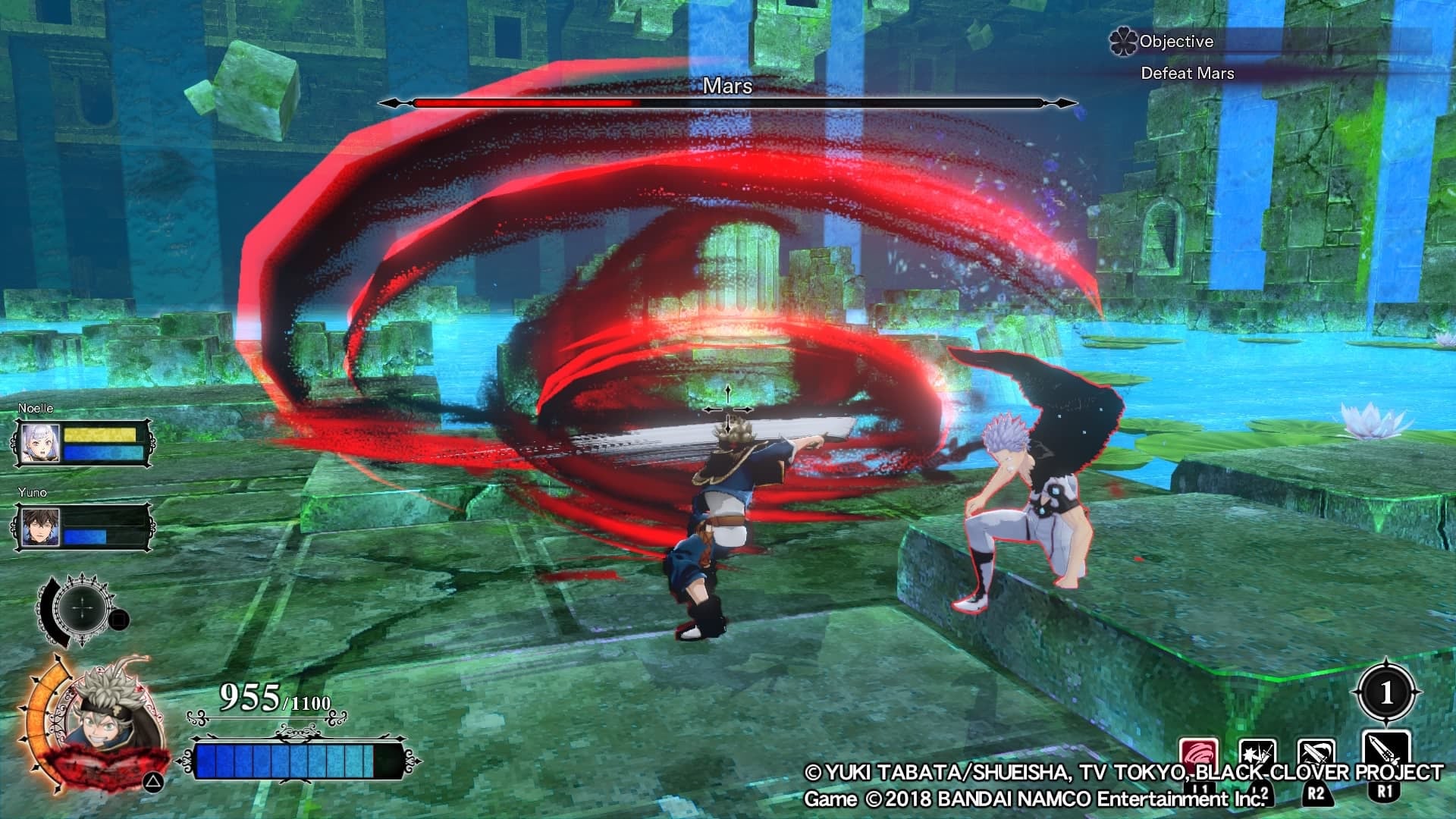 The characters are divided up into different classes, but these never feel particularly meaningful. The only real distinction between characters that mix things up is whether or not the basic attack is a ranged strike or a melee one. Otherwise simply holding R2 will have you pouring out damage on whatever crosses into your sights as the auto-aim takes over. As a player you will never feel like what you are doing matters, the moment to moment gameplay is without agency and as a result, the whole experience feels pointless.

This is all amplified due to the fact that the game itself looks quite good, the visuals are very easy on the eye and look like the anime has simply added an extra dimension and become interactive. Many of the cut-scenes are animated and have a fairly high level of quality to them as well.

This makes the sting delivered by the appalling mechanics that much more painful when it is delivered by something that looks so good. The inconsistencies just amplify the worst parts and dull the impact of the best parts, because ultimately the best parts are in the superfluous details rather than the foundation where they would be if this was a good game.

The game has a gooey smooth outer coating that contains a rough, unpleasant centre. Unfortunately, Black Clover Quartet Knights is much like Asta himself; completely lacking in magic.