The Bissell Steam Shot 2635E is a relatively inexpensive and effective compact steam cleaner, but it's let down by some usability niggles and poor-quality tool fittings.

What is the Bissell Steam Shot 2635E?

It’s compact and simple to use and produces plenty of steam for a small unit, but it isn’t without issues. It’s a little awkward to use and cost-cutting means a short hose and cable and poor tool fittings. It isn’t bad for small jobs, but a full-size steam cleaner will pack more cleaning punch. 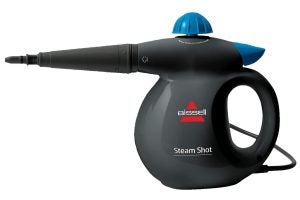 There’s no shortage of hand-held steam cleaners on the market, but the Bissell Steam Shot 2635E could be worth getting steamed up about. It’s affordable at less than £50, boasts serious 1kW-plus steam generation, and comes with a tool for almost every detail cleaning occasion. Okay, we’re not talking steaming acres of kitchen hard floor, but for grouting, windows, taps and even steaming creases out of clothes, the Steam Shot ticks all the right boxes.

The main steaming unit is solidly built. It tips the scales at a fairly hefty 2.3kg but, being so small, it doesn’t pull too much on your wrist in use. The fair-size 360ml water reservoir has a robust cap, with a confidence inspiring brass thread and safety pressure release valve. 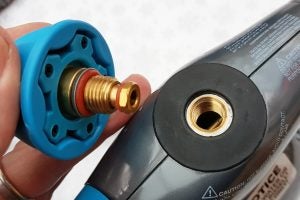 A quarter-turn bayonet fitting at the front accepts the short tool mount cone or the 0.8m flexible hose. The mount fits onto the end of the hose and accepts any one of the eight cleaning tools supplied. Slightly confusingly, the quarter-turn bayonet on the steamer body is marked by a single line and a double line. That might make you think there are two levels of steam, but it just marks where you line up the tool mount.

The setup is as simple as filling up, powering on and waiting for the little red “heating” light by the handle to go out. That should take no more than about two minutes. The light blue protrusion above the handle is the trigger, complete with a lock-release button to prevent accidental steaming. Our sample unit’s trigger was a little stiff and it’s a fair way up from the handle, so those with smaller hands may struggle a little. 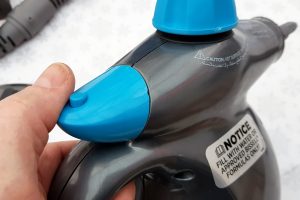 The tool roster is comprehensive. You can use the mounting cone bare for a direct jet of steam, or push on any one of the supplied attachments. The angled concentrator nozzle should be good for getting into awkward places, the grouting tools feature a row of very stiff bristles, and the scraper tool jets steam both sides of its 3cm wide blade. 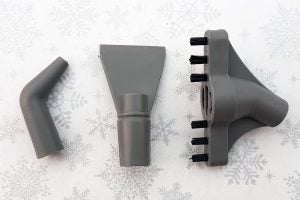 A trio of small, round brushes features a circle of very stiff bristles surrounding the steam outlet. They’re colour-coded for your specific use rather than being any different. 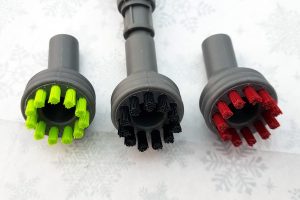 A wider, flat tool with five steam outlets is designed to steam fabrics to freshen them up and remove wrinkles. The window squeegee tools clip over the fabric tool, adding a good size rubber blade. 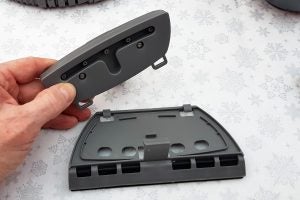 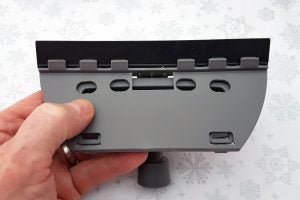 The kit comes supplied with a small measuring jug to help fill the Steam Shot without spillage, and two good-sized microfibre cloths. These are used to mop up the excess moisture behind your steam-cleaning activities. 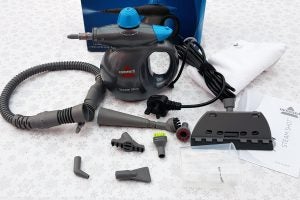 Note number one: do not overfill. We simply put the unit under that tap and filled it up. That resulted in the top-valve dribbling water as it heated up and the nozzle shooting hot water rather than steam for the first minute or so. As stated in the manual (which we didn’t read first, naturally), you need to use the measuring cup provided to hit the max fill of 360ml or 6.6oz as the jug is labelled.

Suitably filled, the Steam Shot heats up in almost exactly two minutes, with the heater switching on and off in use to keep the steam flowing. 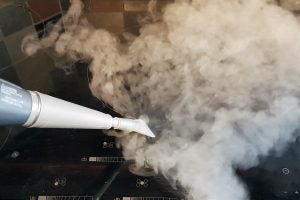 The amount of steam produced is impressive for such a little unit, and the stream remains fairly constant. On long steams of over a minute, the Steam Shot loses a little pressure – but a few seconds’ pause for it to heat up sees the initial steam surge return. It isn’t anything like as potent as a full-size steam cleaner with hose and nozzle attachment, but for a small unit it packs a steamy punch.

We had success with the concentrator nozzle on grime around the taps and the grouting tool worked well in the shower. 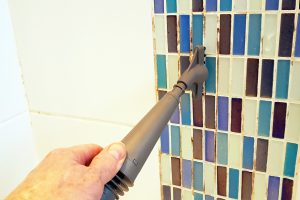 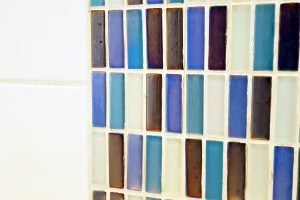 As with all steam-based grouting cleaners some elbow grease is required with the brush, plus you’ll end up with a lot of dirty water run-off. While not the fastest steam cleaner for grout available, the Steam Shot certainly did the job. 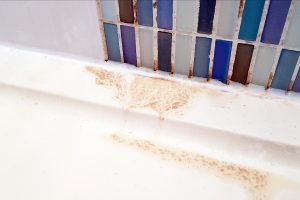 With the squeegee mounted directly onto the main unit it starts to feel rather weighty after a couple of windows yet, with a little buffing help from the microfibre cloths, results were sparkling. 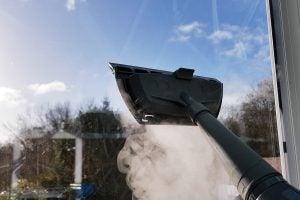 The overall experience isn’t without its niggles, though. The main unit is weighty and feels it on longer cleans, the trigger is quite a reach from the handle, and 360ml of water doesn’t last very long. Moreover, the Steam Shot needs to cool almost completely before the safety cap can be removed for a refill, so expect plenty of tea break opportunities if cleaning a large area such as a whole shower.

The small base area of the Steam Shot means it’s quite unstable if not being held, so the hose can easily tip it over. That makes cleaning a two-handed affair when the hose is attached, leaving you no spare hands to mop up the moisture without stopping. Since a short pause does reinvigorate the steam production, this isn’t necessarily a bad thing, but it does increase the time it takes to do a job. 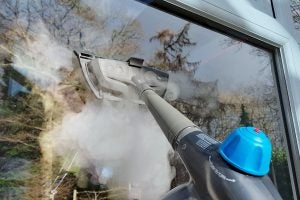 More concerning is the bayonet attachment of the tool mount and the push-on attachment fitting; neither are very secure. The bayonet doesn’t have a spring or lock in place, so it’s far too easy to spin off the tool mount accidentally. This is less of an issue when the mount is attached directly to the steamer body, as you simply don’t twist and turn as much. With the hose attached, reaching into awkward corners or twisting at an angle kept causing the tool mount to loosen from the hose bayonet.

While we were fighting to keep the tool mount in place, the concentrator nozzle blew off with the steam pressure. Perhaps we hadn’t pushed it firmly home. Yet as the O-ring seal and plastic fittings start to wear, we can  see the connection weakening and the pop-off issue only becoming worse. If you push the tools on firmly and keep an eye out for wear on the O-rings, hopefully this won’t be too much of an issue. 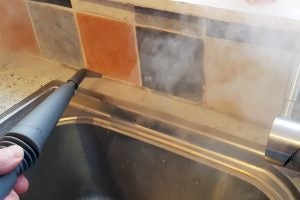 After several weeks in use, we had become used to the Steam Shot’s quirks: fill only with the jug, frequently pause for the steam to regenerate, and make sure the tools are pushed firmly home. As such, it’s an effective little steam cleaner. The tools are varied and, while the brushes were starting to look a little battle-weary, the squeegee tool and fabric steamer continued to impress.

For small cleaning duties, the Steam Shot is affordable, well featured and offers plenty of tools. Steam generation is great for a hand-held model, and the main unit is robustly built. Yet the Steam Shot shows its budget-based design fairly quickly. It’s a little heavy, a little awkward and limited by a short hose, short mains cable and small tank. The cheap push-fit tool fittings concerned us most, as the tool mount, in particular, had a propensity to loosen in use.

The Steam Shot doesn’t have the cleaning punch of a full-size steamer, then, but it works well for smaller jobs, is easier to store and quicker to get going. As such, we found it becoming a default tool for mould around the bath taps, scraping the ceramic hob, or (for pet owners) quickly cleaning nose prints from the patio door glass.