There are two versions of the Biostar X58; there’s the high-end TPower X58 which costs £215-£218 or you can save £15 and choose the TPower X58A that we’re reviewing. The difference in specification between the two models is fairly small as most of the features are shared by both motherboards. They both have three long PCI Express slots that support both CrossFire and SLI although things aren’t quite as simple as they appear. Sure, you get dual x16 PCIe 2.0 slots but the third slot only supports four lanes of PCI Express 2.0 so we’re not really talking about triple graphics slots. 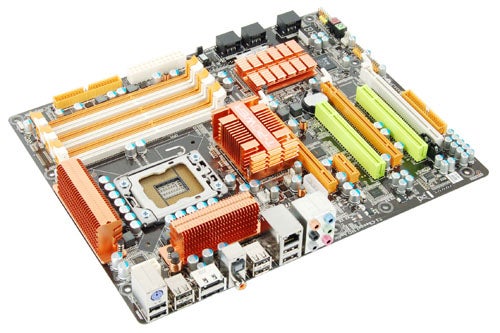 Most of the features are provided by the X58/ICH10R chipset so there are six memory slots that support DDR3 memory up to 1866MHz in triple channel mode and six SATA II connectors with Intel RAID. You will recall that X58 doesn’t support PATA optical drives so every motherboard manufacturer under the sun adds a controller and Biostar has plumped for the JMB363 which supports an ATA133 connector as well as two eSATA ports on the I/O panel. That’s a reasonable choice as you surely don’t need more than six SATA ports. However, to include two eSATA ports on the I/O panel seems a little overzealous.


The back panel is also home to eight USB 2.0 ports which is a goodly number but you don’t get any brackets in the box to plug into the two USB headers on the board so you’ll have to use case mounted ports for card readers, mobile phones and the like. What we would have liked, of course, is a Firewire port or two but that requires an upgrade to the TPower X58 which comes with a Firewire port, a header for a second Firewire port, a second Gigabit Ethernet port and heatpipes to link the coolers on the chipset.

We mentioned that you don’t get a USB bracket in the package but the fact is that you get very little besides the motherboard. There’s an SLI bridge but no CrossFire bridge, one IDE cable and four SATA cables. £200 really doesn’t go far these days.


Another quirk of the Biostar X58A is its name which is, in full, the Biostar TPower X58A v5.0 and we have no idea where that version 5 at the end comes from. We’re waiting to hear from Biostar on the subject but one thing is for sure, we doubt that there have been four earlier versions of any Core i7 motherboard on the planet. 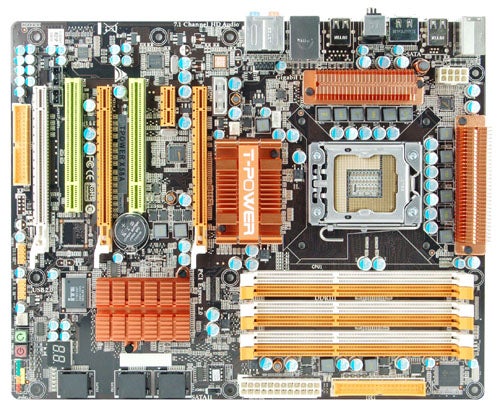 Plugging the Biostar together is a pleasingly rapid process as the layout is very good indeed. The power connectors are at the edge of the board, the six SATA ports are laid down and the passive heatsinks on the chipset and power regulation hardware are reasonably low in height and don’t get in the way of your CPU cooler.

We had a horrible moment when the power was connected as the Biostar appeared to be dead. The illuminated micro buttons and POST debug display remained dark but in fact all was well and the X58A sprung into life when we pressed the Power micro button. It’s just that the buttons remain dark until you press one, unlike many motherboards which are like the Blackpool illuminations even when your PC is turned off.


Once the Biostar was running we were struck by a sense of déjà vu and then it came to us that it bears more than a passing resemblance to the MSI X58 Pro. 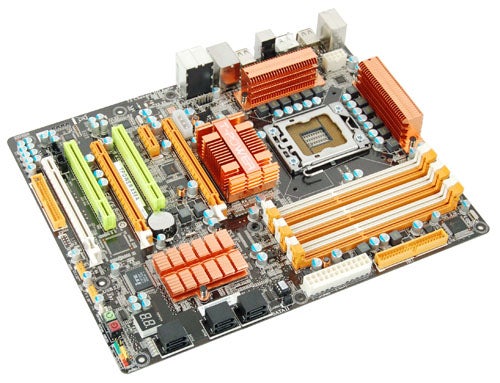 This is interesting as Biostar’s marketing material compares the TPower X58/X58A to the Asus P6T, the Gigabyte EX58-UD3R (OK we did the UD4P), and the MSI X58 Pro so we’re in a good position to make a judgement about their relative merits. Biostar makes a song and dance about the 12-phase power regulation hardware on the TPower X58 and we have to admit that it does overclock impressively well, provided you do a bit of work and increase the voltages and the CPU clock multiplier.


If you take the lazy approach and use the automated Over-Clocking Navigator in the BIOS we doubt you will get very far. There are three settings – Normal, Auto and Manual – and once you engage Auto mode you have three further choices that follow the trusty automotive theme. The V6- Tech Engine raises the base clock from 133MHz to 135MHz (why bother?), the V8 setting raises it to 140MHz and the V12-Tech Engine changes the setting to 145MHz.


We increased the CPU core voltage from the default value of 1.22V by adding +0.20V as we wanted a value around the 1.45V mark. Biostar uses a colour coding system for voltages that steps through green, yellow and red. The CPU voltage is relative and is set from a reference point while the other voltages are set as absolute values but in each case the colour codes are amazingly daring. The CPU voltage is green up to +0.300V, yellow up to +0.400V and goes to a maximum of +1.26V. Gulp. 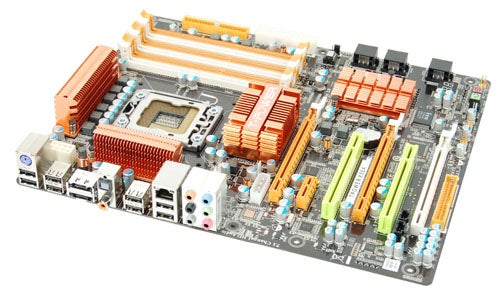 RAM voltage is green to 1.70V and yellow to 1.90V which seems horrendously high as standard practice with Core i7 is to stay below 1.65V to avoid blowing your CPU to Kingdom Come.


Raising the clock multiplier on our Core i7 965 Extreme from 24x to 31x increased the clock speed to 4.13GHz but when we tried to overclock by increasing the base clock to 23 x 175MHz = 4.03GHz the system restarted.


Biostar includes three utilities on the driver disc. The BIOScreen utility updates the BIOS within Windows, the Green Power Utility monitors CPU usage, wattage and temperature and TPower 2 allows you to change overclocking settings within Windows. Although TPower 2 is undoubtedly very powerful it is also confusing as there is no explanation about the function of the various buttons. The software adds yet more option on top of those in the BIOS such as V3 and V15 settings for the Tech Engine but we would rather have a utility that offered fewer features in a clearer and more useable manner.


The TPower X58A slips in under the £200 price tag and it overclocks impressively well but the list of features is too short to win us over.