We heard some scary news about the new Biostar TPower I45 some weeks before our review sample arrived from Taipei. According to Nordic Hardware, an Australian by the name of ”youngpro” has run the TPower I45 with a front side bus of 724MHz which raised the clock speed of a Core 2 Duo from 3.16GHz to just over 5GHz. There’s no mention of the voltage settings or cooling system that he employed but those numbers certainly raised our expectations.


Once the motherboard arrived our initial impressions of the TPower I45 were mixed as it looks rather dull. The passive cooling system that links the Northbridge and power regulation looks perfectly competent but doesn’t have the ”bling” quality that you get with the MSI P45 Platinum. The PCI, PCI Express and memory slots are coloured in rather boring tones of green and orange, the power and reset micro buttons look cheap and nasty and the POST code display is rather basic, though they are still welcome extras for a relatively cheap board. 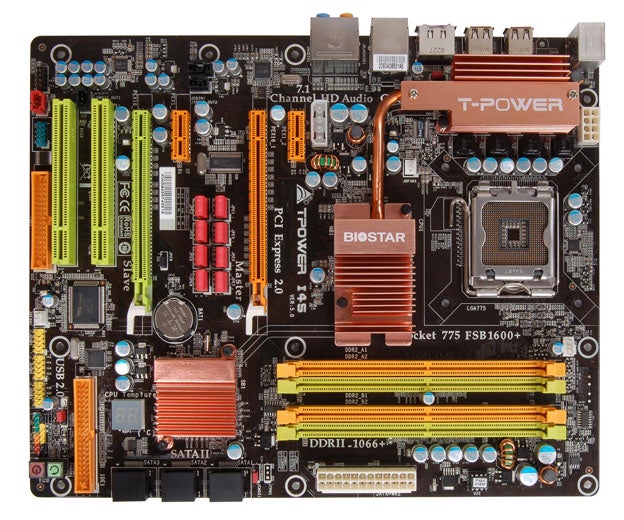 Those are fairly minor points but first impressions count and as you look more closely at the TPower I45 you’ll spot other aspects of the design that will cause you to raise a quizzical eyebrow. The floppy connector is at the foot of the motherboard below the bottom-most PCI slot, which is a common sin that is admittedly becoming less of a problem as we move away from floppy drives. There’s no way that the IDE connector should be located at the bottom of the board near the header connections, though -especially when there’s plenty of room next to the main power connection. We also reserve a special touch of annoyance for the micro buttons as they only light up once you press the power button to start the PC. Why can’t they light up when the mains power is turned on so you can spot them inside your case?


There’s one final quirk of the layout that looks completely out of place on a P45 design. Between the two PCI Express graphics slots you can see eight red blocks that look as though they might be lights but in fact they are jumpers. If you want to change from a single graphics card with 16 lanes of PCIe 2.0 to CrossFire on two slots with eight lanes each then you have to move all eight jumpers. It’s not the sort of job that you’ll perform more than once or twice in the life of your PC but even so it’s a surprisingly primitive system compared to other motherboards that use a digital switch.

Biostar supplies a bracket with coaxial and optical S/PDIF outputs to expand the six mini jacks on the I/O panel but these hardly make up for the otherwise basic connectivity of the rest of the board. There are two PS/2 ports for mouse and keyboard, Gigabit LAN and two eSATA ports. You only get six USB 2.0 ports where we prefer eight or more however they are arranged in three widely spaced pairs which does at least make them very accessible. Particularly strangely, there are no Firewire ports or headers for case-mounted ports.

A cooler is included that screws on top of the passive cooler on the power regulation hardware. Biostar calls this the Cooler Harbor, for some inexplicable reason. It’s a copper cooler that sucks up heat from the circuitry below from where it’s then blown away by a 70mm fan. The idea is simple and the cooler looks very effective but the surface on top of the power regulation cooler is shaped so you have to mount the Cooler Harbor with the fan on the CPU side, which is something we weren’t able to as it fouled our Zalman CPU cooler. It’s a CNPS8000 with a 92mm fan, which isn’t especially big, yet it prevented us from adding the active cooler to the Biostar. In the end we just used a case fan instead.


Once we’d installed Windows Vista on the TPower we tried to install the software that comes in the package. First we installed the UpBios utility, which we used this to update the BIOS from a file we downloaded from the Biostar website, and it worked perfectly. Next we installed the TPower II utility. This is a Windows-based utility that allows you to overclock without messing around in the BIOS. Unfortunately, although the software seemed to install correctly, in 32-bit Vista it wouldn’t run.


We turned to the BIOS and saw that you can either overclock manually or you can use automatic settings that are given a race engine theme. The V6-Tech Engine raised the 333MHz front side bus of our Core 2 Extreme QX9650 to 340MHz, the V8-Tech Engine setting raised it to 350MHz and V8 resulted in 360MHz which gave a trivial, though easy, increase in speed. 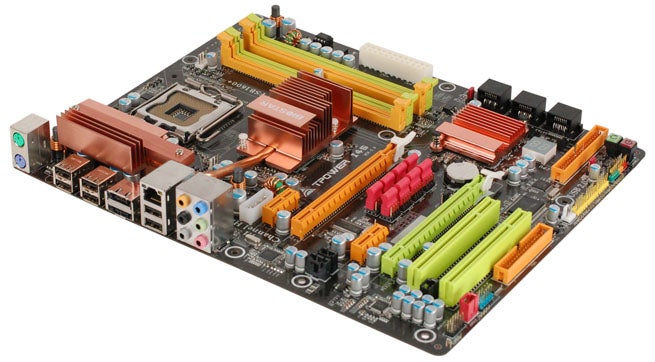 Manual overclocking gave far better results but we had to work harder than we would have liked to get the Biostar to run at high speed. On Auto settings the memory ran at 800MHz and we were unable to get it to run at 1,066MHz even though this speed is offered in the BIOS. We checked and double checked that the RAM voltage was set to 2.1V which is a laborious process as you have to enter voltage settings, raise it by the appropriate amount (in this case +0.2V) save settings and restart. Then you can use hardware monitoring to check the new voltage is correct (2.1V) and then select a DDR2 RAM speed, except that any speed apart from Auto would cause the system to freeze.


It was a similar story with the other voltage settings as P45 is far fussier than P35 or P965 ever was. The key figure is the Northbridge voltage which needs to be left at 1.2V for front side bus settings below 400MHz, although you can raise it to 1.3V for a front side bus up to 500MHz. If you’re shooting above 500MHz you can go for a ceiling of 1.4V which is a tiny figure compared to the 1.7V we often fed into a P35 Northbridge.


Feeding more power to the CPU was a strange process as the lowest settings supply less voltage than standard to the processor and then climb to zero and positive figures. We found that the settings disagreed with the hardware monitor such that an increase of +0.05V resulted in a drop of 0.05V and we had to adjust the CPU Voltage by +0.15V to raise it from 1.30V to 1.35V which was all very laborious.


Our results were nothing like the 700MHz front side bus claimed by the Antipodeans although we got out Core 2 Duo E8500 running reliably on a setting of 7x530MHz for a speed of 3.71GHz which is a healthy enough overclock but a long way short of 5GHz.


When the TPower I45 goes on sale in a week or too we expect it to cost £99 which may be discounted to £85. That’s a reasonable price for a P45 motherboard but it’s hard to see why you’d prefer the Biostar to an Asus P5Q Pro, a P5Q Deluxe or an MSI P45 Diamond unless you have your heart set on some extreme overclocking and have a great deal of patience and time.