As the model suggests the Biostar TA790GX XE uses an AMD 790GX chipset that supports the AMD Phenom processor. We’ve already reviewed a couple of 790GX motherboards, namely the Asus M4A78T-E and MSI 790GX-G65, and think it’s a good piece of silicon. In essence the 790GX is a 790FX with the addition of a Radeon HD 3300 graphics core which includes a superb movie decoder and comes with support for VGA, DVI, and HDMI monitor outputs.


You might expect that a 790GX motherboard would be a small highly integrated piece of hardware but our experience is that most 790GX models are based on a 790FX design with the addition of the graphics outputs on the I/O panel. This means that a typical 790GX motherboard has dual PCI Express graphics slots that support CrossFireX along with Hybrid CrossFire, whereby you can utilise the integrated graphics together with a graphics card. This is dead handy if you’re building a budget gaming PC in a tower case and you fancy a combination of 790GX and Phenom II but it’s not so great if you want a small, compact PC or a discreet Media Centre. 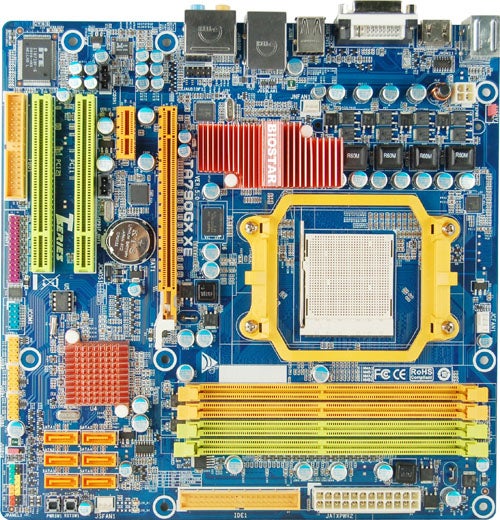 Enter stage left the TA790GX XE. Biostar has, for the first time on a Phenom II motherboard, used the Micro-ATX form factor (244mm x 244mm) instead of regular ATX (305mm x 244mm). The trade-off is that the TA790GX XE only has one PCI Express 2.0 graphics slot, so you can forget about CrossFireX, but that’s the only obvious deficit on the features list.


‘Hurrah!’ you may think ‘This is the motherboard for me.’


Yes, the TA790GX XE packs in most of the features that you want; decent integrated graphics with DVI, VGA, and HDMI sockets, support for most current AMD processors, a PCI Express x16 graphics slot, Gigabit LAN, and 7.1 HD audio. However, it also has some questionable aspects.


The first point is that the processor socket is AM2+ rather than AM3, which is good in the sense that it supports a long list of AM2+ or AM3 processors. However, it does not support the one very processor that we originally chose which is the Phenom II X4 955. We spotted the problem when our 3.2GHz powerhouse ran at a sloth-like 800MHz so we switched to a Phenom II X4 810.


The downside to the AM2+ support, aside from more limited future compatibility, is that the four memory slots support DDR2 rather than DDR3. The consequence of this is that you are obliged to pay slightly more cash for memory that runs at DDR2-1066 rather than DDR3-1333 and it also requires higher voltage. 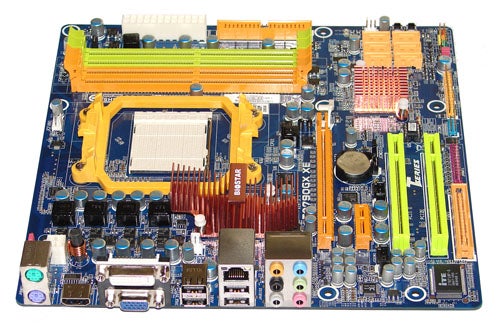 Another gripe is the list of ports and connectors as there are only four USB 2.0 ports on the I/O panel and while there are headers on the board for six more USB ports there are no brackets included in the package. We are also unhappy about the absence of a digital audio connector as it means that anyone using the Biostar in a Media Centre will be forced to connect the audio over HDMI or buy a separate sound card.


Also missing are eSATA and Firewire ports but these come firmly under the heading of ‘you pays your money and you takes your choice.’ Certainly, we don’t regard Firewire as an essential feature and that is especially true with a motherboard that is as cheap as the Biostar. When we reviewed the MSI 790GX-G65 it was priced at £115 and the cost has now dipped below £100. By contrast the Biostar TA790GX XE costs less than £73 which is very appealing when you consider that a Phenom II X3 710 costs £92 so you can buy your motherboard, processor and memory for £200.

The layout of the TA790GX XE isn’t ideal, which may be due to the space limitations of the Micro-ATX form factor. The Northbridge is located on one corner of the CPU in line with the four-phase power regulation hardware while the frame for the CPU heatsink is squeezed between the passive cooler on the Northbridge and the memory slots, and the cooler looks worryingly small. We found that our Zalman CNPS9500 cooler overshadowed the first memory slot and meant that we couldn’t install a module of Corsair Dominator memory in that slot.


The two micro buttons for Power and Reset are located in one corner of the board with the six SATA ports located inboard of the buttons. Along the foot of the board there are front panel headers along with headers for six case mounted USB ports and then we come to an array of legacy connectors with a header for a Serial port, another for a Parallel port and finally we have a floppy connector.


Our first job when we tested the Biostar was to download a BIOS update. It’s a two-stage process where you install a Windows based utility which in turn downloads and installs the BIOS file. 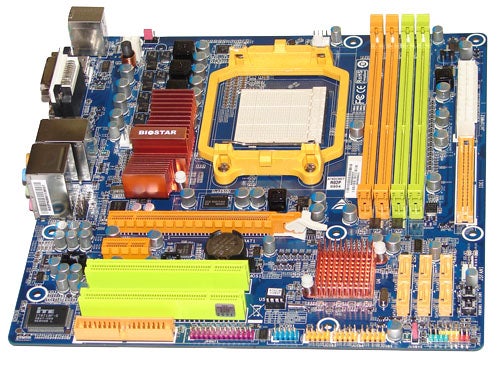 Once we’d done that we raised the memory speed from the default 800MHz to 1,066MHz which involves a small amount of dabbling in the overclocking section of the BIOS and we were ready to put the Biostar through its paces. With the Phenom II X4 810 running at standard clock speed the Biostar is noticeably slower than the MSI 790GX-G65 when you use the integrated graphics. Plug in a Radeon HD 4890 and the scores in 3D Mark Vantage level out but in PCMark05 the Biostar pulls ahead of the MSI by a narrow margin. It appears that the MSI works better with the integrated graphics thanks to its use of DDR3 system memory.


Even at standard clock speed we found the temperature of the chipset was higher than we liked so we installed a case fan to ensure there was airflow across the passive cooler.


Overclocking with the Biostar is a fairly simple process. We stuck with the traditional method of working in the BIOS rather than using the Biostar Windows utility as the BIOS offered all the features that we needed. We disabled Cool ‘n Quiet, increased the CPU and Uncore voltages and then raised the base clock speed in a series of steps. We were able to overclock our 2.6GHz CPU to 3.45GHz with a base clock speed of 265MHz which is fairly impressive however when we went to 270MHz the system froze and we had to clear the BIOS.


Overall we found that the TA790GX XE delivered impressive performance but we were unconvinced by the list of features on this Micro-ATX motherboard. It will serve reasonably well in a basic desktop PC, especially if you have case mounted USB ports, but it doesn’t seem to be much cop if you’re building a Media Centre as the passive cooler on the chipset is too small and the lack of digital audio is a surprising oversight.


Biostar has delivered a strange mishmash of a motherboard in the TA790GX XE, mainly because it lacks some basic features and doesn’t have a great layout. However, while we’re not entirely won over by its charms there is no denying that it is very cheap and is still perfectly capable.