Available on Xbox 360, PS3, PC (version tested)
It turns out that not having had time to play Bioshock Infinite: Burial at Sea – Episode One when it came out last November was a very good thing.  Experienced on its own, the first episode is a beautiful but painfully brief slice of Bioshock, featuring some of the weakest gameplay in the series and coming to an abrupt if gob-smacking end.

As a prologue to a longer, superior episode, though, it actually makes more sense.

In case you don’t know, Burial at Sea is a single-player DLC campaign for Bioshock Infinite, which takes us back to the original setting of Bioshock, Rapture. The action kicks off with private investigator, Booker DeWitt, contacted by a mysterious young woman, Elizabeth, with information on Sally, the child he looked after long ago.

Fans will, of course, recognise Booker and Elizabeth from their Bioshock Infinite incarnations, but here things are different. Booker seems oddly passive and unknowing, just another disaffected resident of Rapture trapped many fathoms below.

Meanwhile, Elizabeth seems manipulative and strangely aggressive; she clearly knows what’s going on, but that doesn’t mean she’s going to tell you anything – at least until the time is right. 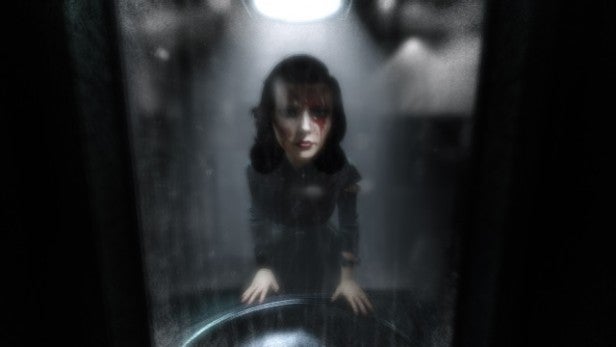 Burial at Sea’s biggest draw is that it’s the first game to show you Rapture before the fall, and a Rapture remade for Bioshock Infinite’s upgraded Unreal 3 engine to boot.

Certainly, Andrew Ryan’s underwater marvel has never looked better, its Art Deco interiors more luxurious or its neon lighting more gorgeous. It’s also fascinating to see it full of people rather than splicers, even if there’s a slight sense of theme park attraction about it.

There’s precious little interaction between Booker and the population, and what there is is clearly staged for the benefit of a few seconds here, a few seconds there of wonder. All the same, for any would-be Rapture tourist, Burial at Sea is an absolute must.

If you want to get closer to Fort Frolic’s Sander Cohen or see what Rapture nightspots looked like before cracks opened and the rust crept in, then Burial at Sea is the only way.

Sadly, Episode One isn’t wholly satisfactory. It has an intriguing storyline which hints at Booker’s past and Rapture’s future, but doesn’t really deliver any knock-out moments until the very final scene. And once it gets going, with a trip to a sunken department store now doubling as a prison, it focuses on combat to the exclusion of anything else. 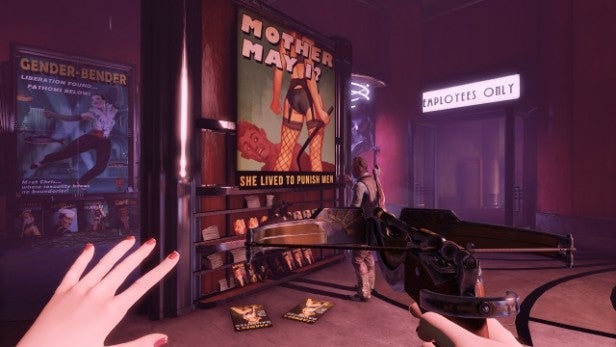 This isn’t necessarily a problem. The combat system is a mix of Bioshock and Bioshock Infinite, allowing Booker to carry more than two weapons at a time and replacing Infinite’s vigors with Bioshock’s plasmids, but still allowing Elizabeth to grab health and ammo through interdimensional tears, or call in reinforcements like automated turrets or samurai warriors to whittle the enemy down.

As in Infinite, you can grab hold of high-rails, here known as pneumo-lines, and use them as a means of traversing great distances or springing down on enemies for a one hit kill.

Meanwhile, Infinite’s Devils Kiss vigor returns as a plasmid, along with the electrocuting Shock Jockey, that much-loved fight starter, Possession, Bucking Bronco and a new fave – Old Man Winter. This last freezes foes so you can shatter them into chunks, while also proving handy for turning spouts of water into bridges. This and a new weapon, the rather lovely heating and vaporiseing Radar Range, add a few new wrinkles to the tried and tested Bioshock action.

Sadly, Episode One is lacking in memorable encounters, with only a handful of confrontations that stand out. It also doesn’t help that it’s over in roughly two hours, or that this barely gives you time to develop your plasmids or make much use of them.

What you’re left with is a fascinating return to Rapture which – if you read all your audiologs – provides some fascinating new insights into the while Bioshock/Bioshock Infinite background story. On its own, though, Episode One feels less than essential. 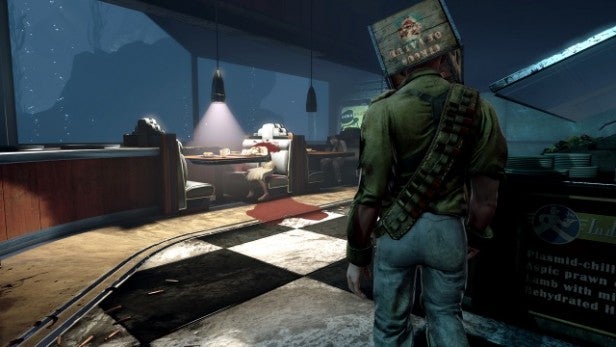 Luckily, Episode Two is a different kettle of deep-sea fish, not only developing the storyline in intriguing directions, but giving the Bioshock gameplay a fresh twist. If you felt a lingering disappointment after Episode One, here’s the good news: Episode Two makes it all feel worthwhile.

Partly this comes down to an ingenious switch of character, shifting focus from Booker to Elizabeth. She’s instantly a more sympathetic character, and a stronger heroine for a game that wants to explore the whole gamut of Bioshock’s fiction, whether that means more about constants and variables, or more about the Lutece twins, Dr Suchong and Jeremiah Fink.

Where little really seems at stake in Episode One, Episode Two makes you feel that anything and everything is up for grabs. There’s an energy to the narrative that just wasn’t there before. 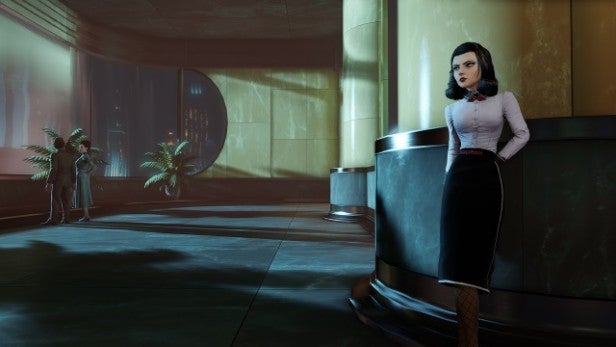 That energy is mirrored in the gameplay. The Elizabeth you play has lost some of her powers and all of her sage-like vision, leaving her almost defenceless in a broken, splicer-infested chunk of Rapture.

She’s weaker in hand-to-hand combat, can’t take many bullets without getting killed, and has no means of revival if she dies. In fact, Episode Two is the first Bioshock where death really means something, and you need to find and use medical kits if you want to survive.

While it’s possible to win through encounters using the hand-cannon and shotgun, it’s much more sensible to use stealth and surprise to your advantage. In fact, the game actively encourages this, with a new plasmid, Peeping Tom, that allows Elizabeth to turn invisible or glimpse enemies through walls, and a new crossbow weapon that’s great for silent attacks.

Ammo for the latter is thin on the ground, but scavenge hard and you’ll get by. This new emphasis on stealth is smart and effective, and those who like to play Deus Ex, Dishonored or Thief the quiet way will find a mode devoted just to them.

Put it all together and you have a smart, new take on Bioshock, happy to revisit areas of past games and shed new light on previous events – even if the word ‘previous’ makes precious little sense in the context of Bioshock.

It’s genuinely tense, constantly engaging and much better paced than Episode One, even though it doubles the running time. There’s still not much opportunity to develop Elizabeth’s plasmid powers, but there’s certainly plenty of room to experiment with those you’re given, and new variations on the plasmids and weaponry keep the toybox growing the whole way through.

Not all of the adjustments to the Bioshock storyline work, and one feels oddly apologetic, as if Ken Levine and Co have felt the need to soften one particular portrayal. It’s a well-meaning and necessary decision, but the way it’s been done feels clumsy and jarring.

Still, there’s so much good stuff going on elsewhere that we’ll let it slide. The climax isn’t quite as jaw-dropping as Bioshock Infinite’s, but then it’s hard to think of many games that might qualify. It’s still thought-provoking and powerful and, as with Infinite, there will be a lot of theorising and explaining going on in the next few weeks.

Unfortunately, the debate might still also take in value. Each episode comes in at £11.99, which means you’re still talking about £24 for roughly five to eight hours worth of play, depending on how determined you are to extract every last morsel of Bioshock goodness.

Buying the season pass cuts this down to a much more manageable £15.99 for both, but this still isn’t the biggest expansion we’ve ever played. Overall, though, we’d say it’s worth it. Episode One is perfectly solid, and Episode Two virtually unmissable if you’re any kind of Bioshock devotee. 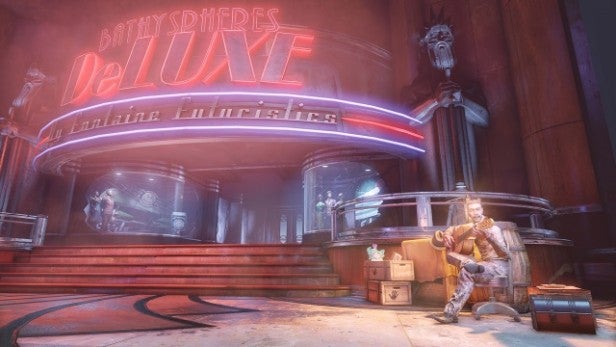 Given that this is probably the last gasp of a drowning city and the end of an exceptional series, Burial at Sea makes an effective capstone. There might not be hours and hours of gameplay hidden in there, but there’s no shortage of brilliance, beauty, intelligence, philosophy and wonder. And in the end, isn’t that what Bioshock was all about?

Verdict
If this is goodbye to the Bioshock saga, then Burial at Sea is a fitting funerary piece. Episode One isn’t that strong or imaginative, but makes up what it lacks in gameplay with its vision of Rapture and a storyline that packs one killer punch.

Episode Two makes the whole thing worth it, not simply expanding on the Bioshock universe, but giving you a different style of gameplay and a story that puts the whole construct in new light. If you hate all things Bioshock, prepare to hate some more, but if you’ve loved it, this is just one more essential piece in one of gaming’s greatest puzzles.