Ten years ago The Binding of Isaac would never have launched on a Nintendo platform. After all, it’s a dark tale of a child escaping from his homicidal mother, where Christian iconography meets a palette of blood, guts and faecal matter, and which is about as repellent as a game with a cheerful 16-bit retro art style can be. Luckily for us, it has. The Binding of Isaac makes a fantastic Nintendo Switch game and Afterbirth+ is arguably the definitive version.

Buy The Binding of Isaac Afterbirth + from Amazon UK | Amazon.com

It’s not an easy game to describe. On one level it’s a roguelike done in the style of a classic arcade adventure – the original Legend of Zelda and Ultimate’s Atic Atac are obvious reference points. On another, it’s a twin stick shooter, where you’re speeding around the rooms of a dungeon, blasting enemies and dodging bullets until you kill your foes and unlock the doors. Each level has a series of these rooms, containing monsters, treasure chests and traps, culminating in a final boss fight. It’s a deliberately tough game where you’ll die – and die a lot. When you do, it’s permanent. The levels, monsters and power ups are all re-generated, and you have to start again from square one.

However, even this description doesn’t really do Edward McMillen’s game design justice. Like most roguelikes it’s designed to be played in runs, and the game is short enough that a run could be over in around thirty minutes (though death means many will be much shorter). The procedural generation is smart enough and the range of enemies, room designs and power-ups so extensive that you never face the same challenge twice. 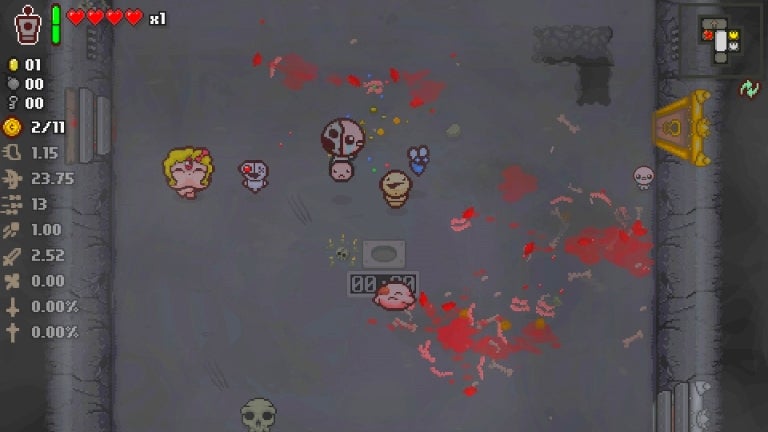 And much of the appeal of the game is that it’s weirdly gnomic. There are hundreds of perks and power-ups to collect, but it’s not exactly clear what many of them do. You’ll keep meeting the same bosses, but in a different order, in different chambers with different minions and sometimes different rules. Even your enemies seem difficult to get to grips with. There are basic types in action, but also strange variations, some spawning other enemies, some exploding, some more aggressive, some super-tough. Mini bosses may appear, or may not.

This all makes each run unsettling, interesting and unpredictable, the game seeming to throw in new elements and combinations every time you die – or if you’re especially good and lucky – finish. It also makes for a game that’s both tough and incredibly addictive. You’ll have bad runs where everything goes wrong or you make a series of stupid mistakes, but may see something new or learn something important, so haven’t wasted your time. You’ll have good runs where a great set of power-ups mixes with a more forgiving layout and boss order. The odds might be stacked against you, but there’s always a chance you’ll win through on the next go.

Meet certain conditions and you’ll unlock new playable characters, some starting off with higher health or damage stats, most starting with specific power-ups or items. Switching to a different character can be just the way to get past a floor or boss that has you blocked, though simply unlocking some is a game in and of itself. 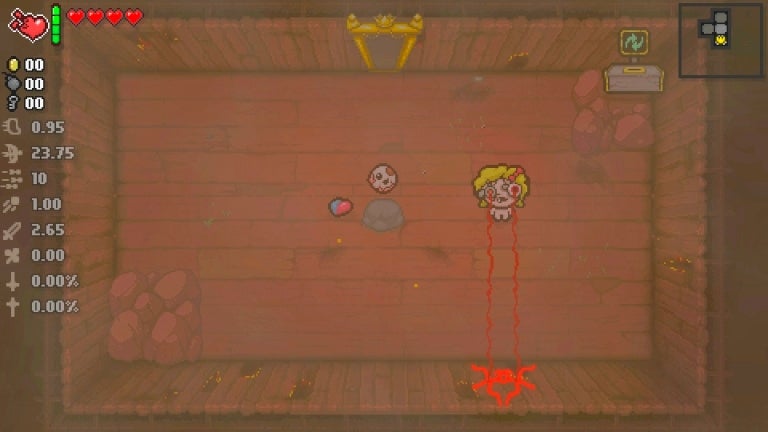 There are also multiple endings. Simply beating the obvious ‘final’ boss is a challenge, but then comes another chapter and more chapters after that. The end result is that what seems a fairly short, fairly simple game contains a multitude of permutations, giving you different objectives and different ways to play. Like Spelunky – that other seminal new roguelike – it’s a game that only grows richer and deeper the more you play. In fact, The Binding of Isaac is a cult classic in two senses, not just because it lies outside the mainstream, but because there’s something cultish in the culture of wikis and faqs you’ll need to decode it.

Frankly, I have no idea what it all means. The subject matter and imagery can be disturbing, but also deliberately puerile or comic in a gross-out way. It’s impossible to tell whether the anti-religious imagery is serious, schlock horror or a strange mix of both. But the Binding of Isaac is never anything less than distinctive. The visual style manages to be cute, ugly and compelling all at the same time, while the pounding score and repulsive sound effects make a powerful combo. You’ve never played a game quite like it, and there’s a good chance you never will again.

Does the Switch bring anything new? Well, all the material from the enhanced Rebirth release of The Binding of Isaac makes it in, plus new items, new rooms, a new character, new bosses and a new final chapter (though all were available in the PC version of Afterbirth+). You can also play co-op with a second player working as a helper, and do so using the Switch’s joy-cons if you wish. 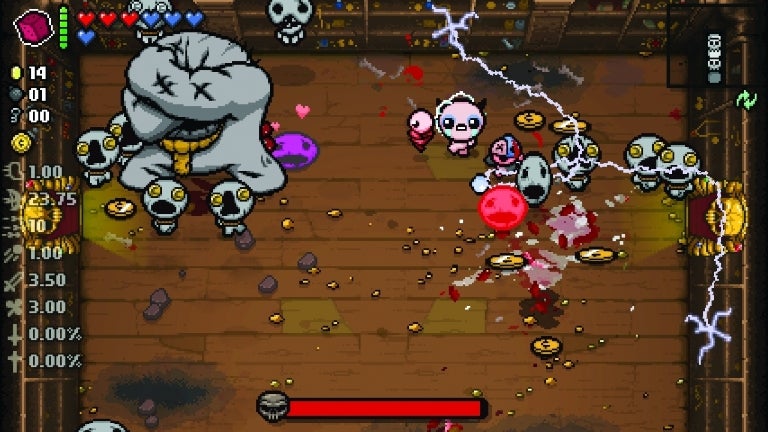 Perhaps the main thing, though, is the ability to play the game on your TV or on a handheld, with decent dual analogue stick controls either way. Some might prefer it on the bigger screen, but for me it’s a brilliant game for undocked play, perfect both for a multi-hour session or for a quick half-an-hour here and there. Sure, pausing the action pulls you out of the zone – often a fatal mistake in The Binding of Isaac – but it’s something you adjust to with a little time.

That doesn’t quite make Afterbirth+ a Switch essential. The steep learning curve, high difficulty level and frequently repulsive content pretty much guarantee that Afterbirth+ won’t be everybody’s cup of tea. What’s more, the £35 asking price is a mite too high for comfort. On Steam, you can buy Afterbirth+ and the rest of the saga for £25, or Rebirth for just £11 if you want to dip your toe. It’s not that £35 is such bad value, but once again we’re asking why Switch gamers are expected to pay so much more.

Buy The Binding of Isaac Afterbirth + from Amazon UK | Amazon.com

Too weird and repellent for a mainstream audience, too brilliant for any serious gamer to ignore, The Binding of Isaac has found a surprisingly natural home on Switch. It’s ideal for short bursts and longer sessions of handheld play, and the sort of title that only gets richer and more interesting the more hours and effort you put in. Edward McMillen’s cult classic isn’t for everyone, but if it’s for you there’s no better way to play it.