Binatone is no stranger to the Android tablet space, having graced us with the HomeSurf 7 tablet last year. However, the Binatone ReadMe Mobile is something altogether more unusual. It’s an Android tablet geared towards ebook reading that offers a physical qwerty keyboard, laid out in landscape orientation unlike the Kindle’s portrait take on the form.

Budget Android tablets are commonplace, but  few of them revert from the norms of a shiny black body and resistive (or, if you’re lucky, capacitive) touchscreen . At a glance, they’re designed to offer you everything an iPad or more expensive Android tablet does, but on closer inspection they invariably fall apart. The Binatone ReadMe Mobile is a little different.  Part ereader, part Android tablet, it doesn’t have a touchscreen – instead relying on a Qwerty keyboard and a small, joystick-like cursor controller. 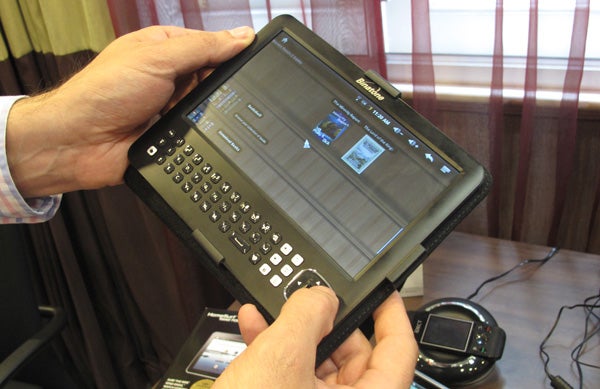 Whether deliberately or not, the Binatone ReadMe Mobile subverts a number of Android tablet norms, not just by using physical controls instead of a touchscreen. It also uses a matt screen rather than a glossy display, seen in the vast majority of Android tablets, and virtually demands to be used in a landscape orientation. Glossy screens supply a slightly more vibrant image, but are extremely reflective – making them virtually useless for outdoors applications. This ereader-tablet hybrid isn’t quite as reflection-free as an Amazon Kindle, but it sits happily between a Kindle and iPad 2 in reflectiveness terms.

It’s perhaps not right to compare the Binatone ReadMe Mobile to these two kings of the e-book reader and tablet markets though. It looks and feels like a budget device, which it unmistakeably is at just £129.99 for the 2GB edition.

It offers a 7in screen, but with a middling TFT panel under the surface, viewing angles are less than perfect. Tilt the ReadMe backwards, when watching a movie perhaps, and contrast shift will rob shadow detail from anything on-screen. It’s something common to almost all laptops (expensive and cheap) too, but the IPS screen of the first Apple iPad raised the bar significantly for colour-screen tablet devices like this. That said, performance is significantly better than the budget Archos Arnova tablet we looked at earlier this year. 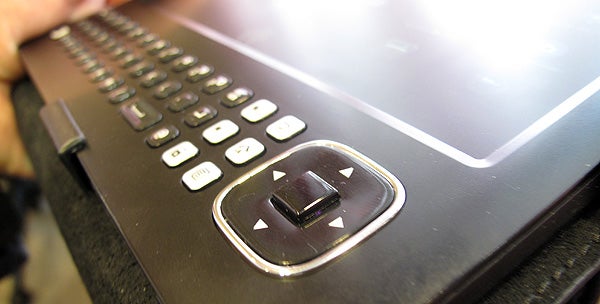 The keyboard is also affected by the Binatone’s ReadMe Mobile’s budget origins. It offers s definite clicky action, but still feels a little cheap. We can’t help but wonder whether the keyboard might confuse this gadget’s message too. While the market-leading ebook reader, the Amazon Kindle, offers a keyboard, it’s arguably something that’s not a “frontline” key part of the device  – the eInk screen and integrated Kindle Bookstore are. 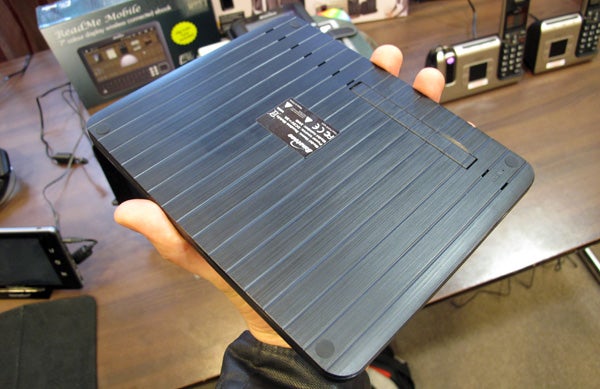 To get the most from the Binatone ReadMe tablet, you’ll have to adopt something of a DIY approach. It doesn’t give you access to the Android Market. Instead, you have to rely on the web browser and the Gigastore app store. We didn’t get to see how many apps were on offer, but we image there would be fewer than the AppsLib store seen Archos tablets – and the interface did not impress. The lack of a touchscreen could cause some serious compatibility problems within apps too. Stay tuned for the full review to see if it can play Angry Birds.

The all-plastic body doesn’t help to make the Binatone ReadMe tablet win any premium-device feel, but it does keep it very light. Binatone hasn’t yet released any details on the exact weight of this ereader-come-tablet, but it felt significantly lighter than the vast majority of tablets we’ve palmed in the past.

If the insubstantial feel is a turn-off rather than a bonus, it also comes bundled with a folio-style case. The ReadMe slots into this with the help of three plastic holders, while the back of the case can be folded up to act as a stand for the Binatone. Although the case is not made of premium materials, this is a surprisingly neat addition for a £129.99 tablet. 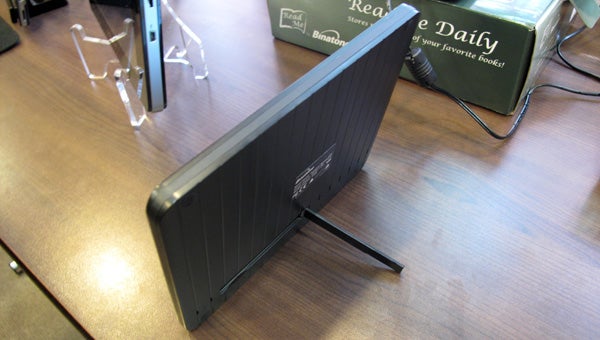 Not bothered about out-and-about skills? The Binatone ReadMe Mobile features a flip-out stand on its back, letting it stand up on its own lengthways. The built-in physical keyboard ensures you probably won’t want to use it as a photo frame, but the stand could come in handy when watching movies in bed.

The imperfect viewing angles stop this from being a budget movie-watching hero like the Archos G9 80, but it’s more-than-capable of blasting out the odd TV episode. Here’s where the holes in our tech knowledge about the Binatone ReadMe Mobile start to take their toll though. We don’t yet know the processor speed or video codec compatibility of this device. We got to test out a few videos, but as they were Binatone’s own demo files rather than our gruelling benchmark vids, we can’t glean much from the tablet’s otherwise perfectly decent performance.

Navigational lag was kept at a respectably minimal level, given this device runs the aged Android 2.1 OS, but we’ll have to wait for our retail unit to really test its powers –  we’re not particularly used to using Android with a cursor, after all. Even if it does have a 1GHz, or more powerful, CPU, the 800×480 pixel screen won’t be able to make best use of anything above 480p video content.

Connectivity-wise, the Binatone ReadMe Mobile puts on a lukewarm show, with a full-sized SD card slot, miniUSB for data transfer and headphone jack. It uses a dedicated power jack – so presumably won’t charge over USB – and offers no video output. How does this compare to other budget Android devices? Some are beginning to better this spread, the Kogan 7in tablet in particular offers an HDMI output. eReader hybrids rarely offer this feature though.

Although interesting, the Binatone ReadMe Mobile has a number of issues to overcome before it can claim success. It attempts to meld the design of two new(ish) tech trends, tablets and ereaders, but lacks some of the most important bits of both. It doesn’t have a glare-free screen or a proper app store, which are vital to the identity of any respectable ereader/tablet. Can the low price alone make up for these omissions? We’ll be back with our full conclusion in the full Binatone ReadMe Mobile review.