Expensive tablets like the Motorola Xoom have a hard time competing with the Apple iPad –  after all where is Apple’s lifestyle-focused approach more at home than in the already lifestyle-focused tablet sector? However, an “underclass” of cheapie tablets like the Binatone HomeSurf 7 has managed to find a following away from the spotlight. To keep its affordable Android tablet offering up-to-date, Binatone has now released the second edition of the HomeSurf 7, available for just £99.99.

Binatone’s second edition of the HomeSurf 7 tablet is much like the first in most respects. It’s cheap, at £99.99, small and made of plastic. Like its predecessor it uses a resistive touchscreen, so uses a flexible plastic screen rather than the glass front layer of fancy-pants rivals like the Apple iPad. European MD Luke Ireland made big claims about its quality though, saying its aim was to offer “the best” tablet experience available for under £100. While we’re yet to find a killer sub-£100 tab, the list of contenders is expanding, now including the capacitive-screened Kogan 7in tablet. 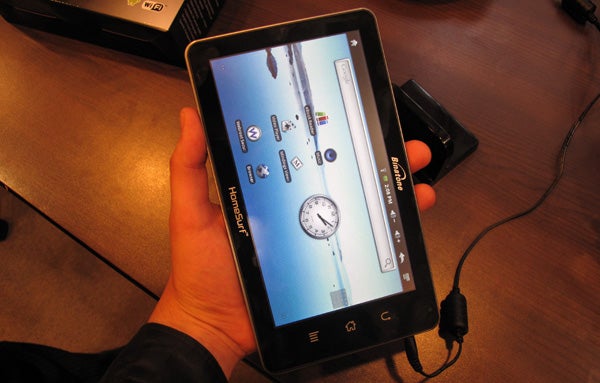 Our initial impression was that the second-edition Binatone Homesurf 7 is still beset by the same issues that were present in its predecessor – a fairly poor display, resistive touchscreen, lack of apps and low-end feel.  With a budget TFT display viewing angles are fairly mediocre, with contrast shift setting-in when the tablet’s tilted backwards. This will limit its video potential, but we’re yet to see a truly cheap Android tablet that wasn’t affected by this problem – and the second-gen Homesurf 7 at least fares better than the Archos Arnova 10.

The next cut-price budget pick here is the resistive touchscreen. This kind of touchscreen relies on direct pressure, meaning that it’s virtually always less responsive in use than the capacitive kind. The Binatone’s model did seem to be relatively effective though, responding to very light touches in a way that’s intended to mitigate for the technology’s inherent deficiencies. It can’t make up for the lack of multi-touch quite as easily though – you won’t be able to pinch-to-zoom here as you would with an iPad or Asus Eee Pad Transformer. 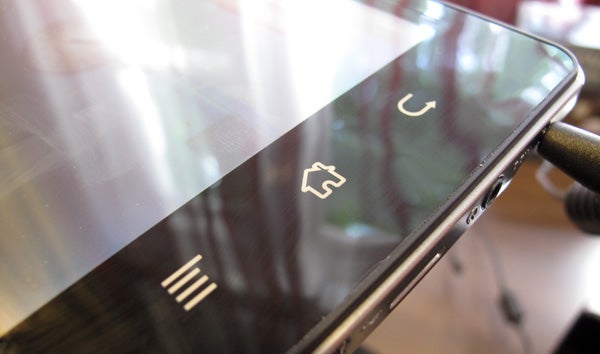 Similarly tricky to make up for is the lack of the Android Market. As the Binatone Homesurf 7 is a tablet running a smartphone OS – Android 2.2 – rather than a tablet system like Android 3.0 Honeycomb it doesn’t have access to the native Android app store. Instead, it has Gigastore, a third-party solution. We didn’t get to check out exactly how many apps this has to offer, but we weren’t particularly impressed with our quick look at its interface. As a worst-case scenario, you’ll be able to install apps using the built-in browser anyway – as with most budget Android tablets, to get the most out of the Binatone you’ll need to employ a little patience.

When the second-gen Binatone HomeSurf 7 features many of the same compromises as the original HomeSurf tablet, you might ask exactly what’s different in this new iteration. Aside from some aesthetic design tweaks, it offers an updated version of Android, 2.2 instead of 2.1, and improved software optimisation for greater speed. As yet we don’t have final word on the CPU used in this device – fingers crossed for a 1GHz CPU or greater, although even this doesn’t guarantee super-swift operation, as we saw in the Storage Options miScroll tablet.

We didn’t notice any terrible lag in operation, but we’ll comment on this more fully in our in-depth review. However, we also didn’t notice any overt software optimisation. Other than a top touchscreen nav bar, seen in budget Archos Android devices like the Archos 70b, the Binatone HomeSurf 7 seems to run a vanilla version of Google’s OS. This is not necessarily a bad thing, but makes us wonder about how this tablet intends to reach above the many super-budget Android tabs out there.

Connectivity-wise, it’s a perfunctory performer. There’s a microSD slot, AC power socket, miniUSB data transfer port and 3.5mm headphone jack, but no HDMI video output. Similarly, there’s Wi-Fi on-board but no 3G mobile internet, and no 3G model on the way. Aside from the touchscreen, there are three standard soft keys to aid in navigation – while they look like touch-sensitive panels they’re actually just dressed-up old-fashioned clicky buttons. 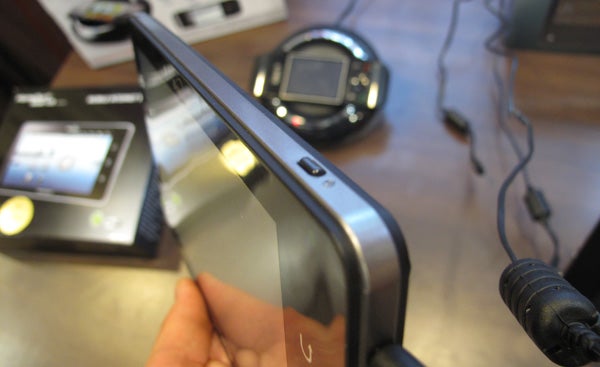 The RRP of £99.99 is sure to lure in a few buyers, but from our brief time with the Binatone Homesurf we couldn’t discern anything in particular to propel it beyond other low-price rivals like the Kogan tablet and Storage Options MiScroll. As ever, we’ll probe further in our full review.