Back in the days when men wore braces, women donned shoulder pads and advanced technologies such as sprites, bitmapping and (wait for it) floppy disks were the talk of the town, Binatone was happy to make cheap musical instruments and pong-style TV games. I remember sitting in front of the TV, paddle in hand, perfectly happy playing ‘tennis’, ‘football’ and ‘squash’, and conjuring plinky-plonky ELO-style compositions on a friend’s electronic keyboard.


But times move on, none more so than in the technology industry, and today Binatone has gone from home entertainment novelties to more mundane fare such as phones, shavers, hairdryers and kitchen appliances. Its latest venture is into the world of satellite navigation and at £100 the price of the X350 isn’t far off those of its more humdrum, home appliance cousins. 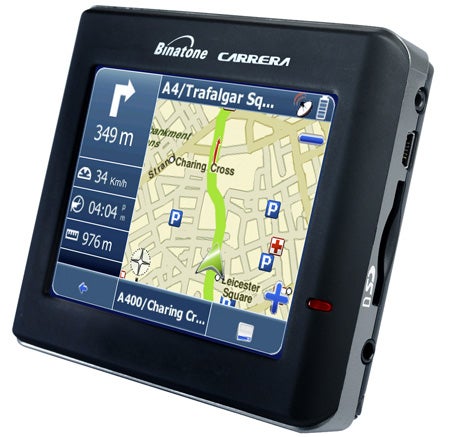 So what do you get for your money? The answer, on paper at least, is a surprisingly good sat-nav system. It’s perhaps understandable that maps of Europe aren’t included at this price, but there are very few other bases that aren’t covered. For starters, it’s well designed, with a large 3.5in screen and silver and black, rubberised trim surrounding it. That screen is bright and easy to read, even in sunny conditions and the touch sensitivity is both accurate and responsive. Around the edges are a slot for SD cards, a mini USB socket for charging the device, a 3.5mm headphone output and a socket for a TMC aerial so you can receive traffic information over FM, and the whole thing is slim and pocketable.

The X350 has Navteq maps on board and during testing I found these to be about as accurate as you could expect. There’s always going to be the odd road here and there that isn’t quite right, but it’ll get you where you want to go 99 per cent of the time. It takes largely sensible routes and, when it doesn’t, the device has multipoint routing, so you can easily set up an alternative. More importantly, perhaps, when you stray off the route set out for you by the navigation engine, route recalculation is, as far as I can tell, instantaneous. 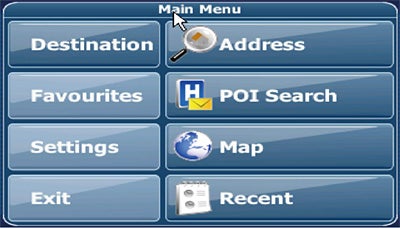 I always say you can tell how good a sat-nav box is going to be by the quality of its voice instructions, and the X350 doesn’t disappoint. They’re accurate and timely, and the speaker is loud and clear. On the negative side it doesn’t link instructions together when two or more turnings are in close proximity and there’s no automatic volume adjustment based on speed or ambient noise, but neither are great losses.

The maps, both in 3D and 2D views, are as nicely rendered as the voice instructions are clear. Particularly good is the turn indicator arrow which, in the 3D view, hovers above the surface of the road and casts a shadow. This sounds a bit gimmicky, but it makes it extremely easy to see which exit on a roundabout you need to take, for example, or where to go at a complicated, multi-exit junction.

Search and routing options are much more impressive than the budget price tag would have you expect, too. There’s full postcode search here, and though you’re stuck with the two keyboard approach (one for letters, one for numbers), it’s not too fiddly and the keys are easy to poke. There are trip management tools here, which allow you to set up routes in advance, and adding start points, stopovers and destinations is about as easy as I’ve found on any sat-nav, let alone one this cheap.


There are even options to optimise for pedestrian, bicycle and motorbike as well as for the usual shortest and fastest routes by car. You get a safety camera database with six months worth of free updates and roadblock avoidance too, with the option to route around traffic jams and rejoin the route a mile or two further down the road. 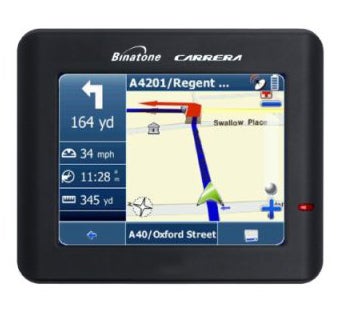 It’s a remarkable feature set but there is a pretty major problem that seems to be related to the power (or lack of it) under the X350’s hood – it just doesn’t seem to be up to the job. Initial route calculation, as a result, takes an absolute age for anything other than the most simple of routes. I asked the X350 to take me to Norwich airport from north-east London and I’d finished writing this paragraph before it managed to calculate a route successfully. Even by giving it something simpler to deal with failed to improve matters, with a straightforward 17 mile route to Wimbledon Park in south-west London taking a painful 1min 20secs.


Worse still, complicated routes often confounded the X350 completely. On more than one occasion it simply refused to complete route calculation and informed that it didn’t have enough resources. I tried entering addresses in Liverpool, north Wales and the Lake District – all of them failed. The lack of power also means that the Carrera is a little sluggish when browsing the map.


In the Carrera X350, Binatone has made a decent stab at producing a comprehensive sat-nav for not much cash. It’s well-featured for a device so cheap and isn’t too hard to use. Maps are clear and navigation, once you’ve set up a route, is good. However, its slow calculation of simple routes and inability to calculate complicated ones effectively render all of this effort useless. After all, what’s the point in having a sat-nav that can’t get you to Wales or Liverpool from London?