Aimed at users that can’t afford to be offline for more than a moment the BiGuard 7300GX from Billion niftily combines an ADSL2/2+ modem and CardBus slot that accepts a range of 3G data cards. A great idea but certainly not new as we saw one of the first examples of this teamwork over a year ago from Linksys with its Wireless-G Router for 3G/UMTS Broadband. The main differences here are Linksys only supports Vodafone’s Mobile Connect data cards whereas Billion’s alternative can also handle T-Mobile web’n’walk cards, which impressed us enough to earn them a Recommended award.


The router can play a number of useful roles as the data card can be used as an Internet backup link if your ADSL connection goes belly up. With the data card as the primary link the router can deliver an Internet connection from anywhere where there’s a power socket but Billion goes a step further as it also bundles a 12V car adapter as well so making the router even more versatile. Along with the integral ADSL modem, the 7300GX delivers the standard quartet of switched Fast Ethernet ports and also includes a basic 802.11g access point. 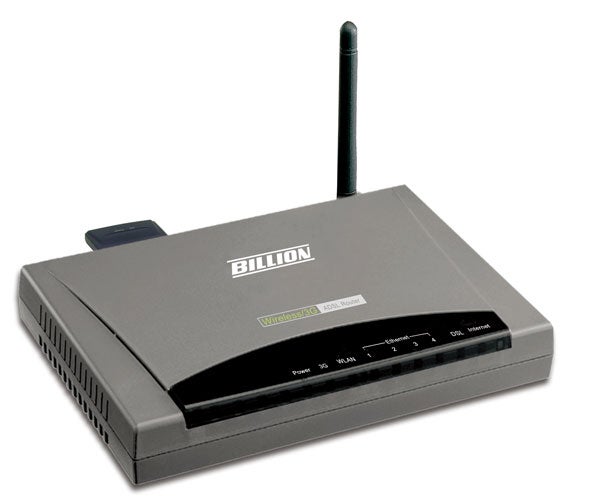 You don’t get any utilities to help with initial installation but we found the router easy enough to set up. From the web interface you run a quick start routine which asks you to select your primary Internet connection and then steps through a questionnaire about your account details. Next, you move on to the wireless access point where, unlike Linksys, you can leave it disabled if you wish. If not, then you can pick from WEP or WPA/WPA2 encryption although we were surprised the router doesn’t have an auto-detect function for the wireless channel, which you are required to set manually.


The router provides a standard SPI firewall and you can enable or disable NAT on the ADSL link. Selecting the advanced option in the side menu enables you to access the firewall settings where we found plenty to play with. The firewall can be customised with up to six packet filters allowing you some control over what applications and services users are allowed to access. These can include ranges of IP addresses and ports, inbound or outbound traffic and schedules which decide during what days and times they are active on. MAC address filters can be applied although these can only be used to block specific systems from Internet access.

LAN services can be opened up to external users by enabling virtual servers and a good selection of predefined applications is provided. You can add your own by entering the private IP address of the server plus associated private and public ports and apply a time schedule as well. One system can also be placed in a DMZ where it sits outside the firewall and is subject to unprotected access from the Internet.


For web access controls you can apply both keyword and domain filtering. The latter enables you to create trusted and forbidden lists but bizarrely any URL not in either list will simply be passed through making the trusted list rather pointless. The QoS feature could prove useful – particularly if you’re using a data card connection. This enables you to create policies to control inbound or outbound traffic and apply guaranteed minimum and maximum bandwidth percentages to ranges of IP addresses and application port numbers.


For testing we used a Vodafone Mobile Connect data card and had no problems configuring it from the web interface. However, we did find on occasions that the router didn’t pick it up on insertion and required its power cycled. Either ADSL or data card can be nominated as the main connection and the advanced status screen provides plenty of information about each one. The Failover/Failback mode works by probing the active connection and activating the 3G link if it doesn’t receive a response after so many retries. However, the firmware version in the router as supplied for review didn’t support it – the options are in the web interface but we couldn’t get them to work.


We upgraded the router to firmware v1.04c and found this met with some success. Prior to testing we had both the ADSL and data card connections up and running with all traffic routed through the former. We then pulled the ADSL cable to simulate a failure and the router eventually switched over to the 3G connection enabling us to continue web browsing. When we reinserted the ADSL cable the router’s failback routine acknowledged its presence and swapped back to the primary connection after a minute or so. The process isn’t seamless, though, as a large download running during both swap-over periods failed to carry on and had to be restarted. Furthermore, failover didn’t always work first time and the manual makes no mention of these specific features at all.


The 7300GX provides a simple solution for providing Internet access no matter where you are. It supports a good range of 3G data cards and the firewall also offers useful traffic controls although we wouldn’t recommend buying this purely for the failover feature as we found it wasn’t 100 per cent reliable.

(centre)We had no problems while testing with our Vodafone Mobile Connect data card.

(centre)After we pulled the ADSL plug the 3G card was activated automatically as the failover link.

(centre)The firewall’s QoS feature could prove useful if bandwidth is at a premium.