On its original home, then Nintendo DS, Big Brain Academy came across as a sort of poor cousin to Prof. Kawashima’s Brain Training. It didn’t get the hype and it didn’t have the same level of pseudo scientific backing, but it did have some nice cartoon presentation and its games were arguably a little less like homework and a little more like fun. The idea was that, rather than reduce your brain age, you built up a metaphorical brain mass, with your brain’s overall shape determined by your performance in five categories: memorize, visualize, analyze, compute and identify.


On the Wii, Big Brain Academy has the advantage that there’s no competition from a Brain Training game, as of yet, and it’s family-friendly, approachable style is an ideal fit for the Wii’s mainstream audience. Could this do for mindgames what Wii Sports does for physical competition? 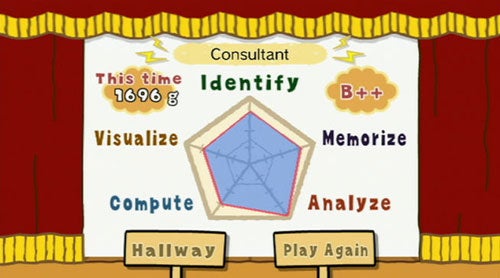 Well, the first thing you might note is that Big Brain Academy is superbly tied into its host platform. The controls are as simple as pointing the remote and pressing the big A button, and it’s hard to imagine anyone between the ages of four and 70 struggling to get to grips with the game. You choose game modes from doors in the central academy corridor, go to the office to add players, and can track progress at a glance from a chart on the wall. Ingeniously, Nintendo has even made the speaker on the remote part of the fun; it becomes your friendly remote trainer, offering encouragement and in-game updates as you play your way through the game. And as with Wii Sports and Wii Play, the game uses Miis to identify its players. You just pick yours out and enroll it in the academy when you first start up the game, and you’ll see resident Miis wandering up and down in the corridor between activities. 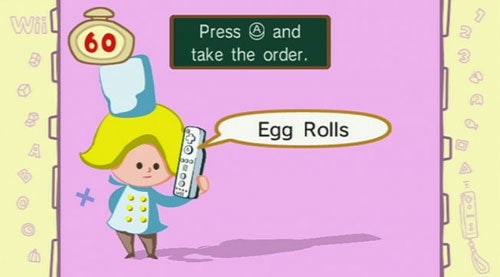 Visually, Big Brain Academy is typical of Nintendo’s quirky Touch Generations output. The visuals have a nice, clean cartoon look with some restrained use of Cel Shading on the Miis, and there’s a little of the wackiness of Wario Ware: Smooth Moves in the various mini-games. Presiding over the academy once more is the cheerful Professor Lobe, looking suitably more rounded than he did in his DS debut. You don’t expect high-end graphics from a brain-training game, but Big Brain Academy has personality to spare.

The meat of the game, however, lies in the mini-games. These are again organised into the five categories, and at the start of the game you can test your brain. Having completed a set of mini-games in each category, you’re rewarded with a ‘weight’ in each and an overall brain mass. This then nets you a grade (A, B, C, D with + and – modifiers) and a shape diagram of your brain that gives you an instant glimpse of your strengths and weaknesses. You can re-test whenever you want, or practice mini-games one by one. To encourage this, the game doles out medals for your efforts in practice mode, and you’ll also be ranked according to how well your scores compare with others playing Big Brain Academy on the same Wii. 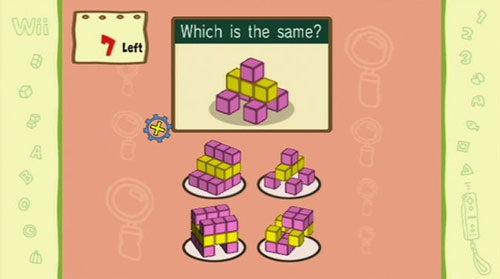 Overall, the games are fun and there’s a reasonable amount of variety. One minute you might be placing pieces of track down to help get a train from A to B, the next you might be shooting balloons in numerical order from low to high, or watching the speedy swapping of bird-cages in order to identify which ones have occupants. There are tests that check your concentration, your ability to identify animals from a photo as it slowly revolves, your ability to make rapid calculations or your memory of cartoon faces or items appearing in a particular order. I’m not sure the game’s ‘science’ holds much water – arguably some games are as much a test of pointer precision and reaction time as quick-thinking, and in some you’re practically obliged to wait in order to, say, spot the difference between four short animations. What’s more, it’s hard to say whether the tests are consistently difficult or not. Still, whether the actual training works or not, there’s certainly a fair amount of fun to be had. 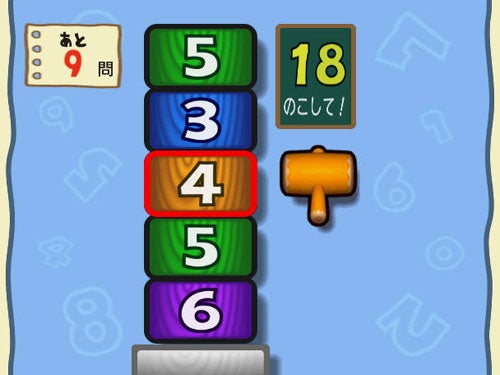 The major problem is that with only fifteen basic mini-games and three difficulty levels on each, that fun won’t last a single player that long. Once you’ve scooped all the medals and tested your brain a few times, you’ll inevitably start to lose interest, and the Big Brain Academy hasn’t got the daily play structure or the achievement-tracking features that made Brain Training such a long-term winner. So basically, if you live on your own, don’t play Wii games with anyone else and don’t know five or six other people with Nintendo’s little wonder, you can stop reading right now. Big Brain Academy will not fill up your lonely hours. 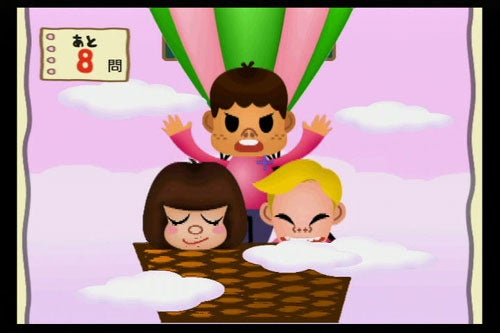 If, however, you have a family or a household full of friends, read on. What lasting power there is to this game lies in competition. With multiple players with multiple Miis enrolled you’ll soon find yourself battling for brain grades in the tests and for rankings in the practice sessions. As a personal anecdote, I played a single game yesterday for nearly half an hour because I couldn’t bear to concede the No.1 position to my smirking better half, and battles over other scoreboards are rapidly breaking out in the Andrews household. For added bragging rights, you can also send your academic records to Wii owning friends, opening up the brutally antagonistic competition/fun to anyone you know who has a Wii. This alone should keep everyone coming back for more. 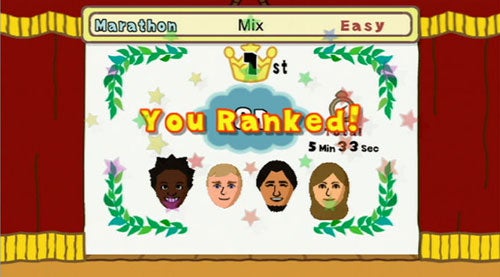 Yet the game also has a set of decent multiplayer modes. Competitive sprint allows two players with remotes to battle it out for who can finish an allotted number of tests correctly in the shortest time. Panel Quiz, meanwhile, has two teams taking turns to select games from a Question of Sport-style panel for points using just one controller. Finally, Marathon is essentially a co-op option, with two or more players passing the remote on in a mission to complete as many games as possible within a time limit in order to obtain the biggest combined brain weight. Luckily, the game pauses the countdown while you pass the controller amid constant warnings to be careful and watch your surroundings. Obviously Nintendo doesn’t want more busted plasma screens or Wii-related injuries. Still, perhaps a warning that it’s not nice to threaten to shove a remote somewhere personal and painful if the winning player doesn’t stop dancing round the room in jubilation might be a good addition. Some people are just such bad losers… 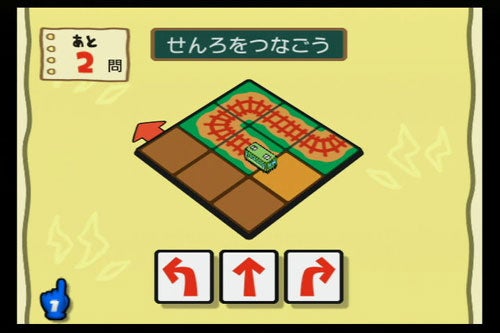 The multiplayer even throws up a few additional amusements, like a brilliant memory test where your remote becomes a phone, and you’re asked to remember food orders before picking them out on an on-screen form. Once again, Big Brain Academy is an object lesson in how to use the Wii hardware. Let’s just hope some third-party developers I could mention learn from it.


In short, we have a game that sucks in single-player but takes off in a family or social setting. I still don’t think that Big Brain Academy has the legs to provide months of family fun, but if it won’t take over from Wii Sports as the essential Wii game it will certainly brighten up a good few gloomy days or evenings. Given the sub-£20 price point, that’s pretty good value for money. Best of all, it still gives you a nice – if slightly bogus – sense that you’re giving your brainpower a boost. Just call it an educational investment and feel good. 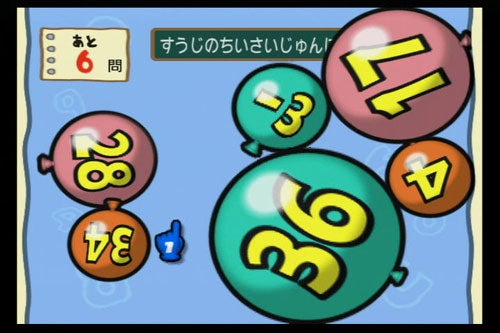 
The lack of mini-games kills Big Brain Academy as a single player game, but share the fun with family and friends and the pleasure-pound ratio looks good. Worth enrolling.