Available on Xbox One, PC
Beyond Eyes might be a one-trick-pony, but at least the trick’s a beauty. While its young heroine wanders a bright, white featureless landscape, a world is painted in around her; grass, trees, streams, stone walls and wooden fences, all brushed with impressionist strokes onto the blank canvas of the screen. The noise of a bird or a critter in the distance causes a sudden blossoming of shape and colour to match, the strokes appearing for an instant than disappearing until the next outbreak of noise.

This is all you have to guide you in a world where the protagonist – blinded in some mysterious incident – is about as vulnerable as they get. She moves slowly, feeling her way through her surroundings, and this stunning effect is the game’s way of bringing her predicament to life. It’s one of the most poetic visual concepts that you’ll see this year. 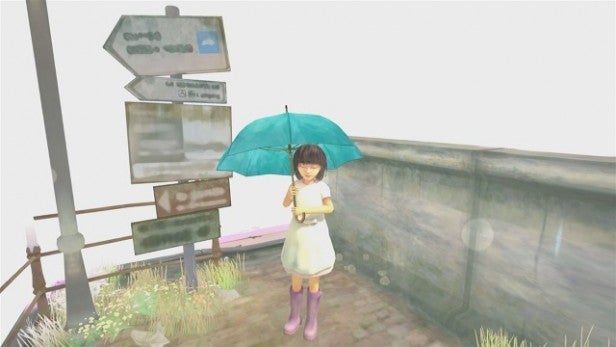 The problem is that this is really all there is to Beyond Eyes. It’s a slight tale of a girl’s attempt to be reunited with a friendly kitten, that sees her traversing countryside, coast and town to find her feline chum. Along the way she encounters such perils as mean-sounding dogs, mean-sounding seagulls, mean-sounding cats and mean-sounding crows, all of whom cause the girl to be paralysed with fear. Whether she’s in actual danger or not (it’s a failure-free, death-free kind of game), Beyond Eyes uses purple hues and harsh vignetting to make it clear that the psychological effects are both severe and terrifying.

How, then, to deal with the little devils? You might guess fighting’s off the menu, but how about some puzzles? Perhaps a little lightweight stealth? Maybe singing? Nope, Beyond Eyes is primarily a game of walking very, very slowly, the long way around any obstacle you find in your path. Sometimes it’s a game of trying to find your way out (slowly) of a complex area with lots of artificial barriers, and I did note one or two sort-of puzzles in the game (with added slow walking). Mostly, though, there’s a lot of walking slowly to be done. 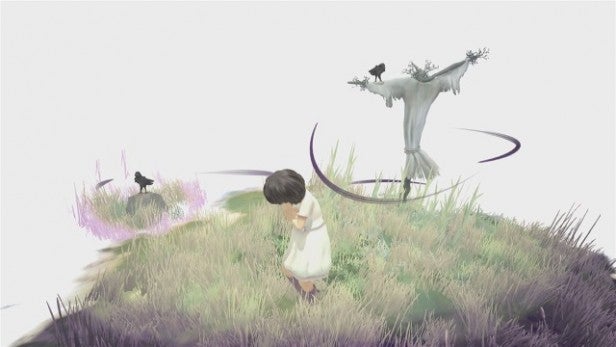 And that’s a real issue, because it turns out that walking very, very slowly, the long way around obstacles isn’t actually all that much fun. The graphics are beautiful, the music is lyrical and gorgeous, and you can see where the game is pushing to have an emotional effect. At times it succeeds, giving you some tiny sense of what it’s like to have to rely on other senses when your sight has gone, or making the fears of childhood, amplified by lack of vision, suddenly tangible. It even manages to turn a mundane world into something magical from time to time. For example, there’s a superb sequence near the end where your senses are drowned out by rain, making it even harder to keep a grip on where you’re going and avoid getting lost.

But at the end of the day, it’s hard to avoid the verdict that, while artsy and gorgeous-looking, Beyond Eyes is also painfully dull. As you’re forced to wander around another low wall for the umpteenth time, or stopped in your tracks by another growling dog, there’s a temptation to say ‘look, the cat’s just gone. Let’s pack up, go home and hope it comes back again of its own accord.’ I know that some have moaned about the slow-pace and easy-peasy platforming of Submerged or the tiresome walking and limited interactivity of Everybody’s Gone to the Rapture, but – trust me – Beyond Eyes makes both look like Call of Duty. While only two hours or so long, I was all too grateful when it was finally over and the credits rolled, too jaded to even care about what should have been a moving ending. 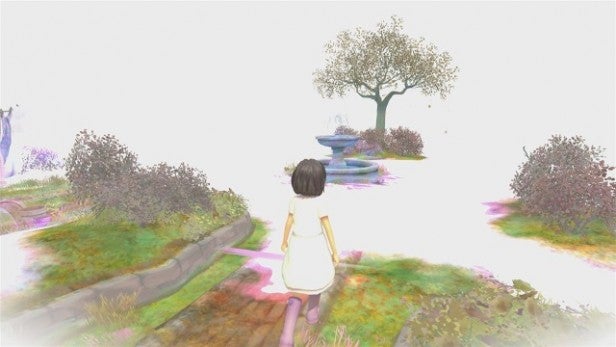 I don’t feel good about writing this. It’s clearly a game with a lot of heart and feeling behind it, that’s trying to do something different. Wouldn’t it be great to have more games that explored other emptions than excitement, fear and rage; that tried to evoke our sympathies and make us experience the world in a new way? Yet worthy as Beyond Eyes is and as much as I want to like it, I just can’t get past its ponderous pacing and lack of engaging gameplay. There’s art and the ghost of a great idea here, but it never takes any kind of flesh.

Verdict
A beautiful but boring arthouse game that makes other so-called walking simulators look like all-action blockbusters. There’s heart, soul and emotion in there, but just not enough idea about how to keep the player engaged. As a result, it’s a painfully short game that still manages to outstay its welcome.