A VPN (virtual private network) is a brilliant way to access blocked services, keep your internet browsing private, and even to make it look as though your computer is in a different country.

There are two main problems, however. Firstly, to use a VPN you need to be able to install a client on a device, which isn’t possible with everything, such as media streamers. Secondly, your VPN provider usually limits the number of connections you can have, so you can’t always use your phone and laptop at the same time, for example.

Betterspot from Betternet aims to solve both of those issues. This little router runs the Betternet VPN, encrypting all traffic that passes through it, so you can run multiple devices at the same time and connect any device that won’t let you install a software VPN client. Betterspot is funded via a Kickstarter project, with final samples set to ship in January 2017. I got my hands on an early sample to see how it’s shaping up.

Betterspot is designed to be carried around with you everywhere. Its square 79 x 79 x 20mm body is little bigger than your palm, so the router is easy to slip into any bag. A Micro USB port provides power, so you can use any external adapter or even a USB port on a computer.

With this early sample, the Micro USB port was too far recessed, so a regular cable wouldn’t stay in place. My sample shipped with a cable with the plastic chipped away to make the USB connector longer, but I’ve been told that this will be fixed for the final version. 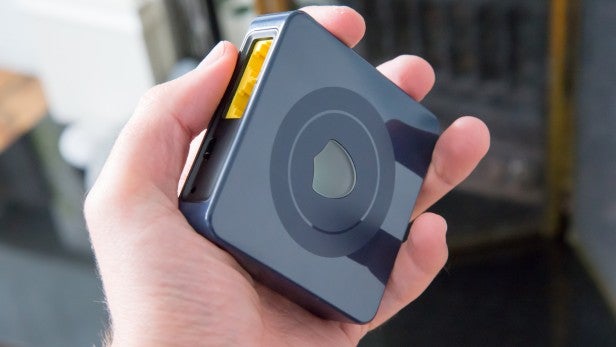 Around the rear of the device are two Ethernet ports. One is a WAN port, for connecting the router to a network; the other is for a separate wired client, such as a laptop. You’re not limited to using wired networks, since Betterspot will also connect to any 802.11n 2.4GHz network, making it fully wireless. It’s good to see all types of connection supported, since it means that the Betterspot can be used anywhere. 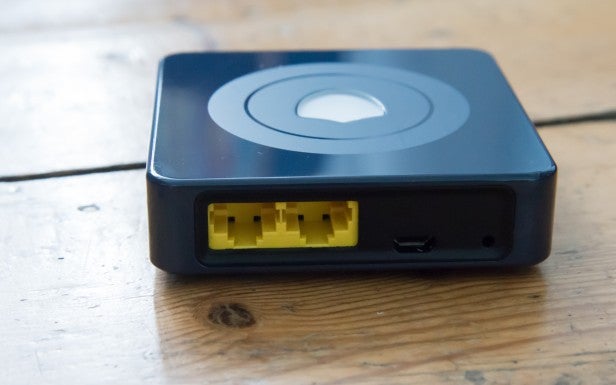 With this early edition of the router, configuration is achieved entirely through the smartphone app. With the final release, Betterspot will have a standard web interface – the router runs a modified version of the DD-WRT open-source router firmware.

Using the app is simple: you connect your phone to the Betterspot’s Wi-Fi network and open the app. There are very few options. Tapping the network icon, you can choose to connect via a cable (if one’s connected) or to a nearby wireless network. Selecting a Wi-Fi network prompts you to enter the security key. 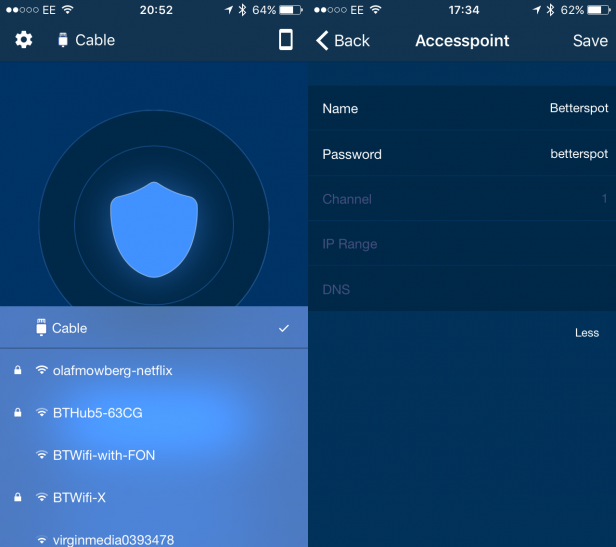 That’s about it for configuration – in its prototype form, the Betterspot is very limited. Inside the Settings menu, for example, there’s only an option to change the Betterspot’s Wi-Fi network name and password. There are no options to adjust channels manually. Betternet has said that more Wi-Fi options will appear with the final version of the product.

By default, Betterspot’s initial connection is set to Direct, which means that it acts as a router with no encryption. Tapping the Direct button gives the VPN options, and Betterspot can use the premium Betternet service or TOR. TOR’s advantage is that it’s free, so you can use this router without paying for a subscription – a sub usually costs $30 a month, although you can buy the router with a monthly or annual subscription. The downside of TOR is that it’s impossible to predict performance and not all apps will run through it.

For the best performance, Betternet’s VPN service is the right option and there’s a choice of servers to use. For most people, the Best Performance choice is best, since it will connect the Betterspot to the fastest local server. Alternatively, you can pick a country that you want your devices to appear in, including the US, UK, Netherlands, Germany or Japan. This latter option is useful if you want to to use a geo-blocked service, such as iPlayer. 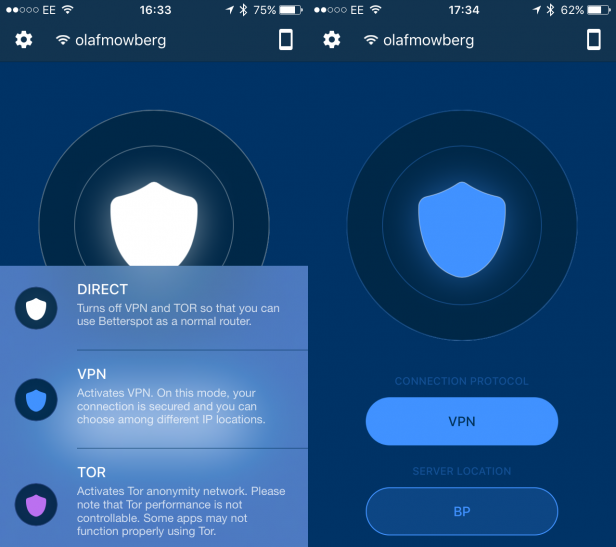 I tested Betterspot’s performance against that of my regular internet connection. Connecting wired or wirelessly to my home network, I can achieve broadband download speeds of around 72Mbps when using Speedtest.net. This is close to by broadband connection’s maximum theoretical speed.

First, I connected the Betterspot via Ethernet to my broadband, connecting my computer to it via the second Ethernet port. Using Direct mode on the Betterspot, my throughput roughly halved to 27.75Mbps. Using the Best Performance VPN mode, I got download speeds of 13Mbps.

Changing the connection of the Betterspot to wireless, I got the same download speed of 13Mbps when using the Best Performance VPN option. Turning off the VPNand switching to Direct mode saw the performance increase to 17.32Mbps.

Moving to a purely wireless connection, with the Betterspot connected to my home Wi-Fi network, speeds dropped to 5.86Mbps for the Best Performance VPN and 8Mbit/sec for Direct mode. This isn’t great performance – although it’s likely good enough for typical use on a Wi-Fi hotspot or hotel network. It’s possible that performance will improve with the final version, particularly if there’s finer control over the Wi-Fi network.

One of the benefits of a VPN is that it can unblock some content. For example, running through the VPN you can access any website on which a network has a block. A second use is for accessing geo-located content. I tried the Betterspot with iPlayer and found that it worked, but I couldn’t play Netflix through it, getting the dreaded “You seem to be using an unblocker or proxy” message. Betterspot is not the right service is you want to stream US content, then. 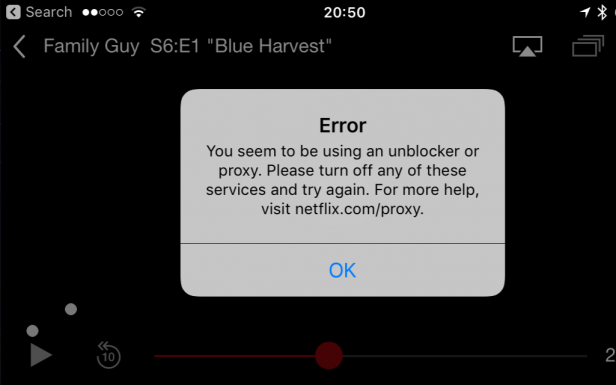 Betterspot will cost $100, including a one-month Betternet subscription, after which you can fall back to TOR or pay $30 to continue with the premium service. Better value is the $130 option, which includes a one-year subscription to Betternet Premium. Anyone backing the project on Kickstarter receives a 20% discount, though.

The Betterspot is a neat little router that makes getting a secure connection anywhere from any device easy. If you travel regularly, and need to get multiple devices online securely, then it could prove to be a handy tool.

Performance is good enough for web browsing and the odd bit of video, but this isn’t the right router to unblock US Netflix content. Currently, the Betterspot doesn’t have many configuration options and finer control over its Wi-Fi network could be useful and may increase performance.

Still, as a neat security tool to carry around, the Betterspot could find lots of fans. I’ll bring you an update when final review samples become available.