There’s a certain symmetry to Bertram Fiddle that new time developer Rumpus Animation may not be all too keen to acknowledge.

Detective Fiddle – the game’s Victorian name sake and star of what’s surely set to be the wider Adventures of Bertram Fiddle series – is something of an amateur sleuth, widely derided by his peers from beginning to end for the considerable amusement of the player. 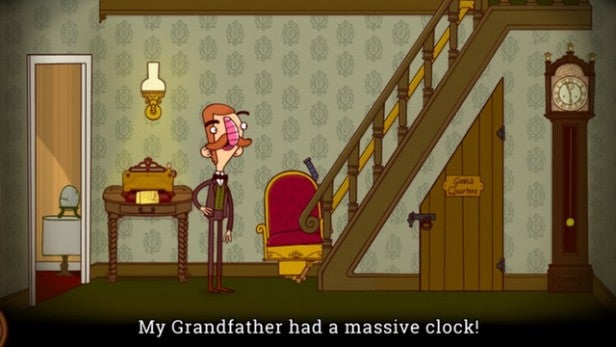 Mingling with adventurers, explorers and detectives held in much higher esteem – including the one and only Sherlock Holmes, depicted here as an incessant narcissist – it’s your job to guide him to greatness, solving the mystery of the rogue briefcase that lands in his possession during a bungled street robbery. But while developer Rumpus Animation has gone to great lengths to endear Fiddle to players via the medium of his failings, it’s hard not to observe that the game itself feels like it’s standing in the shadows of its much more competent brethren.

The Adventurers of Bertram Fiddle is a point-and-click adventure formed in an especially traditional mould, tasking players with solving puzzle after puzzle within a world seemingly designed to titillate them. Like noted franchises before it (Broken Sword and Monkey Island undoubtedly the most celebrated examples), humour has a very big role to play in Bertram Fiddle, with simply tapping on an inanimate object that has little to do with the plot or portion of play at hand triggering an amusing play on words or Carry On style double entendre. 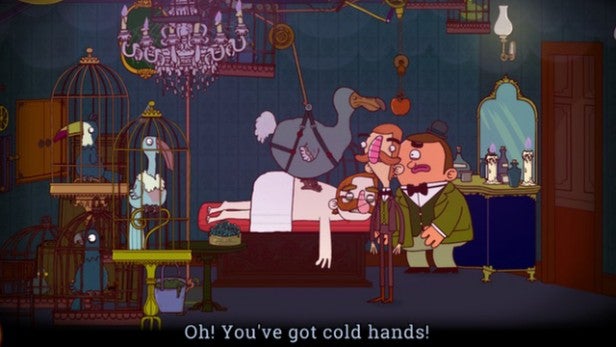 Indeed, Bertram Fiddle’s beautifully animated world is full of pop culture references throughout – despite being set in the Victorian era – though the world our discount detective resides in feels a little barren. All too often Fiddle walks into a new area that appears packed full of life and character only to discover there’s only one or two items to pick up along the way and a handful of short conversations to be had. A bevy of what appear to be interesting characters are introduced, only to be forgotten about as soon as you venture into the next room.

The controls, however, are reassuringly simple. Holding your finger down on the screen highlights all of the interactive elements in each area, symbolises by animated circles that you can then slide your finger to trigger. Objects in Fiddle’s inventory – amusingly kept within his ‘surprisingly spacious’ coat – can also be combined and then dragged into play in much the same manner. Your handy henchman Gavin can also shift heavy objects for you on command, adding a nice physical element into proceedings. 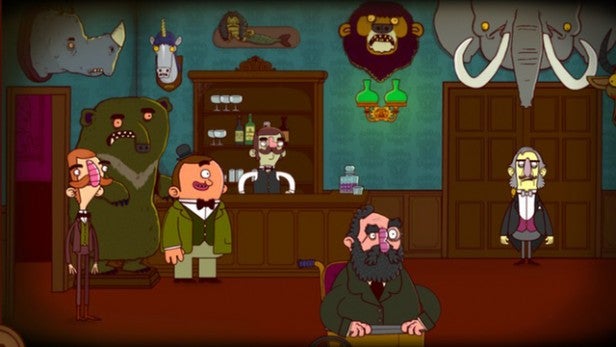 Essentially, though the first episode of Bertram Fiddle is no pushover, its puzzles are a touch one-dimensional and, dare I say it, logical. Want to send Sherlock Holmes to sleep so you get vital information from his much-maligned Watson? Simply use the sleep-inducing herbs you picked up earlier to make him a potent brew when he asks for a cup of tea. Want to step over a gaping hole in the floor blocking your path? Use that handily sized picture you spotted a few moments before to act as a bridge.

No-one likes point-and-click adventures to be unfairly harsh on players, making connections that have no basis in logic, but at the same time, it’s important to string out a riddle – problems heaped upon more problems heaped upon more problems where your aim constantly shifts from one to the next, the idea being to solve problems like knocking over a stack of dominoes rather than tackling them individually. This is, of course, no easy trick to pull off and something it no doubt took the creatives at Revolution Software and LucasArts much time to master. 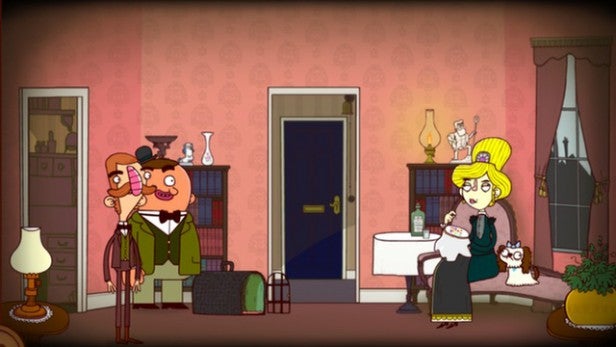 There’s also a case to suggest that, given this is only the opening chapter in what will be a long running story, developer Rumpus Animation is simply attempting to introduce the player to its model of play and, almost inevitably, things will ramp up later on, much as they start to towards the end of play in this episode.

As things stand, however, A Dreadly Business is a brief look at the potential that needs to realised in future titles – a fun little jaunt into the world of point-and-click that, ultimately like Bertram Fiddle himself, feels a little weak and by-the-numbers to stand as an adventure in its own right.

Verdict
The first chapter in the Adventures of Bertram Fiddle is solid enough with much amusement packed in, but it lacks the character and daring to really serve as a point-and-click classic in its own right, instead feeling a little like a tutorial for the bulk.