What is the Berghoff Portable BBQ?

Small-scale barbecuing can mean a choice between lacklustre disposable trays or barely filling a standard model with charcoal and not getting much heat out of the bargain. However, the Berghoff Portable BBQ is a better choice than both options. Designed to make barbecuing at the beach, on a balcony, a tabletop or at a picnic perfectly possible, its compact size translates into tasty smoky treats wherever you might go. It also lends itself well to mid-week meals as the sun goes down, so you can savour every bit of the summer and beyond. 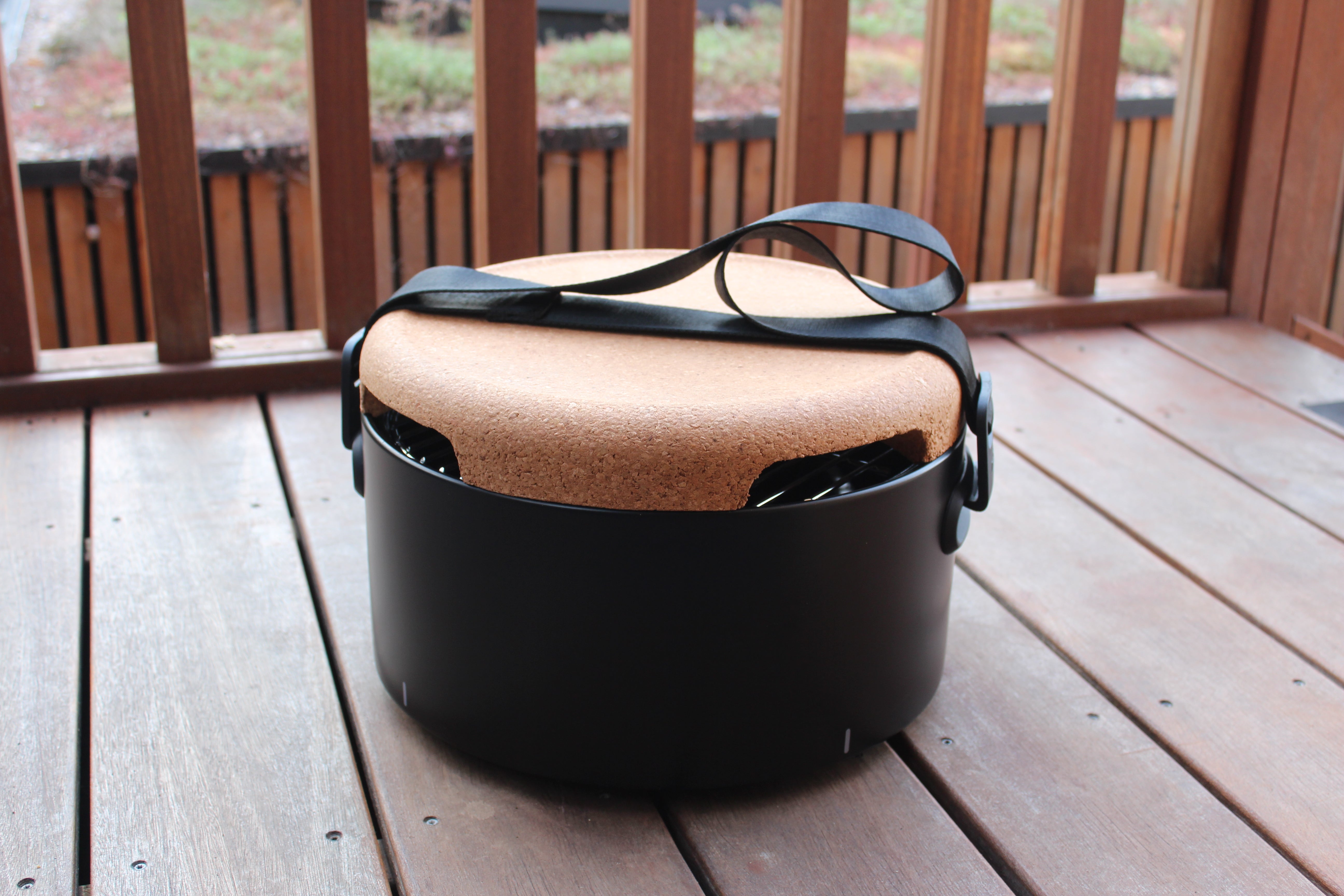 Shaped like a drum, with a carry strap that hooks on to handles either side when it’s being transported, the portable barbecue’s design has been well thought-out. First off, its clever feature is the cork pad, which covers the grill as a lid when in transit and doubles up as a heat-resistant trivet base when in use. Next is the strap – thick and durable, it’s designed as a loop so you can tighten it across the top of the barbecue to make it secure. How the barbecue cooks is also ingenious. Its body features ventilation holes around the base to enable sufficient airflow for the charcoal to burn, each marked with a line. This enables you to rotate the barbecue on the ridged cork base to raise or lower the temperature by partially covering or revealing the holes. Inside, there’s a removable heat shield plate, basket and grid for the charcoal to sit on and a chromium-plated steel grid above. A lifting tool that removes the whole grill makes it simple to top up the charcoal if necessary. Finally, all the elements are removable for fuss-free cleaning and it’s available in black or white.

While the charcoal can be lit in the barbecue, it advises the use of a charcoal starter. I opted for this method of lighting after measuring out how much charcoal would fit in the basket, making sure that the airflow holes were open. After a few minutes, the coals looked like they were ready to cook. The instructions also suggested the option of adding fresh herbs to the coals for additional smoke flavour. There isn’t a huge amount of guidance for maximising the grill space or where it’s best to place meats, veg and fish, so I was left to use my own judgement. I started by using the barbecue to grill pre-baked chicken drumsticks. As the coals below were quite close to the grill, fat and juice from the chicken caused a few flare-ups and bursts of smoke but the flames died away fairly quickly without scorching the meat. After about 25 minutes of turning occasionally, the drumsticks were golden brown all over, with some slightly charred patches on the skin. However, the meat remained flavourful and succulent. 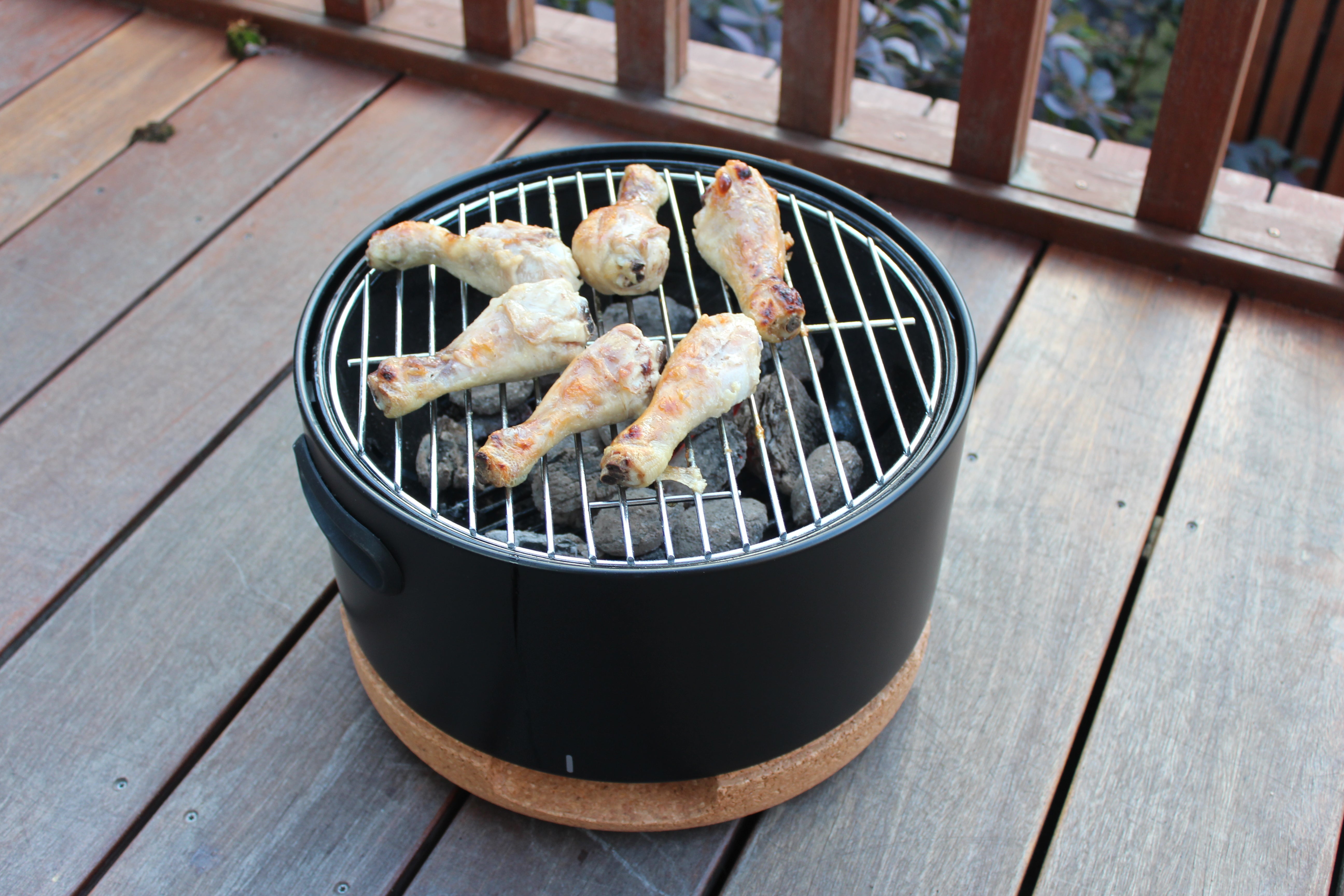 Next, I placed corn cobettes and a lean steak on the grill. After about 10 minutes, I found I had to keep moving the corn around, as the rear and centre of the barbecue remained hotter, while at the edges, the coals had begun to drop in temperature. I turned the steak, which was sat in the middle of the grill, after 15 minutes of cooking. As the meat was an uneven cut, I found it was still quite red at the thicker end. 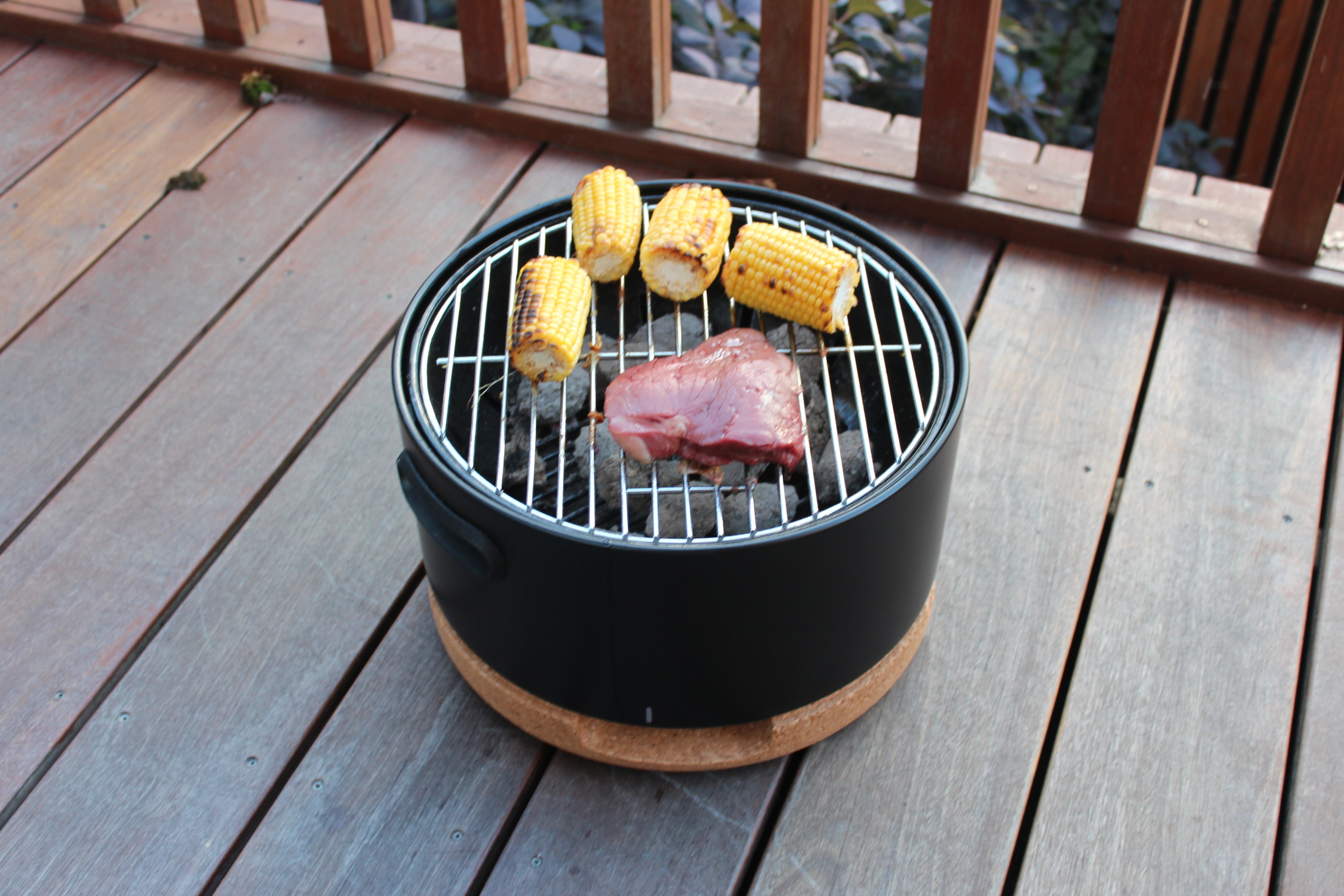 An hour into cooking in total, the outer rim of the grill was too cool to barbecue efficiently on, so I had to move the almost-cooked corn and mostly brown steak to the centre. 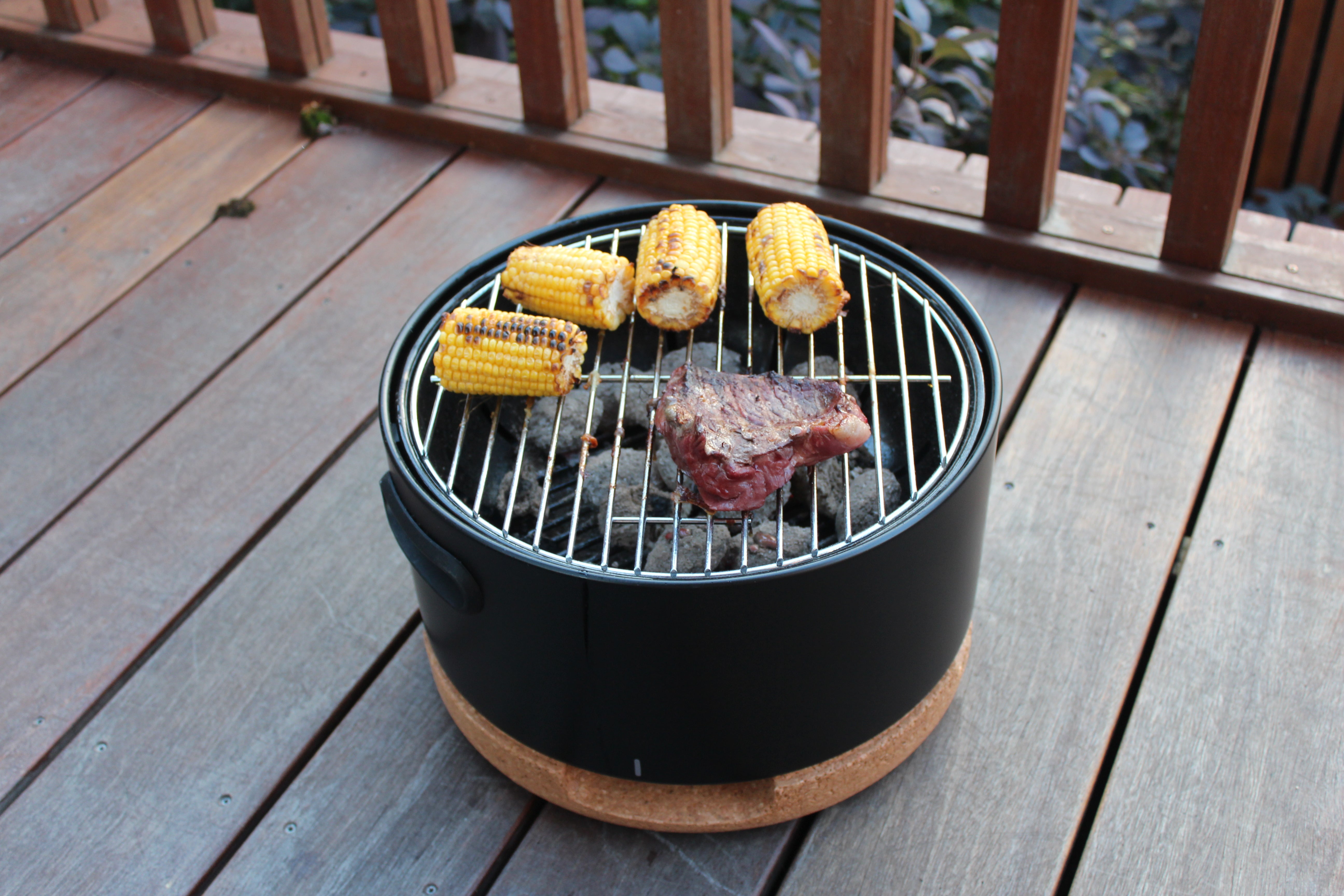 After 25 minutes, the corn was well cooked – soft, very tender and sweet. The steak took another five minutes to reach medium to well-done. One corner was slightly overcooked but the rest was still juicy and delicious. 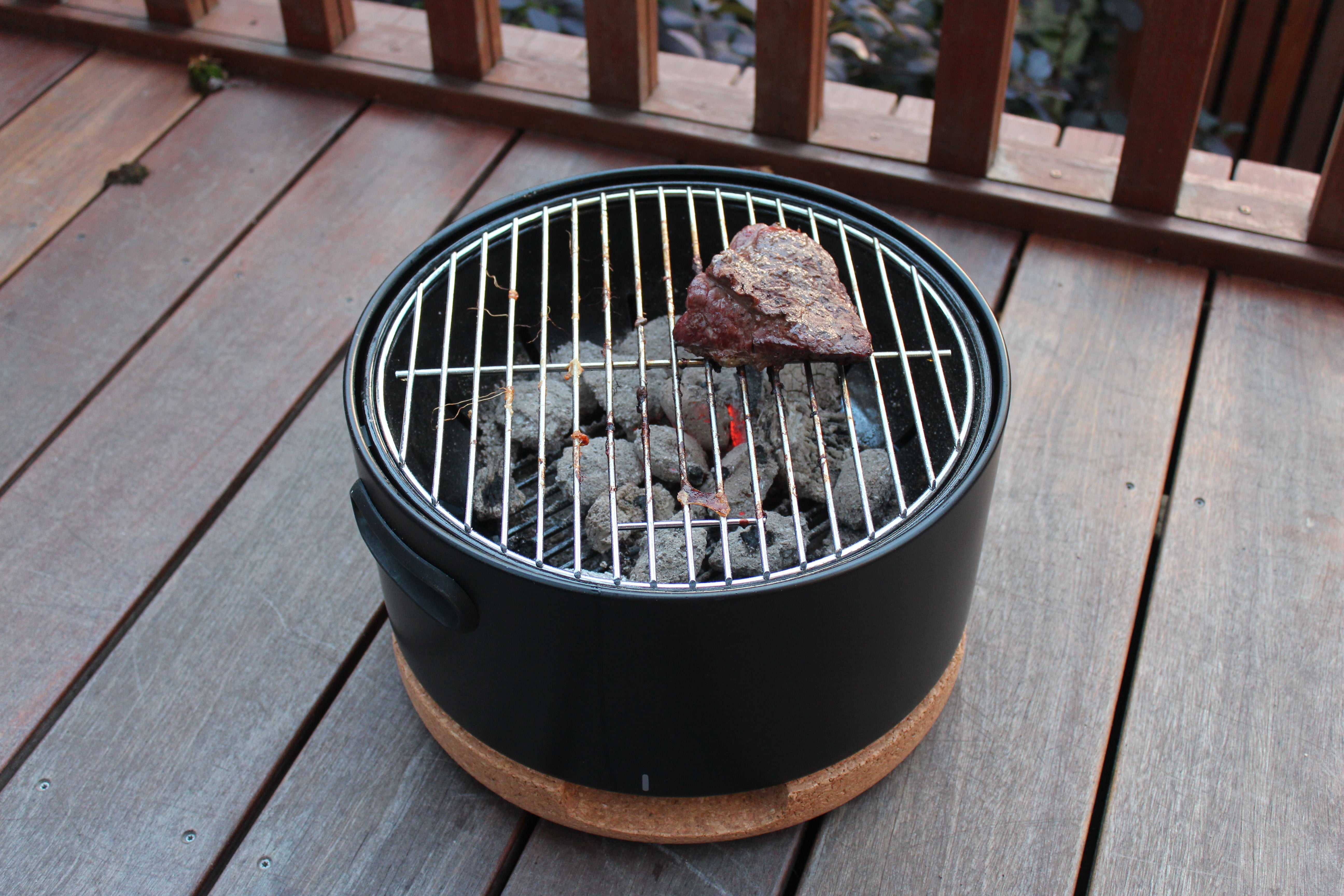 The BBQ’s manual advised tipping out the still glowing coals into water. However, I found this tricky due to the weight so opted for tipping out on concrete and dousing in water instead. Cleaning was simple – most of the parts only needed washing by hand with detergent and water, with a bristle brush for cleaning the grill and charcoal basket. However, I popped the grill in the dishwasher and it came out sparkling.

Should I buy the Berghoff Portable BBQ?

Limited grill space means this isn’t one for large families or entertaining but what it lacks in grill area, it makes up for in modern design, minimal maintenance and practicality. Solo households, couples and smaller families will love its flexibility whether at home or on holiday. Perhaps the best bit is the minimal storage required – it’s ideal if you don’t have a shed or a garage to stow outdoor items, easily fitting into a cupboard when not in use.

A smart, stylish grill that’s big on personality, yet small in size.