The BenQ Zowie XL2735 is an updated version of BenQ’s flagship gaming monitor of last year, the XL2730Z. Sporting a near-identical feature set, it packs in a 144Hz, 2,560 x 1,440-pixel TN LCD panel, a wired remote for its on-screen display (OSD), and dials on its stand so you can adjust it to the same place every time.

New to this version is the addition of side flaps that can be used to shield your monitor from prying eyes in competitive gaming environments. It’s almost completely pointless for home gamers, but on the off-chance you’ll take your monitor to a LAN event, it could be useful.

First things first, for those who aren’t aware, Zowie is an independent PC peripherals manufacturer that was bought by BenQ. Its name will now be plastered on all the company’s gaming gear, which may appear a little odd to those of us in the UK considering most of us have never heard of Zowie before. 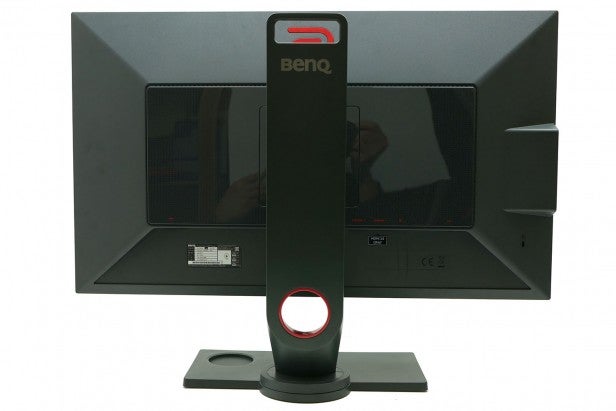 Back to the monitor itself, the XL2735 sports the same rather utilitarian/gamer look as its predecessor. Rough matte-black plastic is used throughout, bar a small patch of glossy plastic on the rear. The bezel is thick and chunky, with splashes of red highlighting key features. All in all, it’s a far cry from the sleek and classy feel of the Dell S2716DG, for instance.

It’s a practical monitor, though. The panel attaches to the stand via a simple one-button system, plus it offers VESA mounting if you want to use a monitor arm.

The stand also offers height, tilt, rotation and pivot adjustment, so you can quickly and easily get this monitor setup just right. In fact, BenQ has markers on the base and stand that allow you to mark the perfect rotation or height, so if you ever need to move the monitor then you can dial those features back in straight away. 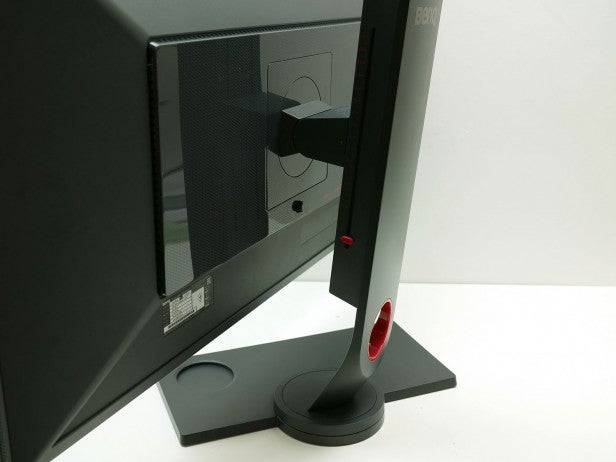 Also in the base is a circularly divot in which sits the wired remote that can be used to adjust the display’s menus. It’s a useful addition that makes it quicker and easier to navigate the menus, but it’s unlikely to be used often. In fact, if you’re going to have a remote that does such a job then it would make sense to hide the normal buttons to make the monitor look tidier.

Not that this monitor would ever look that tidy with its wings attached. The two side panels screw on to the edges of the panel and can be rotated through 180 degrees to either hide your monitor or sit out of the way round the back. I really can’t highlight enough how niche a feature this appears to be. I simply don’t see the appeal for home use.

As this isn’t a G-Sync monitor, you’re not limited to just two video inputs. Here you get a DisplayPort 1.2, two HDMI and a DVI port. 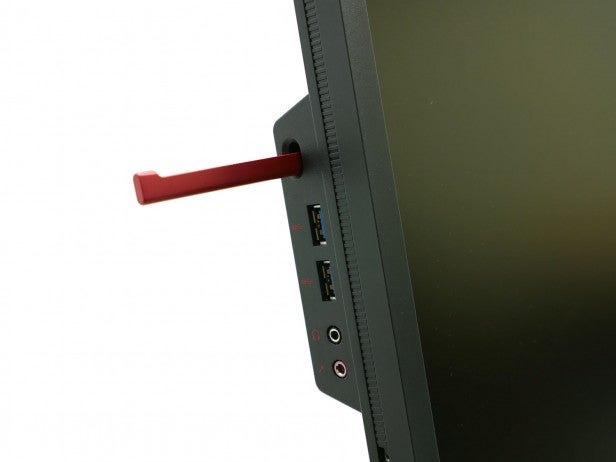 On the left side of the panel you’ll also find a two-port USB 3.0 hub plus headphone and microphone jack, plus a pop-out headphone stand. This whole selection is the single best thing about this monitor.

Easy access for plugging in USB sticks plus a convenient place to hang your headphones and the plug for them right there too. That is, unless you ever want to fold the left side panel backwards and out the way – it will knock into the ports.

Unlike several other manufacturers, BenQ hasn’t opted to use an IPS panel, but instead sticks with TN. This is in keeping with BenQ’s aim to provide the ultimate in gaming performance; TN remains that bit faster to respond than even the latest 165Hz IPS models.

However, this choice does mean that you’ll have to put up with the tech’s associated problems of poor viewing angles and lower overall image quality.

BenQ also include several picture modes for getting the best out of the monitor in different situations. These include a Black Equalizer, which essentially shifts the gamma setting to make dark areas of games appear lighter.

Also included is an Advanced Motion Accelerator, which is basically an overdrive setting for making the panel response even faster; and Instant Mode, which bypasses as much image processing as possible to reduce input lag.