The BenQ XL2730Z is an all-singing, all-dancing gaming monitor that’s bursting with features. Top of the hit list is the presence of AMD’s new FreeSync technology and this is joined by a 2560 x 1440-pixel resolution, a blur-reduction mode, 144Hz refresh rate and even a remote control!

All this tech doesn’t come cheap, though. At around £430, it’s about £100 more expensive than a more basic 27-inch, 1440p, 144Hz display. For a conventional TN LCD panel, rather than one using IPS or a similar technology, this is quite a price to pay. The question is, is it too much?

The BenQ wears its influences on its sleeve. For the most part it’s a fairly conventional looking large, black-bezelled monitor that particularly from the front looks quite simple with its square base and slender stand, with just that red plastic cable-tidying ring in the stand to give the game away.

Round the back, though, there’s an angular quality to the design and a large expanse of glossy black plastic, which is a finish we seldom see on more professional monitors these days. 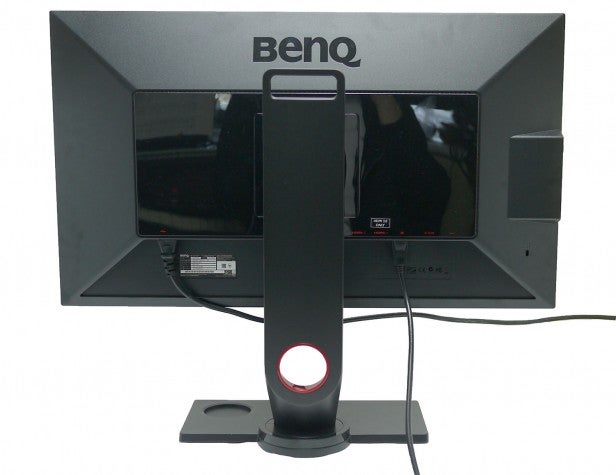 More obvious than all this, though, is the remote control. This plastic puck is used to control the onscreen menu and consists of five buttons with a central scroll wheel. It’s definitely a useful addition for initial setup but we’re inclined to think most users will have little use for it in the long term so we’re not entirely onboard with there being a dedicated hole for it in the monitor’s base.

Elsewhere BenQ has even added dials to the various adjustment points. These allow users to pick a particular height, screen angle and rotation point and then mark it for quick and easy setup every time. 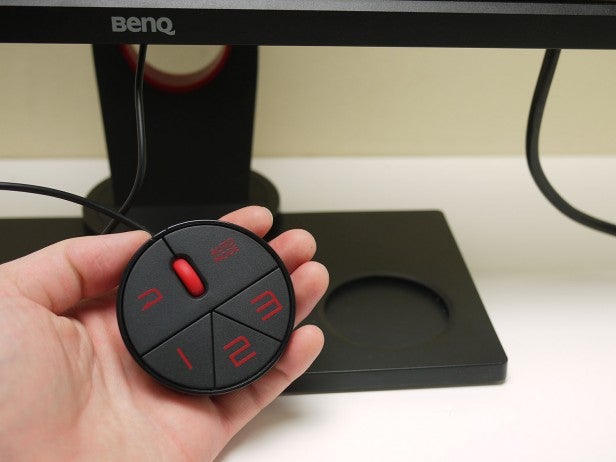 The only means of adjustment that isn’t marked is pivot, as quite reasonably BenQ has assumed most users won’t be interested in dialling in any angle other than 0 or 90 degrees.

Having this full range of ergonomic adjustment is one of the first reasons why this monitor does cost more than some. More entry level models will only offer screen tilt adjustment and generally we’re fans of having the full raft of options as it means you can get the monitor setup exactly how you like and the pivot function is really useful for finding where to plug and unplug your cables. 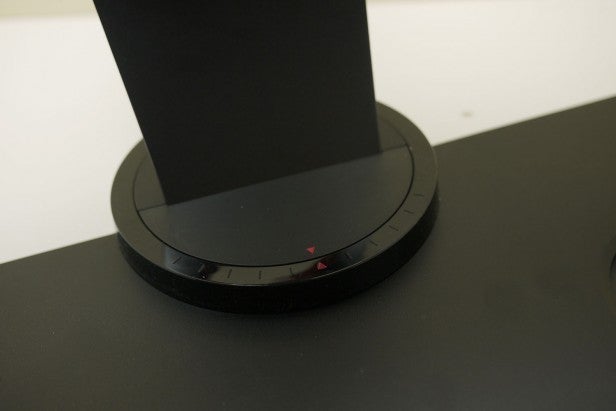 Another extra is the carry handle that protrudes from the top of the metal-clad stand. This makes it much easier to shift the monitor around, though the balance is a little off so it’s still generally a two-handed operation to lift it.

The final eye-catching extra is a retractable headphone stand. Situated on the left edge, this red dot pops out to reveal a 70mm long metal spike onto which you can hang your headphones. Now this may sound like something of a gimmick but actually it’s one of the most useful little extras we’ve seen on a monitor in quite some time. We wouldn’t necessarily pay extra for it but if it’s there we’ll definitely use it.

Moving onto more conventional external features, joining the headphone stand on the left edge is a set of easy-access ports. You’ve got two USB 3.0 sockets and both headphone and microphone jacks – perfectly positioned next to the headphone stand. The headphone uses a sound card built into the monitor so quality could be a concern and it only works over HDMI and DisplayPort. The microphone is just a normal pass-through. 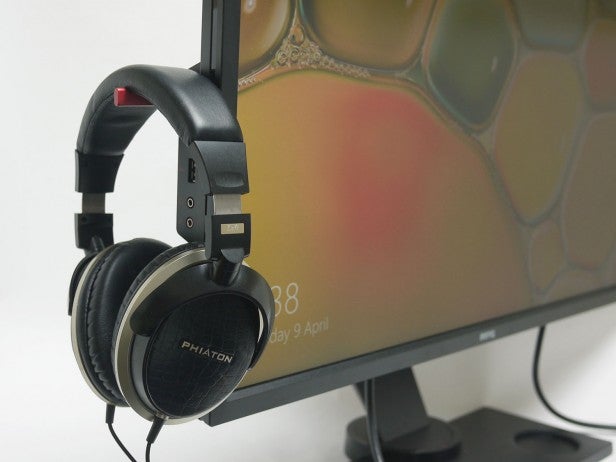 On the underside is the rest of the connectivity. Here is the input for the microphone, the miniUSB socket for the remote, a DVI-D socket, two HDMI, one DisplayPort, one VGA and a USB B input. This is a decent selection and again highlights the premium status of this monitor.

That’s it for external features but there’s plenty more going on inside the BenQ XL2730Z. The most important is the presence of AMD FreeSync, a new monitor technology that makes for smoother more responsive games, no matter how fast or slow your graphics card is. It only works with some AMD graphics cards at the moment but we expect it to become a standard feature soon enough.

Otherwise the 27in, 2,560 x 1,440 pixel panel also claims a lightning-fast 1ms response time allowing for up to 144Hz refresh rate.  This should make for more of a responsive feel when gaming.

Gamers can also turn on a blur-reduction mode that uses a backlight-flickering technique to reduce the appearance of blur. This joins several other modes which we’ll talk about more in the image quality section.

Then it’s just a matter of connecting up your cables. Those that want to take advantage of the headphone output can just plug there headphones straight in, with audio coming straight through from HDMI and DisplayPort sources. The microphone will require wiring in separately as will the USB ports. You do get the USB cable in the box but not the mic cable. DisplayPort and DVI cables are provided too.

For keeping your monitor in mint condition when not in use or when being transported BenQ also provides a plastic cover that slides neatly over the monitor.

When it comes to setting up the display, this is where the little remote comes into its own. There’s no need to poke around the array of buttons on the right edge to get to the settings you need but rather a scroll wheel and back button quickly allow you to navigate the OSD.

The menu itself is decent, though quite a few of the functions are duplicated in different menus and there are so many different extra modes and features that it’s quite daunting. Nonetheless, it’s a decent selection that means you should be able to tweak the picture to just how you like it. 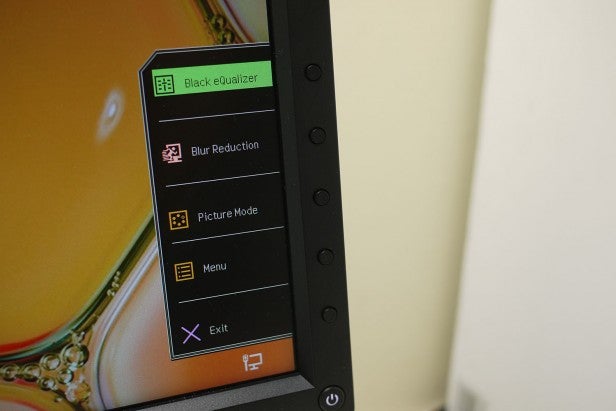 We’d suggest starting off by going to Standard mode and turning all the extra features off, choosing the user defined colour temperature (100 on everything), 40 brightness, 50 contrast, 5 contrast, 5 sharpness and 3 Gamma.

BenQ also provides a couple of software features to go with the XL2730Z. Display Pilot, which can be downloaded from the BenQ website, provides options for rotating the display both automatically and manually. It also has a screen partitioning tool that allows you to divide the screen up into multiple sections, a bit like with Windows Snap but a customisable version.

You can also setup game profiles to automatically switch the monitor into a certain mode when a game is launched. However, none are yet available for the XL2730Z.