Back in November Benny came away rather nonplussed from quality time spent in the company of BenQ’s W10000 projector. Not because it was no good as a performer; on the contrary, its movie-playing qualities were impressive. But it just seemed way too pricey for today’s marketplace.


Cue BenQ’s W9000, which lops off the odd feature here and there but sells for well under half the price of its flagship sibling. Provided the picture quality hasn’t taken too much of a hit during BenQ’s bid to keep costs low, this could be a massively more appealing proposition.


One promising bit of news right away is the fact that the W9000 is impressively well built. It weighs a tonne, hinting at quality innards and a sound-damping chassis for reducing the projector’s running noise. It’s not exactly the prettiest projector around in its rather angular lines and ‘industrial’ finish, but it certainly looks serious, and that will give it appeal enough in many home cinephile’s eyes.


The build quality even extends to the W9000’s lens array, which feels emphatically robust and a million miles away from the flimsy plastickiness of Optoma’s rival HD80 projector. 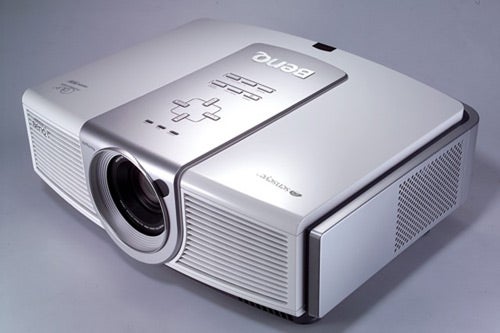 Why do we mention the Optoma HD80 in particular in this review? Because like the W9000 the HD80 (which we reviewed a few weeks back) is a full HD DLP projector selling for what is, by today’s standards a very affordable price. In fact, it is actually a few hundred quid cheaper than even the W9000, but the BenQ’s superior build quality is already going some distance towards explaining the difference.


Setting the W9000 up is surprisingly easy for the most part. Zoom and focus can both be set electronically rather than fannying about with the usual imprecise zoom and focus rings around the lens. Plus you can also use the remote to shift the image vertically to help get it in the right place on your screen, and call into play digital keystone correction if your image’s edges initially appear at an angle.


The only limitation we spotted during set up is the paucity of optical zoom on offer. The zoom ratio is just 1.15, meaning there’s precious little variation to help the W9000 fit into wildly different room sizes. To give you some idea of whether the W9000 has any chance of fitting into your viewing environment, BenQ suggests that you should be able to get a 100in image with around 4m between the projector and the screen.

While we’re on the subject of lens capabilities, we should add on a more positive note that – as BenQ seems very keen to tell us – the W9000 is compatible with Panamorph technology. Which is to say that you can screw to its lens barrel a special lens (the P380-2) from third party specialist Panamorph which allows you to enjoy 2.35:1 aspect ratio films without any black bars or distortion on a 2.40:1 ratio screen.


So far as we could tell, Panamorph lenses don’t currently have a UK distributor, but they’re available from the US for around $495.

If you’re a dedicated black bar hater and love the sound of this feature, though, please bear in mind that it’s not actually unique. For while BenQ plasters the Panamorph logo on the W9000’s box and crows about Panamorph in all the W9000’s literature, the same lens compatibility can also be found on projectors from rival brands as diverse as Optoma, JVC, Sim2, Sony and InFocus. It’s just that these rivals don’t tend to make such a song and dance about it.


Heading back into less esoteric waters with the BenQ W9000’s connections, there’s a surprising disappointment in store with the discovery of just a single HDMI input. This really isn’t enough in these days of Sky HD receivers, Blu-ray players and HD games consoles.


There’s some compensation for this in the form of two component video inputs for analogue HD playback, but the preference for analogue HD sources over digital ones seems totally out of place as we head into 2008.


Other jacks of note include PC support (via one of the component inputs), a 12V trigger jack for driving an electronic screen, and an RS-232 port via which, we’re pleased to say, it’s possible for a trained engineer from the Imaging Science Foundation to professionally calibrate pictures to suit your specific domestic environment. This level of customisation is unusual at the W9000’s price point.

Trawling the W9000’s menus for further features of interest quickly reveals that, as we’d hope of a full HD projector, it’s capable of receiving the ultrapure 1080p/24fps format now output by many HD disc players.


Then there’s BenQ’s proprietary Senseye technology, which can automatically adjust the bright and dark areas of an image separately, introduces plenty of fancy noise reduction circuitry to boost the appearance of relatively weak sources, and incorporates a dynamic iris system that reduces the light output from the projection lamp during dark scenes, in order to make black levels look more profound.

Other bits and bobs include 3D colour management, 200W and 250W lamp output options depending on whether you want to emphasise contrast or brightness, Faroudja’s DCDi system for reducing the jagged look often seen around the edges of contoured objects; and even a few picture in picture options.


Wrapping the W9000 backgrounder up with a few specifications of note, we find the full HD resolution being joined by a high claimed contrast ratio of 8500:1, fair brightness of 1200ANSI Lumens, and an 8-segment colour wheel that uses a ‘special’ coating to project more natural red and blue tones – without spoiling greens. With so many things apparently going for it, then, the W9000’s pictures have to count as a real disappointment.


The single greatest problem is that images don’t seem very bright at all, a flaw that sees them lacking punch and dynamism and leaves them pretty much completely unwatchable if there’s even a trace of ambient light in your viewing room. The general dullness of the picture extends to its colours too, which look rather flat and lifeless. And before you ask, yes, this remains the case even if you use the 250W light output option rather than the 200W one. 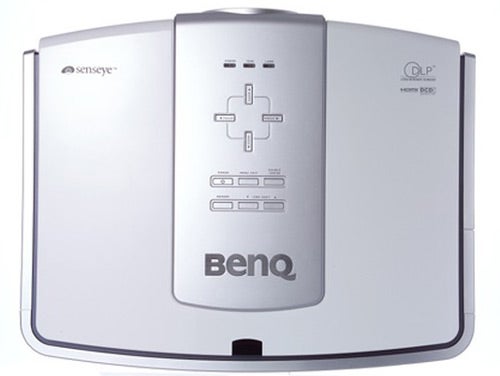 The dullness issue is ironically exaggerated, too, by something that’s supposed to improve the picture quality: the Faroudja DCDi system. For oddly this seems to cause over-stressing of contoured edges, so that they stand out from the muted images around them like the proverbial sore thumb – at least when viewing standard definition sources.


The general lack of brightness around with the W9000 might be slightly easier to accept if it seemed to help the projector deliver really outstanding black levels. But while dark scenes certainly don’t suffer badly with the tell-tale greying over that embarrasses projectors with contrast problems, nor does the colour black look as profoundly deep and rich as we might have hoped. Especially as there are no dramatic brightness counterpoints which might throw what black response there is into starker relief.


Given how good the W10000’s pictures were, mind you, it’s inevitable that the W9000’s pictures aren’t an unmitigated disaster. HD images, for instance, benefit from some good sharpness and detail resolution, all delivered without a hint of grain or dot crawl noise. There’s no colour ‘smudging’ or edge moiré either provided you use the projector’s pixel-for-pixel 1080p playback mode either, and objects glide across the screen largely free of any stutter or, even better, DLP’s tendency to blur or generate fizzing noise over horizontal motion.


The 8-segment colour wheel, meanwhile, helps to keep DLP’s ‘rainbow effect’ (where you can see pure stripes of red, green and blue flicker around in your peripheral vision) to an absolute minimum, and the density of the projector’s full HD pixel array ensures that colour blends appear smooth and natural, without any striping problems.


Although we managed to finish our main test with a high or two, the over-riding fact about the W9000 is that you only spot its good points if you really make the effort to look beyond its bad ones. And while this is something a reviewer should do, it’s hard to see why a normal punter should do the same – especially when the machine asking them to forgive its bad points has just cost them the best part of two grand.