Setting the BenQ W770ST up is a mixed experience. On the physical side, while the amount of optical zoom on offer is pretty satisfying, there’s no optical vertical image shifting. This latter issue will mean that most users will have to depend on the projector’s keystone correction system to get the edges of their images looking straight – not ideal when you consider that keystone correction is essentially a digital distortion of the incoming image.

It must be stressed, though, that vertical image shifting is pretty much non-existent in the sub-£1,000 sector of the projector market, so the W770ST’s lack of it is hardly a surprise or something that can really be held against it.

Especially as its onscreen menus are actually rather well equipped with picture calibration tools. Among the highlights are a colour temperature fine tuner, a noise reduction system, a variety of gamma settings, and adjustment of the hue, gain and saturation of all six of the primary and secondary colour components.

The projector also carries DLP’s Brilliant Colour option for boosting saturations, and stands out from most projectors by having not two but three projector lamp settings: normal, Eco and Smart Eco. This latter mode adjusts the lamp output according to an analysis of the image content, reducing it for dark scenes and boosting it for bright ones.

The Smart Eco mode is primarily designed to deliver energy savings.
However, the setting also proves a surprisingly handy dynamic contrast
system that palpably boosts the image’s contrast without leaving it
looking too unstable or the projector’s running noise sounding too
uneven. As a result it was this lamp setting that we stuck with during
most of our testing. 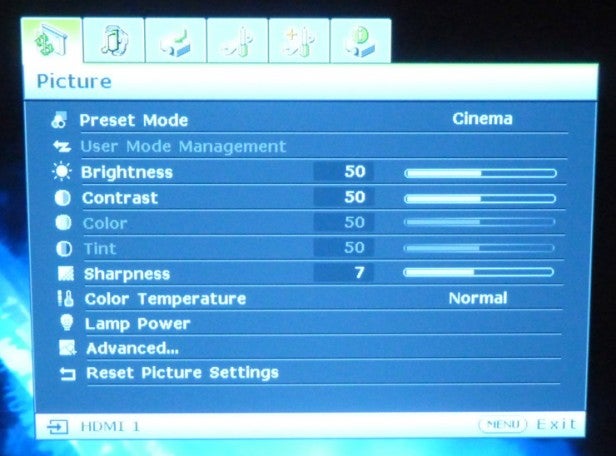 With other recent budget BenQ successes still fresh in our minds, we had high hopes for the BenQ W770ST. And for the most part it didn’t let us down.

Right away we were struck by the image’s dynamism, as the projector combines a really startling level of brightness and colour saturation for a budget projector with a deeper black level response than we’d normally expect for under £700. Certainly we couldn’t imagine a similarly affordable LCD projector being able to get close to the W770ST’s black levels.

It has to be said that the sense of dynamism owes slightly more to the projector’s really intense brightness output than it does to its rendering of blackness. In other words, while images that combine a mixture of bright and dark content look rich in contrast because of the intensity of the bright areas, more uniformly dark scenes can look rather greyed over.

Even during these moments, though, the level of greyness is by no means as severe as might have been expected, and doesn’t stop you from feeling engrossed in the scene.

It helps in this respect that the W770ST is able to resolve fair amounts of shadow detail in dark scenes rather than leaving them looking painfully hollow – especially if you’re using the Smart Eco lamp setting in conjunction with the projector’s Cinema preset.

This setting combination, incidentally, also proved the best in terms of the projector’s running noise, keeping it down to a level we scarcely noticed (versus quite distracting levels if you leave the lamp on its Normal setting or use the Standard image preset).