The W770ST is the latest in a long line of startlingly affordable home entertainment projectors from BenQ. Despite being available for just £679, this DLP model includes 3D playback, a promising 13,000:1 contrast ratio, a high claimed maximum brightness of 2500 ANSI Lumens and a large maximum claimed image size of 300-inch. What’s more, as the ST part of its name reveals, it carries an ultra short throw lens so it can deliver its big images from much shorter throw distances than usual. 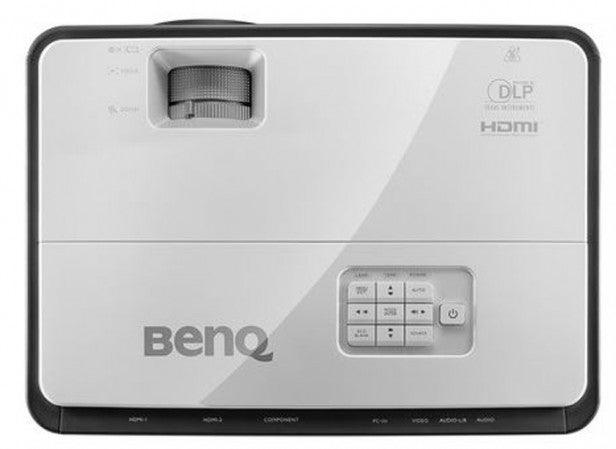 Aesthetically, the W770ST is an oddball. It looks like two separate
bits of kit strapped together thanks to the way its upper half suddenly
bulges and angles out from the much smaller, more straightforward
rectangular bottom half. Thanks to its combination of a gloss white top
and tastefully contrasting grey sides and front, though, its
unconventional looks don’t spill over into ugliness.

It’s worth adding, too, that the W770ST’s footprint is pretty small by projector standards, making it easy to put away when you’re not using it, or easy to carry around to friends’ houses. BenQ has even included a free carry bag with the projector.

Connectivity on the W770ST is as expected, with highlights of two HDMIs, a component video input, and a D-Sub PC port. The projector features audio inputs too, as in keeping with most cheap projectors these days it sports a built-in 10W speaker system so that casual users don’t always have to be worrying about finding an external audio system to go with the projector every time they want to use it.

Speakers built into projectors are hardly ideal, partly because they’re almost always very underpowered, but mostly because the sound they produce appears to be very dislocated from the pictures it’s supposed to be accompanying. However, this dislocation effect is not quite as severe a problem with the W770ST as it is with most projectors for the simple reason that its short-throw lens means it will likely be positioned well in front of you and nearer the picture than most projectors.

Talking of the projector’s short-throw lens, as an example of the sort of setup we’re talking about you can get a near-63-inch image from a throw distance of just one metre, which is damn impressive.

Remarkably for such a cheap projector, the BenQ W770ST supports not just 3D playback, but 3D playback with Triple Flash technology. Once the exclusive domain of high-end big hitters like Sim2, Triple Flash is now integrated into even affordable new Texas Instrument DLP chipsets, and triples the frame rate of 3D images from 48Hz to 144Hz to reduce crosstalk and flicker while also giving a more natural 3D experience.

Among all this strikingly positive features, though, there are a couple of reminders of the BenQ W770ST’s budget nature. First, you don’t get any 3D glasses included free. Second, the W770ST isn’t a full HD projector; it’s only a 720p model. It’s been a long time since we tested any video device without a full HD pixel count, and obviously there’s more chance you might spot the reduction in resolution when watching a picture of the sort of serious size you get from a projector.

Hopefully this won’t prove to be a serious problem for the W770ST.

Next
Set Up and Picture Quality Review