You don’t need to look very deeply to understand why the BenQ W703D projector has really got our attention today. For despite claiming a high brightness of 2200 ANSI Lumens, a respectable 10,000:1 contrast ratio and even built-in 3D playback, this remarkable little single-chip DLP beast can be yours for under £500. Including VAT. Surely there’s got to be an almighty catch somewhere?

If there is, though, it has nothing to do with the BenQ W703D’s looks, which are actually rather cute. The way the top edge is much wider than the bottom leads to a quirky but appealing angular look to the front and back sides, while the top plate looks slinky in its glossy white finish.

Connections on the BenQ W703D’s rear are also perfectly adequate for a projector with such a low price, including as they do two HDMIs, a component video input, a composite video input, a D-Sub PC port, an RS-232 control port, and even a selection of audio jacks to feed the W703D’s 10W speaker. 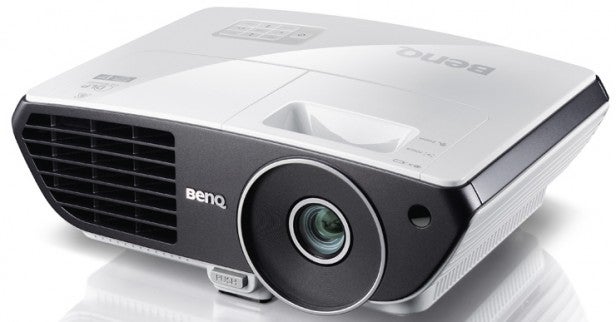 Clearly the sound produced by this speaker can’t match the scale of the projector’s pictures or even sound like it’s coming from anywhere near the visual action. But it’s a simple and immediate solution for people who don’t have a separate audio system for their AV sources.

Although as noted at the start of this review the BenQ W703D mostly boasts specifications that exceed the expectations raised by its price, there is one major compromise: a native 720p resolution rather than a 1080p Full HD one. This is clearly a painful loss to video enthusiasts who like their 1080p HD Blu-ray sources to be rendered on a pixel for pixel basis. Though it’s worth pointing out that the 720p format actually fits rather nicely with the resolution of Sky’s 3D channel.

Needless to say we’ll be looking closely at how well the BenQ W703D ‘downscales’ full HD sources later on.

You operate the BenQ W703D via a decent remote control complete with large buttons, a reasonably logical layout, and bold red backlighting. As for the projector’s onscreen menus, meanwhile, although they’re a bit bland they get the job done reasonably efficiently.

Among the more helpful tricks available are the option to tell the projector the colour of the wall you’re projecting it onto (it then adjusts its pictures to compensate); a handy auto keystone correction system; a 2D to 3D conversion system; themed presets including living room and cinema options, plus a couple of user-definable setting memories; the option to turn DLP’s Brilliant Colour processing on or off, and even a pretty flexible colour management system. Impressive stuff for a sub-£500 projector. 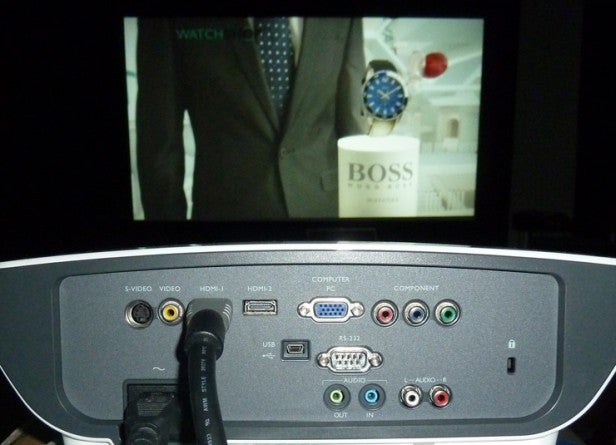 Getting the BenQ W703D pictures correctly positioned on our 100-inch screen wasn’t particularly easy. Optical zoom provision is pitifully small, meaning that for the most part you have to physically move the projector towards or away from the screen to get the picture size right. Also disappointing – though utterly predictable for the BenQ W703D’s money – is the lack of any optical image shifting, be it horizontal or vertical.

Hence our appreciation of the auto keystone system mentioned earlier, as it takes the hassle out of straightening the picture’s sides. Though of course, we must stress that really no type of keystone correction is ideal, as it essentially involves distorting the incoming images.

One last adjustment worth mentioning is the option to run the projector’s lamp in an Eco mode that ups the lamp’s life to an impressive 6,000 hours, while also reducing the projector’s running noise. The catch is that brightness levels take a hit – though not by as much as you might think.

After being underwhelmed recently by the company’s more expensive BenQ W1060 home entertainment projector, we didn’t have high expectations for the W703D. But we’re happy to say it confounds these negative expectations in almost every way that seriously matters.

Kicking off our tests with 2D, we were struck right away by the image’s potent combination of brightness and contrast. It’s by no means uncommon for a budget projector to go strong on brightness, as this is crucial to the data/presentations projection world that most budget projectors are, in truth, designed for. But for a projector to partner high levels of brightness with any sort of black level response like the BenQ W703D does is extremely rare. In fact, we’d go so far as to say that we’ve never seen a projector as cheap as the W703D deliver such acceptable black levels. 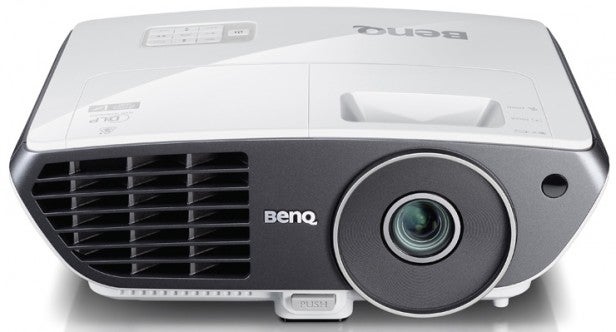 Dark parts of predominantly bright images don’t exhibit the usual budget blue or grey tone nearly as severely as normal for this price point, while predominantly dark scenes exhibit less aggressive ‘grey mist’  than usual with budget projectors. Indeed, the BenQ W703D’s contrast performance is to our mind better than that of the previously reviewed and more expensive W1060.

Watching material with a mixture of bright and dark content also reveals another startling strength of the BenQ W703D: minimal trouble with the rainbow effect. This RGB striping problem is rife on cheap – and even some not-so-cheap – single-chip DLP projectors, yet while the W703D certainly isn’t immune to it, it’s less of a distraction than we would have dreamed possible for under £500.

Similarly, while dark scenes on cheap single-chip DLP projectors tend to suffer with pronounced levels of greenish dot crawl, the BenQ W703D keeps this at a much more subdued level than expected, to the point where it isn’t really a problem at all from a sensible viewing distance.

Thanks to its striking combination of brightness and at least passable black levels, the BenQ W703D’s pictures hold up well whether you’re watching them in ambient light or total darkness. This makes it just the sort of ‘flexible friend’ a relatively casual projector user will likely be after. 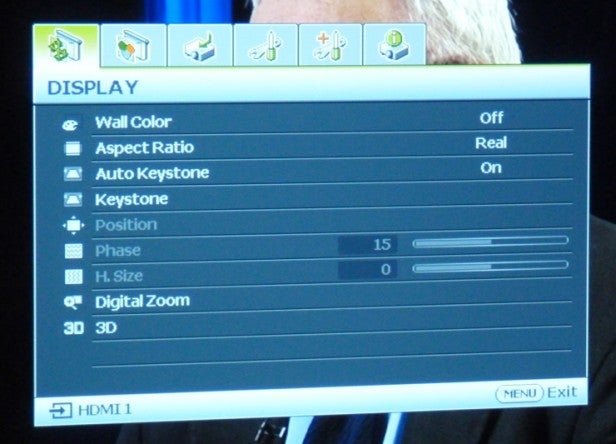 Respectable black levels like those delivered by the BenQ W703D are usually a good starting point for a believable colour palette. And so it proves with the W703D. In fact, over time the W703D’s colour handling became our single favourite part of its performance. Not because it’s perfect, of course; you’re not going to get perfect for under £500. But simply because it’s in a completely different league to the washed out, over-cooked or PC-biased tones you almost always get with sub-£800 projectors.

Skin tones, for instance, avoid remarkably well the orangey, yellowy, reddish or greenish undertones we’d have expected, instead looking startlingly believable across all sources – even standard definition ones.

Rich tones like those in animated films, meanwhile, really leap off the screen, while also being able to draw from a wider palette than is common with a budget projector. This makes bright, colourful material look dynamic and bold yet also credible. Even colours during dark scenes hold up well, thanks to the BenQ W703D’s relative lack of the grey or blue undertones you usually get with budget projectors.

The BenQ W703D even surprises us with its sharpness. For despite its 720p resolution it does a perfectly solid job of shifting 1080p sources down to 720p. Detail levels still look high, and there isn’t that sense of softness and shimmering edge noise you commonly get with budget downscaling systems. Certainly you’re never in doubt that you’re watching a HD source rather than a standard definition one.

For all their excellence versus any other similarly cheap projector pictures, the BenQ W703D’s images inevitably aren’t perfect. Skin tones can look plasticky at times, especially when you’re watching standard definition. Very bright elements of the picture can look rather bleached out too, as the projector fails to delineate subtle greyscale shifts at the white end of the spectrum. 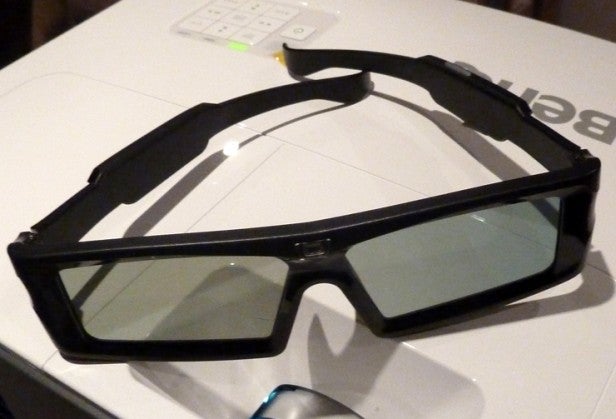 As is usually the case with cheap single-chip DLP projectors, meanwhile, there are a couple of motion problems. First, 24p sources exhibit a degree of judder during camera pans, and second, flesh tones occasionally exhibit signs of dotting noise caused by the DLP colour wheel – though this latter problem in particular is not as intrusive as might have been anticipated.

Next, the use of a 720p DLP system means that if you’re using a relatively large screen you’re more likely to notice the grid-like pixel structure that makes up the pictures – especially if you’re also sat relatively close to your screen. This visible pixel structure can also cause minor jaggies around curved edges.

While colours are impressively dynamic and natural for much of the time, meanwhile, they do lack finesse, resulting in some striping and blocking artefacts at times as the projector fails to resolve every tonal shift subtlety. If you try and push the projector’s brightness and especially contrast levels too high, moreover, pictures can start to exhibit colour noise and break up.

The BenQ W703D’s most disappointing weakness, though, is 3D. When in 3D mode the picture seems to lose pretty much all contrast and black level response, causing dark 3D scenes to look painfully washed out, short of background detail and, as a result, flatter than they do in 2D. What’s more, 3D viewing also uncovered one or two rather nasty colour glitches as the projector worked harder to combat the dimming effect of the active shutter glasses.

The BenQ W703D’s 3D pictures do contain a decent amount of detail and avoid pretty much all crosstalk ghosting noise. But still, if you’re a serious 3D fan, the BenQ W703D is not going to scratch your 3D itch.

Let’s finish on the positive note, the W703D overall comfortably deserves, though, by saying that considering how bright and punchy it is, it really doesn’t put out much running noise at all – especially if you can live with the Eco lamp mode.

The BenQ W703D has come out of nowhere to become one of our favourite AV products of the year. It completely rewrites the budget projector rulebook, delivering some genuine AV picture thrills – in 2D mode, at any rate – at a far lower price than such quality has ever been seen at before.

Finally we have a convincing answer to give to all those people who regularly ask us if there’s a good movie projector around for less than £500.