It’s been a very long time since a new BenQ home cinema projector crossed our path. August 2008, to be precise – and even that model was a cheapo LCD job rather than one of its traditionally impressive DLP home theatre specials.


The last DLP model, in fact, was the W5000, way back in May 2008. But today, at long last, the sequel to that excellent model, the cunningly titled W6000, is finally sat on our projector stand.


And it looks like it means business, thanks to an unusually large body for a sub-£3,000 machine – especially as its inherent chunkiness is rather emphasised by a rather cumbersome high-sided design that falls comfortably short of Sony’s recently tested VPL-HW15 projector in the sculpting stakes. 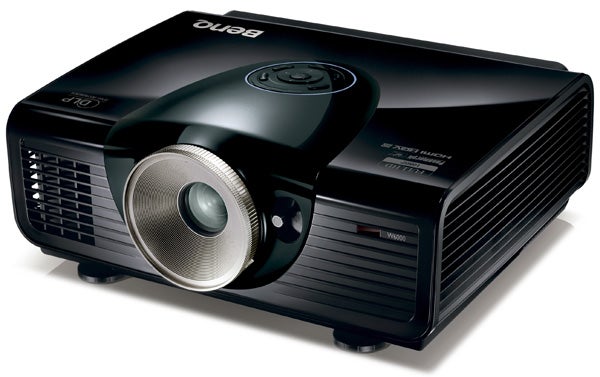 That’s not to say the W6000 is actually ugly, though. Its finish is deep and glossy enough to make it look at least a bit posh, and the slightly different colour and finish of the rounded, raised section around the centrally mounted lens is a cute touch.


Having just mentioned the lens, I might as well add here that the W6000 supports the addition of a Panamorph lens if you want to display a true 2.35:1 aspect ratio.


The only serious concern I’d have about the design is that there’s quite a large vent in the front left corner of the projector (as you look at it), from which there’s slightly more light leakage than I’d ideally like to see. It’s not bad enough to seriously disturb your viewing, but it does at least suggest that maybe the W6000’s chassis isn’t quite as clever about dissipating heat and noise as some of its rivals. More on this later.

The W6000’s connections are exactly as we’d expect. Which is to say they include two HDMIs, a D-Sub PC port, a component video input, an RS-232 for external control, and a 12V trigger output for automatically firing up a motorised screen. Further multimedia hopes for the W6000 were momentarily raised by the discovery of a USB input, too, but on closer examination this port – a Type mini B affair – is used for servicing purposes only.


Getting the W6000 up and running really couldn’t be easier. You can optically shift the image horizontally or vertically via an incredibly simple little joystick arrangement on the projector’s front edge, and the zoom and focus rings around the lens are both easy to operate with precision. The 1.5:1 level of zoom is pretty good too.

The W6000’s onscreen menus continue the ease of use theme by being clear and sensibly structured, and even the remote control – traditionally a weak point of projectors – is pretty much a paragon of sense, with its bright backlight and spacious, logical layout.


Don’t let the W6000’s approachability fool you, though. Underneath the cuddly surface beats a serious home cinema heart, complete with more than enough picture setup flexibility to satisfy tinkerers and even installers. 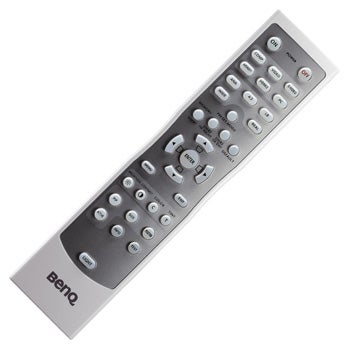 Among the most useful fine-tuning options are a gamma adjustment; a good degree of colour management; a Clarity control option that includes noise reduction, detail enhancement, Luma Transmission and chroma transmission tweaks; a film mode; and an on/off toggle for Texas Instruments’ Brilliant Colour system, designed to soup up DLP technology’s colour palette.


So very flexible is the W6000, in fact, that it’s supported by the Imaging Science Foundation (ISF), meaning that it ships with ISF day and night picture presets that an ISF engineer could use to optimise picture quality for your specific viewing room conditions.


Digging even deeper into the W6000’s specification, I discover first that the video processing comes courtesy of the impressive Hollywood Quality Video (HQV) system – a fact which should make the W6000 unusually good at showing standard definition sources. 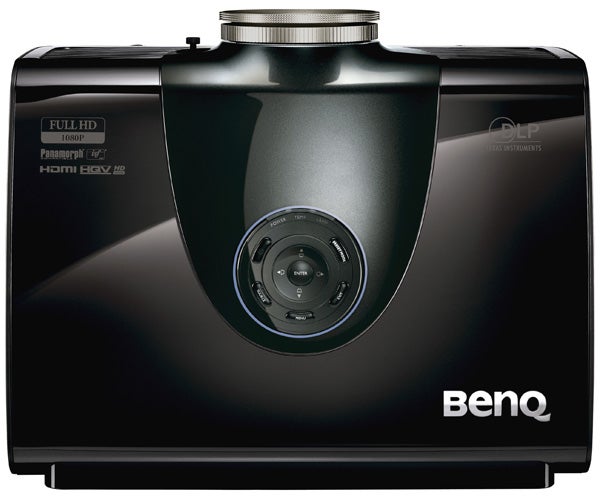 Next there’s VIDI Lighting technology, which ups the projector’s brightness – and its red and blue colour response by around 15 per cent – by delivering more lumens to your screen than most rival systems and lamps. It has the numbers to back this story up too, combining an extremely impressive claimed contrast ratio of 50,000:1 with an even more startling claimed brightness of 2,500 ANSI Lumens.


As always, these sorts of figures need to be taken with a massive pinch of salt. But they still suggest that the projector should deliver that Holy Grail of home cinema projection: bright punchy images which don’t have to have all their brightness stripped away to contain credible black levels.


The W6000’s native resolution is, inevitably, Full HD, meanwhile, and there’s a healthy 10-bit processing engine on hand to boost the intensity and gradation of colours.


The first thing that hits you about the W6000’s pictures is how superbly intense and vibrant they look by sub-£3,000 projector standards. And there seem to be no less than four main reasons for this.


First and most obvious, the picture is extremely bright. Obviously you don’t get the full 2,500 claimed Lumens on screen if you’re using any half-sensible picture settings, but there’s still no doubt that the image reflects off my screen much more aggressively than is usually the case on anything less than megabucks projectors. This makes the W6000 an unusually good option for its price point for anyone with a really large – 120-150in – screen.

The next thing that helps the W6000’s pictures look so dynamic is the fact that its startling brightness levels don’t prevent it from also producing a really deep black level response. So while light scenes look searingly bright, dark scenes look decently – if not class-leadingly – black.


Even better, the W6000 is very accomplished at rendering those tricky shots where you’ve got a mixture of very bright and very dark elements within the same frame, and its strong combination of contrast and brightness enables it to reproduce subtle shadow details more successfully than many of its peers.


The final major factor in the W6000’s intense HD picture is its sharpness. It can reproduce HD sources with pixel-perfect precision, right down to the celluloid grain reproduced on many Blu-rays. This helps pictures look more three-dimensional as well as, of course, ensuring that they look blisteringly crisp.


The W6000 isn’t only good with HD, though. As predicted, that HQV processing makes the W6000 quite accomplished at showing standard definition too. Certainly it looks markedly sharper – without source noise being unduly emphasised – than many rivals in its price bracket, with the only negative being a tendency for some edges to look a touch over-stressed. 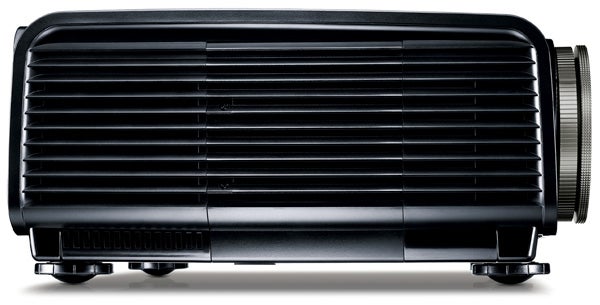 Make no mistake about it people: when the W6000 looks good, it really does look very good indeed. But I do have one or two issues with it too.


First of all, it’s a touch susceptible to a couple of classic DLP problems. For instance, as I often find with affordable but very bright DLP projectors, even though the W6000 uses a six-segment colour wheel, there’s still occasionally evidence of the rainbow effect, where red, green and blue stripes flit momentarily around your peripheral vision.


I should stress that this only happens when a shot has very bright and dark elements together, such as a credit sequence, with white letters over black backgrounds. But if you’re one of those people who are particularly susceptible to seeing the rainbow effect, then it’s something you need to try and check out in a demo room before committing to buying a W6000.


The W6000 also suffers a little from DLP’s motion handling issues. This can find motion looking a touch blurred when it’s really fast, such as during quick camera pans or football matches. In fact, while playing FIFA 10 on my Xbox 360 I even spotted traces of dithering noise (small, momentary dotty trails) behind the players whenever the virtual camera panned to track the ball following a big clearance or goal kick. I wouldn’t say that this dithering is ever really noticeable with video viewing.

Another issue I have with the W6000 concerns its from-the-box settings. I found I really had to do quite a bit of recalibration work – especially in the colour and gamma departments – before I arrived at a picture that looked natural and cinematic rather than garish.


Next on the negative list is the noise the projector’s cooling fans make. For although the noise is, at least, smooth and consistent, it could be really quite invasive if your viewing position is anywhere near (within three or even four metres) the projector’s position. Even switching the lamp output to its lower-brightness Economic mode doesn’t ramp the noise down much.


It looks like the concerns I raised earlier about the W6000’s design potentially struggling to dissipate heat well seem disappointingly justified. 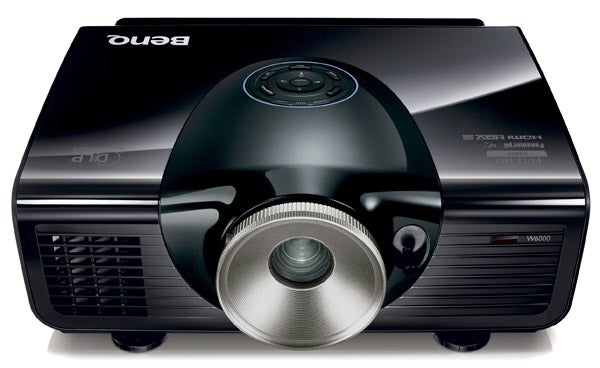 Even more aggravating than the cooling fan noise, is the loud grating sound emitted by the automatic iris whenever it opened or closed in our review sample. So distracting was this, in fact, that for me it made serious viewing of a film with the dynamic contrast mode engaged pretty much impossible.


The grating iris wasn’t the only problem I had with the W6000’s dynamic contrast system either. For I also found it disappointingly unsubtle in its effects, producing some occasionally quite jarring shifts in overall brightness levels.


You can, of course, turn off the dynamic contrast system that drives the auto iris, and thankfully even if you do this black levels remain good. But this clearly robs you of the maximum contrast performance the projector is capable of.


With the W6000, BenQ has conjured up a bold, brash, dynamic projector that outshines most, if not all, rivals in its price bracket when it comes to brightness and colour. While this gives the W6000 immediate ‘shelf appeal’, though, and may help it gain an immediate advantage in any head-to-head shoot-outs, the longer you live with it, the more clumsy some aspects of its implementation start to appear. Especially if you can’t build the thing into a soundproof box!