When I tested BenQ’s W1000 projector recently, I stupidly thought that at £998, it was cheap. Turns out, though, that BenQ had a whole other idea of ‘cheap’ waiting in the wings: the W600. For despite being HD Ready and boasting some other startlingly high spec numbers we’ll get to in a minute, the W600 is just £499. Good and, indeed, grief.


This price comes despite the W600 boasting the same 3,000:1 contrast ratio as the W1000, and a brightness figure which is actually higher – at 2,600 ANSI Lumens – than the 2,000 ANSI Lumens quoted for the twice-as-expensive W1000. What’s more, BenQ also assures us that the W600 uses the same six-segment colour wheel found on the W1000. All of which has got me wondering, to be honest, if the W600 might actually make the W1000 seem rather redundant… 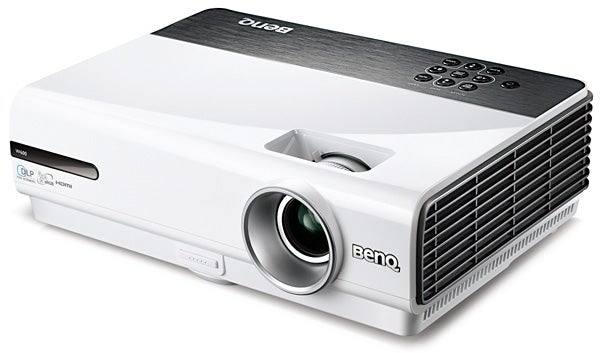 Fans of aesthetics, however, will definitely not consider the W600 as the model to choose over the W1000. For while the W1000 was no oil painting, the W600’s gloss white finish and a slightly metallic looking top strip can’t hide the fact that it resembles your average imagination-free data or education projector, rather than something designed from the off to grace a coffee table in a swish living room.


The W600 matches its sibling slot for slot when it comes to connections, though. Each has two HDMIs, as well as component video, composite video, S-Video and analogue PC inputs. Plus each has audio inputs, in PC and RCA flavours, for the simple reason that each projector has a built in audio speaker.


This makes sense at the ‘casual’ end of the projection market, since there’s a good chance that such projectors will be just brought out of a cupboard when and where they’re wanted – a situation which hardly lends itself to somehow sorting out an audio feed from some sort of separates system. The W600’s speaker is a mere mono 2W affair, mind you, making it a whole third less powerful than the one found in the W1000. Which actually creates a significant performance difference, as we’ll discover later.

As you’d expect with a cheap projector, the W600, like the W1000, sports a fairly short-throw lens, so that it can produce decent-sized images without needing a dedicated home cinema space. For instance, you can typically get a 59.5in picture from a 2m throw distance. Please note, however, that the W600 has practically no optical zoom at all; just 1.15x, which is even less than you got with the also-limited W1000.


It’s quickly apparent during set up, too, that the W600 shares its costlier sibling’s lack of any vertical or horizontal image shifting, leaving you very likely having to use keystone correction – effectively a digital distortion technique – to get pictures appearing on your screen or wall with straight edges.


I know that limitations of this sort are fairly common at the budget end of the market, but I have to say that the W600 seems unusually inflexible, to a degree which might cause a headache for some casual users who just want to plonk the projector on the most convenient coffee table. With the W600 you’ll likely have to shift the coffee table around.

Rather startlingly for its money, the W600 boasts a couple of key DLP performance enhancement features: BrilliantColour and Unishape Lamp lighting. The former, designed by Texas Instruments, boosts mid-tone colours to produce a more vibrant, brighter colour palette, while the Unishape system adapts the light output to ‘mesh’ with the 6-speed colour wheel, thus reducing dithering noise and enhancing colour saturations and gradations.


As if all this wasn’t enough, the W600 even includes a reasonably lengthy selection of picture adjustments, complete with a handy set of presets, user memory preset slots, and even the same colour management system found on the W1000. This latter tool is sophisticated enough to let you adjust the huge, gain and saturation of the red, green, blue, cyan, magenta and yellow colour elements.

All in all I actually spent a good few minutes tinkering with the W600’s settings – not something I’d normally expect to even have the option to do with such a cheap projector.


In some ways, the results of my tinkering were really good. Particularly amazing – and I don’t lose that word lightly – for a £499 projector is the picture’s sheer dynamism. By which I mean that the W600 actually manages to combine some impressively deep black levels with pretty extreme levels of brightness.


Regarding the black levels, there’s way, way less greyness to contend with than you’d get with any LCD projector at anything like this price point. Even Optoma’s similarly priced GT7000 DLP projector is left looking pretty cloudy by comparison. In short, the W600’s black levels are the best I’ve seen to date on an ultra-budget projector. 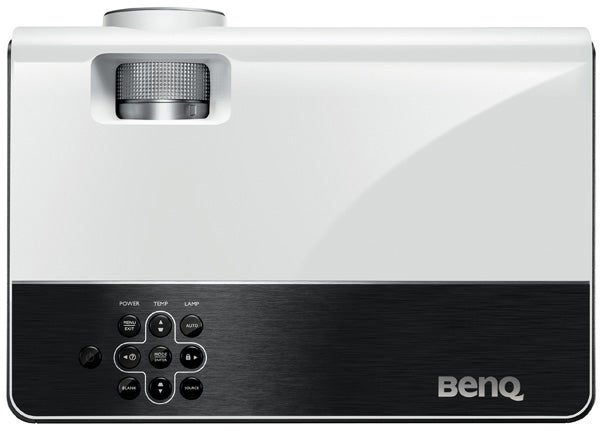 The brightness, meanwhile, is extreme enough to leave pictures genuinely watchable in a degree of ambient light – a potentially very attractive feature to your typical casual projector user, for whom total room darkness is seldom easy to achieve. This W600’s brightness also ensures that colours are delivered with serious punch, even using the relatively (sensibly!) subdued Cinema picture mode. The colour vibrancy is lifted another gear, too, if you bring BrilliantColour into play.


Not surprisingly given its reduced native resolution, the W600’s HD pictures don’t look quite as sharp or polished (thanks to occasional evidence of pixel structure) on my 100in screen as those of the Full HD W1000. But they still look emphatically HD, which is actually quite an achievement on such a cheap and cheerful HD Ready machine.

So far, so good. But from here on we run into a spot of bother. For as I have to admit I’d feared, the W600 is plagued rather distractingly by DLP’s ‘rainbow effect’. This finds stripes of red, green and blue colour flitting around in your peripheral vision, and over bright parts of otherwise dark pictures if you move your eye over the image – or if there’s a camera pan.


Despite BenQ maintaining that the W600 uses the same colour wheel arrangement as the W1000, having run the two projectors side by side I’m convinced that the rainbow effect issue is worse on the W600 than it is on its costlier sibling (though this sibling is itself hardly immune to the problem). Maybe it’s just down to the W600’s extra brightness? Or just some subtle difference in the optics caused by the use of a lower resolution DLP chipset? I couldn’t say for sure. But what I do know is that there are times – dark scenes with bright bits in them, mostly – when the rainbow effect on the W600 makes a scene actually quite difficult to watch.


Another problem is that the W600‘s picture looks slightly noisier than that of the W1000. This is especially true if you use the BrilliantColour option, which makes skin tones in particular into a mess of dot crawl and colour noise. But even with BrilliantColor off there seems a bit more dot crawl around. 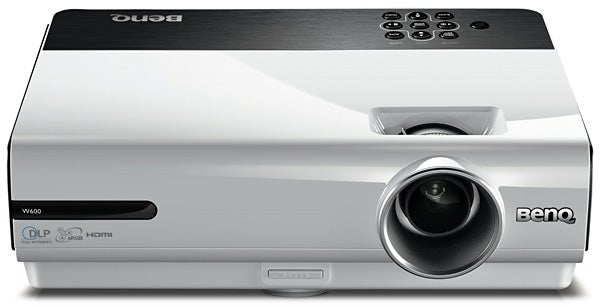 The relatively low resolution of the W600 and apparent step-down in video processing power from the W1000 (the W600 only claims 16.7 million colours versus the W1000’s claimed 1.07 billion) also prevents the W600 from delivering so much subtlety in colour tone and blend. In fact, I even spotted a little colour striping from time to time, and despite calibration, one or two colour tones – especially rich reds – always seemed slightly out of kilter with the rest of the colour palette.


Turning to the W600’s sound, it’s… functional. At best. As in, you can make out what people are saying, and it doesn’t distort. But it’s not as powerful, detailed or all-round satisfying as the surprisingly solid speaker in the W1000. A fact emphasised by the W600‘s slightly higher running noise (rated at 34/31dB versus the W1000’s 29-27DB).


When it’s at its best, the W600’s pictures, while low on subtlety, can actually look quite spectacular. The Favela level on ”Call of Duty: Modern Warfare 2”, the daytime battle sequences of the ”Braveheart” Blu-ray, the daytime scenes in the Bahamas in ”Casino Royale”, any number of bright, animated scenes… All these and more look really eye-catching, and as such are much more satisfying than you’ve any right to expect for £500.


However, there’s a price to pay for these good bits. For anything containing a mix of bright and dark material invariably falls prey to the rainbow effect, sometimes to an extent that really distracts from what you’re watching. And I’m saying this as a person who’s by no means as prone to seeing the rainbow effect as some other people I’ve known over the years. 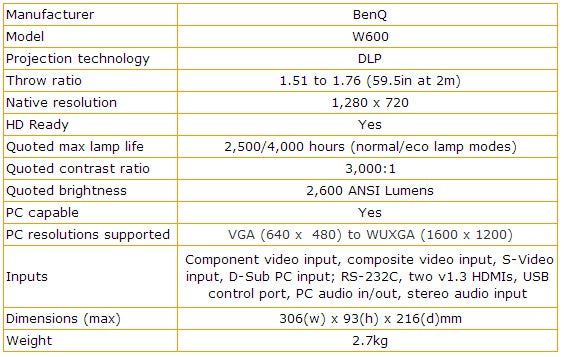