BenQ has proved rather frustrating in recent times by serving up a run of projectors that impress on many counts, but fall at one particular hurdle or another, be it price or some element of their picture quality. So all we can do as we start to tackle the brand’s new W5000 is hope that this is finally the model that lifts things from ‘good’ to ‘great’.


The first thing to say is that on the surface, at least, BenQ certainly seems to have got things right this time with its pricing. For despite being a DLP model with a Full HD resolution, we’ve found it going online for as little as £1,359.25 all in. Impressive. 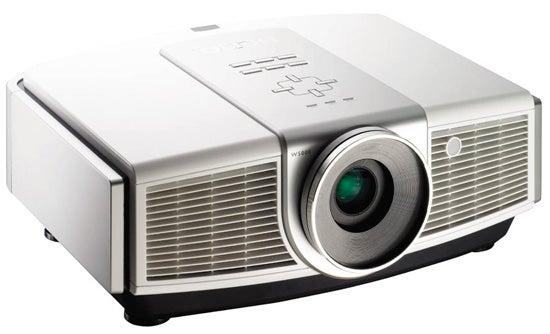 I’m appreciative of the fact, though, that BenQ has made some effort to ‘prettify’ the W5000 behemoth with the application of a glossy white and metallic silver finish. But at the same time I couldn’t help but feel that this finish actually looks slightly incongruously effeminate on what’s otherwise a butch hunk of raw AV power.


Turning to the W5000’s connections, there’s good news and bad news. On the upside, you get two HDMIs, BNC- and RCA-type component video inputs, PC inputs, a 12V trigger jack, and an RS-232 port for external system control. On the downside the HDMIs are only built to the v1.2 spec, not the latest v1.3, and so aren’t compatible with Deep Colour or x.v.Colour picture sources. 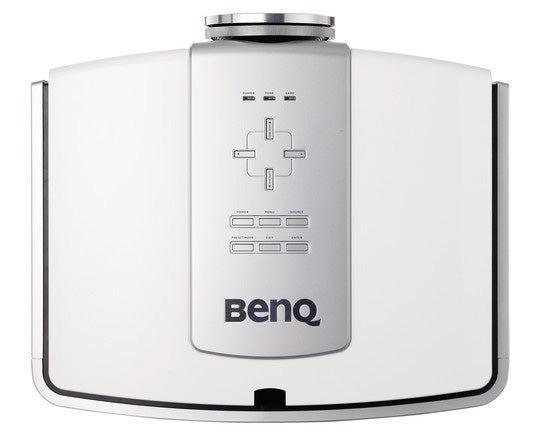 It’s worth adding, too, that BrilliantColour is supported by 4:4:4 colour sampling which handles each colour signal in the video input individually, and VIDI lighting technology, which increases the image’s brightness by 15% for showing red and blue colours, to deliver greater vibrancy and richer saturations.


A Dynamic Black facility, meanwhile, works in conjunction with what BenQ grandly calls an ‘Advanced Continuous Electronic Iris’ to deliver the best black levels possible no matter what the content of the image being received.


To be honest this feature is a little controversial, as it opens the door to the W5000’s image being as susceptible as most LCD projectors are to distracting brightness variations when pictures shift between dark and light content. But if you don’t like it, you can always turn it off. Especially since, with a claimed contrast ratio of 10,000:1, it’s entirely possible that the W5000 won’t need any help from a dynamic iris to deliver a really impressive black level response.

There are further tweaks available for the picture’s gamma levels, overscanning (make sure this is set to zero for HD viewing), and clarity, the latter being based on altering the picture’s luma and chroma transmission. As you can see from this quite technical adjustment, BenQ has been surprisingly uncompromising in the thought it’s given to getting the best out of what is, after all, a very affordable projector.


It’s fair to say, then, that the onscreen menus give you plenty of set up flexibility. I was also appreciative, at set-up stage, of the projector’s vertical image shifting functionality. But there is one rather important limitation of the W5000 you should be aware of: its level of zoom is only 1.2x, meaning that the projector won’t adapt to a wide variety of room sizes especially well. As a result, we’d suggest that you measure the distance between your screen and preferred projector position and check the W5000 fits the bill with your nearest BenQ dealer before buying one.

In most ways, the W5000’s pictures are really rather marvellous. Take black levels, for instance. Even though on paper the W5000’s contrast ratio is only claimed to be 10,000:1 – considerably less than some of the figures bandied about with gay abandon by a few LCD models these days – the reality is that the W5000 delivers some of the very richest, deepest and above all most consistent black levels we’ve seen on any DLP projector – never mind one costing under £1,500.


Clearly the combination of the Advanced Continuous Electronic Iris and DynamicBlack processing know their onions. What’s particularly impressive is the way the near pitch blackness on show during the night-time scenes of ”Apocalypto” on Blu-ray looks completely stable at all times, with practically no trace of the brightness ‘jumps’ seen with most dynamic iris projectors – especially LCD models.

After the projector’s black levels, the W5000’s most outstanding achievement is its sharpness. It makes every single one of its 1,920 x 1,080 pixels count in reproducing 1080-line sources, delivering them with a level of detail and clarity that is nothing short of remarkable on a projector at this price.


What’s more, with overscanning turned off, these extreme detail levels are delivered with terrific purity, helping the picture enjoy a sense of three-dimensionality and scale that frankly I’d normally expect to find after parting with twice as much as cash. This quality really helps deliver the potent dual sense of claustrophobia and grandeur that characterises the jungle setting for our ”Apocalypto” test film.

It’s worth stating, too, that the picture’s immense sharpness works wonders with video games. The breathtaking – if shallow – beauty of ”Assassin’s Creed” on the Xbox 360 looks nothing short of stunning when fed through the W5000 onto my rather nice 140in screen. (Grins)


It’s clear from this extreme detailing and depth of field that the W5000’s lens quality is a considerable cut above what we’d normally find at this sort of price point – something which makes us considerably more tolerant of the lens array’s rather paltry optical zoom flexibility.

Yet more good news concerns the W5000’s colours, which manage to combine two of our favourite things: exceptional richness, and consistently natural tones. Few films provide a tougher test of a projector’s colour talents than ”Apocalypto”, with its tough combination of many dark scenes, numerous shades of green, and an endless parade of unclothed human skin. Yet the W5000 rises to all colour challenges with aplomb and a really dynamic sensibility, especially if you set the BrilliantColour mode to on.


And still we’re not done with the good stuff, as ”Apocalypto’s” frequent motion-packed sequences, such as the opening pursuit of a wild boar, are delivered with practically no trace of DLP’s ‘traditional’ dithering noise over horizontally moving objects. There’s a touch of motion blur, perhaps, but this is seldom distracting and is actually something I strangely found myself getting used to over time. 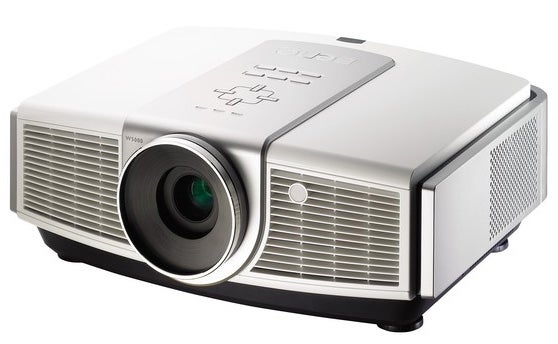 One final unexpected strength of the W5000 is its almost total freedom from affordable DLP’s traditional ‘rainbow effect’, whereby the machinations of the DLP colour wheel can cause stripes of red, blue and green to flit around in your peripheral vision, or over areas of extreme contrast.


In fact, only one aspect of the W5000’s images gives us any pause for thought: the amount of grain and dot crawl they sometimes betray. Some of the ”Apocalypto” footage can look slightly grainy at the best of times, but on the W5000 the dot crawl effect definitely seems exaggerated, particularly with the BrilliantColour system activated.


Curiously I spotted similar issues on BenQ’s much more expensive W20000 model, suggesting that there’s definitely something going on in either BenQ’s processing or optical design that would bear improvement.


The presence of the noise we’ve just described effectively means you have a choice to make regarding the W5000. If your image tastes are driven predominantly by sharpness, detail and vibrancy, then at £1,359.25 the W5000 is just about as big a no-brainer purchase as we’ve seen in a while.


If, however, you’d rather go for an image with a little less extreme sharpness and ‘aggression’ but which arguably looks slightly smoother and more movie like, than you might want to check out the similarly priced InFocus IN78.


The key point here, though, is that whether you end up with the Full HD BenQ W5000 or the HD Ready InFocus IN78, you’ll still have bagged yourself one of the biggest bargains the projector world currently has to offer.