If the W3000 is exceptional with 2D content, it’s outstanding with 3D for its money.

Look at the W3000’s 3D images before donning the active shutter glasses and you’ll be concerned by the startling amounts of red infused in its pictures. I’ve seen such redness before with BenQ 3D projectors and, unfortunately, have found that traces of it have remained – albeit in greatly reduced form – in dark scenes even after putting on the 3D glasses.

Happily, though, BenQ’s latest design of glasses eradicates the redness pretty much completely, leaving in its place colours that look every bit as natural but vivid as those I lapped up from the projector in 2D mode.

The level of detail is high, too, avoiding the drop off in 3D mode that is often seen with relatively affordable home entertainment display devices. The W3000’s 3D images look crisp and full of depth. 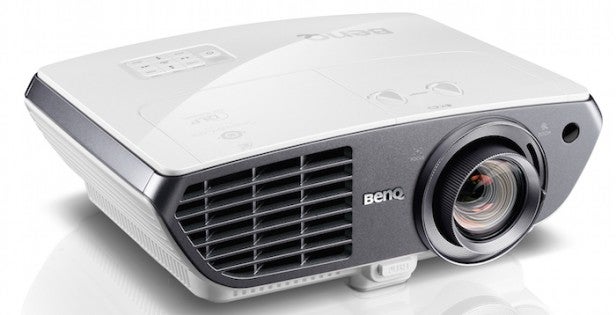 The projector’s contrast performance also holds up well in 3D, which means dark 3D scenes avoid the relatively flat look they can suffer on displays with less contrast.

There’s minimum judder and, perhaps best of all, the W3000’s images are almost completely free of crosstalk ghosting noise.

While in an ideal world the W3000’s 3D images would be a little brighter, overall they still serve as a stark reminder that if done well – especially on the sort of screen sizes a projector can deliver to – 3D really can be great fun.

There was a time when reviewing the sound quality of a projector – assuming it had speakers built in at all – was a pointless task; the majority sounded uniformly poor. Recently, though, this has started to change.

The W3000 plays its part in this shift by delivering a soundstage that offers more clarity, detail and distortion-free volume than you’d ever expect a projector to manage.

Inevitably, it isn’t perfect. Bass sounds pretty boxy, and the soundstage doesn’t project as far from the projector’s body as I’d like. If the projector is sat some distance from your screen, then you’ll likely be rather distracted by the dislocation between the image and the source of the sound. These sorts of issues are pretty much par for the course with integrated projector audio solutions, though.

A less typical issue noted with the W3000, though, is a tendency for its audio to appear slightly out of sync with lip movements in its images. I suspect this is related to the input lag issues (discussed below). If this is the case, the only way to get round it until BenQ finds a permanent fix is to run the audio through an AV receiver that lets you add delay to the audio stream.

So while the W3000’s picture quality is outstanding for its money, measurement of its input lag revealed a painfully high figure of more than 100ms. This is while using the W3000’s Game picture preset, and with the projector’s noise reduction and resolution-boosting processing turned off (they’re left on with the default Game setting).

This 100ms figure is at least four times higher than I’d like to see and, rather bafflingly, is more than three times the figure recorded on BenQ’s step-down W2000. It suggests that some part of the much higher level of picture processing inside the W3000 isn’t being disabled by the Game preset.

As it stands, this input lag figure potentially makes the projector a no-go zone for serious video-game fans. BenQ is investigating the issue and I’m hoping it might come up with a solution in the form of a firmware update; needless to say, I’ll update this review accordingly if a fix is found.

One other noteworthy aspect of the W3000’s performance is its low running noise. In the Eco lamp setting it isn’t possible to hear the cooling fans at all, but even in the Smart Eco and Normal lamp modes the noise remains subtle enough not to become a distraction.

If you’re a movie fan then you’ll struggle to find better picture quality in a projector that costs less than £1,500.

However, if you’re likely to be gaming on your projector as well as watching movies then the W3000’s problems with input lag mean you’d be better opting for BenQ’s W2000. Unless, of course, BenQ comes up with a solution to the issue, which is a possibility.

The W3000 is, for the most part, another great home-entertainment projector from BenQ. Aside from the input lag issues, for which BenQ will hopefully develop a fix soon, the W3000 presents class-leading performance for the price.