The W1350 sits on a footprint substantially smaller than the projector’s top surface, resulting in sides that angle out as they travel from bottom to top. The resulting attractive trapezoidal shape is given extra appeal by the W1350’s combination of a silver colour for the front and sides and a glossy white for the top cover. 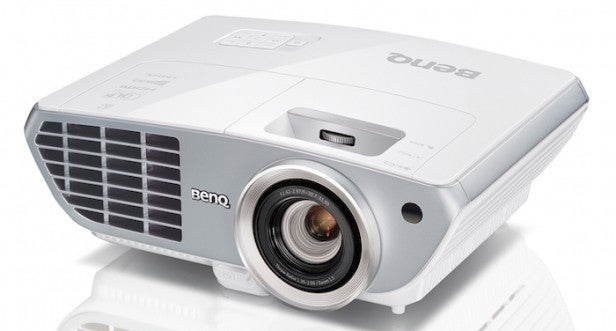 This top cover includes a recessed area containing zoom and focus rings, as well as a vertical shift wheel that lets you move the image up or down. This is a welcome discovery on such an affordable projector. The W1350 is also unusual for its price point in supporting horizontal keystone correction, whereby you can correct the shape of your image to account for circumstances where you might have to position the projector off to the side of your screen. Note, though, that unlike the vertical image shifting this horizontal adjustment is achieved via a digital distortion of the picture.

Connections on the projector’s rear side comprise: two HDMIs (with MHL support for easy mobile phone mirroring); a VGA PC port, a component video input; Type A and Type B USB inputs; a composite video input; a 12V trigger port for, say, firing up a motorised screen; an RS-232 port; and a stereo audio input.

Having audio inputs on a projector may seem a dumb idea given that any sound a projector makes will inevitably be substantially dislocated from the pictures being cast onto a distant screen. However, built-in speakers are now an almost universal feature on cheap, relatively ’casual’ projectors such as the W1350, in recognition of the fact that their users will often only be setting them up as and when they need them, in circumstances where finding an external audio solution may not always be easy.

The speakers in the W1350 do at least have the potential to sound a cut above the paper-thin efforts of most projectors, though, thanks to their 10W output and so-called ‘resonant chamber’ technology, designed to boost bass reproduction. 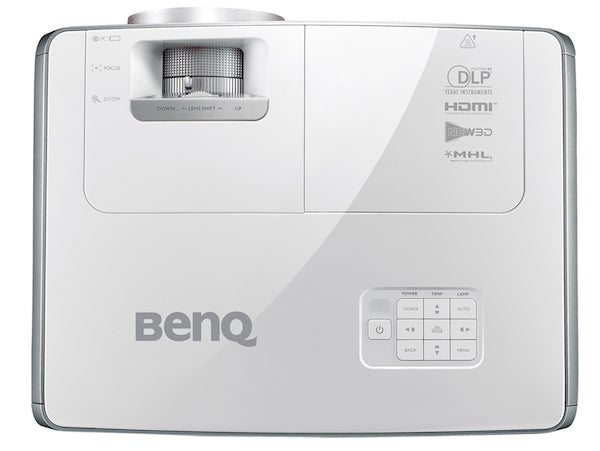 One final aspect of the W1350’s connectivity is the optional Wireless Full HD Kit. At £280 this represents a significant extra cost in the context of the projector’s lowly price, but the system works very well, delivering pixel-perfect full HD images – even 3D ones – wirelessly from source to projector using a compact and simple-to-set-up transmitter/receiver combination.

BenQ claims a wireless line-of-sight coverage range of up to 30 metres for the Wireless Kit, but its four built-in antennas mean it can transmit signals through cabinet doors – and potentially even walls – in return for a much more limited effective range.

Inevitably for a cheap DLP projector the W1350 is a single-chip model, using a colour wheel to produce its colours. This wheel is a 6X-speed RGBRGB design, which will hopefully keep a lid on the so-called ‘rainbow effect’ artefacts that can still be a problem for single-chip DLP systems.

The projector also enjoys one of Texas Instruments’ DarkChip 3 optical devices, which are notable for the way they hide physical pixel structure and deliver less jagged object edges.

The final big attraction of the W1350 is that as well as supporting 3D playback out of the box, without the need for an extra transmitter kit, it ships with a pair of free active 3D glasses. This is unusual for the sub-£1000 projector market.

The W1350 offers much more setup flexibility than most projectors in its price bracket. The vertical image shift and horizontal keystone correction we mentioned earlier mean you’ve got much more freedom over where you place your projector than usual.

There’s also a drop-down leg at the projector’s front if you really need the projector to sit substantially below the screen, and it’s worth adding for people with limited room space to play with that the W1350 features a shortish-throw lens able to provide a 100-inch image from a throw distance of three metres.

The lens also delivers a welcome 1.5x of optical zoom, while its onscreen menus are jam packed with image tweaks, including colour management for all six ‘primary’ colours, various gamma settings, and white balance calibration. It’s no surprise after exploring the W1350’s menus to find that it carries the endorsement of the Imaging Science Foundation (ISF) as a projector that could support a professional calibration.

If you’re looking for some quick guidance to a great picture, we’d suggest starting with the Cinema preset, turning off the noise reduction system (at least for HD viewing), turning off Brilliant Colour if your source is grainy (otherwise leave it on), and experimenting with toggling the lamp power setting between Economic and SmartEco.

Many films enjoy extra pop using the Smart Eco mode, though it can lead to some minor light instability and reduced shadow detailing with very dark films. It should also be said that the Smart Eco mode (and the Normal lamp setting you should only use when there’s ambient light in the room) causes substantially more noise from the W1350’s cooling fans.

Used as the main TV for the review period
Tested for more than a week
Tested using industry calibrated tools, discs and with real world use
Tested with broadcast content (HD/SD), video streams and demo discs
Next
Picture Quality, 3D, Sound and Verdict Review