Setting the W1080ST up is a mix of good and bad. The bad, chiefly, is the lack of any optical vertical image shift, meaning that many people – especially those using a proper screen rather than their wall – will have to use keystone correction to get the sides of their image looking straight. The problem with this is that it essentially requires the projector to digitally distort the image, losing the ‘pixel for pixel’ precision you would otherwise get.

On the upside, there’s a reasonable amount of optical zoom (though this only takes you from short-throw to even shorter-throw!), and the focus ring is precise enough to enable you to arrive fairly easily at an accurate setting. There’s a drop-down leg at the front and a wind-down leg at the back to aid image positioning, and the remote control, while small, does offer one-button access to many of the projector’s key features. It’s a pity the remote isn’t backlit, though. 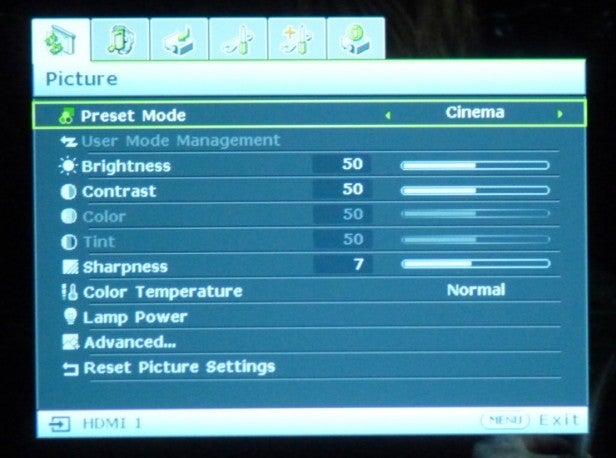 The on-screen menus are quite nicely presented, and contain a surprising number of relatively advanced adjustments. These include a colour management system; three lamp settings (Normal, Eco, and Smart Eco, the latter of which functions as a sort of dynamic contrast option); a reasonably sophisticated colour temperature adjustment; noise reduction; gamma adjustment; and an on/off toggle for DLP’s BrilliantColour processing for boosting colour saturations.

Aside from its short-throw lens, the W1080ST’s specs look pretty similar to those of the BenQ W1070 we tested not too long ago. So it’s not all that surprising to find the short-throw model performing every bit as well as its sibling.

Immediately, for instance, you’re struck by the sheer punch and dynamism of the projector’s image, which pops off the screen far more than you’d expect for so little money. This is partly down to that 2000 ANSI Lumens of potential brightness; for even though you’ll be running the lamp nowhere near that hard while watching films (we’d recommend the Eco or Smart Eco lamp settings rather than the brighter Normal setting), there’s still a striking amount of light making it onto the screen.

What’s really great about the W1080ST’s high brightness, though, is that it doesn’t stop the projector from producing a startlingly convincing black level response. Put these surprisingly natural and deep black levels together with the W1080ST’s brightness, and you’ve got that rarest of budget projector things: a strong contrast performance. 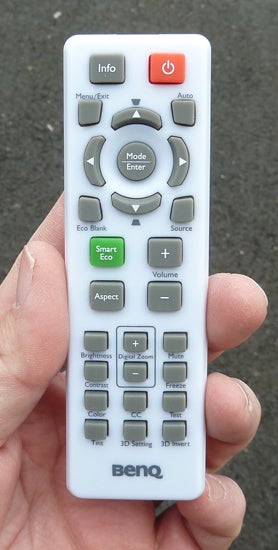 This is arguably the single most important thing to get right if you want to play movies convincingly, and in the W1080ST’s case the contrast arrangement is so convincing that it even manages to make the final Harry Potter film a pleasure to watch, despite that film containing some of the darkest scenes ever committed to Blu-ray.

The W1080ST’s ability to deliver both high brightness and good black level depth helps it produce another very pleasant surprise for a budget projector: lots of shadow detail. On most budget projectors subtle background detailing in dark scenes tends to get crushed out, but with the W1080ST dark scenes enjoy pretty much the same amount of background detail (and, therefore sense of depth) that bright ones do.

This sort of consistency between dark and light material is hugely important when it comes to keeping you immersed in what you’re watching.

One final point about the W1080ST’s handling of dark scenes is that we were very impressed by how little evidence there is – at least from an in any way sensible viewing distance – of the green speckling noise once common with budget DLP projectors.