The BenQ W1080ST+ is, you won’t be too surprised to learn, a new update to last year’s well-received original W1080ST. It’s a short-throw Full HD DLP projector designed for quick and easy set up whenever you want to use it, and its key upgrades over the original W1080ST are greater brightness and enhanced connectivity that includes compatibility with an optional wireless video system.

The BenQ W1080ST+ follows BenQ’s usual styling to a T – which is no bad thing, as the trademark combination of glossy white and silver colouring, neatly rounded sculpting and compact footprint looks very pleasant on your coffee table.

The top panel houses both a set of control buttons if you can’t find the remote control, as well as a window above the lens barrel providing access to simple zoom and focus adjustment wheels. 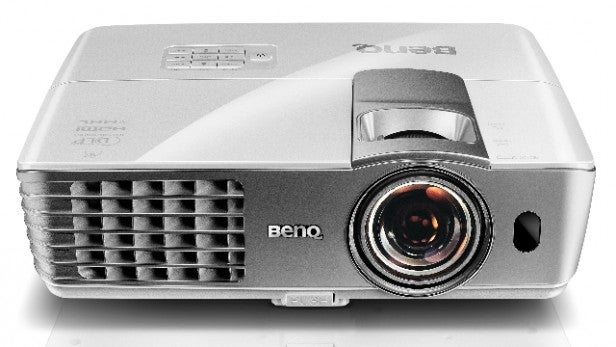 Connections are mounted on the rear, and comprise two HDMIs, a component video input, a VGA PC input, an RS-232 port, a 12V trigger, a USB service port, a composite video input, and a stereo audio in/out. These latter ports are there because, as with almost all cheap projectors these days, the W1080ST+ sports a built-in speaker. This claims a respectable 10W of power delivered in stereo from a resonant chamber design that claims to boost bass reproduction versus most integrated audio solutions. In other words, the W1080ST+ takes its audio duties a heck of a lot more seriously than most projectors do.

The W1080ST+’s connections introduce two significant differences between it and the original W1080ST. First, the HDMIs support the MHL connection protocol, making it easier to share videos and photos from your smartphones and tablet computers on your projection screen or wall. Second, as with the recently tested BenQ W1070, the W1080ST+ is compatible with a new BenQ Wireless Full HD Kit. This optional extra (£249) system lets you stream video from your sources to the projector wirelessly with, supposedly, no loss of quality. This is a very welcome idea given the often extreme cable runs required to connect sources to a projector – especially as the system can even pass its signals to different rooms.

The short-throw nature of the W1080ST+’s lens enables it to project a 100-inch image when just 1.5m from your wall or screen. This means it can be used in small or awkwardly shaped rooms, makes it easier for people and pets to avoid walking between the projector and the screen or wall, and saves you from the noise and heat discomfort associated with having to sit right next to a projector, as can happen with projectors with more ‘normal’ throw distances.

The W1080ST+ uses a native Full HD DarkChip 3 DLP system with a six-speed RGBRGB colour wheel, illuminated by a claimed 2200 Lumens of maximum brightness. This brightness is 200 Lumens up on the max output of the original W1080ST. Claimed contrast is the same, though, at 10,000:1 full on/full off, or a highly respectable 500:1 using the more ‘real world’ ANSI contrast measurement.

The W1080ST+’s menus don’t initially look like they’ve got many options to play with. But this is only because the projector uses two levels of menus: a basic one containing just a few simple options for day to day use or technophobes, and a more in-depth one so packed with options that the projector is endorsed by the Imaging Science Foundation (ISF) as a model flexible enough to support a professional installation by one of its engineers.

The advanced options include colour management, various gamma presets, colour temperature presets, a trio of lamp power modes (more on these in the Set Up section), Brilliant Colour processing (though sadly you can only turn this on or off, rather than having a selection of levels to choose from) and a small selection of picture presets that includes a reasonably thoughtful Cinema one.

Unlike the recently tested Optoma GT1080, the W1080ST+ offers a welcome bit – 1.2x – of optical zoom. It also provides both horizontal and vertical keystone adjustment, so that you can get the edges of the image straight regardless of whether you’ve got the projector sat above or below your screen or set off to the left or right of it. Good stuff for a projector available for under £800.

You can also tilt the projector up via a simple dropdown front leg, or tilt it down via screw-down rear legs, and both the zoom and focus rings are reasonably responsive, making it pretty easy to get them to deliver precisely the setting you’re after. It’s important to stress, though, that you aren’t provided with any optical image shift, leaving you having to use the keystone system to ‘distort’ your pictures into having straight sides unless you’re able to position the projector at exactly the right height and angle relative to where you want your images to appear.

When it comes to getting the most out of the W1080ST+’s picture settings, our main tips would be that you avoid the BrilliantColour option unless you’re watching with some ambient light in your room; that you use the Gamma 2.2 setting; that you use the Eco lamp mode – unless there’s light in the room – to stop the projector running too noisily (though the Smart Eco mode, which adjusts brightness according to content, delivers marginally the best picture results); and that you keep the noise-reduction feature turned off.