When most movie fans think of home cinema projectors, they think of rich folk lounging back in custom-built leather chairs in huge spare rooms that have been converted into personal cinemas. And with these thoughts in mind, your average movie fan glares balefully at the sorry state of their bank balance, glances around the small living room that likely makes up the only space where a projector might sensibly be installed, and shoves their projection dreams unceremoniously into the folder marked ‘lottery win’.

The last few months, however, have given the lie to this traditional notion of home cinema projection as a rich man’s dream, thanks to the arrival of an unprecedented number of budget projectors. And today we have another one: BenQ’s £799 W1080ST. However, the W1080ST doesn’t just rely on its price to catch your eye. For the ST part of its name stands for Short Throw, on account of the fact that its lens is designed to deliver huge pictures from a much smaller throw distance than your average projector. 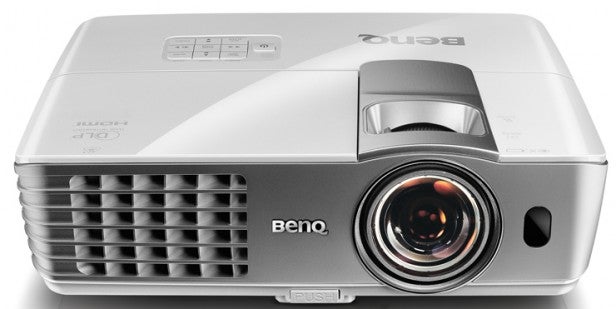 To give you some idea of the sort of throw ratios we’re talking about, the W1080ST can produce a 65-inch image with just 1m between it and your screen or wall.

As well as opening up the possibility of creating a home cinema environment in a very small room, being able to place the W1080ST so close to your screen potentially makes it easier to position the projector away from your seating position to reduce noise pollution. Plus it could come in handy for Nintendo Wii gaming sessions (if anyone still actually does those), as you can cavort about behind the projector, rather than standing between it and your screen.

Yet another potential benefit of the W1080ST’s short-throw configuration is that it might for once make the speakers built into the projector’s bodywork vaguely useful. For since the projector will almost certainly be sitting forward of your seating position, the sound the speakers produce can actually sound like it’s at least vaguely connected to the pictures you’re watching, rather than sounding hopelessly disconnected as happens with speaker-carrying projectors that have to sit further from your screen/wall.

The W1080ST’s short-throw system additionally makes it a potentially very practical business and educational model. That said, BenQ refers to its new baby as a home theatre projector – and this seems borne out by its specifications. Its 10,000:1 claimed contrast ratio, especially, is unusually high by sub-£1000 projector standards (though the recently tested £800 Optoma HD25 remarkably claimed twice as much).

Connections include two HDMIs, in addition to which the W1080ST also delivers 3D via the DLP Link system. It promises to do so very punchily too, thanks to a claimed brightness of 2000 ANSI Lumens. The only pity is that you don’t get any 3D glasses included for free with the projector.

Next
Set Up, 2D Picture Quality and Shadow Detail Review