Since writing our original review, we’ve been sent some of BenQ’s 3D glasses. So we can now assess this projector’s 3D performance.

In many ways it’s good. There’s practically no crosstalk ghosting noise, and pictures from 3D Blu-ray look remarkably detailed and sharp for such an affordable projector. There’s plenty of brightness and colour richness in the 3D pictures too, despite the dimming impact of the 3D glasses, and in a dark room we didn’t feel troubled at all by the sort of flickering that can occur with some active shutter 3D systems.

Motion is decently handled too. There’s a touch more judder than you get with 2D, but it’s not severe.

There is one significant problem, though: the appearance of a pretty startling amount of red colour in dark scenes. Instead of black, in other words, you see a strange kind of deep red that’s really very distracting.

So while with bright scenes the W1070 performs crazily well in 3D for its money, its handling of dark scenes is a let down.

The sound produced by a projector’s built-in speaker system is usually dire. Partly because the sound is coming from a position far away from the onscreen action, and partly because the speakers involved are usually pathetically underpowered. 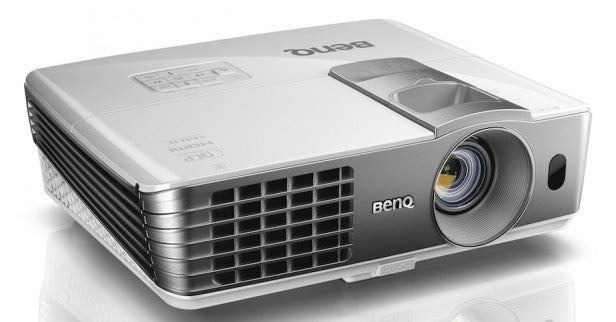 The W1070 ’s Resonant Chamber design, though, tries hard to break both these ‘rules’. It’s capable of going surprisingly loud without succumbing to distortions, and even better, since the projector employs quite a short-throw lens you can even position the projector so that the sound appears to be coming from somewhere in the vicinity of the onscreen action.

Add in surprisingly clear vocal reproduction and a really striking ability to throw the sound clear of the projector’s body and you’ve got the best sound we’ve heard from a projector. Sound that’s actually just about good enough, in fact, to save casual users from having to add an external sound system – which represents a genuine watershed moment by projector sound standards!

The remote control BenQ provides with the W1070 is excellent. Its layout is logical and helpful; it’s a decent size that fits comfortably in your hand; its buttons are exceptionally responsive, delivering a definite click when you press them down; and best of all it’s fitted with a bright red backlight that makes it a doddle to find the right buttons no matter how dark a room you’ve got your W1070 in. The remote with the original W1070 wasn’t nearly as helpful – especially as it didn’t feature a button backlight.

Input lag – the amount of time it takes a video device to render images after receiving image data at its inputs – is traditionally a problem for projectors. But the W1070 gives a solid account of itself, measuring just 34ms when using a cabled connection and a progressive rather than interlaced feed. Even better, now that we’ve been sent a wireless video kit subsequent to our original review, we’re happy to report that as well as delivering flawless pictures up to 1080p, this system appears to add no video lag at all to proceedings. Excellent.

While it might have been nice to see BenQ reworking the original W1070’s optical system a bit more comprehensively than it has when coming up with the W1070 , we guess BenQ only ever intended it to be an iterative step forward rather than a full generational leap; the clue’s in the name, after all. Also, while the picture quality step up from the W1070 to the W1070 may be small it’s still worthwhile, helping to give it an edge over arguably all of the similarly priced competition right now.

Spend more and you can unsurprisingly do better. We’re thinking in particular of the excellent £1100 Epson TW3200 with its extra set up flexibility and freedom from rainbow noise (though its contrast could be better), and the superb Sony VPL-HW40ES, which is currently available for around £1800. If £640 is as far as you can stretch, though, the W1070 is tough to beat.

It’s not exactly a projector revolution, but the W1070 does improve in performance and, especially, feature terms on what was already one of the budget projector world’s best performers.

Next, read our pick of the Best Projectors