Having looked at one fully-adjustable business-oriented monitor, the Samsung BX2240, only last week, fortune has transported another into our labs: the BenQ V2410T. Like the BX2240 it sports a 1,920 x 1,080 (Full HD) resolution, is LED-backlit, has a fully adjustable stand and is intended for business users. Its only obvious difference is the size, as it ups the inch-count to 24. How does it compare? 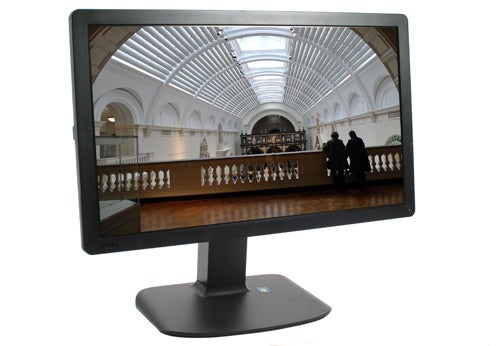 First off, setup is easier than most monitors (effortless, in fact) as the monitor arrives completely pre-assembled. It’s no lightweight though, so unlike with the BX2240 you’ll definitely need two hands to move it about. Predictably, this extra weight does translate into far better build quality. The lightly-textured matt black plastic finish that adorns this display from head to toe feels very rugged, and there’s not a hint of the unwanted flex, creak or flimsiness that the Samsung occasionally exhibited.


As noted just now, the V2410T offers the same flexibility as the BX2240, meaning it supports height, tilt, pivot and swivel. However, its range of height adjustment is much more impressive, lifting the screen from 7cm to a full 20cm off your desk! We can’t recall the last monitor to manage quite that much. Adjustments are perfectly smooth and easy to make, and overall this is probably our favourite implementation of a fully adjustable stand. Admittedly the stand’s base is unusually large, and at 30cm across takes up quite a bit of desk. However, thanks to its flat shape you can easily put things on it, so it doesn’t waste space.

Connectivity consists of DVI and VGA, which while niggardly by consumer display standards is certainly adequate for a business-oriented model. Though connectors are down-facing, hooking up cables is easy as pie with the V2410T in portrait (pivot) mode. Our only complaint is that, as ever, BenQ only includes a VGA cable – one of the few manufacturers to still stick to this archaic provision.

The V2410T features very thin 2cm sides which match the thinner LED-backlit displays out there. It bulks up towards the centre, but one of the reasons for this is that it integrates its power supply rather than housing it in a separate brick like most rivals, allowing you to use a standard ‘kettle’ power lead – a preferable approach in our book.


With its svelte 2cm sides and consistently thin 2cm bezel (unlike most budget TN displays where the lower part of the bezel is thicker), this business display makes a symmetrical, elegant impression. The only blemish is a small bulge on the left edge only visible from the side, which we assume houses a headphone socket on a different implementation (probably consumer-oriented and sporting HDMI) using this same chassis. 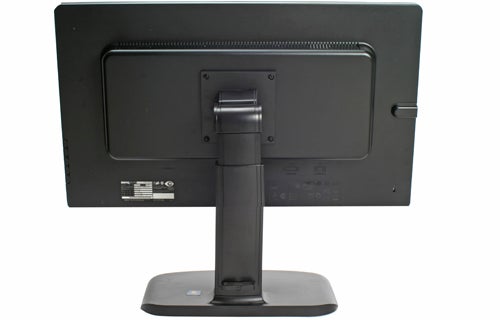 Consequently, this monitor’s look is quite attractive. While a glossy finish may look better in the shop, after a few months of use the inevitable accumulation of fingerprints, dust and perhaps even scratches will lessen the love. The V2410T won’t suffer from this, and BenQ has left the bezel free of any intrusive white/grey branding or logos.


The only things to spoil its clean lines are a suitably unobtrusive round power button (with an unusual central green LED that can’t be turned off but is dim enough that this shouldn’t matter) and the icons denoting the functions of the V2410T’s five control buttons. These buttons actually reside on the screen’s right side and are demarked by sharp little Braille-like bumps, making them easy to distinguish in the dark where the labels become invisible. All the buttons feel solid and offer positive feedback. 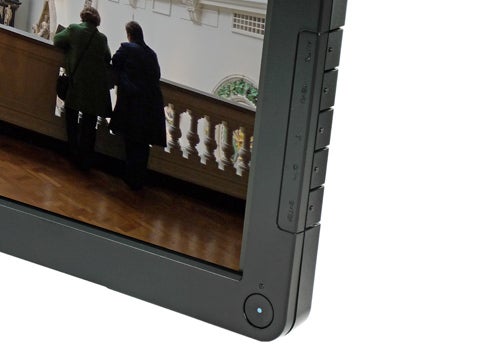 As ever, BenQ’s OSD is colourful, attractive and really easy to use, with everything under logical headings. All the important settings can be altered, including Gamma, Sharpness, Colour Temperature, Hue and Saturation. In addition there is a range of customisable colour presets making the colour calibration of this display quite flexible.


There are also a set of usage presets including Game and Movie. Though we’d recommend you avoid them on their default settings, they are the only ones that allow the V2410T’s adjustable dynamic contrast to be activated. Unlike most monitors, not only can you set dynamic contrast to four different intensity levels, but BenQ’s old familiar Senseye divides the screen into two halves to let you see its effects and the result of other settings you might tweak too. This is one of the handiest features on any monitor, especially for casual calibration.

So far we’re very impressed with the V2410T, but how will it fare with the all-important criterion of image quality? First let’s get the negatives of this TN panel-based monitor out of the way. Though horizontal viewing angles are decent, vertical ones suffer the same inconsistency as the Samsung BX2240, meaning that there’s only a very narrow angle where you don’t suffer from severe contrast shift. Backlighting was also slightly uneven, with minor light bleed from the bottom bezel, though both of these were only noticeable in a dark environment. Last there was quite noticeable banding across all colour scales. 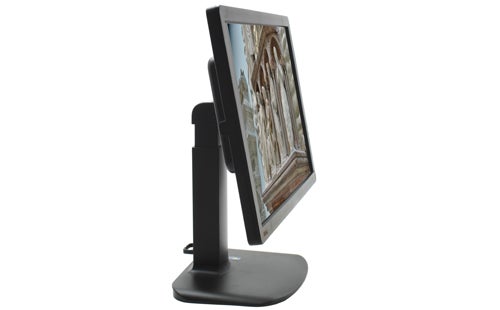 Getting onto the positives, after calibration colours come across as natural and sharpness is excellent, with none of the washed-out look that we saw on some other budget LED-backlit displays. Greyscale performance is also quite good: as long as you manage to avoid the aforementioned contrast shift you’ll get impressive levels of dark detailing, albeit (inevitably) at the cost of white purity. Still, it’s a nice balance for films and games, and far more likely to affect real-world usage than the banding problem mentioned above. Of course the V2410T’s Full HD (1,920 x 1,080) resolution means it’s ideal for high definition entertainment, but it offers aspect controls for older material.


One of the hallmarks of LED-backlit monitors is frugality, and the V2410T doesn’t disappoint. Even the most intensive usage never brought its power consumption above 18W in normal mode, while switching to Eco mode reduced this to a mere 16W – impressively in line with the 22in BX2240!


In terms of value the £185 BenQ also scores a major win. Again comparing to the Samsung BX2240, this monitor offers two more inches of screen real estate, better build quality and smoother adjustments, including a very generous height allowance – all for less money. 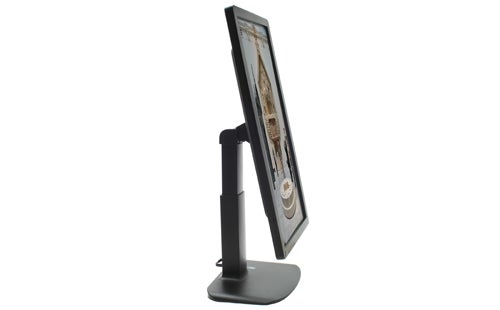 If you want better image quality, Samsung’s own 23in, Full HD F2380 (the bigger brother of the F2030 we reviewed a while back) is still your best bet. It offers similar adjustability and build quality, a second digital input, and, most importantly, its PVA panel will give you viewing angles and image quality on a whole other level. However, for office use the V2410T’s image faults are negligible, so if your budget is tight and you want to save on your electricity bills into the bargain, this BenQ is probably one of the best business monitors around. Gamers who aren’t too fussy about image quality will also like its dark detail performance.


Considering its image-quality foibles are negligible for daily productivity, the BenQ V2410T puts in a star performance for a business-oriented display. Offering rugged build quality, low power usage, a slim profile and full adjustability to match the best of the rest, its relatively low price is just icing on the cake.