When flat-panel LCD monitors first came out they were much thicker than they are now; indeed, compared to the average modern TFT screen they were positively bulky. In time, though, they’ve become thinner and thinner and BenQ has led this charge with the likes of the BenQ V2400W. Back in 2008 it was the thinnest around, but its 60mm thick chassis pales in comparison to the BenQ V2220 we’re looking at today, which thanks to its use of LED backlighting measures a mere 15mm. 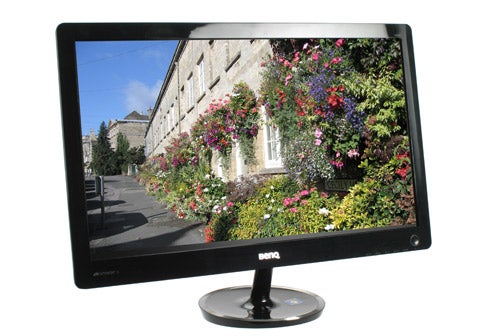 Like the BenQ G2222HDL we reviewed recently, it’s a 21.5in display and has a Full HD (1,920 x 1,080) supporting native resolution. Unlike its more dowdy, cheap and cheerful counterpart, though, it offers a little style and (on paper) better specifications. We say “on paper” because of the V2220’s second claim to fame: the world’s highest dynamic contrast ratio (for a desktop monitor) of a frankly ludicrous 10,000,000:1. Yes, in case you lost count of the zeros or thought it was a typo, that’s ten million. This is partly down to the use of LED backlighting, but also some extremely liberal marketing – in reality the native contrast ratio is a thoroughly unmarketable 1,000:1.


Another benefit of LED lighting is power efficiency, but though BenQ posits the V2220 as environmentally friendly it doesn’t get any medals for “best” or “most” in this third category due to its 25W maximum power use. It’s still quite frugal compared to many larger, more expensive monitors, but even the minimum 15W draw achieved using the Eco mode can’t match those marketed specifically as ‘eco’ models. If this is a big concern for you there is an eco version of the V2220, though its design is a little different. 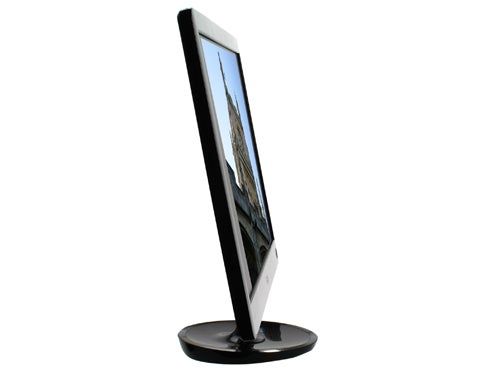 Unsurprisingly, from the moment you take it out of its box the slimness is the most eye-catching feature about the V2220. An extremely narrow, rounded and angled stand helps accentuate the svelte impression further. It’s also very light when compared to most monitors. In some respects it looks very similar to the likes of the Samsung EcoFit SyncMaster P2370. It assembles in a similar manner too, with the chassis and leg simply clicking into the weighty base to be secured with a neat hinged thumb-screw.


According to the literature the monitor’s piano black exterior is “inspired by the finish on lacquer ware” – and here we were thinking it was inspired by every other piece of glossy plastic product around. Shiny bezel haters will be tearing at their hair, but the finish does help to bring out the V2220’s clean lines. Overall, it’s an attractive piece of design.

At the rear the monitor curves outward slightly, which adds around 2mm of depth to the 13mm thick edges. Aside from the modestly sized area for the connections, the rear is completely unembellished. Those connections point straight out, which does ruin the clean look a little once cables are connected, but on the other hand makes it child’s play to hook them up in the first place. Our monitor comes with just DVI and VGA inputs, but an HDMI equipped version (the V2220H) will be available and include a headphone socket as well. Unfortunately, BenQ still doesn’t include a digital cable with its monitors, and at this point we despair that it ever will until analogue is finally retired. 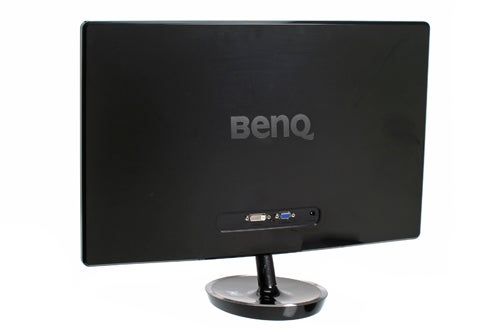 One disadvantage that we mentioned about BenQ’s previous slimmest, the V2400W, was that it didn’t feel too sturdy and the chassis creaked when applying pressure. Thankfully this has been remedied with the V2220. Though it still wobbles on its thin stand, its plastics feel very solid and there’s no hint of creak anywhere. The sturdy base with its thick rubber pads and attractive chromed ring feels especially impressive.


Moving back to the monitor’s front, the bezel is left fairly clean, with only a subtle green LED ring surrounding the power button in the bottom right corner. Beside it, small icons mark out the controls. Hidden below the bezel’s bottom edge, these are thankfully physical buttons rather than the irritating touch buttons we so often see, though the ‘menu’ one is too stiff for comfort.

As usual BenQ’s colourful OSD is fairly logical, with a few minor exceptions like aspect ratio controls being found under the ambiguous ‘Display Mode’ – not that you should need them often as this Full HD (1,920 x 1,080) display sports the ideal resolution for modern consoles and many other external devices. One feature that’s nice to see is that Dynamic Contrast is available on most presets, and can be set from zero to five – an improvement over most monitors which merely offer on/off. 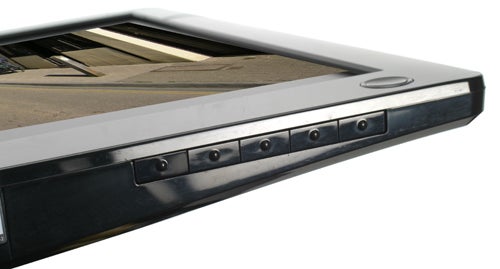 Unfortunately the presets are truly terrible, with Standard and Eco modes lending everything a distinctly yellow cast, while Game and Movie give some of the least accurate colour palettes we’ve come across in a while. Photo mode is the best of the bunch, but still has brightness turned up to its eye-searing maximum. In fact, despite being adjustable, none of the presets manage to present a picture we were happy with. Regrettably, as we elaborate in our image quality testing on the next page, the V2220’s problems extend further than some dodgy presets.

Good news first: undoubtedly thanks to its LED backlighting, the monitor displays no sign whatsoever of backlight bleed. Even horizontal viewing angles are decent for an LCD display based TN panel technology. Inaccurate as colours might be, they do ‘pop’ from the screen, and black really is black rather than very dark grey as on some displays. Last but not least, provided you use the correct setting (adjustable between one and five) sharpness is good too.

Now for the bad news: no amount of effort made colours very accurate and there was unusually strong banding across colour scales; vertical viewing angles are as bad as ever; and contrast is pathetically poor, giving the lie to BenQ’s ludicrous 10,000,000:1 contrast claim. As with many budget TN-based monitors the V2220 simply couldn’t display either the darkest or lightest ends of the greyscale, a weakness betrayed by the lack of fine detail in films and games.


Clearly, then, this isn’t a monitor for anyone looking for reasonable image quality as well as svelte, stylish design. Ultimately it really comes down to whether you’re willing to put up with its deficiencies to enjoy its benefits. As this monitor is perfectly adequate for daily use, office work and light entertainment, it’s great for those who don’t demand more and are looking for a stylish monitor that won’t add noticeably to the electricity bill. If you care less for aesthetics, however, the BenQ G2222HDL is £30 cheaper and offers superior image quality too. 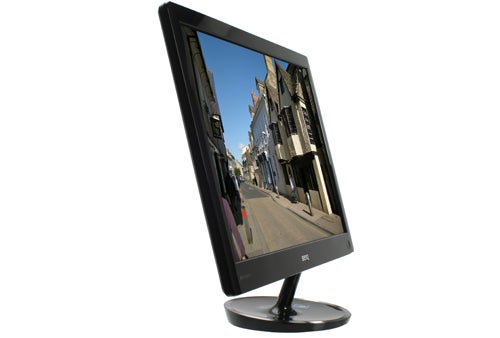 Speaking of bargains, the Samsung SyncMaster F2080 has come down in price considerably since our review, and is now available for £146! You might get a lower 1,600 x 900 resolution, but this is more than made up for by its vastly superior connectivity, build quality and ergonomics, not to mention image quality that’s in a different class due to the excellent cPVA panel.


Slim, stylish and frugal, the BenQ V2220 is let down sub-par image quality. If an ultra-slim monitor is what you’re after it’ll do the job, but it sacrifices too much to maintain broad appeal.