If you’re in the market for a compact and eye-catchingly affordable home entertainment projector, the BenQ TH530 could be just what you need.

Despite costing just £530, it produces pictures bright enough to watch in a little ambient light but rich enough in contrast to support serious dark-room use, and it’s equally at home with games and movies. You just need to be careful if you’re prone to noticing rainbow effects.

Not surprisingly for a projector that costs £530, the TH530 is fairly flimsily built. It’s strikingly small at 283 x 95 x 222mm and the body is clad entirely in plastic, with various venting points down its sides to let both fan noise and stray light pour out. There’s even a bright circle of light leakage from directly around the lens. The TH530 is saved from all-out ugliness by a fetching gloss-white finish and daintily curved edges that give it at least a vaguely domestic feel.

The TH530’s remote control isn’t one of BenQ’s best. It’s small, crowded with tiny and poorly labelled buttons, and doesn’t have any backlighting. All of this means it’s pretty much unusable – assuming you can even find it – in the sort of dark rooms most projectors are designed to work in.

As you’d expect of a budget projector, the TH530 isn’t overburdened with physical setup aids. There’s no vertical image shifting, for starters, and the amount of optical zoom on offer is so tiny that BenQ might as well not have bothered with it.

The throw ratio is sensibly pitched to suit a position on a coffee table in a typically sized room, though. Certainly it didn’t present me with any placement issues in my eternally cluttered test room. 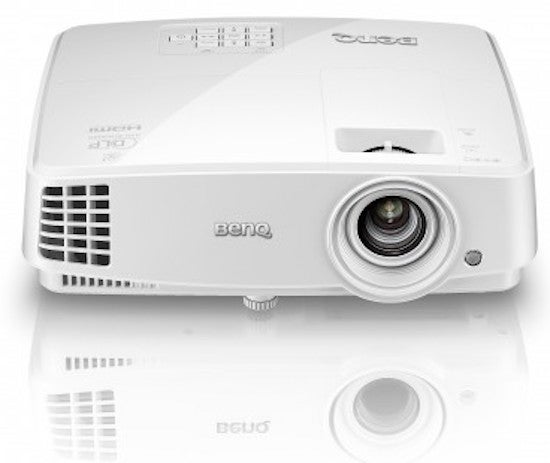 The TH530 delivers a solid set of picture adjustments for its price point, although there are only a couple of options I’d recommend tweaking beyond choosing the Cinema picture preset. Firstly, use the SmartEco lamp mode, as this delivers the most effective all-round contrast. Secondly, set BrilliantColour on to boost shadow detailing, and then set the colour temperature to Warm.

The TH530’s single-chip DLP system delivers some pretty big on-paper numbers for a £530 projector. It enjoys a Full HD pixel count of 1,920 x 1,080. It also claims a maximum brightness of 3,200 ANSI lumens and a contrast ratio of 10,000:1 – a promising combination that helps allay suspicions that the TH530 might just be a business projector masquerading as a movie-watching and gaming device.

Connections are adequate rather than great. The main reason I say this is that there’s only one HDMI input where I like to see two these days, even on budget models such as this. There is an audio loop-through system to support a built-in 2W speaker, though, as well as two D-Sub computer ports. There are also S-Video and composite video options, but these low-quality connections are always best ignored where possible.

The TH530 provides some basic colour-management features, despite its exceptional cheapness, and provides an unusually varied selection of lamp modes. Particularly noteworthy among these is the SmartEco setting that cleverly boosts contrast while also reducing the lamp’s power consumption by as much as 70%. There’s also a LampSave mode that dynamically adjusts light output based on content and extends the lamp’s lifespan to a huge 10,000 hours.

Finally the TH530 supports 3D, although I wasn’t provided with any glasses I could have used to test this feature.