BenQ-Siemens has not been around all that long as a handset manufacturer, but the company has quite a range of phones under its belt and its flagship at the moment is the EF81, a slimline, flip, tri-band GSM with 3G affair.


The EF81 is exclusively available through Phones4U as I write, but should be offered by operators before very long.


Inside and out the colour scheme is a mix of two shades of silver and black. A large proportion of the outer fascia is given over to brushed steel and the number pad on the inside is also made of this. Adonised aluminium forms the back of the casing, while the front display is protected by hardened glass. The overall impression is of materials that should handle the knocks a modern phone expects to encounter. 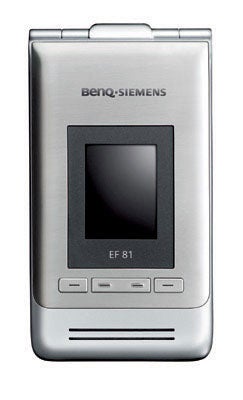 Design-wise the EF81 is a little blocky for my taste, but the flip format means it is small for the pocket at 94mm tall, 51mm wide and 15.9mm deep. It also weighs an acceptable 110g. If you are immediately thinking of it as a possible rival to Motorola’s V3x then a quick specs comparison in this department reveals that this is a smaller and lighter handset: the V3x’s dimensions are 99mm x 53mm x 20mm and 130g.


The outer display measures 1.3in diagonal and unusually offers a plentiful 262,000 colours in its 120 x 160 pixels. Compared to some others it is stunning. Beneath it are three buttons – a long rocker and two shorter buttons. Between them they allow you to use the camera for shooting stills and video, play music and take voice calls in handsfree mode. The rightmost of them allows you to lock and unlock all the front buttons. The loudspeaker is disguised in two long horizontal grilles towards the bottom of the front fascia.

There are no side buttons to clutter things up – the flexible front buttons mean there is no need for them. There is only a single slot, on the bottom right edge which is shared by mains power adaptor, headset and PC connectivity cable.


The clam opens into two positions. In a near 180 degree position you can hold it to your ear. Before it reaches full stretch it locks in at around 120 degrees. Lay the base of the phone flat on a table and this is the ideal position for making hands free video calls.

You do, though, need to think a bit carefully about where you put the handset to do this. On a desk in front of you is fine, but the camera angle just doesn’t work properly if you want the handset raised a little from your desk height. For example my PC monitor is at eye height and it was not possible for me to sit the EF81 next to it to make a video call without wedging the whole handset at a new angle.


Inside the clam there is a lot of space for screen and keyboard. Although the screen is of a reasonable size at 2.2in diagonal it does look a little lost in the large area available to it, even though BenQ-Siemens has done its best to enhance the screen with a big, black frame. At 240 x 320 pixels and offering 262,000 colours, though, it is sharp and bright.

The number pad and other keys use almost all the available space on the bottom section of the clam. Another Motorola V3x comparison has to be made here as the area is flat with small raised lines forming three sides of a rectangle to separate the number keys from each other and eight further raised lines radiating from the large central navigation lozenge to separate the other function keys – two softmenu keys, call, end, video call, Internet, clear, and a task switcher for flicking through open applications.


The only one of these which is a fiddle to use is the navigation key which has a relatively small area to tap at. But it is slightly raised, which makes the job a little easier. 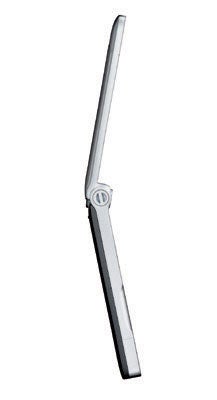 BenQ-Siemens gets away with a single camera for video calling and stills shooting by locating it on the hinge so that it swivels when you open and close the clam. With the clam closed the camera faces the back of the handset, with the clam opened it swivels to the front.


Using a single camera may have helped achieve the slim design of the EF81, but it is a bit hampering when it comes to shooting stills and video because you can’t swivel the lens manually. With the clam opened you can only shoot stills and video of yourself. With it closed you can shoot away from yourself but have to use the front screen to frame shots and its relatively small size makes things far more difficult than they would be using the internal screen.

Also, videos and stills shot using the front screen are forced into landscape mode. You can zoom and change brightness using the front screen, but can’t change any other settings from it. Not that there are many more settings available. There is a self timer but no sepia or other filters, and few settings for different lighting conditions – just auto, indoor and outdoor.


The camera shoots stills at up to 1.2megapixels. It lacks a flash for indoor use, colours are not as vivid as they could be and I had trouble producing shots that were not blurred. It is below the quality I would expect from a high-end handset like this.


Video calls, on the other hand, were fine in quality. The music player too, didn’t disappoint with good quality playback through the handset’s loudspeaker and to the provided headset. It is annoying that BenQ-Siemens doesn’t support a 3.5mm headset connector, and that the handset’s memory is limited to 64MB. You can expand on this using microSD cards but they live under the battery so they can’t be hot swapped.

If you are after a phone that can share contact and diary information with your PC this handset comes with what you need in the box – software that will share this information with Outlook and a cable. You can also make a Bluetooth connection if you prefer. Document readers cope with PDF, Microsoft Word and Excel files and the mobiPocket reader is installed for ebook reading. Business users can even use the EF81 to control a Bluetooth device via Microsoft Bluetooth Remote Control.


On the fun side Star Wars fans will like the suite of goodies that includes a game, video screen themes and sounds. Several other games are also included. Bizarrely, there is also a cocktail database among the extras, complete with pictures of the drinks.


BenQ-Siemens suggests you should get around 3.5 hours of 3G life from the battery and 4.5 hours of GSM life. I did a fair bit of video calling and Web access on the move as well as making voice calls and a little music listening while testing this handset. It coped OK, but I certainly wouldn’t want to carry this as my main mobile and be away from a mains power socket in the evening.


BenQ-Siemens’ EF81 could be an alternative for anyone considering buying Motorola’s RAZR V3x. But you shouldn’t expect a great deal from the camera when shooting stills.