The BenQ’s game-friendly design gave way to underwhelming image quality benchmarks. The first problem came from the black level of 0.65 nits, which is high – the brightness level of 327 nits is great, but it means the contrast is a low 503:1.

That wasn’t the only immediate issue. The colour temperature of 7,533K is cool, and the average and maximum Delta E levels of 6.75 and 11.86 are far too high.

Those first benchmark results create several problems. The high black level means that darker areas aren’t as deep as they could be, and the poor contrast means shades aren’t easy to distinguish – a double-edged sword in games, as dingy spots will be illuminated but they’ll lack nuance. The colour temperature means that the entire colour gamut lacks vibrancy. 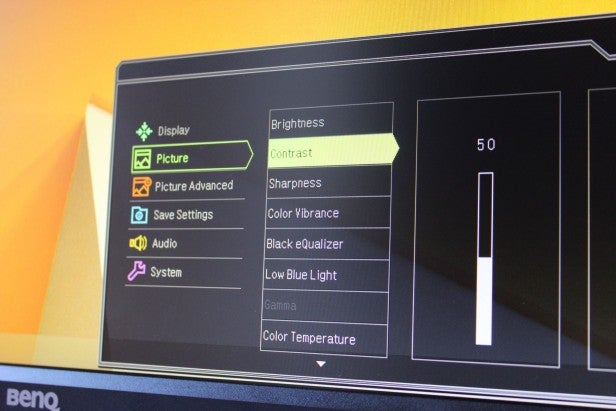 Toning the brightness down didn’t improve matters. With the screen locked at 150 nits the contrast declined to a poor 484:1, while colour temperature and Delta E remained middling at 7,439K and 2.77. Turning on Dynamic Contrast didn’t help, either – in fact, it made all of these figures worse.

Those underwhelming benchmarks helped the Acer XB270H pull ahead. Its colour temperature and Delta E results are both better than the BenQ, and the Acer’s contrast ratio of 994:1 is far higher. Games will look deeper, brighter and more vivid on the BenQ’s biggest rival.

Little impresses about the BenQ’s viewing angles, either. Move up or down and the panel seems brighter but more insipid, and shifting from side-to-side sees the brightness dip. And in a darkened room with the screen at a high brightness level you’ll notice the backlight bleeding through, especially along the bottom edge.

Calibration only involved turning the green tones down three notches in the custom colour area of the OSD, and that tweak didn’t make much of a difference in benchmarks – most of the figures only improved marginally.

The BenQ was able to display 80.9% of the sRGB gamut coverage. Like so much else on this screen, that’s a mediocre result, with particular weakness visible when displaying red, pink and purple shades and some minor issues with light blue and green tones.

The most important screen modes concern gaming, but few of them add much to the experience. There are two modes designed for playing real-time strategy titles, but they don’t help. Both ramp the colour temperature up to uncomfortably cool levels, with other attributes hovering around the machine’s disappointing factory settings.

The fighting mode drops the brightness and delivers a decent contrast level of 988:1, but that’s its only triumph, as the colours are still too cool and inaccurate.

The final genre-specific mode, the FPS option, is selected by default, so that’s what we’ve used to get our factory settings measurements.

The media modes are no better. The Movie and Photo options both have cool colour temperatures, poor Delta Es that hamper their reasonable contrast levels. The poorest here, the Photo mode, ramped the colour temperature way up, to 8,479K. 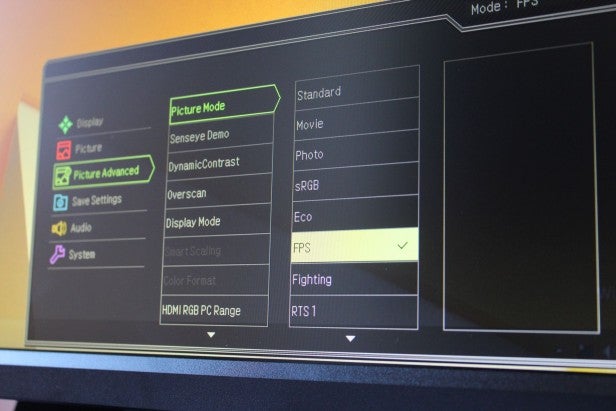 The colour vibrancy merely make colours too cool or over-saturated, with poor contrast in every test, and black equalizer boosts jumped ramped up the black level to uncomfortable levels. That might be good for illuminating dark corners in games, but it ruins the depth and nuance of darker tones.

There’s an Eco mode to cut power consumption by turning brightness down, but this screen never consumed much electricity. At factory settings and maximum brightness it needed a modest 30W, and with Eco mode activated that figure dropped to 23W. We were able to reduce the consumption even further by dropping the brightness to 125 nits. That’s still enough for most rooms, and it lowered the electricity requirement to just 17W.

The BenQ’s poor and inconsistent performance continued in our uniformity test. The colour temperature and Delta E didn’t deviate much, but the backlight caused issues. Along the bottom edge the BenQ’s backlight lost 9% of its power, which is a middling result, but then 13% vanished in the middle of the screen on the right-hand side – and, after that, the screen lost 20% of its brightness in the top-right corner.

That’s poor, and it means you may notice the variations in backlight strength in certain dark or light games The Acer lost between 10% and 12% of its brightness, which isn’t a great result – but it’s still better than the BenQ.

Input lag is better, although we do expect that from a TN panel designed for gaming. We used our Leo Bodnar testing device to measure at the top, middle and bottom of the screen, and measured an average of 10ms. That’s an excellent result that’s plenty good enough for high-level gaming – and far better than the Acer, which could only manage a sluggish score of 26.3ms.

BenQ has loaded this panel with gaming features, but there’s limited appeal to headphone hooks and specific genre modes when the image quality just isn’t up to par.

The BenQ’s contrast, black levels and colour accuracy just can’t compete with the Acer, and its game-specific modes don’t improve the situation. There are only two real areas where the BenQ beats the Acer: input lag and price.

The more affordable BenQ is an acceptable budget option if you want a large, quick-response gaming monitor, but saving for the Acer will be worth considering for most gamers – it’s got more features and better image quality.

The BenQ has a decent set of promising game-friendly features, and there’s no denying the value on offer – £200 for a 27-inch Full HD monitor is a decent deal. Image quality isn’t up to muster, though, with mediocre results in most departments. Acer’s rival panel is a bit more expensive, but it’s worth saving up to buy the XB270H instead.