Gaming monitors are often expensive, but BenQ’s RL2755HM costs £200. For that money you get a 27in screen with a 1080p resolution, as well as several features usually found on pricier panels.

It’s got special modes for different game genres, options to brighten up darker areas, and even a hook to hang headphones.

Most aspects of this panel’s specification are geared towards games. The underlying hardware uses TN technology, which is designed to serve up rapid response times and low prices, but TN screens can also suffer with poorer viewing angles and colours. It’s the same type of tech as the Acer XB270H, although that screen upped the ante with Nvidia G-Sync.

The 27in screen and 1,920 x 1,080 native resolution mean images aren’t particularly sharp, but that’s not always a bad thing – the modest resolution means you don’t need high-end hardware to get games running smoothly. The same could be said for the 60Hz refresh rate – it’s not groundbreaking, but it means that this panel meshes well with modest PCs, as well as consoles. 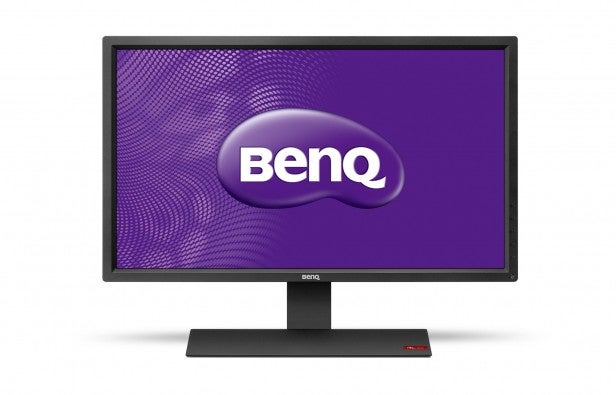 It’s the same resolution and size as the Acer, but other consumer panels are going beyond those figures – many 27in screens now have 2,560 x 1,440 resolutions as standard.

Several other features are designed for gamers. On the rear panel is an unfolding hook to hold headphones, and the stand has a small plastic loop to help keep cables tidy. There are speakers, and BenQ even claims the base is designed to grip controllers – although in practice that just means there’s a small plastic ridge to hang pads over.

The 1080p resolution means there’s no need for DisplayPort. Instead, connectivity extends to two HDMI ports and single DVI-D and D-SUB connectors, which BenQ says it a better fit for households with multiple consoles. The DVI-D and D-SUB connectors seem archaic, but at least it means the BenQ will be compatible with a wide range of older hardware.

The rear has a headphone jack and audio connector, but that’s it – there are no USB ports, which looks poor compared to the quartet of connectors on the Acer. All of the connectors face downwards on the rear of the panel; it would be easier if they faced away from the screen, or were installed on the side.

There are image modes specific to different game genres, a Black Equalizer that’s designed to brighten up darker areas to improve visibility in games, and twenty different settings for colour vibrancy. Low blue light mode and flicker-free modes are also included and designed to reduce eye-strain.

The speakers disappoint. The sounds are deep, but every part of the range is muffled and lacks clarity – even the bass, which should stand out, sounds indistinct. Everything is deep, dark and dingy, with no nuance at any point. We’d rather use headphones or a cheap desktop set. 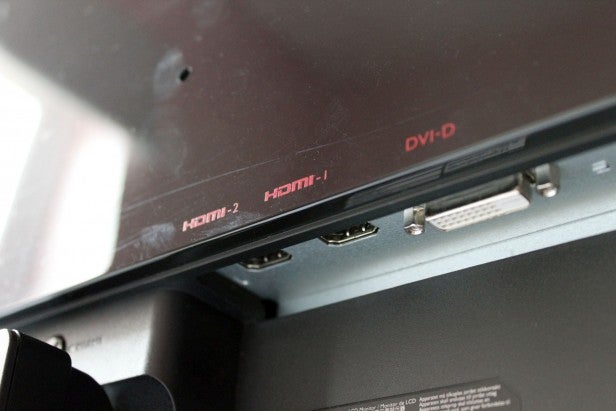 This machine is set up like most other BenQ panels – the stand clips into the rear of the screen unit without the need for any screws, and the base attaches to the bottom of the stand with a single pre-installed screw.

The BenQ is 213mm deep from front to back, which makes it much narrower than the Acer – handy if you’re short on desk space. There’s little to choose between the two panels in weight; the BenQ’s 5.5kg frame is less than 200g heavier than the Acer.

This screen falls behind in other departments, though. The BenQ’s panel can be tilted backwards and forwards, but that’s it for movement options; the Acer has portrait mode, height adjustment and left-to-right swivelling. The BenQ’s build quality is only mediocre; little impresses about the black plastic used throughout, and the screen is wobbly on the stand.

The BenQ’s menu is controlled by a row of physical buttons. They’re not snazzy or innovative, but they’re solid and satisfying to press. It’s a shame, then, that the on-screen menu doesn’t live up to those buttons – many of the larger menus are slow to react, and you can’t cycle round them, so you end up scrolling up and down.

The OSD occasionally didn’t respond to button presses, and screen modes take an awkward second to click into action. Every option you need is here, but we’d avoid diving into the menu as often as possible.