This is a monitor with a USP. The 21.5in BenQ RL2240H has been designed in co-ordination with a professional South Korean Starcraft 2 team known as Startale. We’ve heard of specialist FPS monitors that focus on getting the fastest response time possible, but what on earth can an RTS gamer demand from a monitor when they have the next 50 gaming commands stacked-up already?

As a TN monitor, the RL2240H predictably has a nice and fast quoted response time of 2ms (grey-to-grey), but that’s not what makes this a strategy gaming-focused monitor. It’s the array of scaling options and dedicated RTS mode that win it those real time strategy cred points. 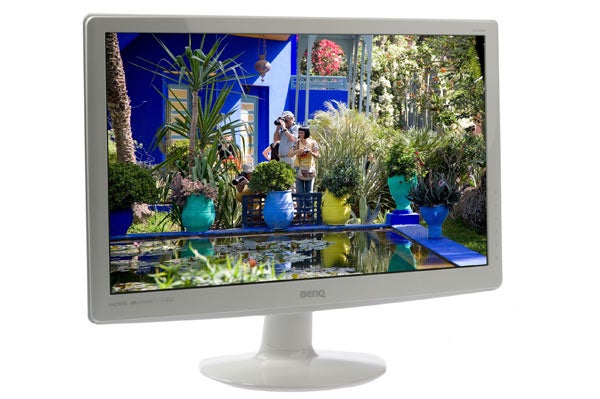 We’ll cover what these do later, because the first thing that struck us about the BenQ R L2240H is how little it looks like a “pro gaming” monitor. It’s smooth and glossy white, an unusual choice where we would have expected something black, and either simple or over-the-top gaudy, in Alienware style. This is an anomaly BenQ’s publicity pictures seem to support. Look below – yes, the Startale chaps may be using the RL2240H, but it doesn’t look anything like their monitors, visible in the background, does it?

The monitor is also very light, with no extra stabilising weight in the base, should you get a bit excited during a skirmish and give it a knock. Its featherweight nature will make it easier to take around to friends’ houses and such, but in these days of connected gaming, we imagine most buyers will do their playing at home rather in a room full of humming PSUs. 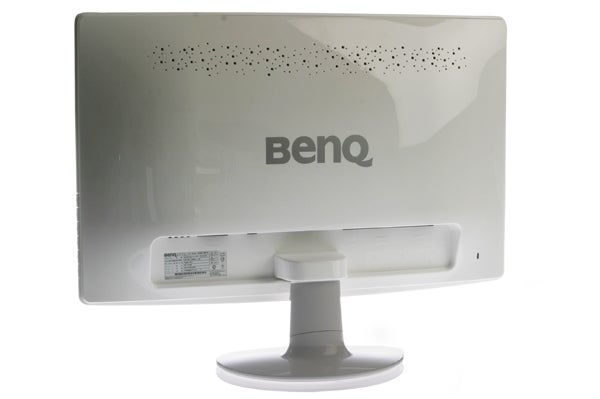 Connectivity is decent for an entry-level model. It has DVI, HDMI and VGA inputs, where some models still lack HDMI or DVI at this price – only a few, mind.

There is no built-in speaker, although as performance offered by speakers of LCD monitors is so poor, it’s not something we mourn. More of an issue is that you can’t configure the RL2240H’s orientation much. There’s about 25 degrees of up-down tilt available, but no height adjustment and no horizontal swivel room severely limit the flexibility of the monitor.

The BenQ RL2240H doesn’t make a great first impression. It feels unsubstantial, a bit cheap, and we’d imagine many gamers would be happier with the more stylish looks of something like the Samsung B2230N than the glossy white here – which will stand out like a pin-stripe suited business man at a LAN party next to most people’s computers.

The BenQ RL2240H’s menu system is accessed using the selection of buttons on the monitor’s right edge. It gives you access to a well-stocked pantry of image customisation settings, including the standards of contrast, brightness and sharpness.

Even after several bouts of fiddling, we couldn’t get the colours to stop looking washed-out. This sort of slightly lifeless image quality is common in TN panel monitors, but you can get this sort of performance in a 21.5in monitor for less than £90. At full 1080p native resolution, the image is sharp, but try and add any more clarity with the Sharpness dial and you’ll only add noise. 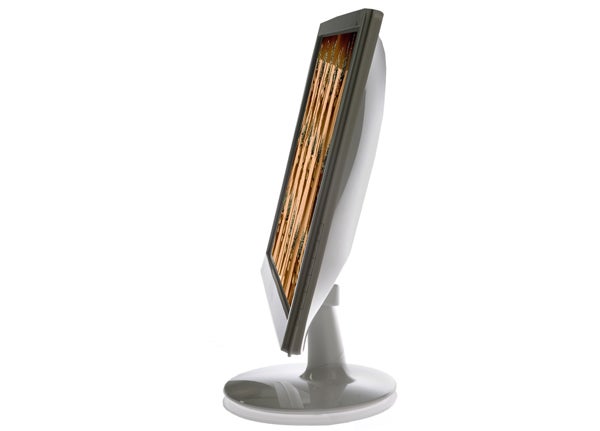 The LED backlight is very bright, but the stated 1000:1 contrast ratio is perhaps a bit optimistic. Contrast is unremarkable, and the monitor doesn’t provide a hugely vivid image. However, part of the monitor’s mission statement is actually to reduce contrast. The Black eQualizer tries to expose detail in shadow areas without blowing out whites, which will always tend to reduce the black level. Contrast throughout is unremarkable, and blacks aren’t hugely deep. 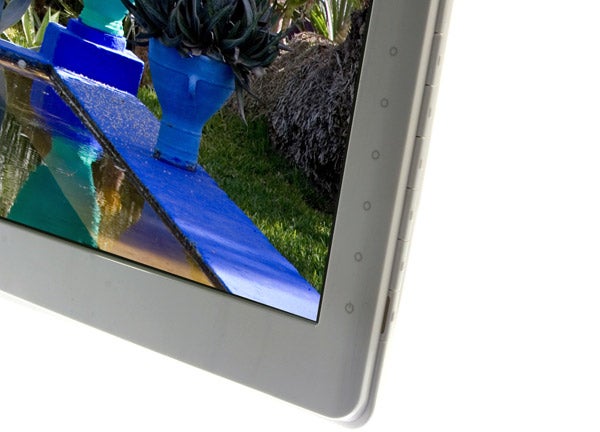 Taking a closer look at the quality of the panel, the backlight did not appear particularly consistent either. Backlight bleed isn’t too bad and differentiation in backlight luminescence is minor, but the backlight certainly doesn’t have the consistent, smooth performance we look for in a monitor. However, this isn’t something you will notice particularly in normal operation. Horizontal viewing angles are good, but there’s the usual contrast shift associated with TN panels when viewed from an off-centre vertical angle.

The “RTS” credibility of the BenQ RL2240H is limited to two main features, the RTS mode and auto-scaling options. The RTS mode is a simple image preset, comprised of contrast, brightness and colour settings. As such, it’s nothing particularly special but is one of the best of the bunch – a slight bias towards colour warmth giving images a pleasant look. Any link to real-time strategy gaming seems pretty tenuous here, though. 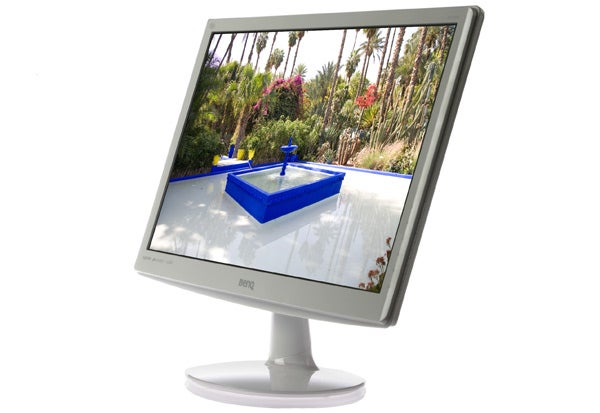 The auto-scaling modes let you switch from a full-screen view to cut-down 17in, 19in and 19in widescreen views. Like the RTS mode, we can’t think of many times when any of these would be desirable options while playing modern RTS games, but they could at least help to reduce the effect of blowing-up pixels you’ll see when playing an ancient game like the original Starcraft – which was designed to run at 800×600 pixels. As it leaves a great big black border around the edge of the screen, though, we imagine even in these limited retro situations, most people would live with a slightly blurred look to avoid the dreaded black bars. Disagree? Drop us a line in the comments.

Claiming that a monitor is designed specifically for real time strategy games is inherently problematic, because – unlike first-person shooters – there’s no particular spec demanded by the genre. Speed just isn’t quite as much of a deal here as with FPS games, so it feels as though BenQ is clutching at a reason for the RL2240H to have a place on shelves. And it hasn’t quite managed to grasp one solid enough. 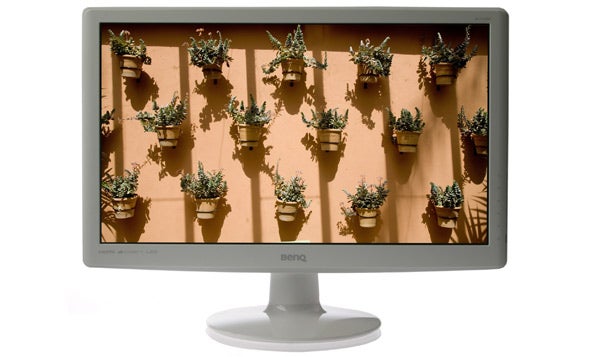 As with most TN monitors, the response rate is perfectly fast. The quoted 2ms figure is grey-to-grey, but nevertheless it’s fast enough to play shooters on. However, there’s nothing special about this monitor, and when there are better performers available at the same price as well as cheaper alternatives out there, we just don’t care enough that a pro Starcraft 2 team has given it a thumbs-up.

A monitor made for RTS games is an odd idea, and one that got us thinking. Our time with the BenQ RL2240H hasn’t resulted in any satisfying conclusion about quite how this is better for gaming than most other budget panels. Colours appear washed-out and the RTS mode is a pretty simple picture preset. When we doubt whether the all-white design will seem at-one with many people’s gaming rigs, we’re not convinced.