No matter how good or huge a TV gets (and as the 103in Panasonic TH-103PF9 proved, TVs get pretty big), they still can’t match projectors for giving that immersive, cinema experience. Better still, unlike a real cinema, you don’t have screaming kids or mumbling wanna-be-film-critics in your own living room – or at the very least it’s much easier to remove them. However, the downside is that to get a projector as good as even a reasonable HDTV, you generally have to spend a significant amount of money. 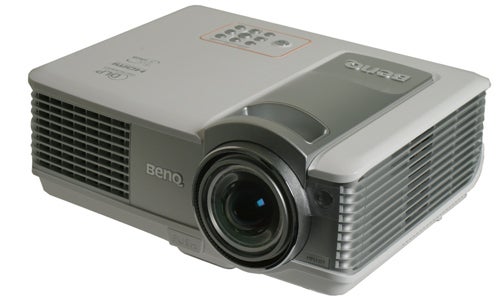 Even such devices as the sub-£1000 Full HD InFocus X10 still aren’t what you could call cheap; ludicrously good value for money, maybe, but cheap, no. However, not everyone is looking for a high definition setup, not having (or even wanting) an HD source to feed to it.


That isn’t to say, however, that these consumers don’t want the big screen experience. BenQ, the savvy company it is, knows that this audience is pretty large and is targeting it with the MP512 ST projector. Even just going by sales of the Wii, there are some four million (says VGChartz) owners out there, not to mention the countless Sky (SD) subscribers, Freeview watchers and… you get the idea. The point is, there’s a big market for a standard definition projector offering above average performance at a better than average price.


The ST in the product name stands for short throw – this is important because it means the MP512 can sit on a coffee table, a relatively short distance from the surface it is projecting on. In my own living room, I had the projector maybe 1.5m away from the wall, and still had a 60in image – Wii Sports has never looked so good.

As already pointed out, the MP512 is only a standard definition projector, with an 800 x 600 resolution to be precise. Despite that, it still goes so far as to sport an HDMI port, which will even accept a 1080p signal – which the projector then downscales. When inputting a 16:9 signal, there are obviously going to be black bars at the top and bottom of the screen, but the projector is bright enough, at a quoted 2,200 ANSI lumens, for that not to be an issue. Yes these bars are noticeable, but not distractingly so.


As well as HDMI, there is a VGA connector, for hooking up a PC or laptop (with the maximum input resolution accepted being 1,280 x 1,024, downscaled), an S-Video input, a composite port and a 3.5mm jack for audio input. That latter input should be avoided like the plague and investing in a pair of dedicated speakers, even something as cheap as the GigaWorks T20s should be a top priority for anyone thinking of buying the MP512 – or any projector for that matter. Even BenQ seems to agree, because neither the remote, nor the projector’s top-mounted controls offer a volume function.

Setting up the MP512 ST is an uncomplicated affair, so plus points all round on that front. A small point worth noting is that if you want to use a Wii in widescreen mode over composite, you’ll need to force the projector into a 16:9 aspect ratio. Otherwise you’ll have a squashed 4:3 image on your wall or screen which is hardly ideal. Another interesting observation was that when connected via HDMI, the PS3’s image didn’t quite stretch out to fill the entire projected width, but instead had a few pixels gap either side. Those small quirks aside, everything works as you’d expect it to.


On the image quality front, the MP512 ST does as well as can be expected from a standard definition projector. The DLP chip used is supplied by Texas Instruments and produces image quality which is, given the £399 (ex VAT) MSRP, really rather good. Wii Sports really does work well on a large screen. Even playing PS3 games sans-HD is an immersive experience. Black levels aren’t the best and the claimed 2,500:1 contrast ratio is perhaps a bit of an overstatement, but for the money, I’ve seen a lot, lot worse. 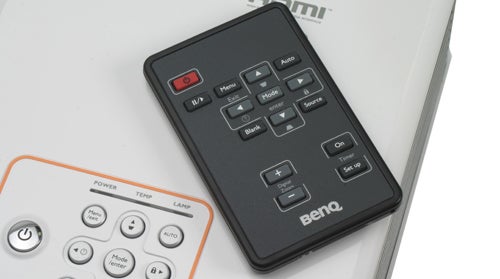 With BenQ pushing this projector very much towards Wii users (and even planning to bundle a Wii-specific cable with the first bunch sold) the lack of really good black levels isn’t that problematic. The colourful landscapes of games such as Super Paper Mario (my personal favourite Wii game) and Super Mario Galaxy don’t suffer from a lack of decent black levels anyway. I can’t help but think, also, than anyone who isn’t interested in making the jump to HD by now, probably isn’t the pickiest of viewers anyway, and likely won’t even notice that space is slightly grey.


Even a relative cinemaphile like myself is willing to accept the trade-off of absolute image quality considering the sheer size of the picture. Playing Warhawk, for example, on the PS3 I at first found myself wincing very slightly at the quality, but after some 20 minutes, I had forgotten all that and was instead able to sit back, soak up the atmosphere and focus on the important business of playing the game – all 60-odd diagonal inches of it! Forget what they say, size really is everything; at least when it comes to gaming. 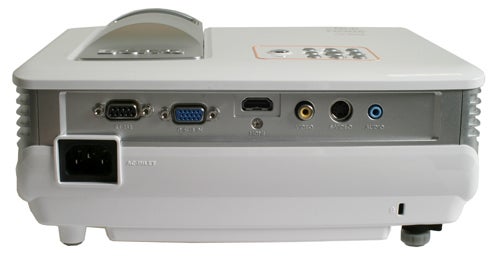 Switching to a couple of films, the black levels, or lack thereof, became more noticeable. One scene in the fantastic (but surprisingly little-known) The Air I Breath, outside a night club at, oddly enough, night, shows considerable detail loss in the dark background. Serenity, too, suffered considerably, which is understandable for a film set primarily in space. Occasional panning shots exhibited a touch of fringing, too.


The biggest problem is the projector’s 4:3 aspect ratio which leads to very large (s)black(/s) grey bars above and below the projected image. In a dark enough room, you can even see a very slight corona-like ark above the screen. It’s almost so faint as to be invisible, but having never seen such an effect before with a projector, it seemed a bit odd.


BenQ expects, and we agree, that the street prices for the MP512 ST will be a reasonable bit lower than the MSRP. If retailers can hit the £400 mark, then I think the BenQ is a pretty compelling deal. I’d love to say “pay twice as much, get an InFocus X10 and it’ll be twice as good”, but many simply can’t afford to pay twice as much.


If you’re not quite ready to make the jump to HD, but still want an immersive, big screen experience, BenQ’s MP512 ST is a perfectly capable solution. While there are a few small faults that could do with ironing out, the overall package is more than compelling enough to make up for those. Cliché as it sounds saying it, the MP512 ST really does prove that bigger is better.