A few years ago, Apple made white the new black in technology. One area where this colour can be difficult to find is in the mid-range 24in monitor sector. Well, fear no longer, you can now get an affordable and fully featured white and silver Full HD display to go with that Asus Eee Box or new Mac Mini, courtesy of BenQ’s M2400HD. 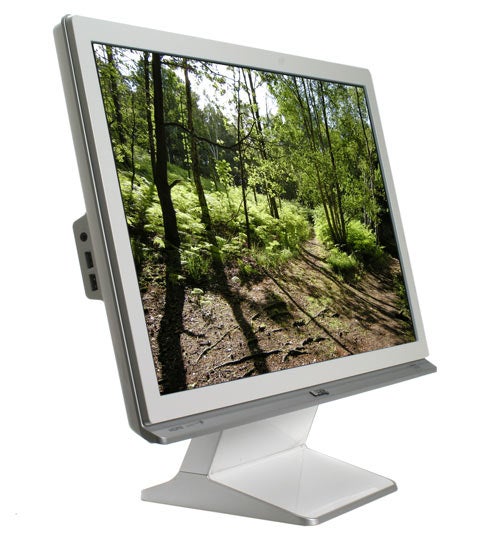 The last 24in display from BenQ we reviewed, the V2400W, managed to snag a recommended award thanks to its eye-catching styling and decent image quality. This new model might not look as stunning, but it’s by no means unattractive, and you do get more for less money – aside from the panel, which is a 16:9 (1,920 x 1,080) affair. This is the ideal aspect ratio for high definition video and console content though.

The M2400HD comes in two separate parts, the screen with stand and its heavy, metal-enforced base. The two click together smoothly and are also far easier to dismantle unlike many other monitors. Unfortunately, as with most budget TN monitors, there isn’t much manoeuvrability on offer, apart from a generous 25 degrees of easily adjustable tilt. When adjusting the screen you are also reminded of the M2400HD’s slightly sub-par build quality. For instance, there is more creaking than I’d like when moving the screen and the silver surround running along the bottom seems like it might snap off if it hits something. 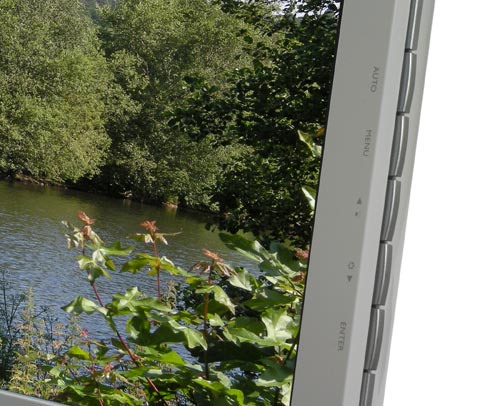 Regardless of feel, however, the M2400HD definitely doesn’t look like a cheap display. The screen features a slim (2.5cm) and uncluttered glossy white bezel with a silver surround that’s broad at the bottom. Inside this is nestled the power button with a large green LED. While not unattractive, I would liked to have seen a more subtly integrated touch button instead. Physical buttons also make up the menu controls and are nicely integrated into the aforementioned surround with their functions clearly marked on the front of the bezel.

The M2400HD is not a very deep monitor and doesn’t generate much heat even after hours of use. The back is all-white with a textured surface and comes complete with VESA-compliant mounting holes. Whether you’d want to use these to attach a VESA wall-mount or arm is questionable as the stand’s neck isn’t detachable, but they can come in handy when mounting, for instance, Asus’ Eee Box or indeed something like the small secondary 7in display on the unique Samsung-SyncMaster 2263DX combo. 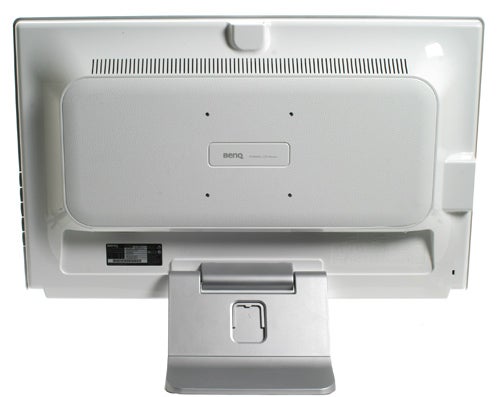 The display’s connections are as awkward to reach as on most monitors of this type, but cable routing is fairly well-handled by a removable hinged clip. Connectivity is certainly better than one might expect for the price: not only do you get the triple whammy of VGA, DVI and HDMI, but there is also a USB input and 3.5mm audio-in jack. A headphone socket at the side provides audio out from both this and HDMI, essential as the M2400HD’s integrated speakers are even more dire than one might expect; fit for only standard PC beeps and warnings and the occasional YouTube video.

Below the headphone socket on the left are two USB 2.0 ports, with a further one at the top specially shaped to handle yet another unexpected feature considering the M2400HD’s wallet-friendly nature: a separate 2.0-megapixel webcam with integrated microphone. This camera is styled to match the monitor, with a similar glossy white finish and silver surround. Even its stand, which terminates in a USB plug, is similar to the monitor’s, only allowing tilt adjustment. Still, that’s already far more than an integrated model would offer, and perhaps the biggest perk is that you can use this camera with any PC or laptop.

In terms of image quality, the webcam is certainly acceptable, with clean, sharp images unless there is fast motion. It also handles dark areas and colour gradients better than most bundled cameras. BenQ includes ArcSoft WebCam Companion 2 and Magic-I Visual Effects, which together provide a fun, easy to use and powerful enough software package. 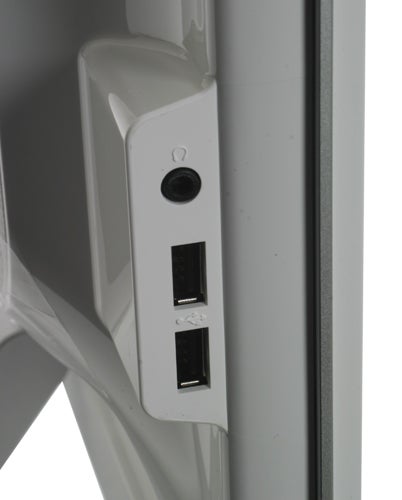 With all these nice touches, it’s a pity BenQ does not include a digital video cable, a policy I really hope the company will change sometime soon. At least you do get everything else, with VGA, USB and audio cables, a plain little quick-start guide, and multilingual manual on CD.

As always with BenQ, the M2400HD’s menus are big, colourful and fairly logically laid out. However, the navigation buttons work in the exact opposite way one would expect, making adjustments somewhat awkward. Menu buttons provide quick access to volume, inputs and presets, emphasising this screen’s multimedia leanings.


Most of the presets are frankly questionable. There is a choice between Standard, sRGB, Photo, Dynamics and Movie. In anything but Standard or sRGB, colours become garish and there is a strong blue cast, which can’t be corrected. It’s a shame this is the case as Dynamic Contrast can only be activated in those remaining three presets, although the panel does have a healthy 1,000:1 native quoted contrast ratio. In sRGB mode, you get reasonably accurate colours for everyday use and a very gentle brightness, while in Standard with Colour set to User Mode, everything including sharpness is customisable.

After adjusting these settings, the M2400HD produced pleasing image quality. Colours are bright without being oversaturated, and though it couldn’t quite cope with the extreme ends of the greyscale simultaneously, this TN still managed to produce a lot of dark detail while sacrificing a little white purity.

Viewing angles are also above average for a TN, and as with ever more monitors these days, backlight bleed is almost non-existent except for the slightest hint at the centre bottom. Nor is there any banding to be seen, and text is always sharp and legible.


Despite already featuring a 16:9 panel ideally suited to most non-PC uses, BenQ still offers a range of aspect ratio adjustments under Display Mode, including Overscan, Full and Aspect, which stretches any input image to its maximum without distortion. No 1:1 pixel mapping here, but I’m guessing most users won’t miss it. All these factors combine to make the M2400HD a very capable entertainment display for the price, especially since it displays less dithering and noise during films than many TN displays. 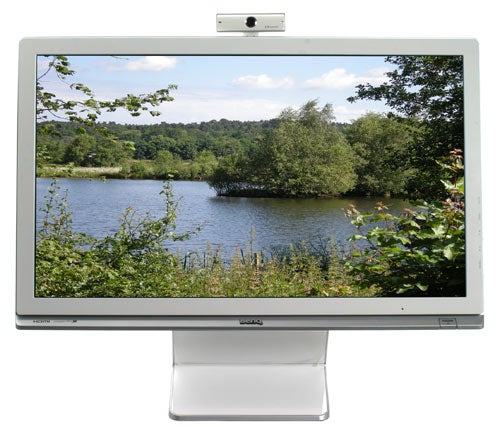 So when all is said and done, is BenQ’s 24in monitor worth paying £263 for? If screen size is your prime consideration, then you can get the 28in Hanns-G HG281DJ or Iiyama’s 26in E2607WS for around the same price. But neither of these can match the image quality or extra features you get with the M2400HD.


If you’re looking for an affordable and fully-featured 24in TN display offering decent image quality, BenQ’s M2400HD is a good deal. Throw in the webcam, integrated USB hub and unusual white/silver finish, and this monitor is certainly worth considering, especially if black’s not your colour.