A product made up of compromises and trade-offs, the BenQ GV1 is a neat, battery-powered portable projector that some will love but many will find hard to justify. It has built-in streaming apps but the interface is horrible; the projector can show a large screen, but run it on battery power and brightness drops; and, the built-in speaker is weedy and you need an external Bluetooth model. If you regularly travel and can put up with these flaws the GV1 might be for you but there are better options otherwise.

If you’re after a mini projector you can take everywhere, the BenQ GV1 is about as small as you can get. A little larger than a Bluetooth speaker, the GV1 manages to squeeze a battery- and Android-powered projector into a small box that’s easy to carry around.

A limited number of inputs, poor screen monitoring and a frustrating version of Android, combined with the high price take the shine off a little, though.

Unbox the BenQ GV1 and the first thing that you’ll think about this small device (155 x 80 x 80mm, 708g) is that this a Bluetooth speaker. With the mesh grille wrapped around the body, and smoothed corners, it looks very much like an audio device. And, in many ways, it is, with a dedicated Bluetooth speaker mode letting you use this as a Bluetooth speaker only.

However, a closer look shows that there’s a hinge on the head, which lets you tilt the top up and down to point the projector where you want. On top, there are some basic controls to turn on the projector, adjust the volume and switch between projector and Bluetooth speaker modes. 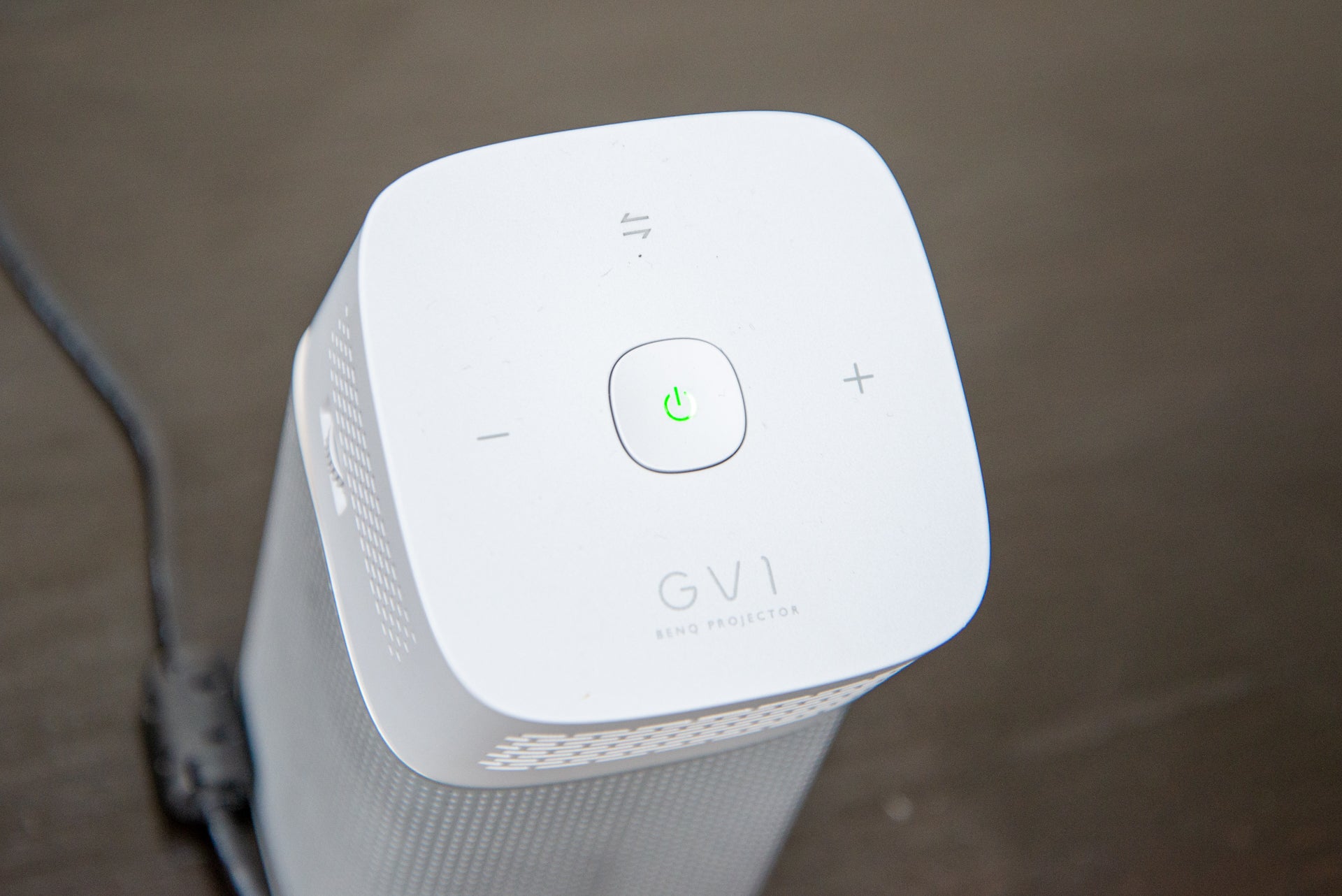 Around the back are the ports. There’s a single power input that lets you run the projector off mains power, while charging the internal battery. The battery is set to last for three hours, although it limits your brightness drastically; use the projector on mains power and brightness jumps to the maximum brightness of 200 lumens. Internally, there’s an 854 x 480 DLP projector, although the system is capable of taking anything up to a Full HD input.

Next to the power input is the solitary USB-C input. This can be used directly with a laptop that supports USB-C video out. The sample I had didn’t come with an HDMI-to-USB-C adaptor, although more recent versions are supposed to. This addition at least makes the projector a bit easier to use with other devices. You can mirror both an iPhone and Android device directly to the projector. This lets you send what’s on your phone’s screen, but it’s quite limited. Try and play Netflix, for example, and you get sound only, not the picture. 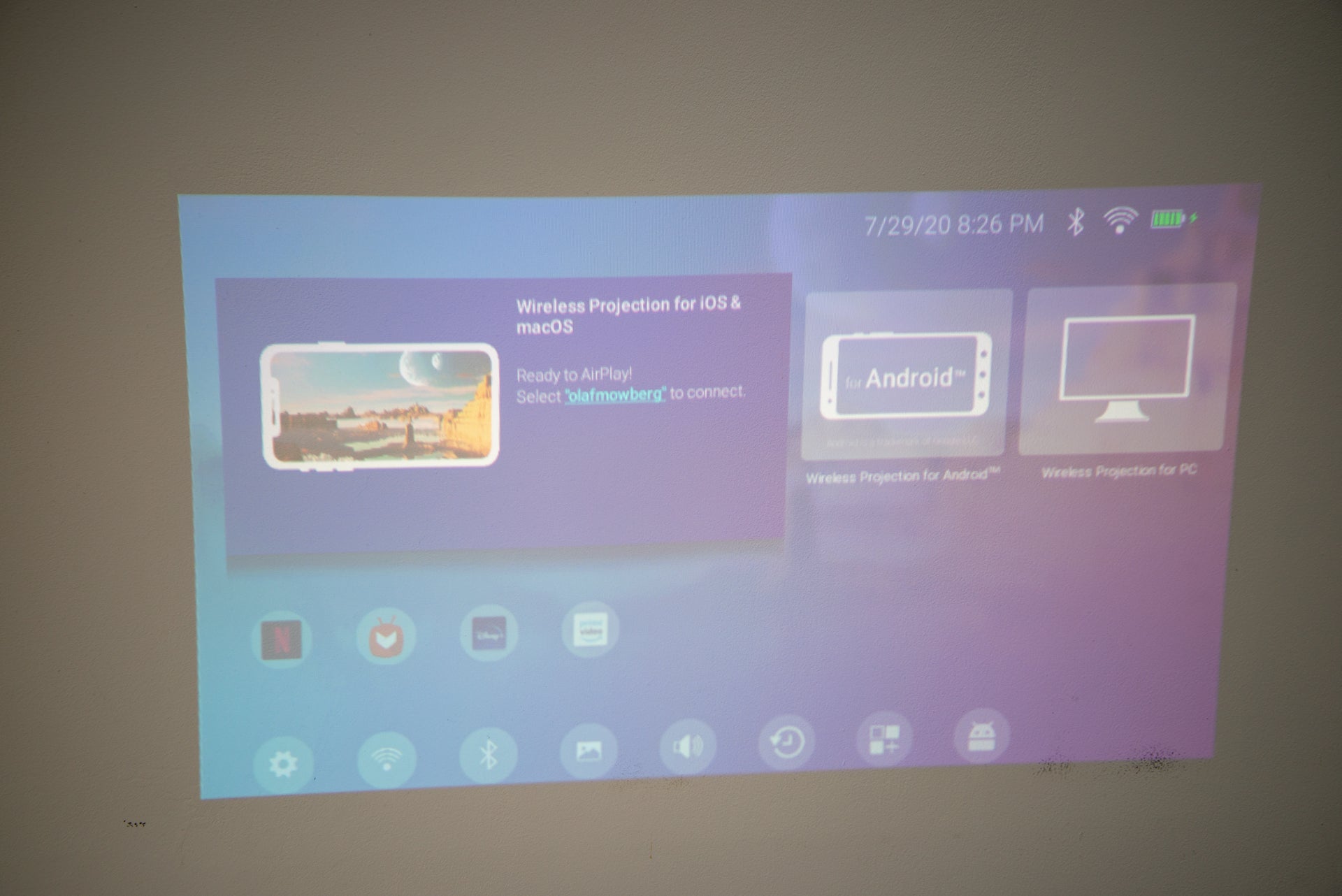 Mirroring can be done with your phone on the same Wi-Fi network as the projector, although you can also connect directly to its hotspot if you’re somewhere without an internet connection.

Fortunately, there’s Android built into the projector. This has the Aptoide app store in it, rather than Google Play, but here you can at least find Netflix, Prime Video, Disney Plus and YouTube, all of which you can download directly to the GV1. 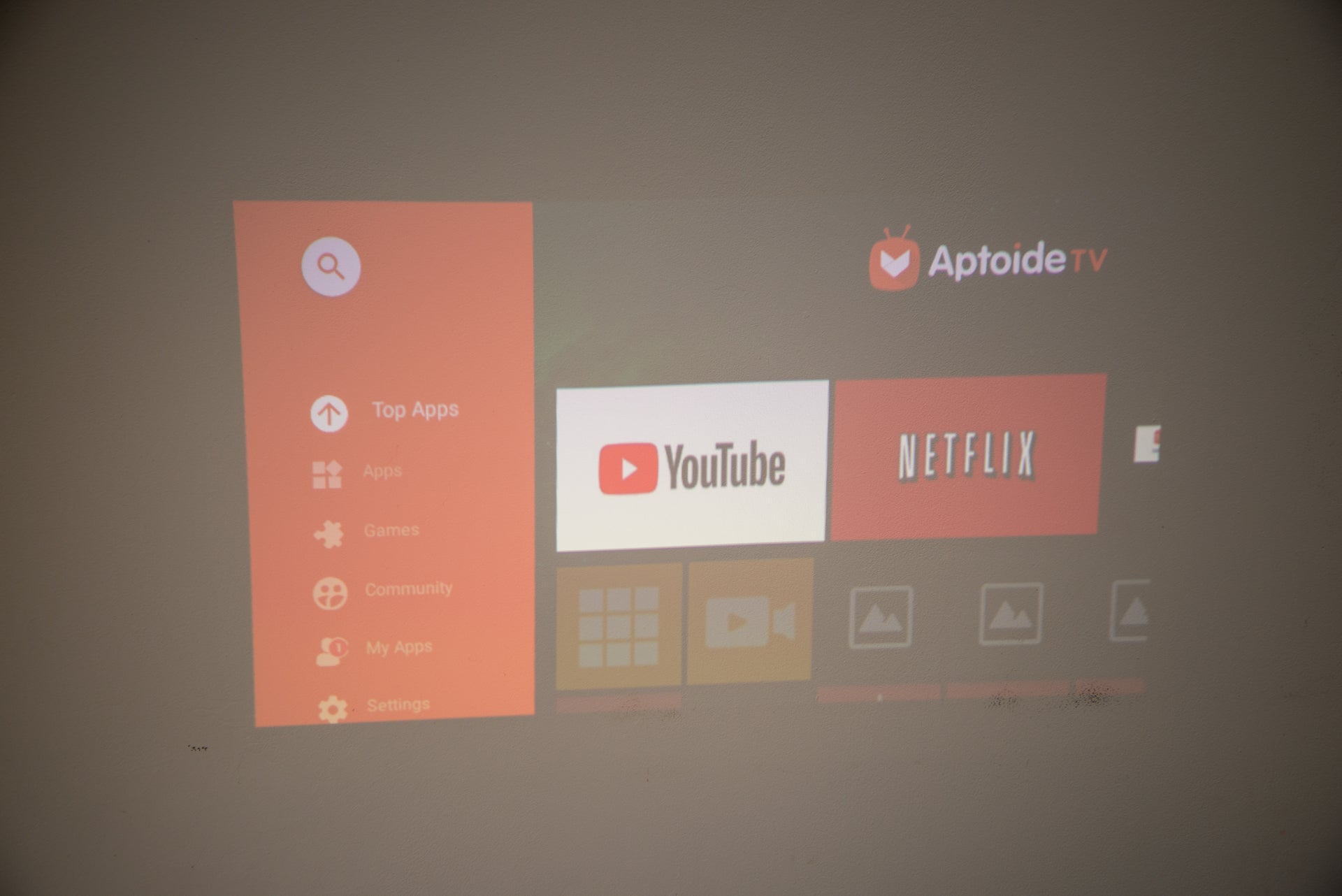 That’s good but the interface is rather horrible. All of these apps were built to use a touch interface and here you don’t have one. There’s a remote control in the box, but often its cursor keys often won’t let you select anything on screen. Instead, you can press and hold the button in the top-right corner to give you mouse mode for an on-screen cursor. It works, but it’s a lesson in patience to use the projector like this. 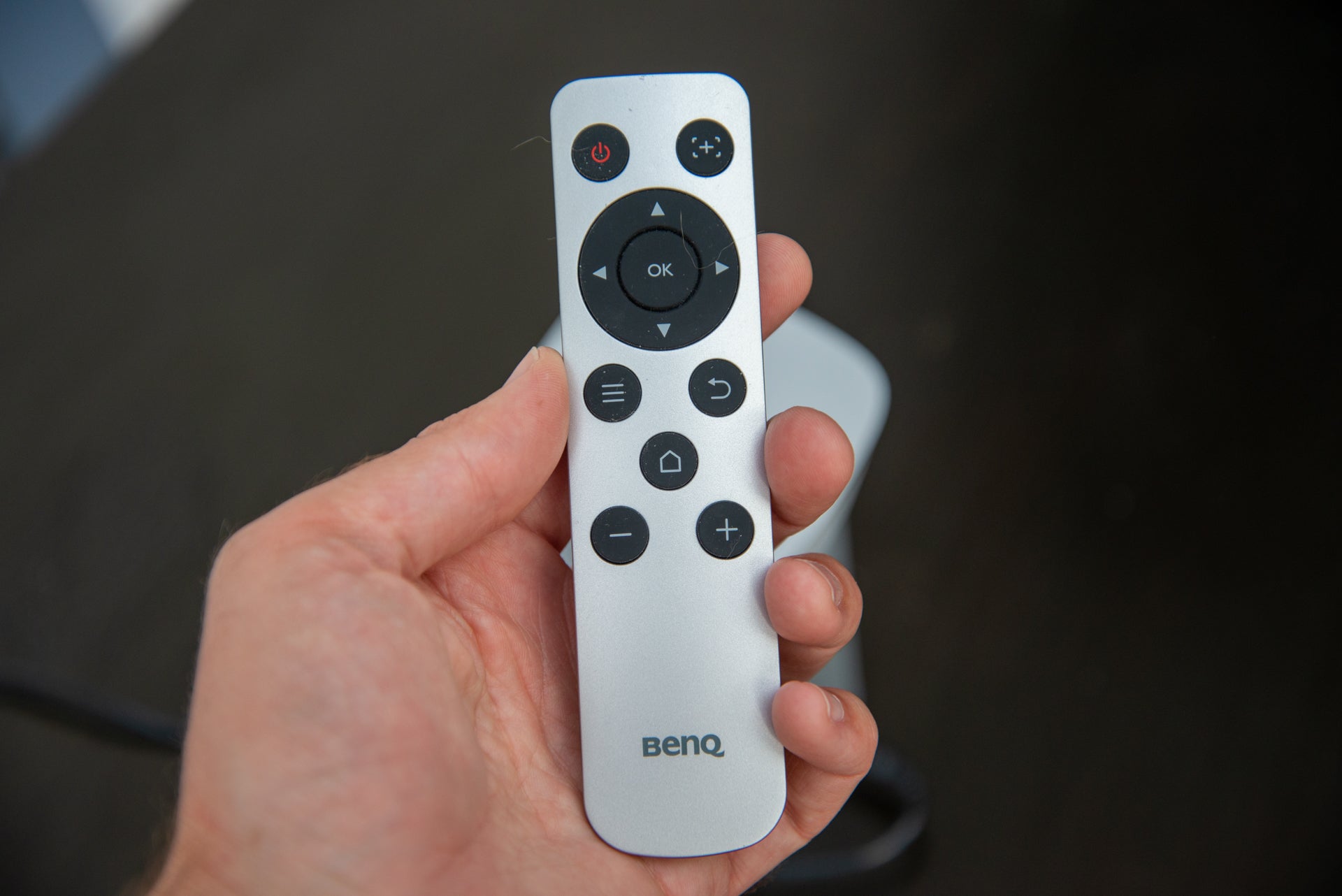 I found it easier to use a phone to first add content I wanted to watch to my watchlists in the various apps, before diving back in and playing them.

There’s a built-in 5W speaker, although you can connect a separate Bluetooth speaker if you need something a bit better.

Although the GV1 is technically capable of displaying a 100-inch picture, in reality you’re very unlikely to be able to go as big. With a max of 200 lumens when plugged, this is a projector that’s pretty dim. Try and use it during the day, and you’ll have a computer-monitor-sized display; as it gets darker (or if you close your blinds), then you can go for something around a 60-inch screen. Think of the GV1 as producing a large TV-sized picture, rather than that full cinema experience. 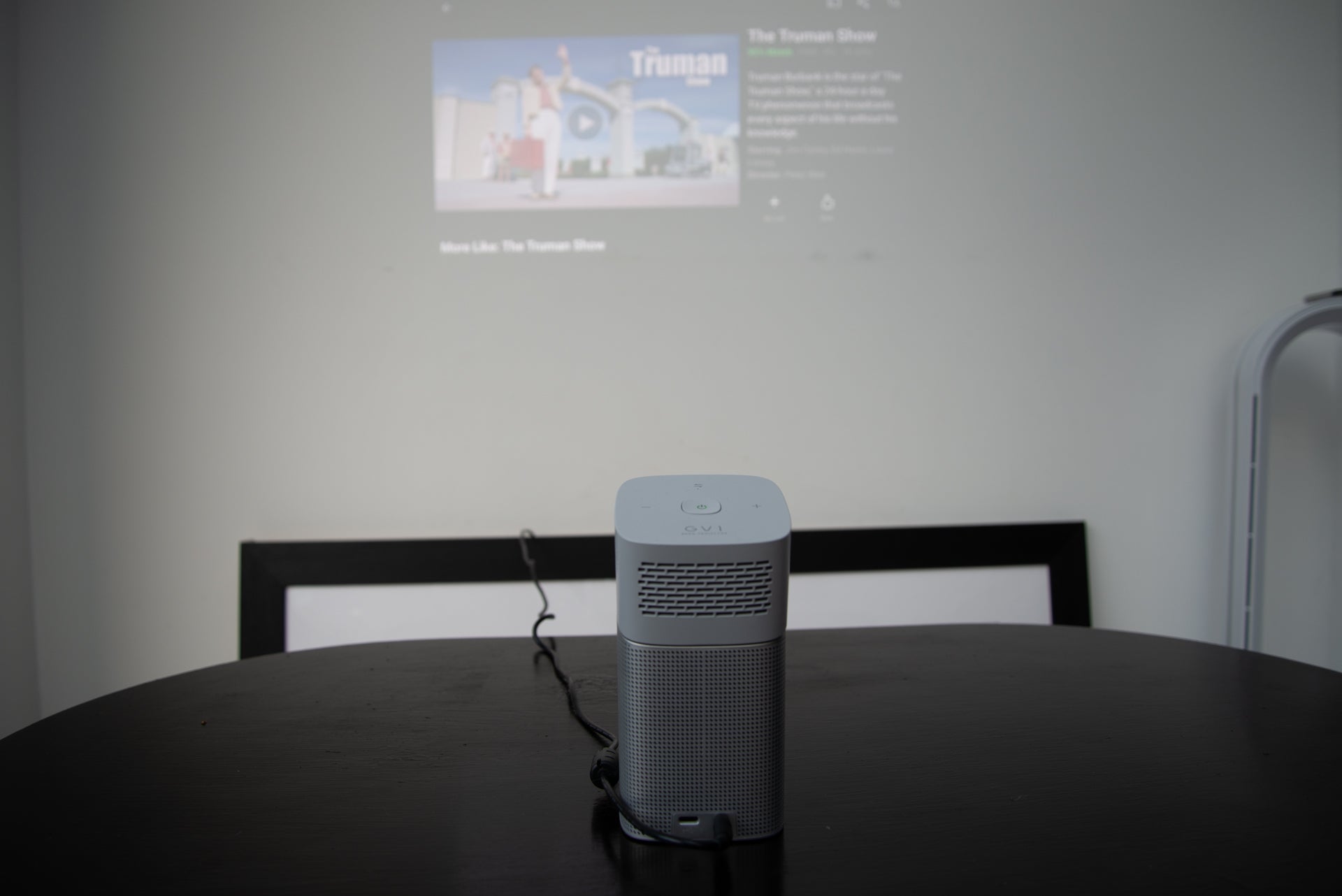 If you want to use the projector outside, then you’re going to need to wait until it’s pretty much dark. A brighter projector can be used in the shade, but not this one.

There’s a massive drop in brightness if you move to battery power too, making it even harder to work in the light. My advice is to use this projector on mains power where you can, which is made slightly more difficult by the ridiculously short power cable that makes placing the projector far enough away from a screen or wall very hard. An extension cable is definitely in order. 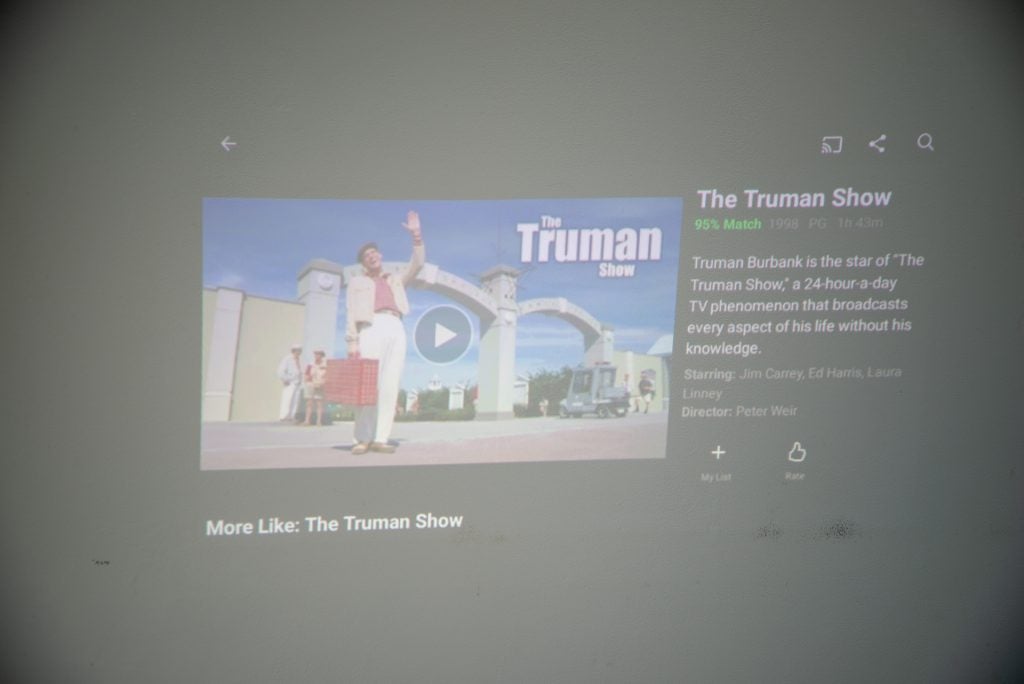 There’s auto keystone correction on board, although you should make sure that the projector is lined up straight-on to avoid having a wonky screen. Once it’s lined up, and you’ve used the dial on the side to put the picture into focus, the GV1 is a rather fun projector to use. Fiddly as they are to use, having streaming media on the device makes this an all-in-one box for entertainment.

Although there’s only an 856 x 480 resolution, this doesn’t seem to matter as much as it would on a TV. Although you can see individual pixels when you look close up, from a sensible viewing distance, the image is that bit softer and the pixels blend better. Sure, the image is a bit soft and lacks the detail of a proper home cinema projector, but you soon forget as you get engrossed in a film. 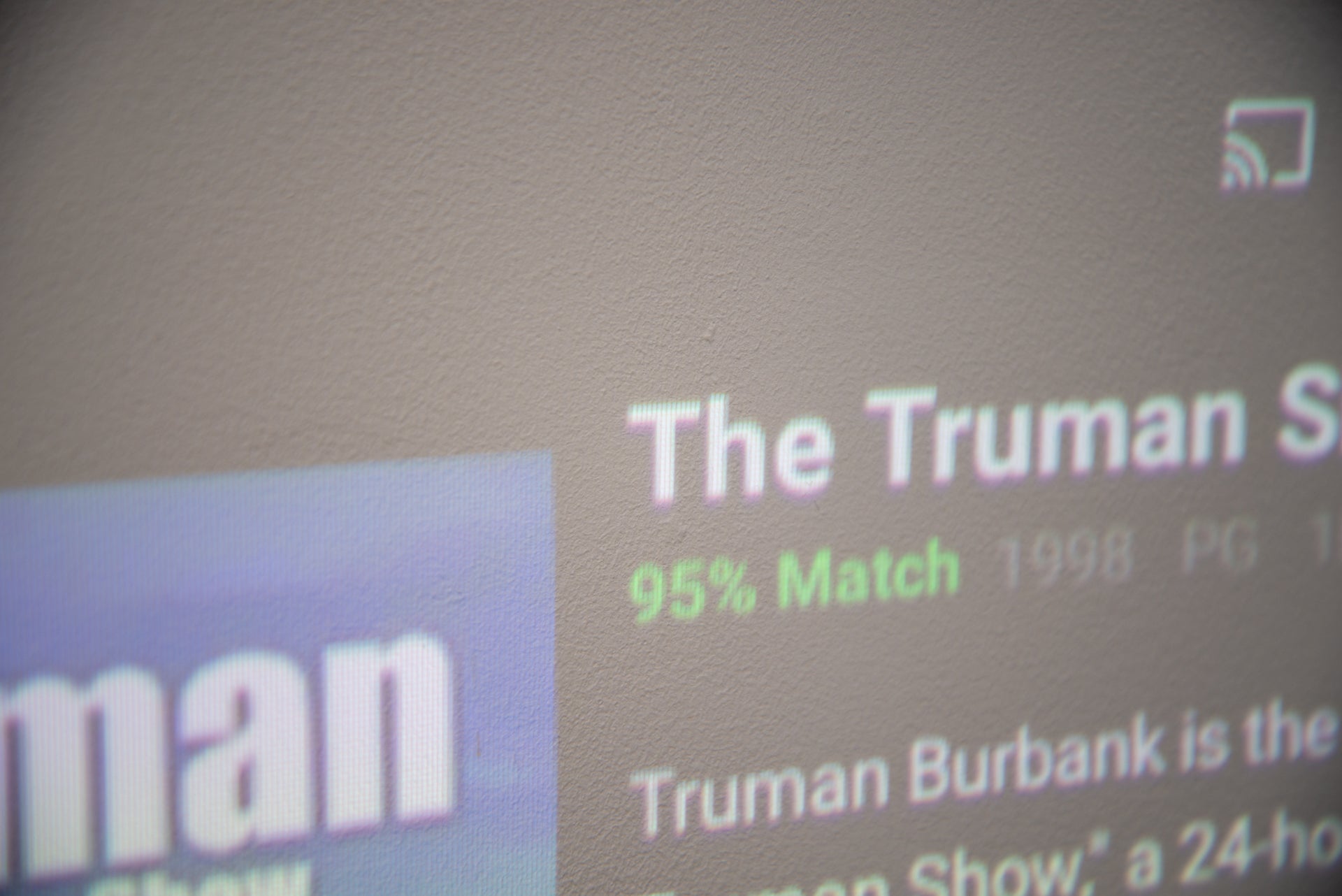 Colours are vibrant, but contrast ratios aren’t brilliant, with dark areas looking a bit washed out. Again, this isn’t a projector that’s going to win any image quality awards, but it’s good enough to enjoy and see what’s going on.

On battery power this assessment changes and, unless you’re going to watch in the near dark, the image is rather faded and washed out. Think of this as a late-night camping projector when on battery mode and it will make more sense.

There’s a 5W speaker built-in, which is just about acceptable if you sit next to the speaker in a smallish room. It’s detailed enough to make speech clear, but move further away from the speaker and the limits of its poor top volume are immediately known. Move outside and the problem is even worse, with the speaker practically impossible to hear. I recommend, where possible, using connecting the projector to an external Bluetooth speaker.

Should you buy the BenQ GV1?

Given how small this projector is, it’s a neat device to throw in a bag and watch films pretty much wherever you go. It really is a projector of compromises, though. While image quality is pretty good when plugged in, switch to battery power and the GV1 suffers a lot and you’ll need a dark environment to use it in.

The built-in Android operating system is great on the one hand, but the nightmarish, fiddly remote control interface makes using it a massive pain. Then there’s the 5W speaker, which does a reasonable job if you sit close, but you really need to think about using an external speaker.

Given the relatively high price of the GV1, it’s a tough sell to most people. Really, you need to be travelling or camping a lot to justify putting up with the trade-offs for having something so portable. Ultimately, all projectors like this have their flaws but, on balance, the Nebula Capsule is a touch cheaper, has similar features and has a proper HDMI input.