What is the BenQ GS1?

The BenQ GS1 isn’t a normal projector. Rather than being designed for a dedicated home cinema or darkened living room, it’s predominantly intended to be used… outside.

It sounds nuts, I know. But actually, if you’re looking to make camping and garden parties more fun, the GS1 has more going for it than you might think.

The GS1 is the closest thing the projector world has to a cute kitten video. For starters, it’s small. Weighing less than 1kg and measuring just 146 x 139 x 46.5mm, it slots into rucksacks and carry bags surprisingly easily. 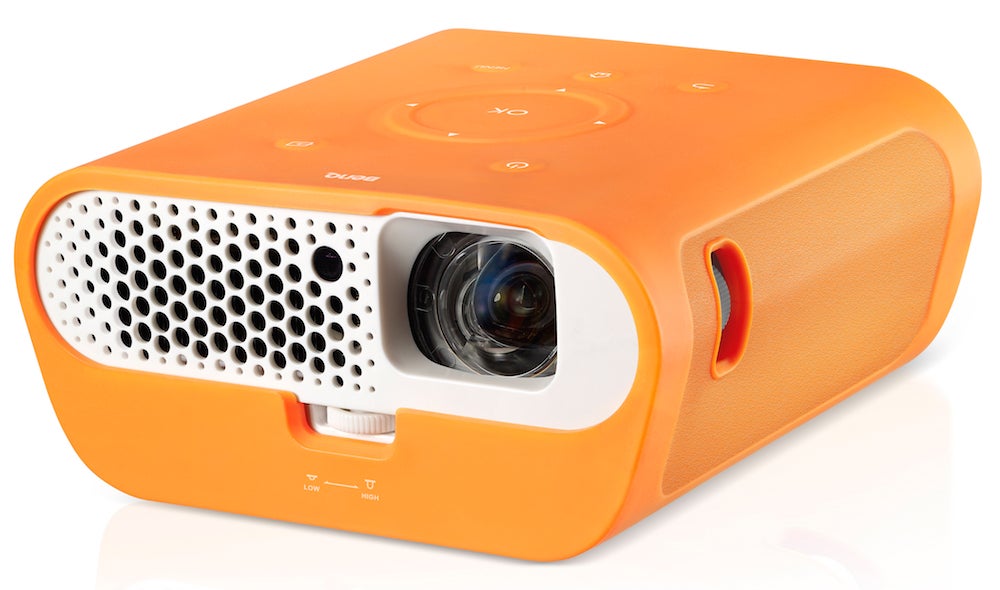 Next, it’s adorably easy on the eye. Its rounded sides, unusual rubberised finish and boldly designed front grille make it look more like a toy than a projector.

Finally, it’s fun. It ships with the option of a bright orange rubber sheath for a little more protection from the elements, or if you simply fancy a change from the projector’s regular white finish.

Clipping the battery onto the GS1’s bottom edge adds around 20mm of height and a chunk of weight to the otherwise svelte design. It still hits its ultraportable remit, though.

Even though there’s a spacious set of control buttons built into the GS1’s top edge, it ships with a remote control. This is a proper remote control too – not one of those losable ‘credit card’ designs you might have expected.

The GS1 needs to be a no-brainer to set up – and it more or less is. For starters, it has automatic vertical keystone correction to help you get the sides of the picture perpendicular. There’s also a wheel jutting out from the front edge for adjusting the projection angle.

There’s no zoom, so your image size is determined simply by where you place the projector. With this in mind, it’s good to find the GS1 using a short-throw lens capable of delivering a 60-inch image from a 1-metre throw distance.

There’s a straightforward focus wheel on the right-hand side, and a set of easily accessible connections on the rear. Most of the time you’ll have the GS1 ready to rock in a matter of seconds.

Uniquely, the GS1 includes unique daylight, ‘starry evening’ and campfire settings to compensate for typical outdoor scenarios. There’s also a Movie setting, though, if you want to use the GS1 for the occasional indoor movie night. You should use the one most appropriate to your viewing setting, as it does make a difference.

The only complication is the pairing process required to use the GS1’s Wi-Fi or Bluetooth capabilities. In truth, though, this is straightforwardly handled by the GS1’s Android operating system. 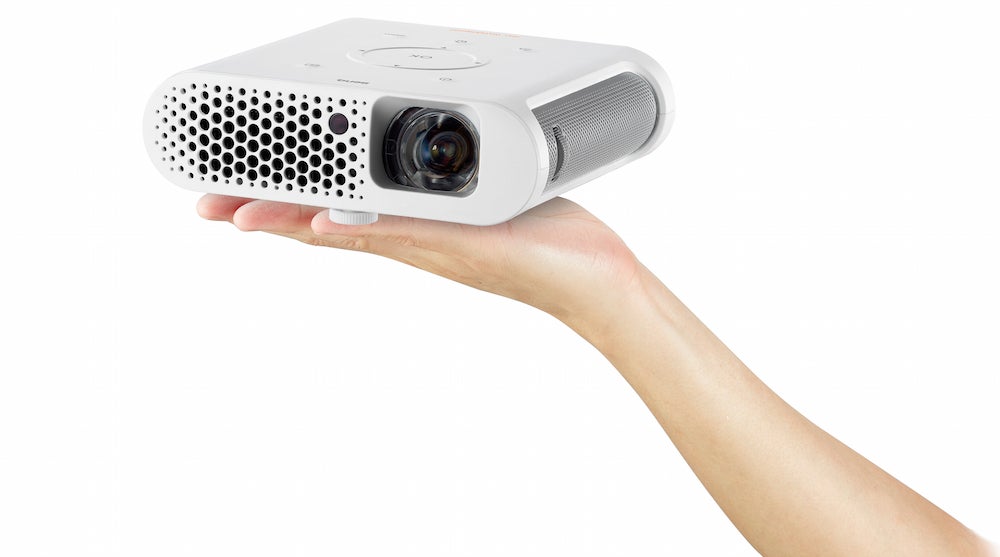 The GS1 goes to impressive lengths to support its outdoor ambitions. Its small size makes it easy to cart around a garden or a campsite. It also ships with a decent carry bag, if wrapping it in socks doesn’t feel like protection enough.

The orange rubber sheath into which the projector can be slotted is certified ‘drip-proof’, and can survive splashes from spilt drinks or even a light sprinkling of British weather.

Its short-throw lens means you won’t have to put it in a neighbouring campsite or garden to get a decent-sized picture. In addition, the selection of picture presets mentioned earlier show how serious BenQ is about the GS1’s outdoor ambitions.

Light output is rated at 300 ANSI lumens, which is decently bright by ultraportable projector standards. It proves enough to deliver a watchable – if not exactly enjoyable – picture, even in daylight conditions. Well, cloudy ones, anyway. I should add that the image sheds brightness fast if you try to go larger than 60 inches.

Contrast from the DLP projection engine is claimed to be a creditable 10,000:1, while the image’s native resolution is 720p. Of course, this means it isn’t a Full HD projector. But this isn’t a big deal on a ‘casual’ projector that’s pretty much limited to 60-inch images. 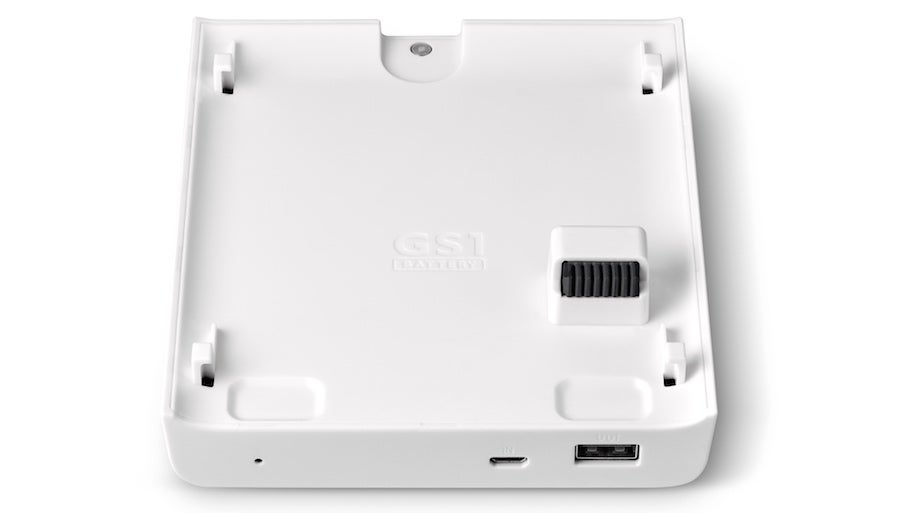 The GS1’s connectivity surpasses expectations. For starters, as well as an HDMI for direct connection of, say, a DVD or Blu-ray player, it supports a powered USB port. It can use this to take streaming sticks such as the Amazon Fire TV.

Of course, there wouldn’t be much point supporting streaming sticks if the projector can’t stream. So it carries built-in Wi-Fi for when you’re at home or on a Wi-Fi-enabled campsite. It also carries Bluetooth support for streaming from mobile phones, tablets and laptops.

Surprisingly, you don’t have to add an Amazon Fire Stick or similar to enjoy streamed video on the GS1. Among the small selection of apps provided by its built-in Android operating system is one that compiles over 100 internet video sources for you. This app even presents its TV ‘channels’ in a classic Electronic Programme Guide format.

Frankly, the GS1’s picture quality is better than I’d expected. For starters, it squeezes out every last drop of brightness from its claimed 300 lumens. This means its pictures can appear with surprising pop and dynamism when watched under a night or even dusk sky. Even if the moon’s pretty full and you’re only projecting onto tent canvas. 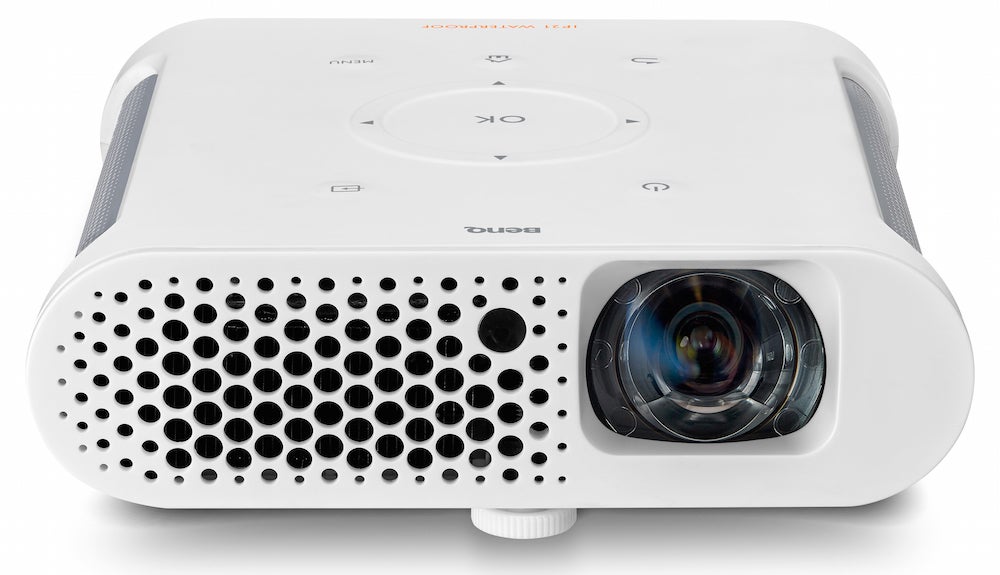 The GS1 without its battery attachment.

Despite its sub-Full HD native resolution, the GS1’s pictures look clean, crisp, sharp and detailed. More so, in fact, than some budget Full HD projectors that have come our way. Also, sharpness looks natural rather than forced. There’s no sense of the dot crawl, stressed lines or extra grain common among projectors that artificially sharpen images.

The GS1 also keeps to a minimum all the various noise issues that can be caused by DLP projection. Dark scenes aren’t plagued by green fizzing. Skin tones don’t suffer with dotting noise during camera pans. And the brightest image elements appear free of the pure RGB colour stripes witnessed on many DLP projectors.

This lack of noise helps you feel more immersed in the action, and more conscious of the projector’s impressive detailing and colour purity.

Feeding the GS1 action scenes reveals that the sharpness remains largely unaffected by blur or judder during fast motion. Impressive.

Keeping the pleasant surprises coming is the GS1’s sound quality. Although it only houses a pair of 2W speakers, it produces a sound clear that’s wide enough to satisfy a fairly large viewing audience. The sound also stands proud of chirruping crickets, babbling brooks, howling winds and other sundry outdoor sounds!

The GS1’s sound isn’t disrupted by cooling fan noise either, despite its combination of smallness and decently high brightness.

The GS1’s main performance weakness is its uninspiring black level response. Certainly, when using it for dark room movie viewing you’ll notice greyness over image areas that should look black. Only on the blackest of nights and the brightest of walls or tent canvas colours is this much of a problem during outdoor viewing, however.

The GS1’s mostly laudable brightness can plummet if you push the image beyond 60 inches, as mentioned before. But wanting to watch a screen bigger than 60 inches while camping is just unreasonable, surely?!

Why buy the BenQ GS1?

As I’m writing this in the middle of a bitterly cold December, the GS1 doesn’t exactly seem necessary right now! However, if you want to go camping next year with some form of the AV world in tow, or you fancy watching movies outside on sultry summer evenings, the GS1 is a far more capable performer than you might have expected. Its pictures even hold up decently well in a dark room indoor setting.

Also, it does no harm to the GS1’s chances that there’s really nothing out there like it right now.

The GS1 combines a range of genuinely useful ‘outdoor’ features with surprisingly engaging and punchy pictures. Suddenly, camping is starting to look like it could actually be fun.