Since arriving on the scene at the start of this year, tiny portable projectors seem to have exploded in popularity – now most of the major projector manufacturers seem to have a version on the market. The first one we saw was the Samsung SP-P400B and we were rather impressed by it but, a few months later, things have moved on and the latest arrivals can boast rather more features, as the new GP1 from BenQ amply demonstrates.


Starting with the external design, the GP1 is markedly smaller than the SP-P400B – with measurements of 136 x 54 x 120mm, it’s at least 10mm less in every dimension. In addition, the GP1 weighs just 565g, though once you factor in the power adapter, video cable, remote, and carry case this rises to 1.3kg. These figures don’t make the GP1 the smallest or lightest portable projector (that honour goes to the Acer K10 Pico Projector) but it is certainly up there. 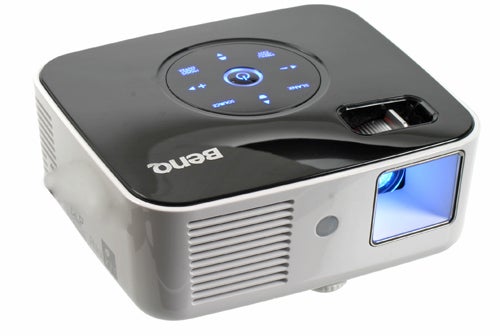 Aesthetically, the GP1 also equips itself well with an attractive two-tone glossy colour scheme. The obvious attempt at being a bit different by introducing the white is commendable but I wouldn’t say it looks significantly nicer than the pure black sleekness of the SP-P400B. The finish would probably scratch quite easily but BenQ has thought of this and included a simple, slightly-padded, carry case to keep it protected.

Back to more practical subjects and the GP1 again comes up trumps. In particular, while the lens isn’t protected by a cover, it is deeply recessed so should be kept out of harms way. Likewise, the focus wheel sits snug in its own slot and has an easy grip tab to make adjustment a doddle – something that’s also helped by its nice light action, unlike the stiff, awkward wheel of the SP-P400B. 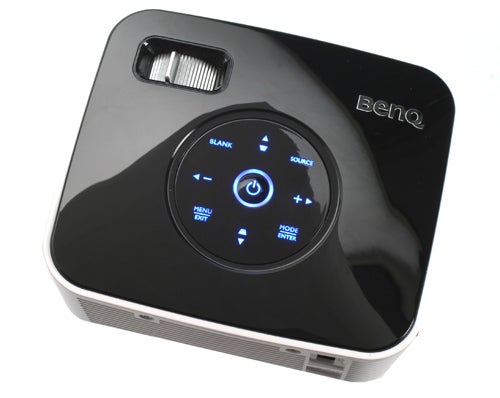 On the top is a ring of touch-sensitive buttons that are used to navigate the GP1’s various menus, change sources, adjust volume, and apply manual keystone correction. The touch-sensing can be a little temperamental, but thanks to a quiet ‘click’ from the internal speaker as you successfully touch a button, you shouldn’t find yourself aimlessly tapping away without a clue what’s going on. Also, all the buttons are backlit so you should have no problems in the dark. 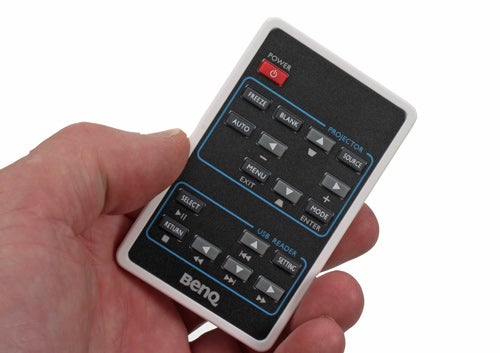 Sadly, the same praise can’t be lavished on the remote control, which lacks both the backlighting and simple logical layout of the controls on the projector itself. It’s frustrating to use at first, but with regular use you’ll soon learn to operate everything without a hitch.

What’s not immediately obvious until you’ve plugged in and powered up the GP1 is that it doesn’t actually have any video connections, or at least not of the traditional kind. The slim horizontal slot on the back, which at first looks like an iPod connection, is in fact a proprietary socket. It can be used in conjunction with an included cable that incorporates a trio of very short RCA connectors for composite video and stereo analogue audio, and a longer VGA connection (the logic for the different lengths is that you’ll likely be using long RCA cables anyway, yet will no doubt need a longer VGA lead to hook the GP1 to a notebook’s VGA socket). 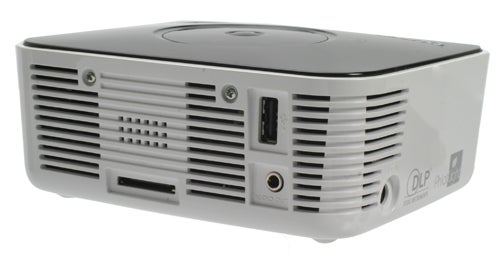 As well as these two standard video connections, BenQ has also developed an iPod dock that uses this same connection. It will be available in the next couple of months and will cost around £30, which isn’t too bad. However, we would have liked the option of buying just an iPod cable instead, at say a cost of £10, rather than a whole dock.


The GP1’s major party trick isn’t its iPod connectivity, though. It is in fact its USB support. Plug in a USB flash drive or hard disk and the projector will pop up a media playback menu. From here you can browse your pictures or play your video clips. There’s support for jpeg, bmp, gif and tiff image formats; avi, mp4, mov, 3gp and 3g2 movie formats as well as the DivX and XviD codecs. Video resolution is limited to 720 x 480 pixels so HD material is out of the question but the majority of SD material should be playable. 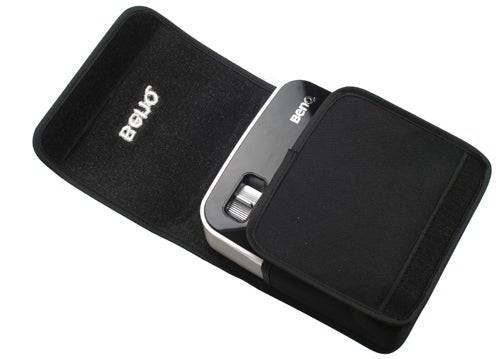 One of the touted uses for the picture viewer is as a simple PowerPoint presentation tool. It does involve exporting your presentation to a list of images but this is a task that’s quickly and easily achieved. Once done, you can just copy the files to a USB stick and use that for your presentation – your notebook need never leave your bag.


Just below the USB connection on the back is a headphone socket that, as with the SP-P400B, seems largely superfluous but given there may be the odd occasion this will come in useful we’d rather have it than not.


Another area where the GP1 manages to trump the SP-P400B is with its power supply, though it’s a somewhat hollow victory. With dimensions of 13cm x 5.5cm x 3cm, it’s a little smaller than the SP-P400B’s one but is still a fairly chunky unit that will add a lot of bulk to the overall package. BenQ is working on a mobile phone style adapter that incorporates the power supply into the actual plug, which should save some bulk, but this is a while away from being available yet. BenQ also says you can use a 19V laptop power adapter instead for added convenience (assuming the connector is compatible of course).

Turning the projector on and you’re immediately aware of the little fan that keeps the internals cool. Popping the projector into our sound-level chamber, we recorded a noise level of 38dB from a distance of about 30cm. Essentially, this translates to an annoying amount of noise if in a very quiet room but once you’ve got a movie soundtrack going it should soon be drowned out. More to the point, it’s not going to disturb your perfectly-honed sales pitch too much.

Noisy or not, what the GP1 certainly doesn’t do is set our hearts aflutter when it comes to picture quality. For a start, the 100 ANSI lumens of brightness do struggle in bright light and you’ll be forced to limit picture size to 40 inches or so. In darker environments you can get away with stretching this to around 60 inches. However, at this size the limitations of the mediocre 858 x 600 resolution (up to 1,280 x 1,024 signals can be accepted but are downscaled) are being reached. That said, for simple work presentations there is ample detail and we’d also happily use this for casual movie watching. 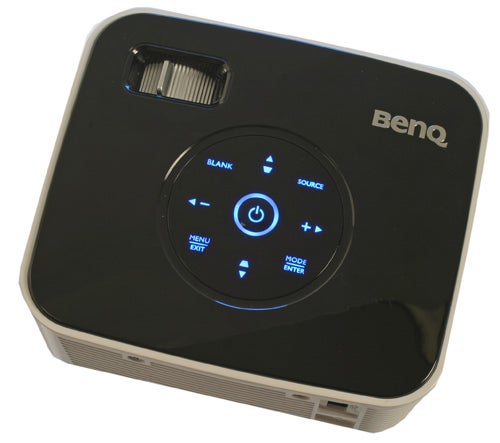 The lack of zoom makes setup a little difficult – especially for movie watching – but this is a feature all these mini-projectors seem to lack so is forgivable. Also, given the tripod mount on the bottom, those with a decent tripod will be sorted for a quick projector stand solution. Even better, though, is that automatic keystone correction is available and it works absolutely brilliantly.


Colour accuracy isn’t spot on with most of the presets erring towards an oversaturated look but is still well within the bounds of acceptability. Also, the complete lack of the dreaded rainbow effect that often besets DLP projectors will please many (the RGB LED illumination negates the need for a colour wheel – the culprit behind the rainbow effect). 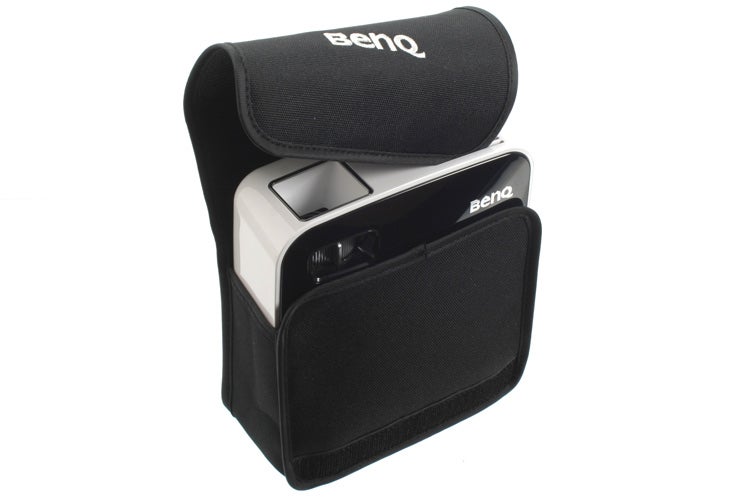 Being a DLP projector, the GP1’s black levels are also quite impressive but unfortunately detail in darker areas can get a bit lost. For the majority of subject matters this isn’t too much of a problem but dark and moody films can become a bit of a struggle to watch. Thankfully, there are plenty of options for tweaking colours, brightness levels, and contrast in the menus so you should be able to find a happy medium.


A 2W speaker (double the power of the competition) is incorporated into the chassis and it’s good enough to provide basic voice-overs for presentations but beyond that you’ll probably be best served using an alternative sound system.


BenQ is a little later than some to the LED portable projector market but it would seem the wait has been well worth it. It’s among the smallest, has the most features – including USB video playback and photo viewing – and currently is one of the cheapest in its class.