You are spoilt; spoilt for choice that is. Not long ago buying a 24 inch monitor meant spending upwards of £400, but now there are any number of models available for less than £300. We’ve reviewed quite a few of them, too, including the Samsung SyncMaster 245B, the Iiyama ProLite B2403WS and the recent HP w2408h, all of which acquitted themselves adequately and offered excellent value.


Upping the ante, though, is BenQ with its latest offering, the G2400W, which is available for just under £250 with D-SUB, DVI and HDMI inputs. You’ll guess by the emphasis that this is significant, but why? Well, 99.9 per cent of the time any budget monitor will either have DVI or HDMI, not both at the same time and given that this monitor manages this as well as being £50 or so cheaper than the competition, it’s a pretty significant selling point – particularly if you want to connect a PC, Xbox 360 and PS3 simultaneously. There’s also a headphone output, so you can plug in some headphones and enjoy the audio from the HDMI input. 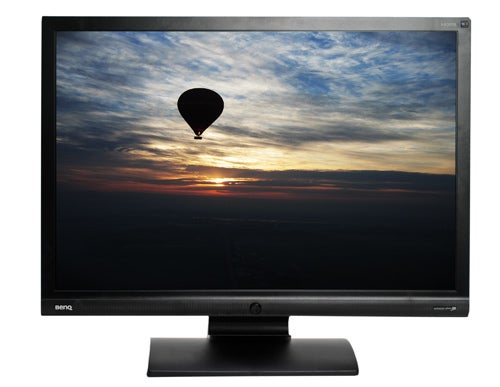 Predictably there are some immediate trade-offs because, unlike any of the monitors mentioned above, the G2400W doesn’t feature much in the way of stand adjustment. As such, you get just a standard level of tilt adjustment, with not even swivel being available. Ordinarily we’d be moaning profusely about this, but given the price and connectivity it gains some leniency. We’d still sooner see some adjustment in there and if it’s a concern for you then you might want to look elsewhere, but many won’t be bothered and the combination of price and connection options is very tempting.


It’s quite a pleasant looking monitor, too. Similar in many respects to the BenQ X2200W we looked at recently, it features a nice slim bezel finished in graphite grey plastic with speakers set into the bottom edge. There are some subtle differences, though, such as the OSD control buttons on the under edge instead of on the side, while the speaker grill on the front isn’t set back as on the X2200W. Overall, however, they both share a similarly low profile appeal that’s pleasing to behold.

Similarly, the OSD is also excellent. Having the buttons on the front, albeit on the under edge, actually makes navigation easier, while the menu system itself is identically well laid out. Options available are sufficient, with sRGB colour space support and all the usual adjustments available. You can also choose between different picture modes, with Movie, Dynamics and Photo modes on offer, though there are no game modes on this model – no great loss if you ask me.

As a general rule we don’t put too much emphasis on raw specifications, but they’re worth covering nonetheless. Obviously, being a 24 inch monitor it has a native resolution of 1,920 x 1,200, which is great for high-definition video, gaming and general use, too, offering plenty of desktop real-estate for running multiple applications at the same time. This makes it great for work related tasks as much as anything else and BenQ also produces an analogue only version, the G2400WA, that’s available – you might like to set your face to stunned about now – for less than £200.


BenQ states 24-bit (8 bits) 16.7million colour production, but since this is a cheaper TN panel based monitor it’s safe to assume this is achieved through dithering and that it’s 18-bit (6 bits) natively. For most this won’t matter much, but if you’re in need of high colour fidelity and accuracy then you’re better off shopping around – the Samsung SyncMaster 245T or XL20 would be good starting points. 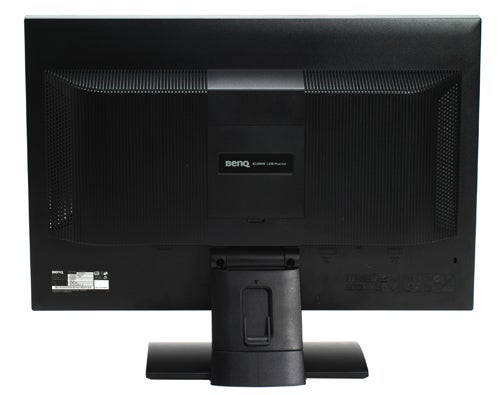 A response time of 5ms grey-to-grey is pretty much par for the course nowadays, as is the stated 1,000:1 contrast ratio. A brightness rating of 250cd/m2 is a little down on usual expectations, but in practice many users won’t need or use the elevated brightness levels offered by many monitors. Nice it may be, essential it isn’t.


One thing that’s immediately noticeable, though, is the shallowness of the viewing angles. BenQ quotes vertical and horizontal viewing angles of just 160 degrees, which is more or less accurate, and the loss of contrast and brightness in particular is very evident. Thankfully, there are no major problems with colour shift, so it remains more or less viewable from modest angles.

Setting up the G2400W proved fairly straightforward. Though it utilises a disassembled stand it’s a simple case of placing the base on the desk and slotting the main unit into it. Out of the box you get all the cables you need, including D-SUB, DVI and obviously a power cable and though you don’t get an HDMI cable, we wouldn’t typically expect one. Moreover, we found that the unit came satisfactorily calibrated, so there was little need for adjusting brightness, contrast, or any other setting for that matter. For those who want to wall mount there’s a VESA standard mounting on hand, making it compatible with nigh on 100% of monitor arms.

Initial impressions of the image quality and performance are varied. Text is clear and sharp, with a nice level of contrast and definition all the way down to 6.8 in the Arial font. Having seen a great number of “high colour gamut” monitors of late the lack of vibrancy in this standard 72 per cent gamut model is noticeable, though among cheaper 24in LCDs only the HP w2408h can claim a higher colour gamut and it’s the more expensive of the current crop of TN based displays. Compared to either the Samsung SyncMaster 245B or the Iiyama ProLite B2403WS, the colour production is more or less identical and though it isn’t superbly vibrant, it’s not dull or pastey.

Looking at some display tests it’s clear that the G2400W struggles in all the areas you’d normally expect in cheaper monitors. Dark level detail is lacking, with darker shades of grey indistinguishable from a black background. Shading is, however, pretty decent with little in the way of nasty brown/yellowish contamination of dark grey shades. Equally, at the brighter end of the scale you can’t quite distinguish the lighter shades of grey against a white background and while some shades do have a bluish tinge in sRGB mode, it’s fairly minor.


Meanwhile, in the 256 colour intensity scales there is a very subtle level of banding. It’s faint, but it is there and this is clear evidence of dithering, where the monitor is artificially making up colours to make up the full set. This is also noticeable in colour scales and though the whole scale is produced well enough, the definition between colours in the middle of the scale in particular isn’t what it could be. Overall, though, in colour production the G2400W makes a decent effort. Only the more discerning will notice and/or be bothered by its deficiencies, while for gaming, which is generally more forgiving, it’s more than adequate while obviously offering that large and desirable 24 inches of viewable area.


There is, however, one significant caveat because although the colour production is largely adequate, the G2400W does exhibit significant levels of backlight bleed. It’s most noticeable from the bottom left quadrant, but is also evident across the bottom edge and to a lesser extent the top as well. Indeed, turn out the lights and look at a black screen and you’ll see that overall the black levels are weak, with a generally grey look that varies across the screen.


This overriding greyness is borne out in videos, which are most sensitive to the vagaries of poor black levels. As a result, video playback is tolerable but it’s by no means outstanding. Of course, you can still play high-def content and it’ll look suitably sharp, but TV quality it won’t be and you’ll be missing out on a lot of finer detail.

That pretty much sums up this and many other cheap 24in LCDs. They’re solid efforts and if all you want is lots of desktop space then they’re great, while low response times means they’ll deal with motion better than most. But their limitations are very clear, with competent but dull colour production and poor black levels.


But with that said, how does BenQ’s effort stack up against other offerings? If you take a look at our other reviews you’ll see that we’ve scored this BenQ identically to both the Iiyama ProLite B2403WS and Samsung SyncMaster 245B. Each has their own strengths and weaknesses, with performance that’s more or less identical. If forced to choose based on image quality alone the Samsung would probably win out, but it’s a marginal distinction. 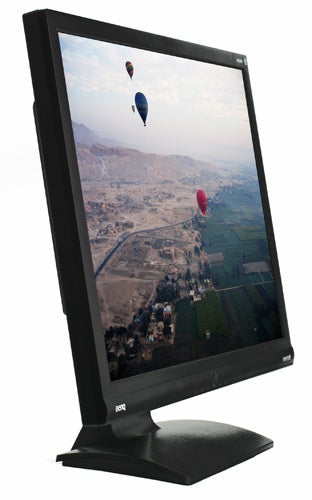 Where the BenQ really wins, though, is in both value and connectivity. It offers superior connectivity and is noticeably cheaper, and despite lacking some adjustability, it’s a bearable trade-off. It’s even cheaper still compared to the HP w2408h and though it has the edge in design and colour fidelity, its glossy and highly reflective finish could put some off. Ultimately, all of the montors mentioned here are excellent options, so it’s worth investigating each before making your final choice. However, if money is tight, then BenQ’s G2400W could well be the one to pick.


Image quality is average and there’s next to no adjustment, but BenQ’s budget 24 inch display is still a serious contender. Its trio of D-SUB, DVI and HDMI inputs gives it the edge in connectivity, while it comes in at close to £50 less than the competition based on current prices. This makes it a very tempting proposition for the gamer on a budget, while the home office user will find the analogue only version at under £200 a great investment.