The BenQ EX2780Q is one of the most ambitious screens I’ve seen for some time.

This panel doesn’t just offer a 1440p resolution and 144Hz AMD FreeSync 2 – it also comes with a surprisingly powerful set of speakers alongside some HDR-based innovation.

Design – Eye-catching, and it comes with decent speakers

At its core, the BenQ is a 27in display with a 2560 x 1440 resolution. That’s a solid start: the resolution means plenty of pixels are available to make games and movies look good, and the density level of 109ppi ensures that everything on this screen will look crisp.

Obviously, you’ll get more detail on a 4K display. However, such a display will not only be more expensive, but it will only work well with a smaller and more expensive range of graphics cards. 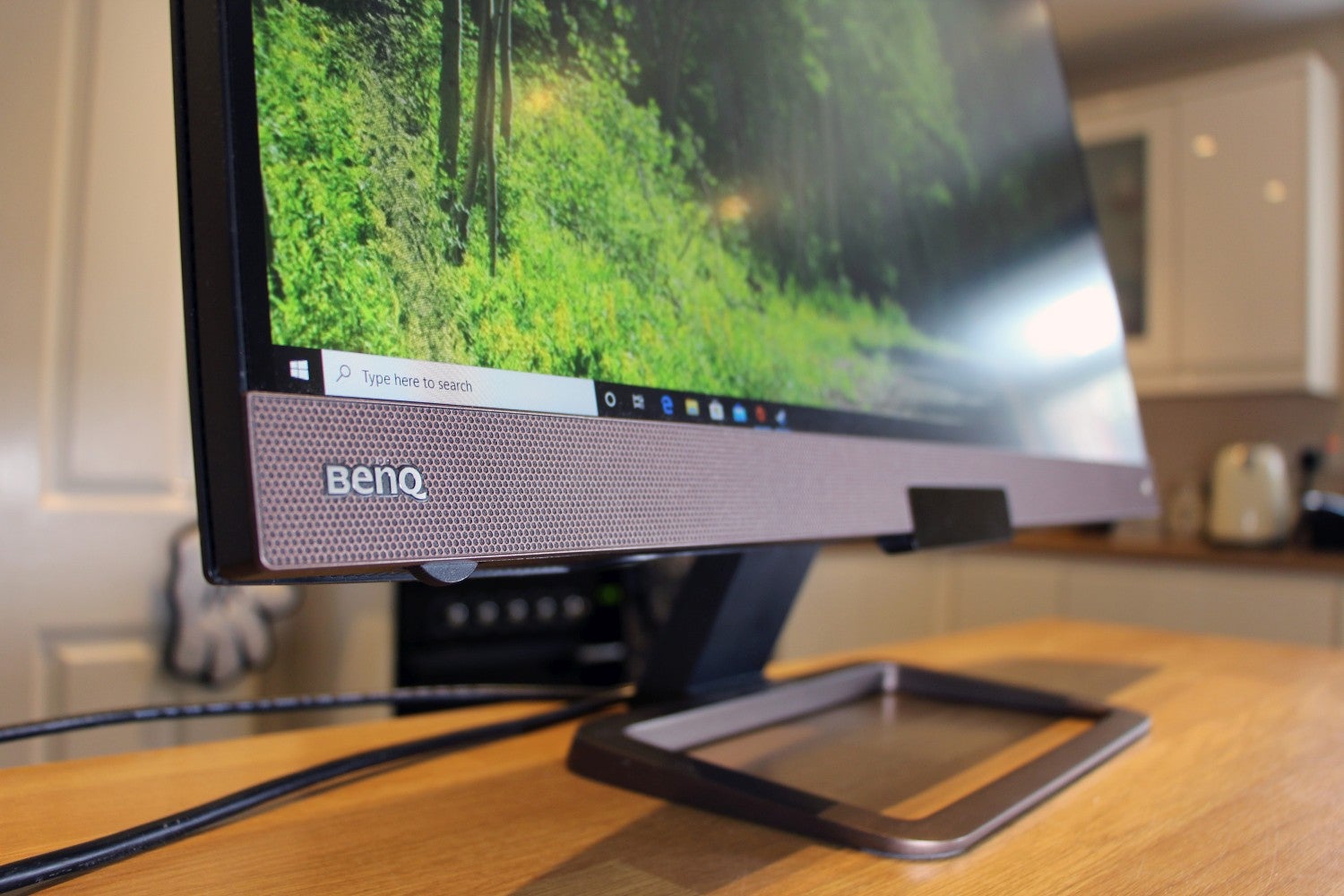 The BenQ uses IPS technology with 10-bit colour, resulting in an excellent reproduction of colour. However, the potential drawback to IPS is underwhelming contrast.

There’s one minor downside to the colour situation. Connect using DisplayPort, and you can only use 10-bit colour if you run the screen at 120Hz or below. Use HDMI, and you’re restricted to 60Hz. It isn’t a huge issue: if you want the peak 144Hz refresh rate for gaming then 8-bit colour is fine, and you’re unlikely to need the higher rates if you require 10-bit colour for work. However, it’s worth bearing in mind.

That IPS panel is a mainstream choice, and other areas of the specification also reflect this mainstream leaning. The 5ms response time is great for movies and mainstream games, but keen eSports players will require more speed. 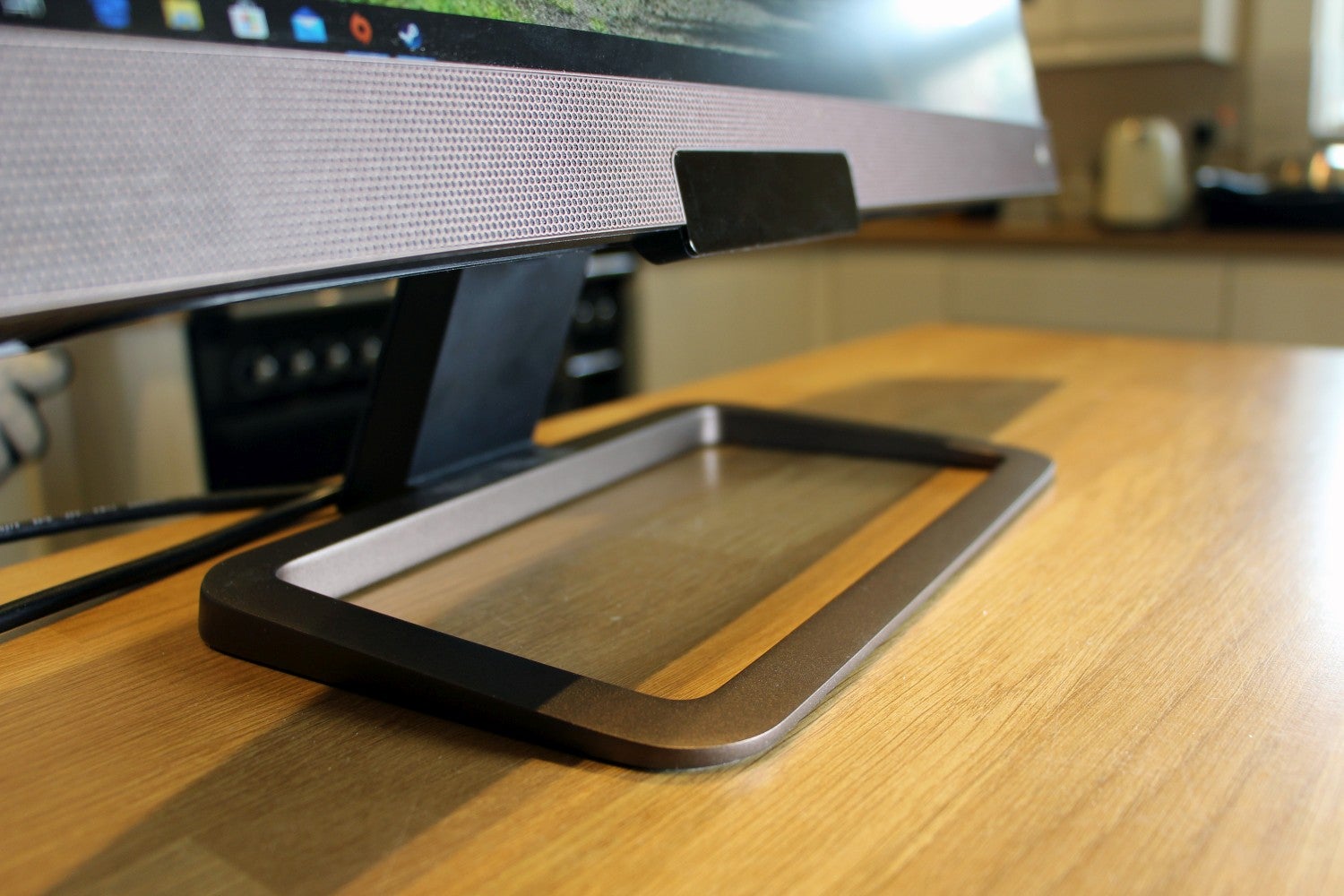 The 144Hz refresh rate is high enough to ensure butter-smooth gaming in top AAA titles and in the majority of eSports games. The BenQ uses AMD FreeSync 2, which means it works flawlessly with both AMD and Nvidia graphics cards.

However, high-level competitive gamers will want a 240Hz panel. To get one with a specification to match the BenQ will cost you closer to £600 or $800.

The BenQ is one of the only small gaming monitors around to pay attention to audio. Unusually, the EX2780Q features two 2W speakers and a 5W subwoofer with a volume wheel beneath its bottom bezel. 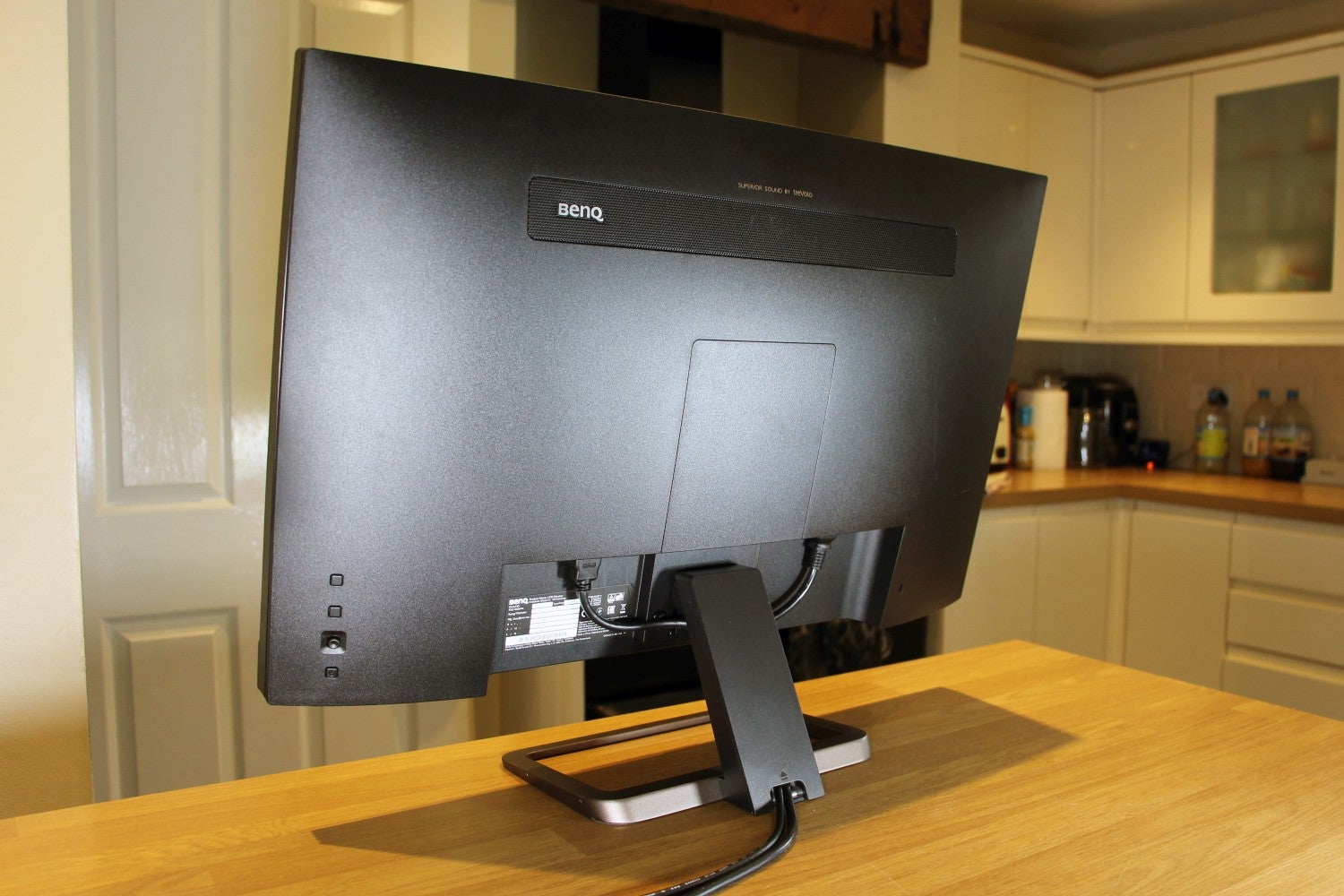 The speakers are some of the best I’ve used on a gaming monitor. The subwoofer provides huge bass punch; elsewhere you get a strong, detailed treble range and enough volume to fill a medium-sized room. The high-end does get a little lost, but it’s a minor complaint.

The BenQ’s speakers aren’t as good as affordable desktop units or using a headset, but they’re far better than virtually every other gaming display – and they’re perfectly usable for gaming and media.

The extra audio hardware goes some way to explain the BenQ’s aesthetic. This display’s bottom bezel is huge and is decorated with a copper-coloured grille. It’s eye-catching and potentially divisive.

Related: The best free games on every platform

OSD and setup – A bit wobbly, but the joystick works well

A good specification and eye-catching looks may be a draw, but the BenQ EX2780Q is more limited in some practical areas.

There’s hardly any adjustment available: it tilts back and forward and works with 100mm VESA mounts, but that’s it. 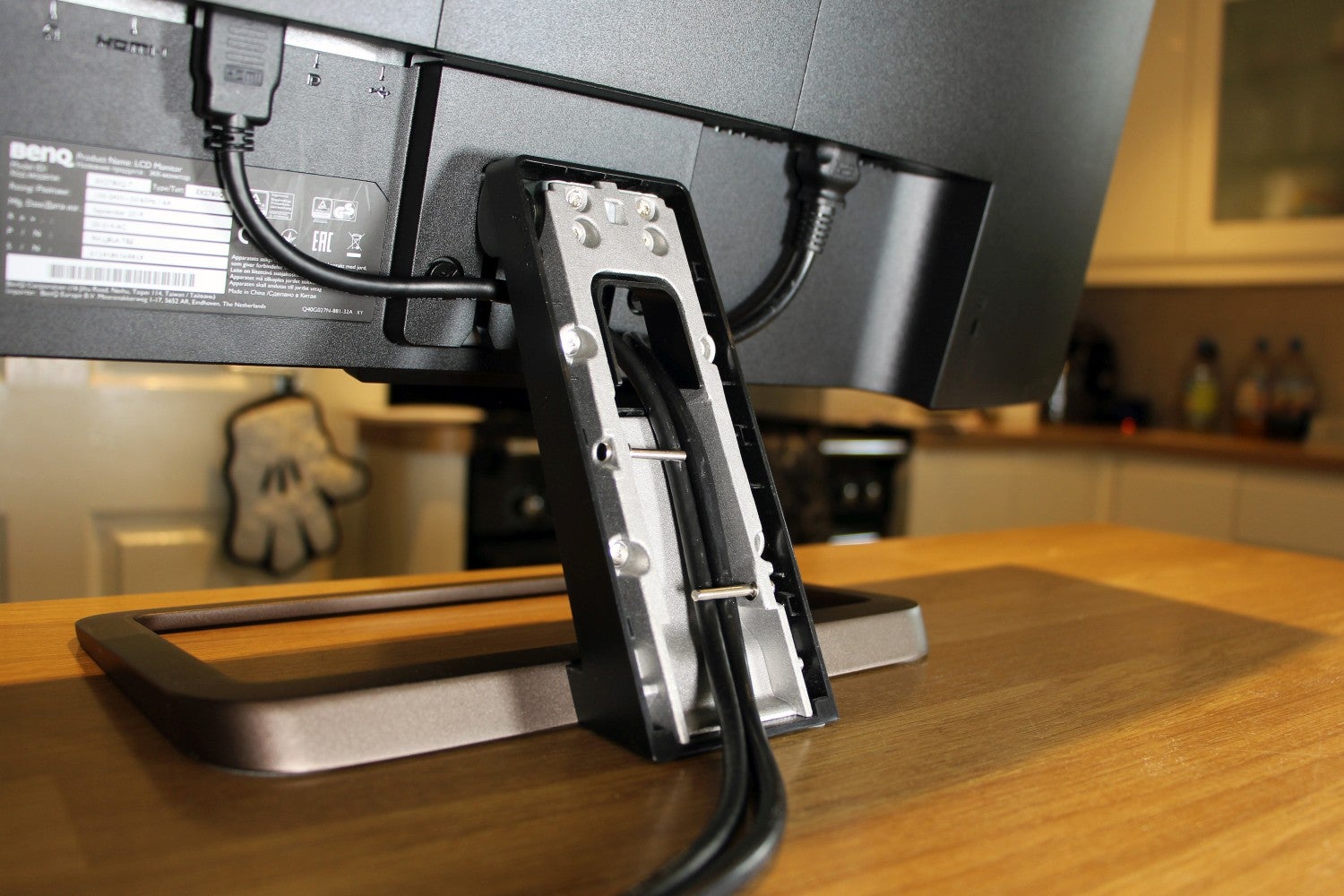 Two HDMI 2.0 ports – one DisplayPort 1.4 connection and a USB-C port – are fine for display connectivity, but there are no extra USB ports and that USB-C connector doesn’t deliver power.

The build is mixed too. The base attaches to the stand with a tool-free mechanism, and the weight of 2.7kg is decent. I also like the cable-routing mechanism, which hides wires in a cavity at the rear of the stand. However, the stand has to be attached using awkward screws, and the panel itself is a little wobbly. 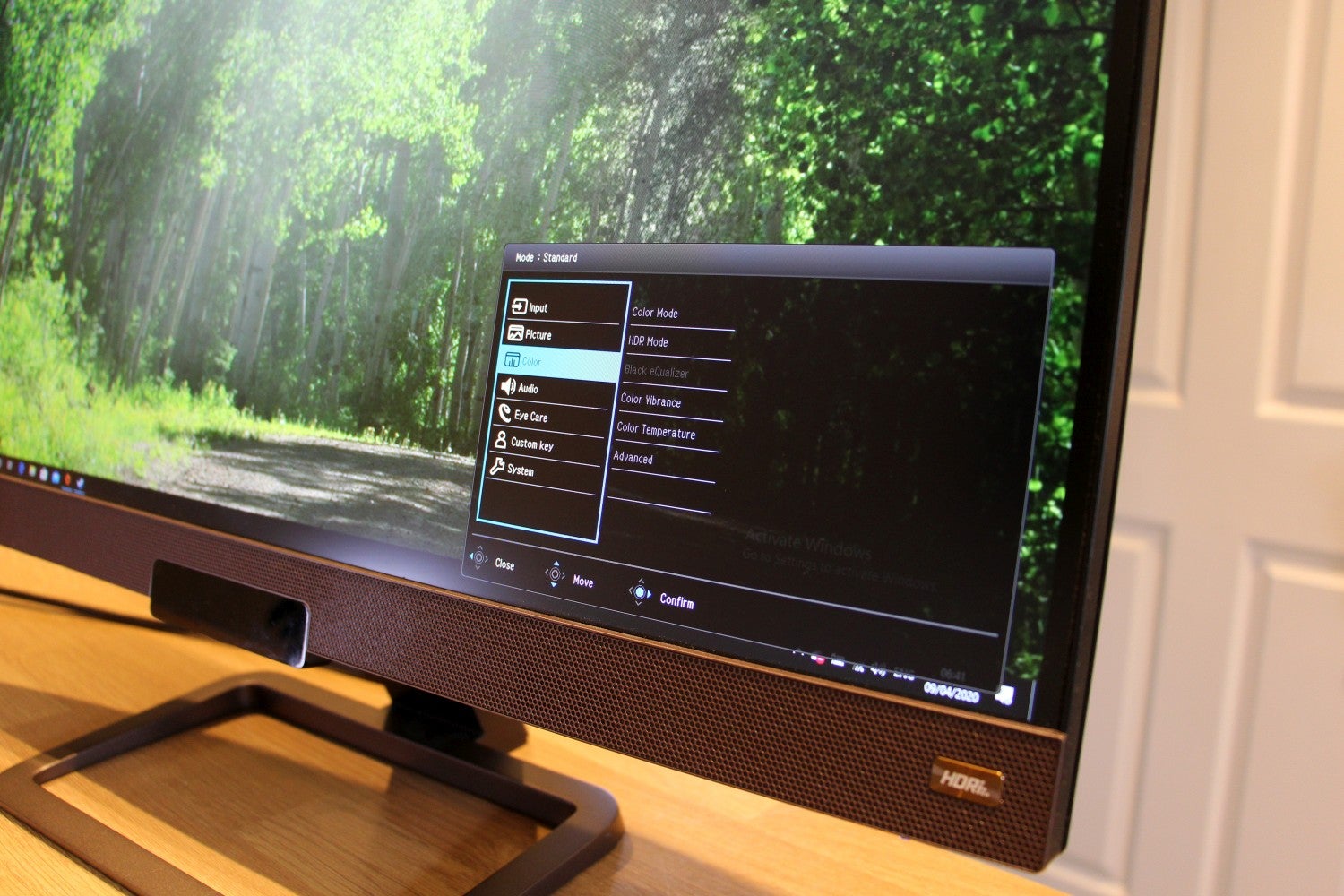 The experience is better once the BenQ is set up. Its on-screen display is fast, easy to navigate and well organised. The joystick and buttons on the rear are snappy and sturdy, and the BenQ also comes with a remote control.

IPS screens tend to display superb colours, but middling contrast and the BenQ is no different in this regard. Its Delta E value of 2.74 is good, which means the BenQ’s colours are easily accurate enough for gaming, movies and media.

The colour temperature of 6534K is excellent, and the gamma average of 2.15 is reasonably close to the 2.2 ideal.

The BenQ rendered 99.9% of the sRGB colour gamut and 95.3% of the DCI-P3 colour space, which means this display can produce virtually every shade required by conventional and HDR content.

A default brightness level of 272 nits is decent, but the black level of 0.25 nits is mediocre. Those figures create a contrast ratio of 1088:1 – reasonable, and it’s high enough to handle most gaming and media scenarios. However, it’s still only around half as good as a VA panel, which means colours aren’t quite as punchy and black levels aren’t very deep. 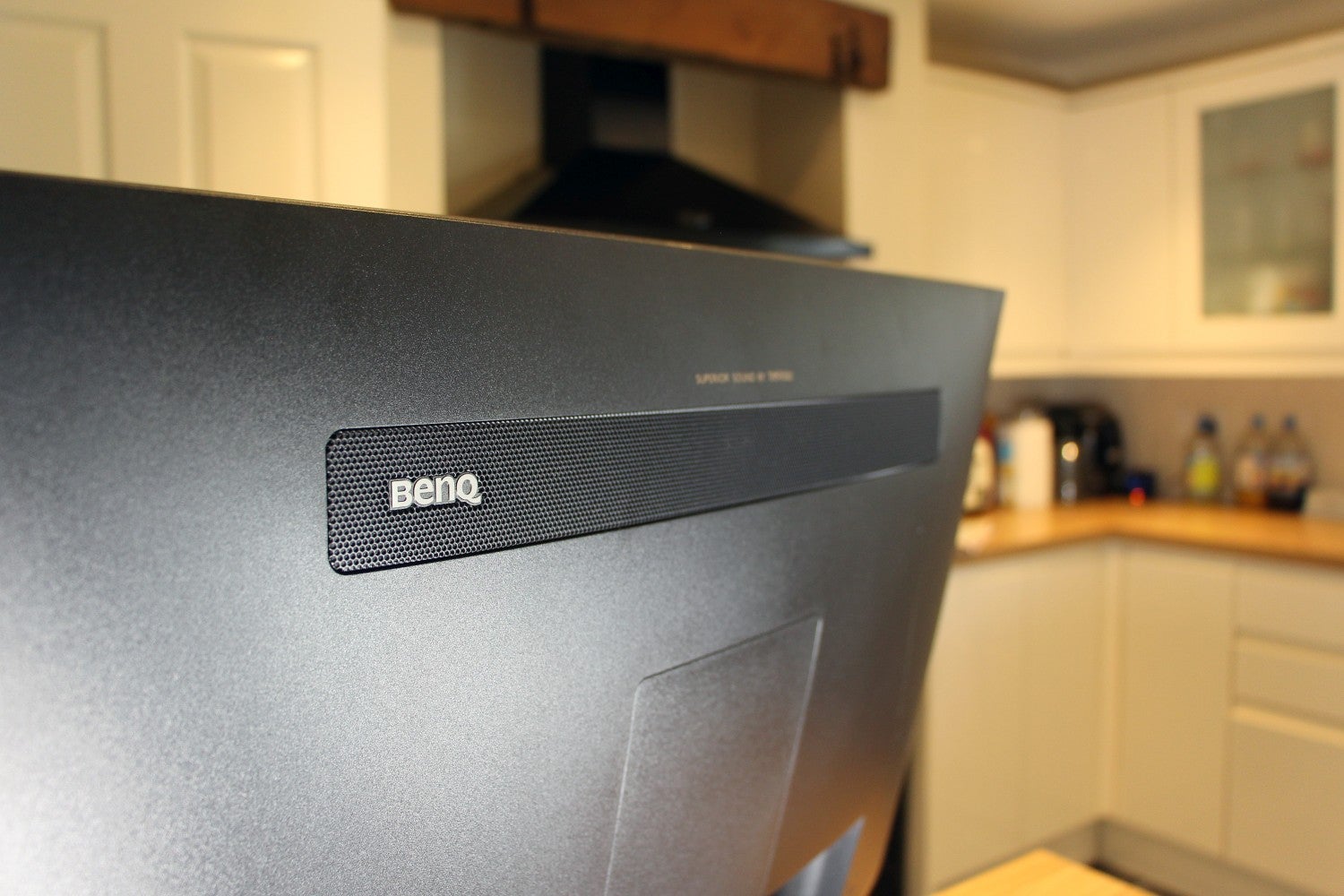 Uniformity, too, is mediocre. On the left-hand side, the panel lost 14% of its brightness; along the right-hand edge, the backlight weakened by up to 22%.

The BenQ’s IPS construction also impacted on its HDR performance. The EX2780Q has a system called HDRi, which has different modes for different HDR-focused tasks alongside dynamic backlight adjustment.

In practice, HDRi is inconsistent. It has Game, Cinema and Display modes, but there are issues with all of them: the Game mode is cool; the Cinema option suffers a red hue; the Display option is slightly pallid. Across all three modes, text is so sharp that it looks pixellated. Turning down the sharpness options in the OSD fixed that particular problem, but it isn’t something that should have been required. 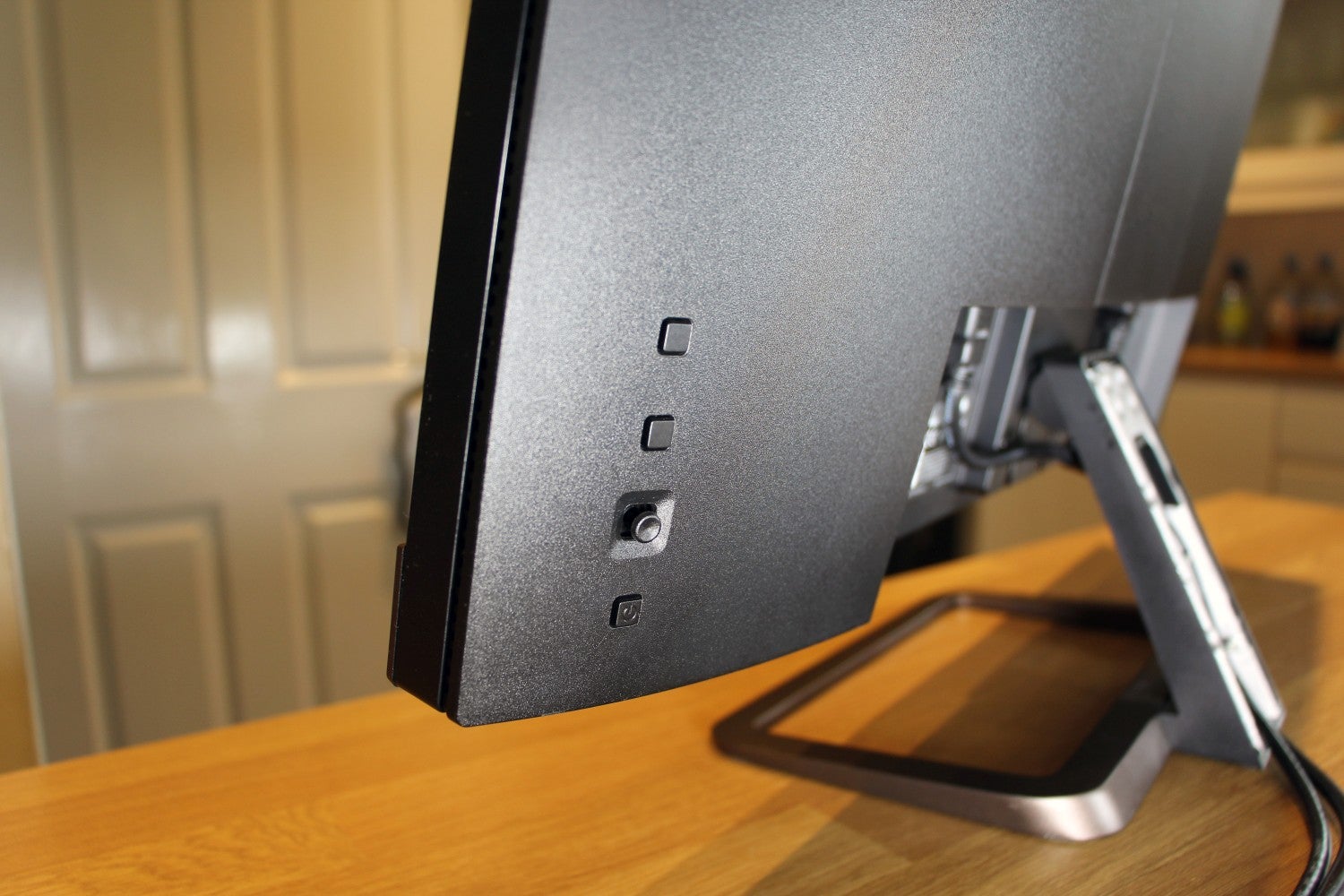 There’s also the fact that the BenQ is only certified for DisplayHDR 400 – an entry-level HDR standard. In its HDR modes, the BenQ reaches a peak brightness of 465 nits, which means it outstrips DisplayHDR 400, but that brightness level is still a long way short of the best HDR displays.

Get past the crisp text and the minor colour issues, and HDR games and movies do get a boost on this display – there’s a modest improvement to contrast and colours, with bolder shades at the top end and better depth at the bottom of the gamut. The jump isn’t huge, but it’s a better option than other affordable gaming panels that barely meet the requirements of DisplayHDR 400.

This display isn’t the best option if you’re really interested in HDR, though – it’s still an IPS panel with a relatively weak backlight and relatively underwhelming contrast levels. It makes an impact, but it’s some way short of being transformative.

Related: The top digital board games to play right now

The BenQ EX2780Q is at its best when handling mainstream duties. Its size, resolution and decent colour performance help games and movies look great, and there’s enough contrast to deliver ample punch for those scenarios.

Elsewhere, the BenQ has some of the best speakers I’ve heard in a monitor, alongside bold design and a remote control.

Beyond this, the BenQ suffers. Its HDR options are underwhelming, its uniformity is inconsistent, and it offers few adjustment options.

The BenQ EX2780Q is ideal if you want a one-stop solution for gaming and media, without having to mess around with headsets and speakers. For punchier contrast, better HDR or specific gaming features, however, you’d be better looking elsewhere.