As recently as three years ago, buying a good monitor – in
other words, one not based on TN panel technology with its poor viewing angles
and colour characteristics – meant shelling out serious money. More recently, however,
affordable yet high-end displays like the IPS-sporting NEC MultiSync EA231WMi and the even cheaper cPVA Samsung SyncMaster F2380 meant even users on a budget could still get displays
that were a level up.

BenQ got into this game with its 24in VW2420H, which we found to be impressive for its price. Now the monitor giant
has a new model for the same tantalizing £177 as that display originally sold for. The BenQ EW2430 not only offers 24 inches of PVA goodness, but
also gives you dual HDMIs as well as a USB hub, and packs it all into an
attractive chassis with a brushed metal stand. Let’s find out if it’s the new
budget champion for those discerning in their monitor taste.

The EW2430 arrives in two parts which are easy to assemble.
We were afraid the display’s low price might be evident in its build quality,
as has been the case with past BenQ models such as the V2400W. Thankfully, this is not the case, and
the EW2430 feels solid throughout. In particular its stand is one of the more
solid examples we’ve come across.

There’s only so much you can do with a monitor’s design
within a tight budget, but BenQ has managed to make its latest model stand out
from the crowd with an all-metal stand that utilises a combination of brushed
metal and chrome. The screen itself is surrounded by the usual glossy black
plastic, but a brushed metal strip at its base and silver outer rim help to
maintain a stylish slant. 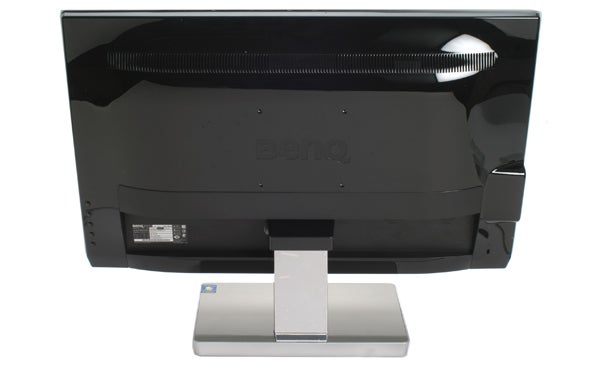 One thing the EW2430 isn’t is thin. Despite featuring LED
backlighting, it would need a few months on a strict diet to match the VW2420H.
But that’s not necessarily a bad thing; after all, at 4.8cm it’s already thin
enough to be practical.

Though it’s hardly unexpected, we’re also slightly
disappointed by the lack of extensive ergonomic adjustability. As with most sub-£200
monitors, there’s no height or rotation available, just tilt. You’ll get about 25 degrees of movement, and the action is nice and smooth. 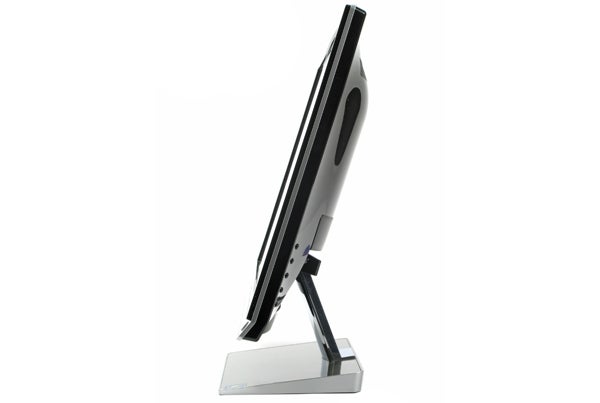 One area where the EW2430 doesn’t compromise is in energy
savings. Once calibrated in sRGB mode, even watching a relatively bright video
kept the amount of juice consumed below 17.5w, though obviously this will
increase if using the hub and audio. The monitor doesn’t get hot to the touch,
and there’s no noticeable buzzing

Connectivity is where the BenQ EW2430 really sets itself
apart from similarly-priced competition. For video there are two
HDMI ports and a DVI connector. If your laptop doesn’t offer a digital
output, fear not, as good old VGA is also invited to the party. This is a
superb selection of video connections, and means you can hook up your PS3 and
Xbox 360 along with a PC and laptop or netbook without needing to purchase a
separate HDMI switcher.

A USB port at the back provides the link to the integrated
four-port hub that’s easily accessible at the monitor’s left side. Of course
the HDMI ports carry audio, but BenQ also provides 3.5mm line in and out jacks,
in addition to a dedicated headphone jack. BenQ has truly outdone itself here,
and our only niggle is that it maintains the habit of not including a digital
video cable in the box, though you do get ones for VGA, audio and USB.

A metal power button that’s circled by an LED ring sits on
the front. It glows green when active and orange
when in standby. The rest of the controls are located around the monitor’s
rear, though they’re easy to find with your fingers and icons on the front
bezel let you know which button you’re pressing. The buttons themselves are a tad too stiff but
otherwise quite usable. 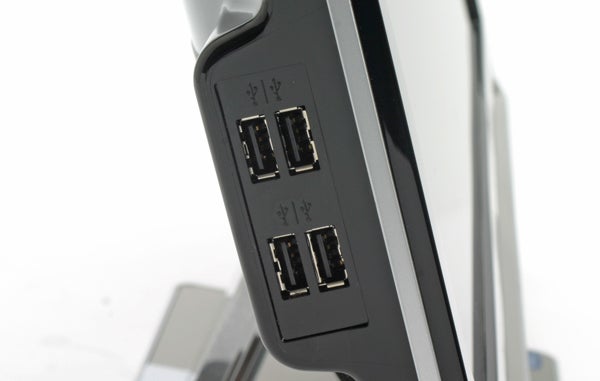 The OSD is BenQ’s usual colourful affair, offering plenty of
options for fine-tuning while remaining straightforward to navigate through. There’s
a handy list of presets, including Movie, Standard, Eco, sRGB, Photo and Game
presets. None of them are configured ideally, with most setting the brightness
way too high. Thankfully though, they’re all adjustable to some extent, so they
can be set up to be truly useful. It’s interesting to note that none of them
activate Dynamic Contrast by default, leaving you to activate it, with a choice
of how intensive it is. To be honest we would leave it off, as it’s not needed in this case and can lead to noticeable jumps in the level of brightness.

We’re usually a little wary of inbuilt monitor speakers, but
we’ve come across a few good examples over the years. Unfortunately, the EW2430
isn’t one of these. Its subtly integrated 2W speakers lack volume and bass,
and they’re not maestros in terms of clarity or fine detail either. They’re
just about usable, but frankly belie the monitor’s ‘Room Theatre’ entertainment
centre ethos, as you will want to hook up external speakers or some good
headphones to get decent quality in movies, games, and especially music.

BenQ is a staunch supporter of AOU’s VA panel technology
(logical as BenQ owns shares in the panel manufacturer), and that hasn’t
changed with the EW2430. Generally, VA is inferior to IPS (as found in the
likes of the Dell UltraSharp U2410, most notably in the viewing angles department.
But it does offer the potential for faster response times and is vastly
superior by default to TN. As to the BenQ EW2430 specifically, the positives outweigh the negatives by a
significant margin. 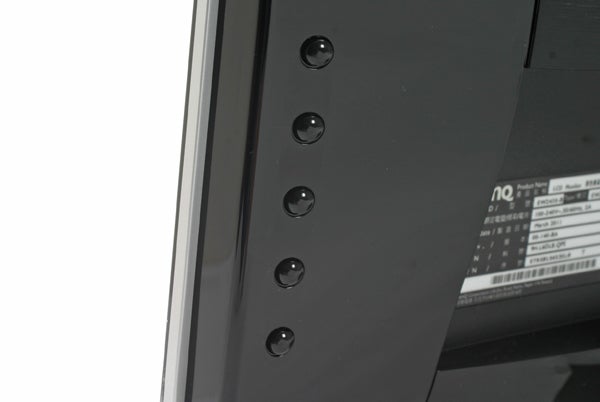 As usual, BenQ’s contrast claims are a little overstated,
to say the least. 3,000 native and 20 million (yes, actually 20,000,000)
dynamic is the stuff that even plasma televisions can only dream of, and
largely meaningless. However, contrast really is very good, and colours are
vibrant without compromising on accuracy.

The otherwise even backlighting is too strong, even at its
lowest levels, for blacks to be perfectly black, but you’ll only notice if you’re
staring at a completely dark screen or when paying close attention to the black
bars in movies. Tellingly, the EW2430 not only manages to distinguish every
dark shade in our greyscale test, but did so without losing detail in whites.
This is something that even the best TN-based monitors struggle with, and means
you’ll see every last detail in movies, games and photos. 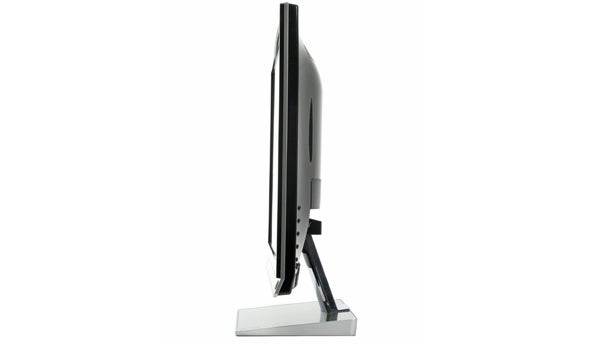 Things are helped along by the lack of backlight bleed and some
decent, if not exactly flawless, viewing angles. Both vertical and horizontal
viewing is inevitably weaker than IPS, but stronger than almost every TN we’ve
come across (with the exception of the amazing panel found in the Samsung Series 9 900X3A), and certainly adequate for daily use.

Vertically, colour shift becomes visible only from the top,
which is the least likely viewing position. Horizontally we do see some loss of
contrast and colour fidelity at around 165 degrees, but this is already more
than you would usually be sitting at. Basically, you can happily view this
screen with a group of friends or family without any issues. One minor point
worth noting for imaging professionals is that there is incredibly subtle
contrast shift even when sitting fairly centrally, though it’s so slight it’s
barely noticeable.

The one area where TN does tend to be superior is in
response time. With an 8ms grey-to-grey quoted response time, it’s no surprise that BenQ’s
EW2430 does suffer from just a little more trailing in games than displays
using the fastest panels (like the company’s own 2ms XL2410T). Even with the EW2430’s overdrive setting turned up to
maximum, the effect is still somewhat present. However, for all but the most hardcore FPS gamers it’s still fast enough. 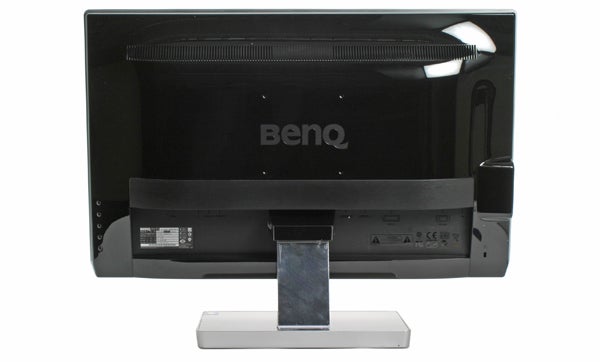 Sharpness is excellent, though we did note the same
red-bits-in-white-text phenomenon as we encountered with Dell’s older UltraSharp 2408WFP, which also used a PVA panel. The only other negative is
some severe banding across both light and dark ends of the scale, which is
visible on any medium-sized colour gradient. The screen’s finish is semi-matt, meaning
you’ll only see minimal reflections even with dark images.

There’s definitely some serious competition at the budget
end of the non-TN panel market, but for a mere 176.68, the EW2430 stands head
and shoulders above its rivals. Image quality, connectivity and response time
are far ahead of the £200 Samsung SyncMaster F2380, though if you want adjustability the Samsung’s still
the better option. 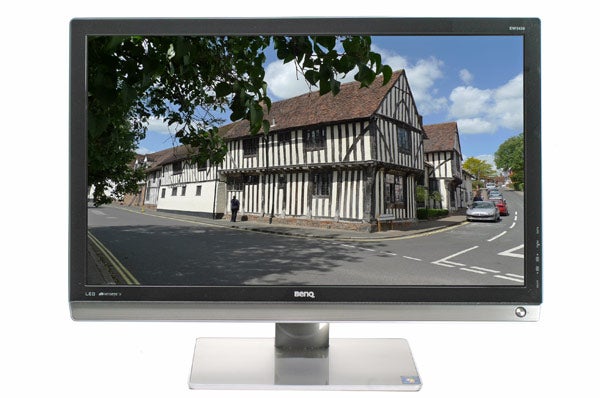 BenQ’s own VW2420H is a likelier rival, costing £10 less and sporting a slim frame.
However, given its fatter sibling’s integrated power brick, improved image
quality, build and connectivity, again we feel the EW2430 is the stronger
candidate. It’s not going to satisfy demanding imaging professionals or hardcore
gamers, but when you’re getting this kind of value it’s not fair to expect it
to.

BenQ’s 24in EW2430 is an attractive and versatile display
that offers build, connectivity and image quality far above its class, and
hammers yet another nail in the coffin of inferior TN monitors. It’s not
without its weaknesses – including limited adjustability, poor speakers and a
few minor image quality hiccups – but these are easy to forgive considering its
bargain price. All told, it’s our new bargain monitor champion!