Given BenQ’s recent troubles, I wasn’t too sure I’d ever get to see the new T700 7.2-megapixel touch-screen ultra-compact. I took a look at its more conventional sibling the X725 back in June, and a couple of other models before that, but it looked like the company’s attempt to squeeze into the European digital camera market was about to come to a shuddering halt in the midst of executive financial shenanigans, corporate re-brandings and the transfer of its digital camera manufacturing to the little-known (in Europe at least) Taiwanese company Ability. It has to be said that this transfer doesn’t bode well for the future quality of BenQ cameras, since Ability itself manufactures an undistinguished line of low-grade generic cameras for the OEM re-badge market, but at least for now we’ve got the T700 to look at. 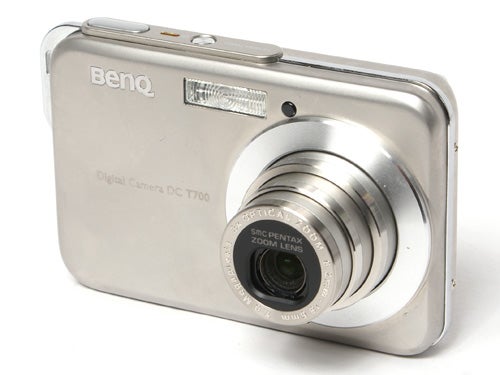 However on closer inspection, it quickly becomes apparent that we’ve seen most of the T700 before. With its flush-folding 3x zoom Pentax Sliding Lens optics and its 3 inch, 230kp touch-screen monitor, is a close cousin of the Pentax Optio T30 which I reviewed two months ago. And when I say close cousin, I mean very close, in the way they mean it in some of the more rural parts of America’s deep south. 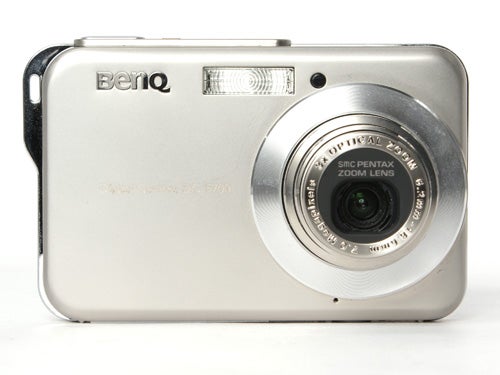 At least it doesn’t have buck teeth and a banjo. From the front at least the T700 is virtually identical to the X725, with a stylish and extremely slim stainless-steel case, available in black, red, white or the silver model shown here. The camera’s official measurements are 91mm x 59mm x 16.9mm, although as usual the actual thickness, including the monitor surround and lens bezel, is a little thicker at approximately 18.5mm. This is still very thin, and BenQ’s claim of “The world slimmest 3-in touch screen camera” is justified. It’s thinner than the Pentax T30, but only by around half a millimetre. Its weight of 120g minus battery is very light, but is in fact the same weight as the Pentax.

This similarity of course means that the T700 will be competing in exactly the same market as the £145 Optio T30, which puts it up against the likes of the Casio Exilim EX-S770 (£180), Nikon CoolPix S500 (£160), or Canon IXUS 70 (£170). Like other BenQ cameras, the T700 is only available from a few outlets in the UK, but if you can find it you’ll probably pay just under £140 for it. To be honest, I’d have to say that anyone who is looking for a 7MP 3x zoom compact and likes the idea of a touch-screen interface will probably go for the much more widely available Pentax T30 instead, or even the T40 which is sure to be announced some time soon. 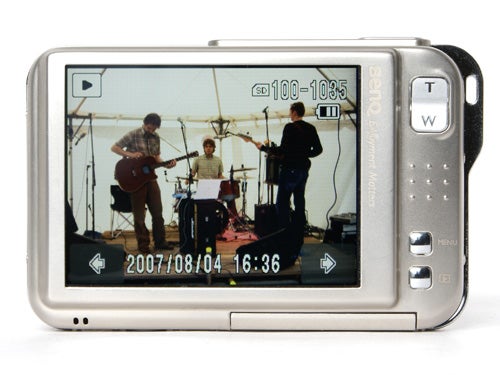 It’s a pity, because the T700 is actually a fairly nice little camera. Build quality is excellent, it looks great and it is extremely easy to use. Despite the size of the screen, the lack of external controls means that there’s plenty of room on the right hand side to hold the cameras securely. The only controls are the menu and playback buttons, the on/off button and shutter button, and the zoom control. This is a rather unresponsive rocker switch, and the zoom mechanism itself is slow and jerky. It is stepped, with just six large jumps between wide and telephoto. It’s also worth noting that the screen is highly reflective, presumably because of the touch-sensitive surface, making it very difficult to use in bright sunlight. 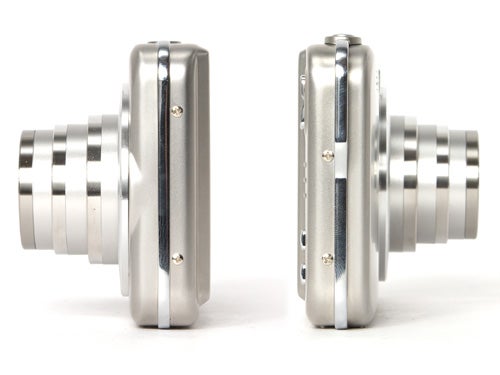 The touch-screen system is very quick and responsive, and the various icon menus are simple and logically laid out, although a ‘back’ button would probably have been a useful feature. The menu isn’t exactly the same as the T30. It is somewhat simplified, and the T700 has a slightly lower specification. Although it has the same shutter speeds and the same scene modes (including Frame Composite mode!), it only has an ISO range of 80-800, which is much less than the T30’s 64-3200, and high-ISO noise control is clearly a lot worse.

In terms of overall performance the T700 shows its budget camera heritage. Start-up time is very slow at well over four seconds, and in continuous shooting mode it averages around one frame every two seconds, and that’s with a high speed memory card. It is another of those annoying cameras with no audio cue to let you know when it’s taking shots in continuous mode. In single shot mode it is even slower, with a cycle time of around five seconds, and slightly longer if the flash is used. This is odd, because the wide-area AF system is actually fairly quick, and I suspect this is another Pentax component. Low light focusing however is another matter entirely, and is a real problem. It fails to focus in even fairly moderate light, and the lack of an AF assist lamp means that it cannot focus at all in the dark. Another performance issue is the battery life. The T700 is powered by a very small 720mAh battery, even smaller than the 740mAh cell in the Optio T30, and the charge level indicator was down to one bar out of three after only around 70 shots. 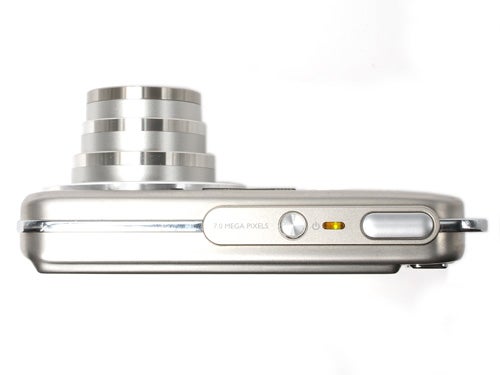 Actual image quality is, not surprisingly, almost identical to the Optio T30. The Pentax Sliding Lens System, which has been around since the original Optio S in 2004, is still a pretty good lens by ultra-compact standards and performs well here, producing some barrel distortion at wide angle but good overall sharpness and better than average edge and corner sharpness. It’s possible that the T700 has the same CCD as the T30 as well, because the colour rendition and level of detail are pretty much indistinguishable, and good for a seven megapixel camera. The only fly in the ointment is the noise issue I mentioned earlier. Image quality is only good at the lowest ISO setting. There is some colour speckling visible even at 160 ISO and it gets progressively worse as the numbers get higher. 800 ISO is unprintable. I would say this is a pity, and spoils an otherwise good camera, but the real pity is that with such poor distribution in the UK hardly anyone will notice. 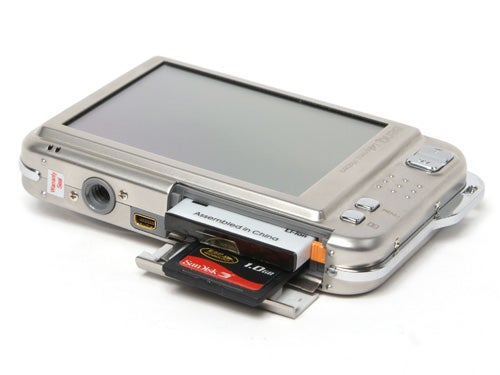 The BenQ DC-T700 is a well made and stylishly designed ultra-compact camera, sharing many of the same features as its brand-mate the X725 and the Pentax Optio T30, including its lens, sensor and 3-in touch screen interface, which should be an advantage, but slow performance, poor low-light ability and serious image noise problems make the Pentax offering a better choice. The limited UK availability is also a major problem. 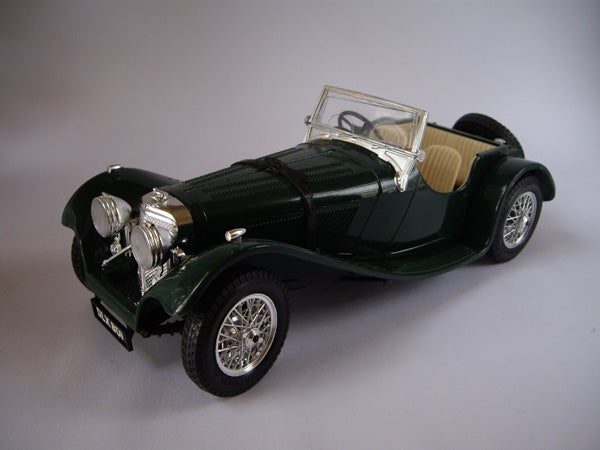 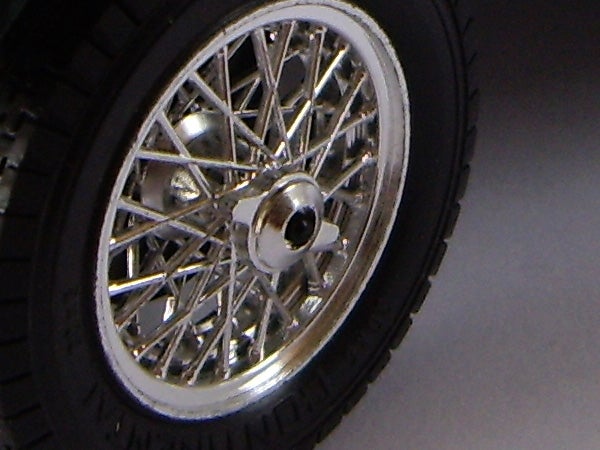 At the minimum 80 ISO the image quality is very good, with excellent detail and smooth colour reproduction. 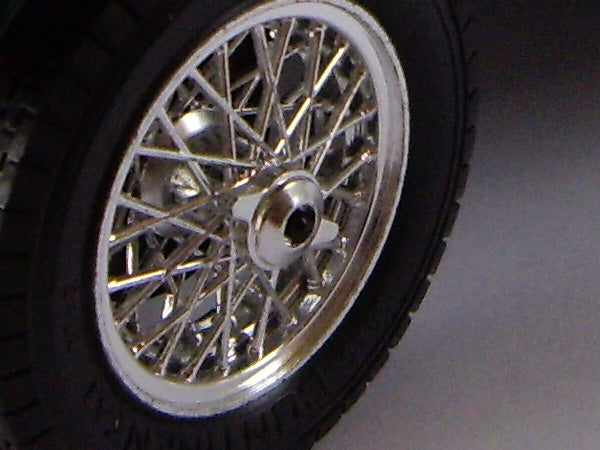 At 160 ISO there is already some colour speckling in the mid-tone areas. 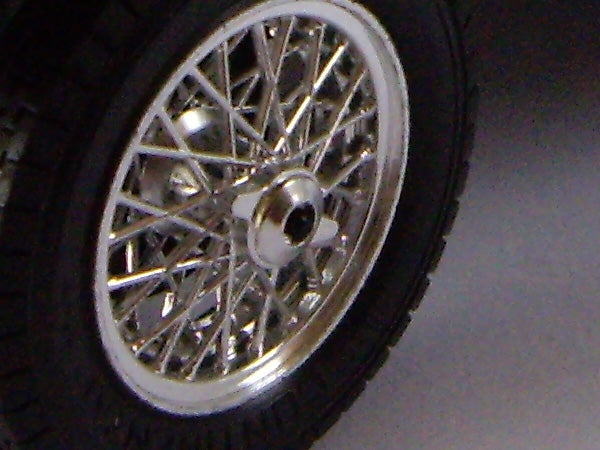 At 320 ISO the image noise is very noticeable, and some detail has been lost. 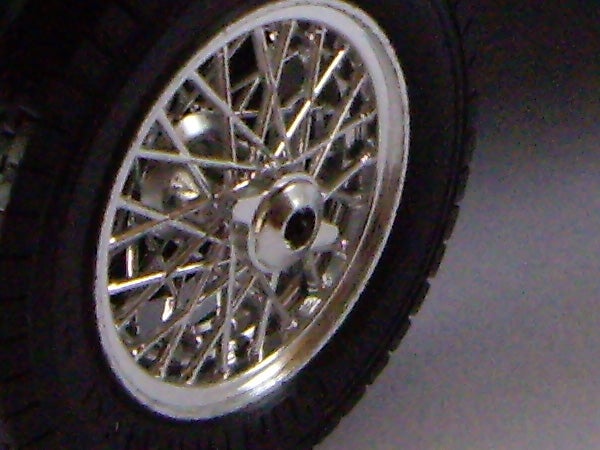 Up half a stop to 400 ISO and the noise is worse still. 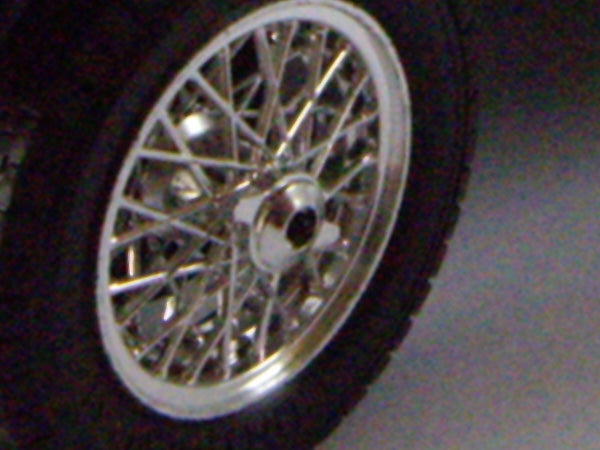 Picture quality at 800 ISO is very poor, with significant loss of detail. 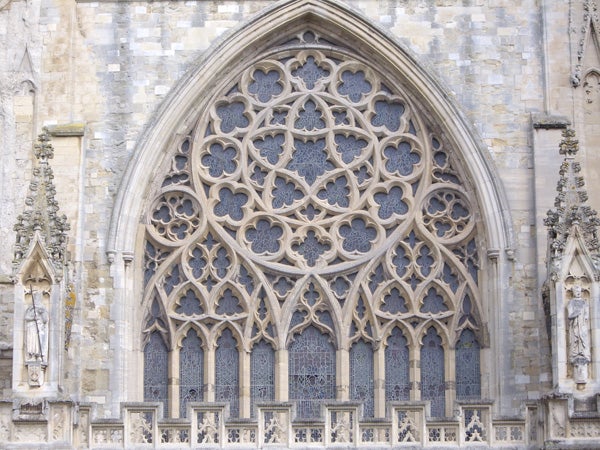 Here’s the usual shot of Exeter Cathedral’s West Window for detail comparison. I take this same shot with every compact camera I test. Click on the image to see it full size or look at the 100 percent crop below. 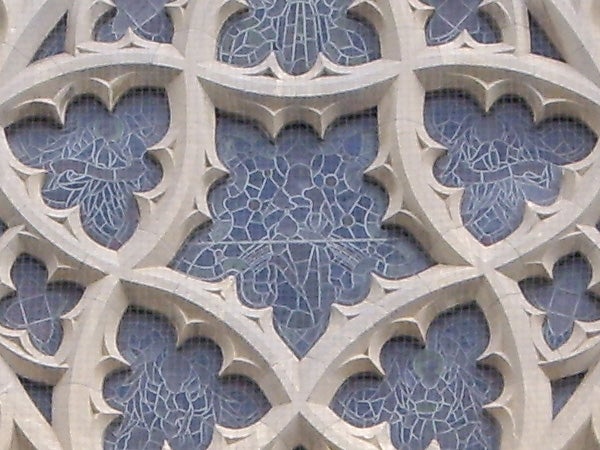 Image quality is about the same as the Pentax T30, in other words about average for a 7MP compact. 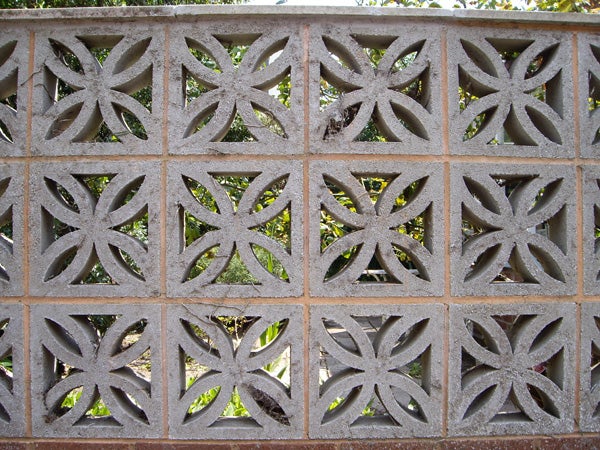 The Pentax Sliding Lens System produces some barrel distortion at the wide-angle end, but it’s not too bad and the overall sharpness is good. 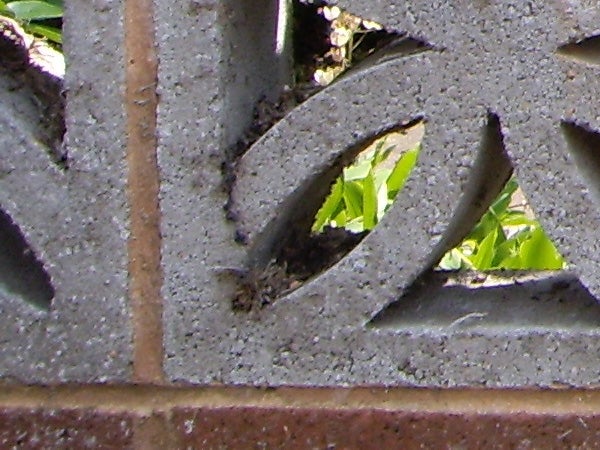 This full-res crop from the above image shows good corner sharpness. 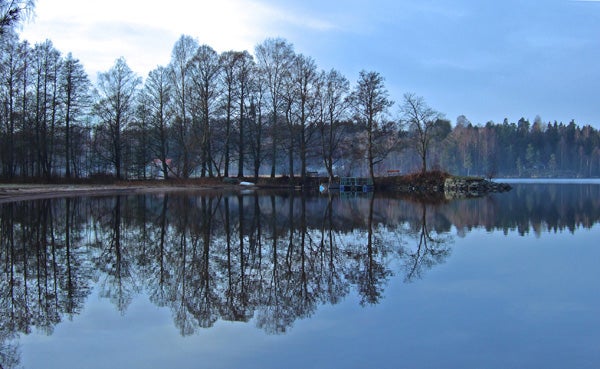 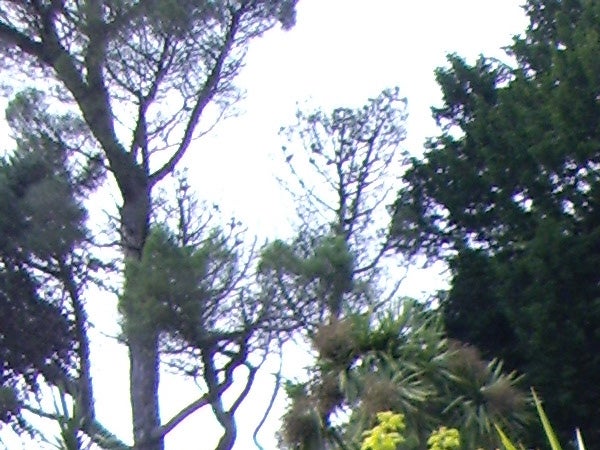 This is a crop from the top left of the above image, showing some purple fringing against the highlights. 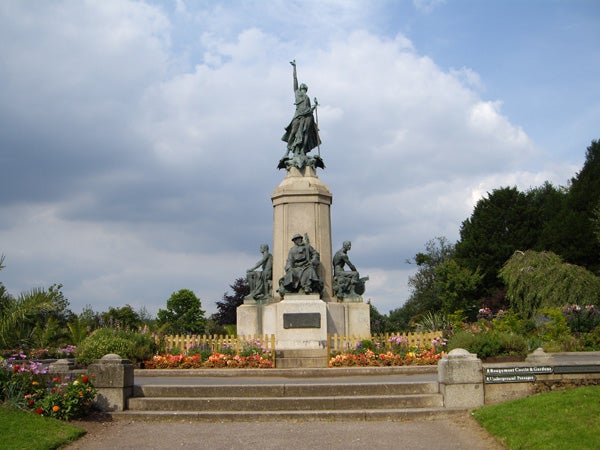 This was taken at the wide-angle end of the zoom range, equivalent to 37.5mm on a 135 camera. 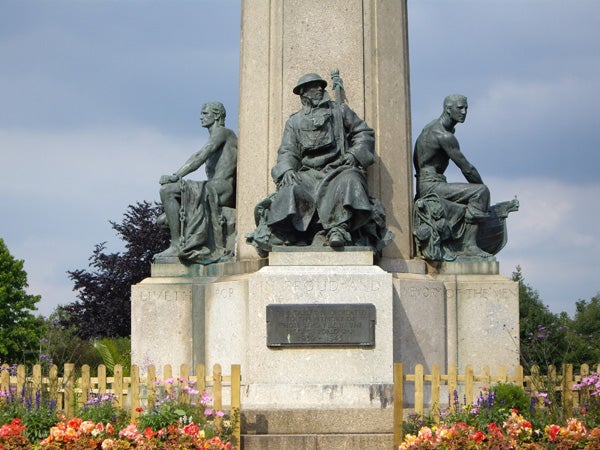 Taken from the same spot as the wide-angle shot, this shows the full telephoto range, equivalent to 112.5mm. 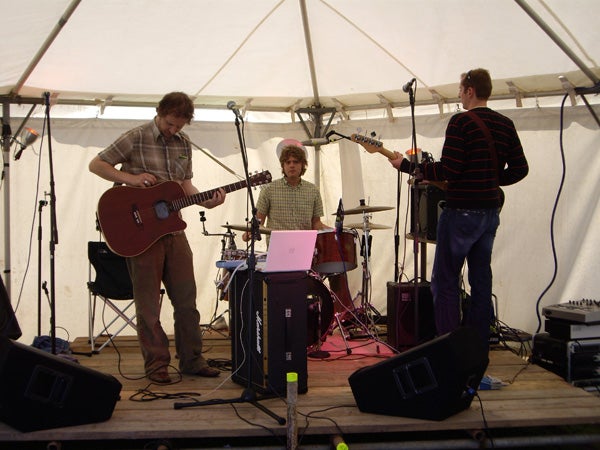 With a little fill-in flash the T700 works well indoors as long as the light is good. 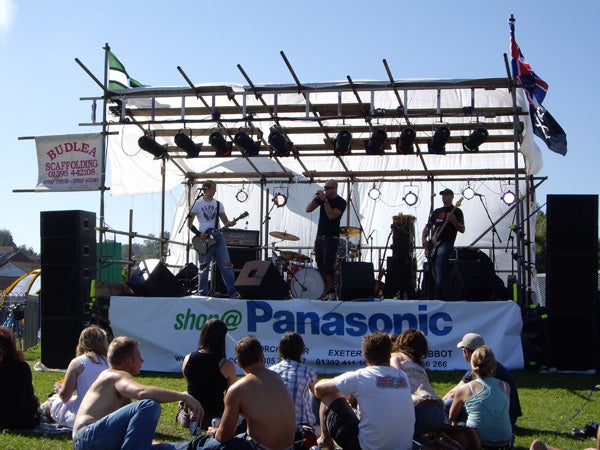 The highly reflective monitor is difficult to see in bright sunlight, but the results are good.