When is a game that the developer behind it has looked to make extremely difficult simply too hard to take on? Despite its friendly, pixel-art stylings and its cute lead – a white blob with a sailor’s hat on – Beneath the Lighthouse is an intentionally tricky beast, a game where the slightest wrong move results in death and, conversely, managing to pull off a stage without losing a life triggers a brief rush of elation.

When the latter increasingly becomes a rare occurrence the further you get into the action, however, is playing the game in question actually all that much fun?

Beneath the Lighthouse is, like most of the best mobile games, simple to pick up, even if completing it can be something of an ordeal. The idea is to guide the game’s aforementioned white blob (a young lad, if you need context, searching for his lost grandpa) through a series of circular levels where your only input is to revolve the world around him, causing him to react to the shifting gravity around like a ball in a particularly malevolent pinball machine. 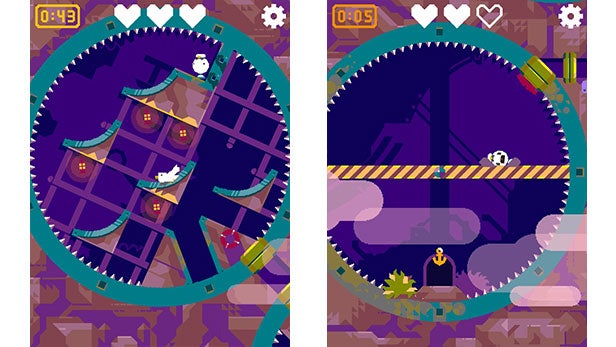 Malevolent because much of what resides inside these circles with our boy is seemingly out to get him. Spikes are the number one offender, taking a life upon contact and lining most of the edges of the stages and more besides. Their presence means that progress throughout Beneath the Lighthouse is, at least on your first run through, especially slow. Rather than utilising the iPhone’s accelerometer, rotating the levels is a case of simply moving them with the touch of your finger, with most stages requiring delicate and often prompt changes of direction in order to keep the boy away from harm.

Other elements such as handy platforms that only appear when a finger is held down upon the screen also soon come into play, serving as vital resting points or barriers from danger when activated, but disappearing entirely when contact with the screen is cut.

The levels themselves are actually made up of multiple different circles, with Beneath the Lighthouse splitting up the challenge so that if you die in the second part of the stage, for instance, you aren’t sent straight back to the beginning – an important distinction, if only because of the game’s ticking clock. Indeed, for purists, success in Beneath the Lighthouse won’t just be about making it to the end of the level without dying, but doing it in quick time as well, with bronze, silver and gold medals on offer depending on how speedy and efficient your progress through the stage in question is.

For most who attempt Beneath the Lighthouse, however, the prospect of medals will seem fanciful. So tricky are some parts of play that even knowing just the route you’re meant to take through the maze like levels (let alone actually pulling it off) is an incredibly difficult undertaking. As stated, however, this level of frustration is no doubt intended: developer Nitrome has a reputation for making its games as difficult as it can, and Beneath the Lighthouse is the kind of release that can have you stuck on one particular part of one particular stage for minutes aplenty. 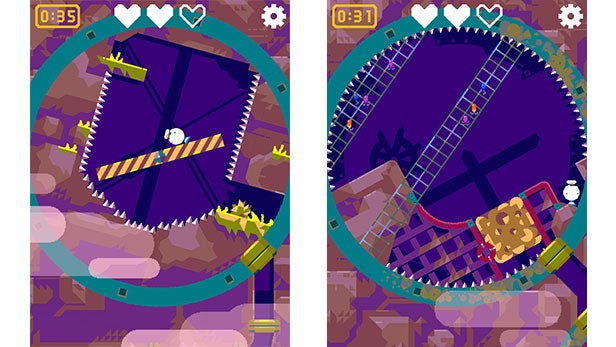 The question, then, is whether all the effort is worth it, and opinions will no doubt differ. For us, though Beneath the Lighthouse is utterly charming and there are arguably far too few games on mobile that really push players (owing to the device’s largely casual following), Nitrome’s latest is missing a spark, a little bit of something special to truly make it stand out from the crowd, with its spin on the physics based puzzler having the feel of a game that should have come out two or perhaps even three years ago. It just doesn’t feel like the instant classic it presents itself to be.

It all means that, while Beneath the Lighthouse is most definitely not a bad game, by the same token it doesn’t feel like one all too many folk will be playing by the time 2016 rolls into view, either. Beneath the Lighthouse just doesn’t offer any real distinction from the scores of similar games in the physics genre that have launched on iOS or Android during the last 7 or so years, instead playing out without really making a mark beyond its devastating difficulty.

Verdict
Intentionally difficult, Beneath the Lighthouse’s physics-based play is utterly charming and especially easy to pick up, though this particular case of gravity games doesn’t feel distinctive enough to push it ahead of the leagues of similar games that have hit mobile over the years.