What is the BEM Kickstand?

The BEM Kickstand is a portable projector that supports wireless connectivity and comes in a startling patent-pending ‘fold out’ design with an incorporated carry handle.

It’s not often we feel compelled to use the word ‘genius’ on Trusted Reviews, but it’s at least hovering on our lips as we run our eye over the BEM Kickstand HD ultra-portable projector.

We’ve never seen anything like it before, yet everything about its eye-catching design feels so right that you instantly find yourself wondering why nobody else has thought of it before. Which surely has to rate as a form of genius, at least. 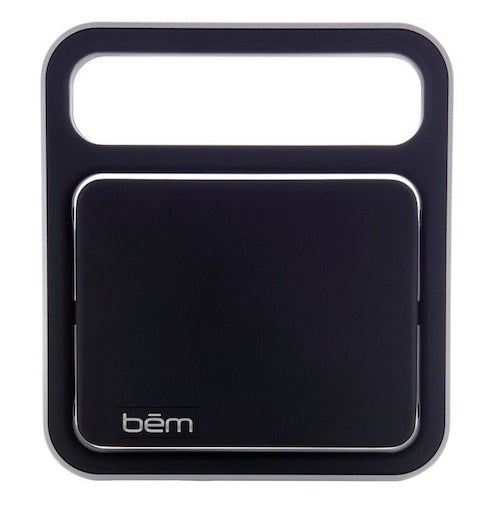 The basic concept of the BEM Kickstand is to provide a projector that’s easy to carry round, robust enough to take some hammer while on the road and, most important of all, be incredibly easy to set up and adapt to the wide range of rooms and environments it’s likely to find itself in during its ‘workhorse’ life – a life which could potentially/hopefully cover a mixture of domestic and work scenarios.

The portability boxes are ticked by the way an outer frame around the projector when it’s lying flat, and that forms a convenient carry handle. And since this outer frame is made from brushed anodised aluminium it provides good levels of protection from knocks and scrapes, as well as having a touch of visual class. The main projector body, meanwhile, has a pleasant rubberised finish that also protects its top and bottom edges.

The easy set up boxes are ticked – in bold, then underlined… – by the way the frame attached to the projector opens out from its flat in-transit profile into an easel-like stand when you want to use the projector. The projector hangs from a pivoted junction at the heart of the easel, and rather brilliantly can be rotated up and down on this pivot to lift or drop the image until it hits the correct place on a screen or wall.

This outstanding bit of thinking means you can have the projector set up in a matter of seconds – especially as the projector also carries an effective, simple to use keystone correction system for straightening the image’s edges when the Kickstand is projecting at an angle. 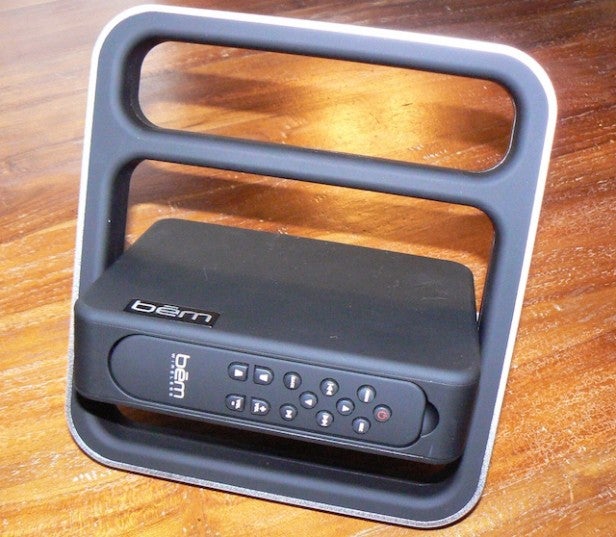 We’re not done with the brilliant design touches yet, either. For the remote control BEM supplies with the Kickstand is designed to slot perfectly into a groove on the projector’s front edge, so that as well as making it much easier to transport safely than a normal, ‘disconnected’ remote control, the remote provides a thick layer of protection over the lens.

If there’s any problem with the Kickstand’s inspired design, it’s that by the time you’ve taken the outer frame into account you’ve got an overall chassis that’s quite large by the standards of the ultra-portable projection market. Certainly it’s not something you can put in a pocket. But the brilliance of everything else about the Kickstand’s design more than compensates for this one issue – as well as hitting higher levels of geek chic than any other projector we’ve seen.

The Kickstand’s usefulness doesn’t stop at its design, either. Its connections include both HDMI and USB options, for instance, and you can also get content into it wirelessly via BEM’s optional ‘Stick’ wi-fi adaptor.

Its 400 ANSI Lumens claimed light output is reasonably high for a DLP ‘Pico’ projection engine too, enabling it to produce images BEM reckons can go from just 9 inches up to 90 inches (with a 10 foot throw distance needed for the 90in image).

The projector is both PC and Mac compatible too, and it’s equipped with a 2x2W stereo audio system to save you from having to track down an external audio system when you’re watching anything with an audio track.

Of course, having sound coming from a little box some distance away from the screen where the pictures are appearing is hardly going to be an ideal solution for movie buffs – but if the sound it produces is powerful enough it might pass muster for gaming, presentations and sports event viewing.

The Kickstand’s use of a DLP Pico light engine delivers another significant practical advantage, in that its LED lights are rated to last at least 20,000 hours –the lifespan of the projector in other words. There’s no need to invest in replacement lamps after 2000-5000 hours like you have to with normal (usually larger) types of projector.

The use of a Pico system also means the projector will consume less power, and it supports ‘instant off’ functionality whereby you can switch it off and unplug it pretty much simultaneously, with no need to wait for the lamps to cool down before you unplug it.

The Kickstand delivers a 1280×800 native resolution – enough pixels to earn it HD Ready status. Though one little point to stress to movie lovers is that this pixel count equates to a native 16:10 aspect ratio rather than the native 16:9 ratio used by widescreen TVs and widescreen movie projectors.

While describing the Kickstand’s remarkable design we already covered how incredibly easy the projector is to set up despite not having any optical image zoom or vertical shift tools. In fact, it’s the easiest projector to physically set up we’ve ever seen – ideal for a portable model.

The Kickstand’s promotional blurb (as featured on the Kickstarter campaign BEM created for the Kickstand last year) is keen to stress just how flexible a gadget it is, suggesting that it can be used for playing movies, showing photos, delivering presentations or playing games by everyone from business travellers and tech enthusiasts to presenters, gamers and ‘urban dwellers’ (whatever they might be).

With this in mind, though, we felt a bit disappointed by the amount of picture calibration options it places at your disposal. There’s no colour management system, no minimal gamma control, and only a pretty limited number of picture presets – which don’t include, strangely, either Cinema/Movie or PC options.